Italy’s Next Generation Rifle: The ARX 160 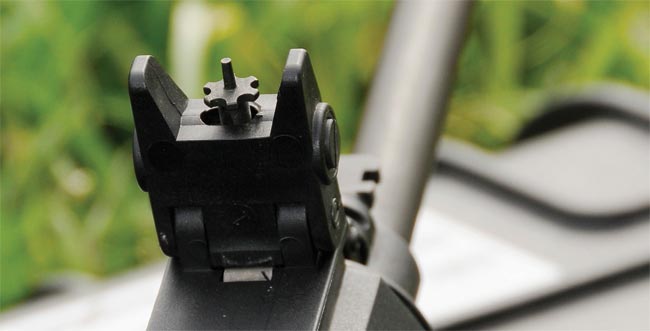 With the stock folded to the side of the weapon, we can access the disassembly lever.  Pushing on the lever, and rotating the selector past the “safety” mark, we can pivot open the lower, and remove the bolt carrier assembly.  We’ll also find that there is no “hinge,” simply a massive curved notch right in front of the magazine well.

The stock of the weapon is obviously in-line with the barrel, and it is permanently fastened to the upper receiver with a hinge on the right side while the latch button is on the left.

The injection molded upper receiver contains many metal parts and embedded subframes, such as structural reinforcements, sling loops, and metal backplates where Picatinny rails are bolted on.  There are no metal guides for the bolt carrier, which rides in the receiver with metal to polymer contact only.

The smooth and streamlined appearance is not only due to “Italian Styling,” it also serves a purpose.  Learning from other Polymer based weapon body designs Beretta engineered the weapon with constant curves to eliminate stress points which could lead to cracks.

The top of the upper receiver is fitted with one continuous 7075 alloy Picatinny rail.  At the front of the fore-end, right behind the gas block, on both sides we find a number of cooling slots and two more small Picatinny rails, plus one more full length rail is present at the bottom.  The latter is not fully 1913 standard, as it ends with a “T rail” specific for fastening the single shot GLX 160 40mm grenade launcher, and is normally protected with a plastic cover when no accessories (i.e. GLX160, VFG, or tactical flashlight) are mounted. 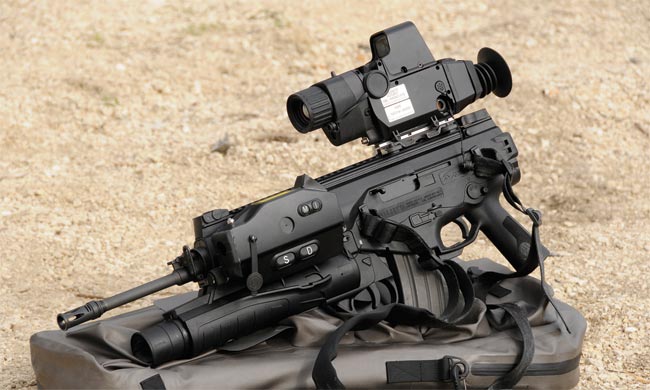 Foldable sights are standard issue.  Made of the same polymer as the receivers, the sights are adjustable.  The front sight post is adjustable in windage and elevation and the rear peep sight has a six pre-set position disc with dialed distances from 100 to 600 meters.

The sights mainly serve as BUIS, as Italy will field the ARX 160 with an optical primary sighting system: the Aimpoint ACIES, a custom version of the M2 CCO.  Being the ARX 160 is the weapon for Italy’s “Soldato Futuro” program (the equivalent of USA’s Land Warrior program); a host of hi-tech aiming systems (including NVG, Thermal, LLTV and Image Fusion technology) are also available, although in prototype form.

The weapon has six sling loops: two on each side, one on the stock, and one on the gas block.

The polymer stock with a rubber buttplate resembles a large, inverted “L” and is composed of two parts that can slide one inside the other.  It is hinged to the receiver, and when folded (pressing on a latch similar in function to the one used in the SIG 550) it does not interfere with the controls or the ejection port, so the weapon remains fully useable.  The length of the stock can be adjusted by collapsing the buttstock in one of 4 positions spanning 80 mm.  The buttstock can also be completely removed revealing a small tubular compartment for batteries or cleaning kits.

The magazine well, in the lower receiver, is very peculiar.  To release the magazine, the ARX 160 offers an ambidextrous and fenced button (similar to the one used in the AR 70/90) on each side of the receiver, and an additional button in the base of the trigger guard.  Pushing right up with the thumb releases the magazine.  This button is also fenced to prevent unwanted activation.  The same button is also the hold open.  When the bolt carrier group locks back on an empty magazine, the button will project inside the trigger guard, and upon magazine change, pressing down with the index finger on the button will release the bolt.  It is actually a lot easier done than said.

The magazine is totally compatible with the universal STANAG 4179 standard (M16 magazines), and holds 30 rounds.

The pistol grip is of very simple design with a comfortable inclination and a moderate grip.  It integrates a small compartment, closed with a trapdoor, for the issue cleaning kit. 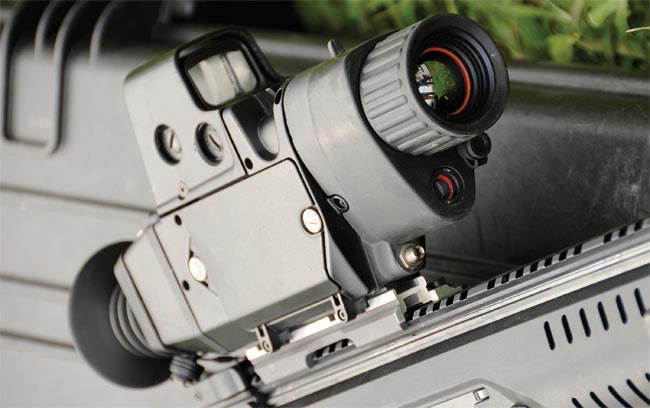 Future improvements include the possibility to change calibers, swapping barrel, bolt, lower receiver and magazine.  It is still some 70% of the gun, and it may be viable only for some agency large-scale inventory scenario, since the serial number is engraved on the upper receiver on a steel block embedded in the polymer and readable thru a small window on the right rear portion of the receiver.  In addition to 5.56×45 NATO, Beretta has announced that the ARX 160 may be also available in 7.62×39 and 6.8×43 (6.8 SPC Remington).  Feasibility studies of chambering the weapon in 5.45×39 mm (M74 Russian cartridge) are under way.  Last but not least, a “Heavy” version is undergoing prototypal stages, chambered in 7.62×51 NATO, as this seems to be the trend in the industry and the market (M16 and SR25, SCAR L and H, HK 416 and 417).

The weapon is well balanced though just a bit muzzle heavy.  Once we adjusted the stock, cheek weld was perfect.  Aiming using both optical sights and the provided fixed sights is natural and comfortable.  Trigger reach is satisfactory for small and medium hands though it may be a bit short for operators with very large hands.  The plastic trigger shoe is wide and smooth.  Feedback is good both in aimed, accurate fire and in full auto.  Controls are easy to reach with the firing hand’s index finger and thumb without having to change position.

On a tactical magazine change, the weapon offers various methods to release the bolt.  Pulling on the cocking lever, pressing the hold open button inside the trigger guard, and slamming the rifle on the shoulder (works real good if you wear SAPI plates) as the bolt will move back a fraction of an inch and the bolt catch will disengage.

Rapidly shouldering the rifle from a low standby to the natural aiming point is fast and comfortable.  The sight picture is perfect after a single familiarization session.

The trigger is smooth and predictable, and has a very crisp let off with minimal overtravel.

At this time, the ARX 160 has been thoroughly tested only in an Italian military proving ground.  Reports credit the weapon with performance and MTBF comparable to the HK G36.  Design and engineering of the weapon was refined following advice and feedback coming from actual users, serving in the various branches of the military that will most likely adopt the new ARX system as standard issue in the near future.

Samples have been sent abroad and a few are present in United States now for testing and evaluation.

The ARX 160 is a very flexible and innovative assault rifle, featuring many surprisingly simple and intelligent engineering solutions that allow the weapon to be easily adapted for the job.  Maintenance of the system appears to be quite straightforward, and the manufacturer claims the weapon to be able to function even without lubrication.  As for all things, time will tell if the ARX 160 will be a milestone in firearms development.  Our impression is that Beretta managed to jump ahead with what, for all accounts, is a new generation of military assault rifles. 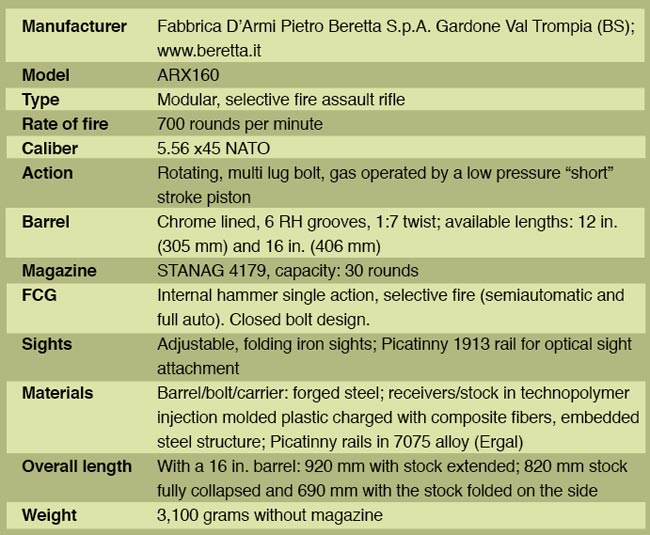 Tags: 2009, Franco Palamaro, Paolo Ortenzi (A.A.I.), V1N4, Volume 1
← The XM110 40×46 Day/Night Training Round
The Royal Thai Army Museum in Honor of His Majesty The King →
Distributed at trade shows worldwide, Small Arms Defense Journal is a bimonthly publication that focuses on small arms, accessories, gear for the soldier, new products, industry news, and defense trade shows. The first issue of SADJ was Spring 2009, which launched at the LAAD show in Rio de Janeiro, Brazil. SADJ (pronounced “sage”) is targeted toward military, law enforcement, and defense industry professionals. Our job is to reach these groups and tailor content to their interests while producing a publication that is applicable to an international audience.