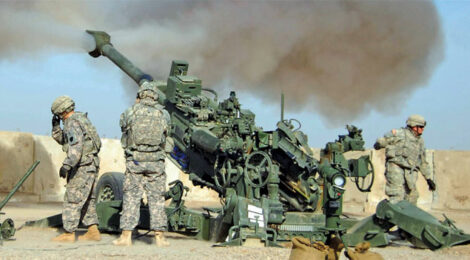 Weighing in at less than 4,200 kg, the revolutionary M777 is the world’s first artillery weapon to make widespread use of titanium and aluminum alloys, resulting in a howitzer which is half the weight of conventional 155mm systems.  As a result, it can be deployed by medium-lift helicopter quickly and beyond the reach of roadside bombs to otherwise inaccessible areas, extending its reach over the theater of operations.  Mike Smith, managing director of BAE Systems’ Global Combat Systems Weapons business commented:  “M777’s capability is proven in combat daily – being sling-loaded under helicopters and air-dropped in some of the most demanding operational conditions on the planet.  The M777 has passed every development and operational test in vital areas such as accuracy, consistency, operational flexibility and mobility.  There is no other modern howitzer which has been subjected to such rigorous examination, or been engaged in such unrelenting operational usage and regular deployment by airborne assets.”

The success of M777 on operations in Iraq and Afghanistan is reflected in a global interest in the howitzer.  BAE Systems is responding to a range of enquiries from countries wanting effective lightweight artillery support for rapid reaction and expeditionary forces.  BAE Systems’ facility at Hattiesburg, Mississippi, is responsible for final integration and test of the weapon system.  The prime contract management of the M777 program and manufacture and assembly of the complex titanium structures and associated recoil components are undertaken at Barrow-in-Furness in the United Kingdom.  The M777 effort is managed by the U.S. Army/Marines Light Weight 155mm Joint Program Office at Picatinny Arsenal, New Jersey.  BAE Systems contracts directly with non-U.S. customers for support, as with a recent $18m (£12m) Canadian support package covering the supply of spares and engineering support.  (baesystems.com)