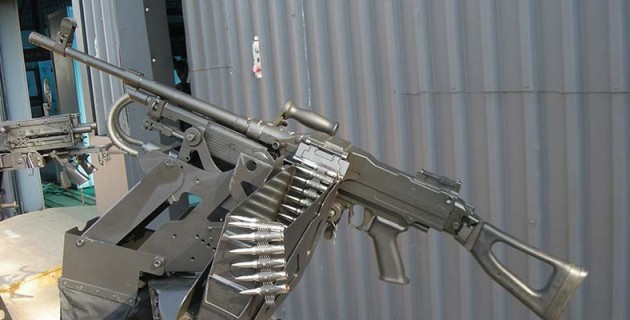 ABOVE: South Africa’s famous SS77 machine gun from Vektor has a venerable history, replacing the FN MAG as the General Purpose Machine Gun in South African service since the early 1980s. Caliber is 7.62x51mm (The “Mini-SS is 5.56x45mm) and is fed with non-disintegrating metallic DM style belts. There were a variety on display at AAD 2014, but this one in the military historical area outside was the best to get a picture of. Photo by Dan Shea, Courtesy Small Arms Defense Journal.

Africa’s strongest military trade show is undoubtedly the AAD show in Tshwane (formerly Johannesburg), South Africa. The show is a biennial five-day extravaganza, including an airshow the draws tens of thousands of guests from all around. The interests of most of our readers will be handled on the first three days of AAD, and if you’re setting up a booth there, remember that the civilian days will be filled with families and non-military, so play to the crowd. To some that will mean on Air Show day that they hide their products, to others, it will mean an excellent opportunity to win hearts and minds, and impress upcoming generations with their innovation and products.

That said, those first three days provide some of the best networking on the planet regarding military weapons and needs.

What it’s all about. On visitor’s day during the Airshow, this young man gets the feel of being behind “Ma Duece”- the M2HB .50 caliber machine gun. The look on his face says it all… Photo by Dan Shea, Courtesy Small Arms Defense Journal.

Twin M3 .50 caliber machine guns, as mounted on vehicles for anti-terrorist operations in the 1970s- to date. These were post World War II manufactured high speed machine guns that are in service with the right and left feed. Photo by Dan Shea, Courtesy Small Arms Defense Journal.

Chinese manufacturer Norinco had a large display, the second time the Chinese had filled many of the areas at AAD. This was one of the first showings of the Chinese three-barreled .50 Caliber machine gun. At first it appears to be a clone of the GAU-19, but on further inspection a large section appears to be missing- this is the fact that the Chinese weapon does not use a delinker-feeder, but rather presses the belt downward for forward stripping of the rounds. Without examining the links, it is only possible to speculate that the link is similar to the US M15 link used in the forward stripping, ill-fated M85 machine gun. Video shown at the Chinese booth showed a high rate of fire, and apparent reliability. Photo by Dan Shea, Courtesy Small Arms Defense Journal.

by Dan Shea on 27 March, 2015.
← Combined Systems expands non-lethal capabilities with more options from VENOM
OIP: Less Really Is More →
Distributed at trade shows worldwide, Small Arms Defense Journal is a bimonthly publication that focuses on small arms, accessories, gear for the soldier, new products, industry news, and defense trade shows. The first issue of SADJ was Spring 2009, which launched at the LAAD show in Rio de Janeiro, Brazil. SADJ (pronounced “sage”) is targeted toward military, law enforcement, and defense industry professionals. Our job is to reach these groups and tailor content to their interests while producing a publication that is applicable to an international audience.