Browse: Home   /   The Modular LMT MRP: The Rifle for Anything 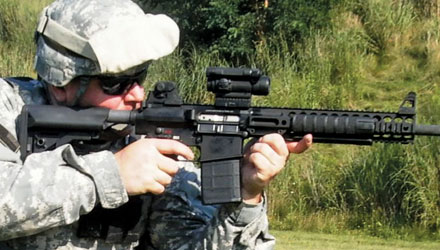 The Modular LMT MRP: The Rifle for Anything

Damon Bolding / 20 August, 2012 / Comments Off on The Modular LMT MRP: The Rifle for Anything / New Products, Reviews, Search By Issue, V4N2, Volume 4 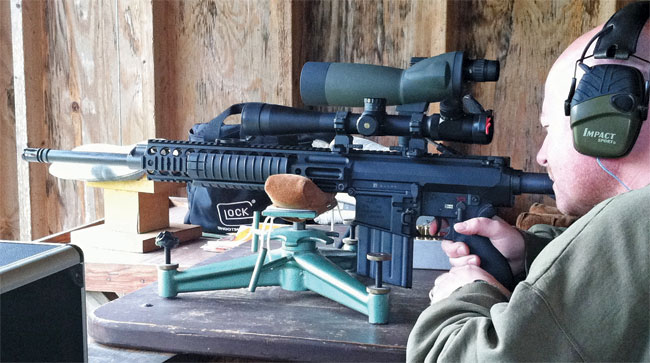 For the last 15 or so years, the AR-10 has seen a rebirth from the dust on the floor of the former Ordnance Corps.  With the lack of vision and judgment which would eventually be their demise and have their doors shut forever by Secretary of Defense Robert McNamara “Tomorrows Rifle Today” wound up being “Today’s Rifle Yesterday!”  It would be Gene Stoner who would resurrect the AR-10 from the dead with the assistance of C. Reed Knight, Jr.  With the introduction of the SR-25 sniper rifle the industry would experience a shift in what a sniper rifle really was.  The very foundation of it having to be bolt action to achieve sniper grade accuracy came into question with the SR-25, which has now led to other companies coming online with their own AR-10 type rifles.  The next company to follow Knights Armament Company would be Eagle Arms, soon to become ArmaLite, owned by former Army Ordnance Officer Mark Westrom, and the name AR-10 was back main stream.  Westrom manufactures outstanding 7.62x51mm AR-10 rifles in many configurations at some of the best prices for a rifle made with no compromises.  Westrom manufactures separate upper receivers to offer his customers to fire the new .338 Federal as well as the .243 Win. and .260 Rem. calibers.

Now we go to the next evolution of the AR-10 weapon system, a Generation 3 if you will.  The father of this generation would be a name that is very common on the military, law enforcement and commercial market.  A company which is an OEM manufacturer for some of the finest companies in the Defense business as well as directly for the U.S. government.  Mr. Karl Lewis, President of Lewis Machine and Tool (LMT) of Milan, Illinois the designer of the MRP.  Previous articles have been written on the MRP or Monolithic Rail Platform which Lewis introduced to the market in late 2003.  Lewis was the first to produce a true monolithic or 1-piece upper receiver.  Technically speaking, he still does.  There are two others referred to be as one piece uppers.  The upper produced by Colt Defense has a removable lower handguard, which only makes it two pieces and the ArmaLite SPR 1, which has one piece for the barrel assembly and continuous top rail, but the rest of the handguard is manufactured of different rail segments.  The LMT MRP is one piece all the way.  There is no removable handguard.  The grenade launcher and accessories mount directly to the rail, never touching the barrel.  What also sets the MRP apart from the rest is that the barrels can be removed and replaced within a minute or two by the user.  Not only do you have the ability to put a different barrel length or configuration you can also change calibers with the turn of two little bolts.  In the standard MRP you can go from 5.56mm to 6.8mm SPC or even to the .204 Ruger.  If the market should request it, the rifle barrels could also be chambered for 7.62x39mm, 6.5 Grendel, .499 LWR and 5.45x39mm.  Not only do we now have different barrel lengths and caliber but how about operating systems?  The MRP can be converted from a direct gas to a piston operated system by removing the barrel and changing out the bolt carrier and buffer.  The MRP is that modular, the same upper receiver for multiple barrel configurations, multi calibers and convertible operating systems. 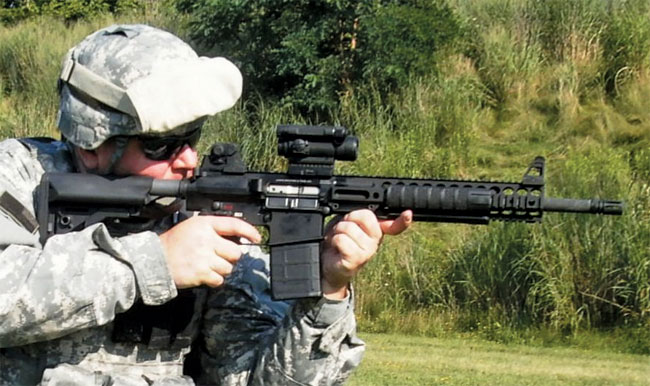 The LM308MWS has proven itself on the battlefields of Afghanistan with the British Army as the L129A1 Sharpshooters rifle. This rifle makes an excellent mid-range sniper rifle out to 1,000 yards depending on the skill of the shooter.

What we are focusing on here is the larger MRP based on the timeless AR-10, the LM308MWS.  This program began in 2009 when the British Ministry of Defense (MOD) put out an urgent requirement for a marksman rifle for use in the Global War on Terror in Afghanistan.  The Taliban were able to engage British soldiers at much longer ranges than the British troops could engage them with their 5.56mm L85A1 rifles.  Lewis was approached by Law Enforcement International of the UK and told about the requirement.  Lewis went on to develop his 7.62x51mm caliber MRP to compete for the prestigious contract with the British Army.  Already being the underdog, he was to compete with Knights Armament Company, Heckler & Koch, FN, Saber Defense and Oberland Arms.  These are companies who have much experience in the manufacturing of 7.62x51mm rifles.

Lewis redesigned his MRP to accept the 7.62x51mm cartridge.  The barrels were removable in the same fashion as the previous.  The rifle was required to shoot ball ammunition with precision accuracy, unlike the American M110 which is designed for M118 and M118LR match grade ammunition.  The original barrel length manufactured and chosen for the trial was the 16-inch barrel with a 1 turn in 11.25-inch twist which is ideal for the 147 grain Radway Green 7.62x51mm NATO ball round.  The 7.62 MRP does not have the unnecessary forward assist assembly but maintains the fired cartridge case deflector.  Quad Mil-Std 1913 rails with QD sling mounts on the front of the rail on the 3, 12 and 9 o’clock positions as well as the rear of the 3 and 9 o’clock rail.  The charging handle was modified to keep gases away from the shooters face by having the ends hang down over the sides of the charging handle.

The bolt carrier group originally was the standard M110-type, which is a chrome plated bolt and carrier.  The bolt was fired with a proof cartridge and then magnetic particle inspected.  After passing, the bolt was marked MP to signify passing the test.  The ejector is enhanced over previous designs; the spring is much longer giving more ejection force.  The carrier itself has a captive firing pin retainer pin which is an awesome enhancement considering it is the easiest lost part of the group.