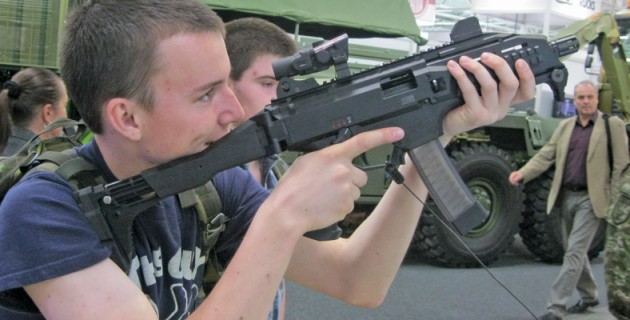 International Defence Exhibition Bratislava is organized every two years in Bratislava, the capital of Slovak Republic.  Under the auspices of the Slovak President, Prime minister and Minister of Defense, 140 companies and organizations from 21 countries came to exhibit theirs defensive equipment.

Almost a quarter of the exhibition hall was occupied by the Army of Slovak Republic, which concentrated on pyrotechnic equipment this year.  One of the most interesting pieces was the unmanned de-mining vehicle Bozena 5, which already served several  terms in Afghanistan and Iraq.  It can be controlled remotely from a distance of up to three miles and can withstand blast of 20 pounds of TNT.  Among other exhibitions, there were two pyrotechnic robots in action, one could try on a bomb disposal expert suit, and look over various examples of detected IEDs.

CZ805 Bren assault rifle (above) and CZ Scorpion EVO3 A1 submachine gun on display at the Ceska zbrojovka exhibit.

CZ 805 Bren assault rifle. Named after the World War II classic, it bears no resemblance to its historic namesake.

Czech Armoury (CZ) brought their new CZ 805 Bren assault rifle.  Named after the famous WWII light machine gun, it is in name only.  This Bren, however, has light alloy frame and is able to accept interchangeable barrels of 5.56x45mm NATO, 7.62x39mm and 6.8x43mm SPC Rem. calibers.  It is a gas operated weapon with breech locked by a rotating breech block.  The magazine has a capacity of 30 rounds and the rifle is able to shoot single shots, double shots, and fully automatic fire.

Another new gun exhibited by Czech Armoury was a submachine gun named after another famous CZ weapon, the SMG Mk.61 Scorpion.  The new CZ Scorpion EVO3 A1 is an all-purpose light automatic small arm in 9mm caliber, able to fire single shots, limited bursts and fully automatic fire from magazine with capacity of 20 or 30 rounds.

FN HERSTAL of Belgium was there and exhibited their futuristic assault rifle FN 2000.  Besides its sleek ergonomic shape, this gas operated rifle, locked by rotating breech block, has one serious advantage against other bullpup-style weapons.  Spent cases are not ejected right out of the breech; they are fed into a tube under the barrel from where they fall out forward.  Without any changes, this rifle can be fired from either shoulder without throwing hot gases and spent cases in the shooter’s face.  The gun’s selector switch allows only single shots and full auto to be fired with no short burst ability.  Another smart feature is the location of the grenade launcher.  The shooter can move his finger from rifle to grenade launcher trigger without changing his grip on the weapon.

Recon Robotics Company exhibited a reconnaissance robot Recon Scout XT that is reminiscent of “tractors” that young boys make from spools.  This tractor, however, can run up to hour through difficult terrain, overlooking its surroundings with black-and-white camera with 60° angle of view.  The camera is equipped with thermal vision that turns on automatically in low-light surroundings.  With a weight of 1.2 pounds, length of eight inches, matte black finish and mere 20 dB of noise, this little spy is easy to overlook.  Its tough titanium body allows it to be thrown up to 40 yards away, to be dropped from height up to ten yards, or to be thrown through window glass. It also contains 33 yards of cord, so it can be retrieved from explored holes.

Slovak republic’s Ministry of Interior brought an interesting display of weapons that were made by prisoners.  It was almost unbelievable that the displayed revolvers and submachine guns were manufactured in jail and not in a factory; but truly, they bore no marks of manufacturer.

Slovakian company Strazan exhibited an interesting design of a tracked vehicle.  Instead of classic two tracks, Land Rover Defender has four Mattracks track systems, one in place of every wheel.  Its top speed is 40 mph and climbing ability up to 49°.

Slovakian gun manufacturer Grand Power introduced a modified P7 D pistol with a clever invention – sophisticated combination of safety, decocker and action switch.  With safety lever in upper position, the weapon is safe.  With lever in the middle position, the pistol shoots in SA/DA mode.  Clicking lever down releases hammer (if cocked) and switches weapon into DAO mode.