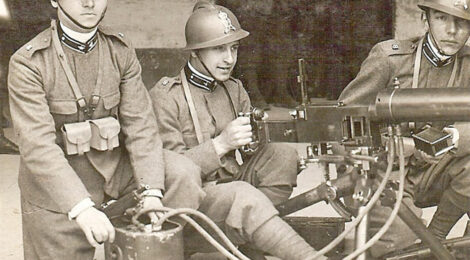 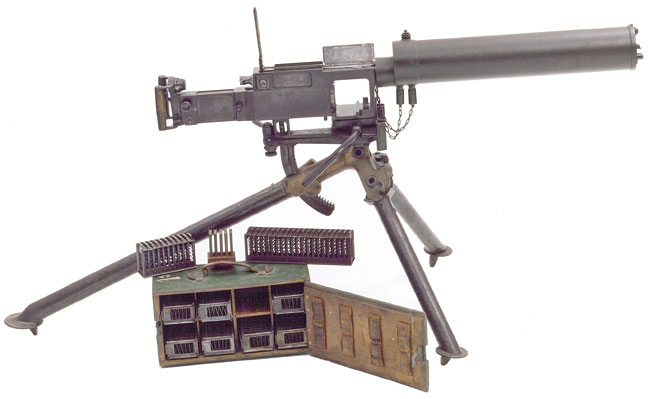 Italy was the first country in the world to officially adopt the Maxim machine gun after the La Spezia trial of 1887, ultimately purchasing several hundred of the 1901 “New Pattern” Maxims to equip its army.  Nevertheless, under the auspices of national pride, the Italian War Ministry was interested in encouraging a domestic machine gun development program; a machine gun designed and built in Italy.

Perino Machine Gun
In 1901, Giuseppe Perino, officer in charge of the Italian artillery factory in Rome, patented and built a recoil and gas operated machine gun that had many advanced features for its time, including a unique feed system.  This feed system consisted of a metal tray holding twenty-five rounds and was fed into the gun from the left.  There was no ejection port as the expended cartridges were replaced in the tray.  An ammunition box was attached to the receiver and held five of these ammunition trays.  The gun fed the trays one at a time from the bottom making it easy to keep full by the assistant gunner by laying loaded trays on top of the stack.  The Italian War Ministry determined that it was an excellent weapon and, for reasons known only to the Italian government, designated the Perino as Top Secret and Confidential.  Only a few were built for experimental and testing purposes until the government felt it was improved enough to compete with other well-known made guns on the world market.

In 1908, Italy conducted a secret trial comparing the Perino with the Maxim.  The Perino fared well but further changes were deemed necessary resulting in a 1908 model; a refined version of the original design.  Shortly thereafter, a 1910 model was developed with more changes.  Yet the Italian War Ministry, in its desire to keep the gun a secret, continued to purchase and equip its army with Maxims while still trying to perfect the Perino.  By maintaining the ultra-secret security measures, the Perino was never tested in open trials, which actually retarded the development of the weapon.  Having been in development for over ten years without any proof of its reliability or efficiency, it was considered outmoded before it had been adequately proved. 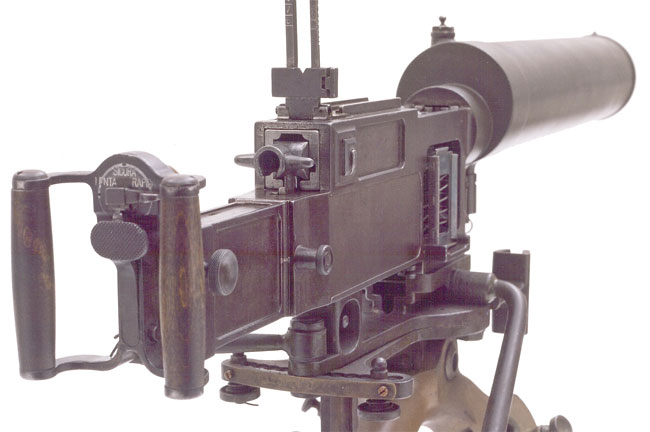 The raised leaf sight ranges from 200 to 2,000 meters. Note the three position fire control selector switch just above the thumb trigger marked LENTA (slow) for single shot, SICURA (safe) and RAPIDA (fast) for full automatic fire. The cocking handle with its cross shape can also be seen directly beneath the sight base. The cocking handle is connected to the breechblock (bolt) and travels back the 5-1/4 inches to the buffer plate with each shot. Not finger friendly.

FIAT Revelli Machine Gun
In 1908, a young Italian inventor from Rome by the name of Captain Bethel Abiel Revelli, applied for his first patent on machine guns.  The first of many, Revelli’s name would ultimately become synonymous with Italian automatic weapon design and would become a high ranking military officer in the Italian army.

Revelli had already caught the attention of the Italian army when he earlier designed (circa 1906) a swinging wedge to lock the breech of a pistol that would become the basis of the Glisenti Model 1910 semiautomatic pistol.  The Glisenti M1910 became the standard Italian side-arm for non-commissioned officers and enlisted men of machine gun and artillery detachments until replaced by the Beretta Model 34 in 1934.  In 1908, Revelli used a similar system as he began work on his water-cooled machine gun using a delayed blowback operating system.  He additionally designed a unique feed system using a metal cage containing the cartridges rather than a belt or feed strip system.  The gun was chambered in the standard 6.5mm (.256 caliber) Italian service cartridge.

Select-fire
One of the interesting aspects of his design was that the gun is select-fire.  There is a three-position lever located directly above the thumb trigger that served as the safety and fire control selector.  To the left is marked “LENTA” (slow) that enabled the weapon to fire in single shot mode.  Vertically in the center is marked “SICURA” (safe) and is the safety setting for the weapon.  To the right is marked “RAPIDA” (fast) allowing the weapon to fire until the trigger is released or the ammunition is expended.  (While it is logical to have the different firing modes to each side with the safety setting in the center, the lever easily can be bumped or pushed to one side rendering the gun in an unsafe condition; resulting in an accidental discharge if the trigger is pushed by accident.) 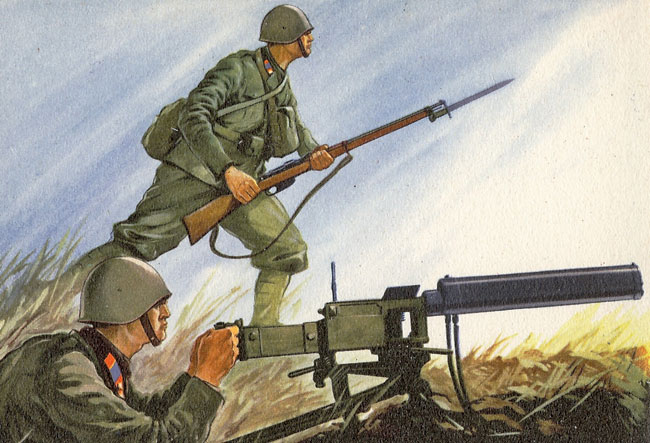 Cartridge Oiling System
It should be noted that almost every reference book discussing the FIAT Revelli Model 1914 mentions that since the gun was a delayed blow-back weapon, which resulted in violent extraction of the fired cartridge case, an oil pump is incorporated within the receiver to lubricate the cartridges prior to chambering.  This is not true.  The FIAT Revelli Model 1914 does not have, nor did it ever have, a cartridge oiling system.  A later version in the 1930’s briefly incorporated such a system but was quickly replaced with a barrel with a fluted chamber to ease extraction.

Tripod
The tripod is of a standard configuration with two front legs that may be folded to the rear for transportation purposes.  There is no accommodation for a seat to be attached to the rear leg.  The tripod head contains a dove-tail mounting bracket that corresponds to a matching mount on the bottom of the gun directly under the feed-way.  The gun is placed on the mount by sliding the gun rearward into the corresponding dove-tail grooves.  To the rear of the tripod head is a spring loaded stud that slips into a hole located approximately mid way underneath the bottom of the receiver.  This locks the gun in position on the tripod head and prevents any movement to the front or rear. 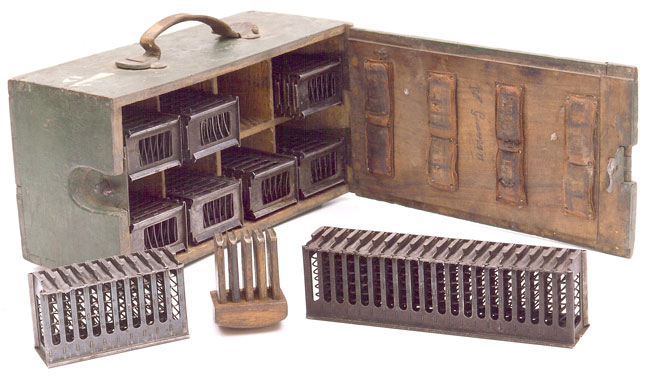 World War I
Revelli spent a number of years perfecting his machine gun design and worked with the FIAT (Fabricca Italia Automobiles Torino) automobile company, who built his prototypes, in Turin, Italy.  The Italian War Ministry gave the gun frequent trials where the gun performed well.  But, the government was indecisive and no further development was encouraged.  World War I changed all that.

Italy, like many countries that purchased machine guns on the world market, suddenly found themselves without a reliable source of foreign manufactured arms.  Sources quickly dried up for Maxim, Vickers, St. Etienne and Colt guns as they were all desperately being used by the warring factions.  Italy realized that, (1) Revelli’s machine gun had performed well in their trials and, (2) FIAT had the capacity and machinery to immediately begin production with the ability to expand production as needed.  Thus, Revelli’s machine gun was quickly approved and adopted as the FIAT Revelli Modello 1914 and, without delay, put into production.  The FIAT Revelli M1914 remained in front line service for almost thirty years until Italy capitulated in 1943 in World War II.  In a modernization program in 1935, the water-cooled jacket was removed in favor of air cooling.

Aircraft Use
The Italians were the first to use the airplane as a weapon of warfare during the Italo-Turkish war that ended in October, 1912.  On January 7, 1915, the Italian Council of Ministers issued decree No. 11, which authorized an independent air service and when Italy declared war on Austria-Hungary on May 23, 1915, her air strength on mobilization consisted of twelve squadrons with four forming.

By late 1915, new aircraft were being introduced into Italian service, all of which required machine guns for defense.  As to be expected, the standard army gun was adopted, the FIAT Revelli Model 1914.