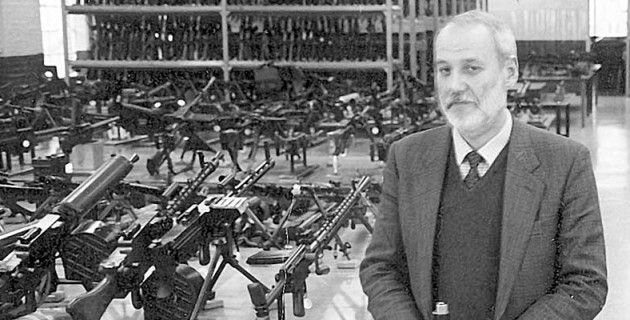 A large group of friends and family gathered today at the front of the old MOD Pattern Room at Enfield Lock, England, for the dedication of a plaque honoring the life and contributions of Herbert J. “Bertie” Woodend, the former Curator of the famous MOD Pattern Room in England. This is one of the largest collections of military small arms in the world, and starting in 1966 “Herbie” was the driving force at Enfield Lock and later in the 1980s-90s at Royal Ordnance in Nottingham, until the Pattern Room was moved over to the Royal Armouries in Leeds in 2002. The collection is now the core of the National Firearms Centre at the Royal Armouries.

There are few books on modern military firearms that do not in some way reflect or acknowledge the contributions Herbie made in research, and many authors and end users consider his help essential to their cause. Many readers of Small Arms Review and Small Arms Defense Journal were friends of Herbie, but everyone in small arms has benefited from him and his life’s work, whether they knew it or not. Herb’s daughter Sarah Lever stands by the plaque in front of the crowd as speeches are given.

It was very nice to be there and see this fitting honor put into place. What still remains is to tell the story of the many others who worked with Herbie while at Enfield Lock, as well as the continuing journey of the MOD Pattern Room at Nottingham, and the current place of the collection as the National Firearms Centre in Leeds, Royal Armouries. There is an ongoing project for this, which hopefully will be online in 2014, and more of the stories can be told. Herb’s daughters Sarah Woodend Lever (left), Arlene Woodend Vince (center) & his sister Helen Montgomery (right) pose in front of the plaques. All were quite pleased that this recognition was being observed.

Visiting: For those using GPS, 51°40’12.61”N 0° 0’52.42”W will get you in front of the buildings, you’ll have to ask for directions to exactly where the plaque is, if you did not know where the old Pattern Room at Enfield Lock was. The invitation to the ceremony stated in part:

On behalf of The Worshipful Company of Gunmakers may I invite you to two events to be held at the site of the former Royal Small Arms Factory, Enfield Lock on the 29th July 2013.

The first is to honour Liveryman Herbie Woodend who was the curator of the Pattern Room. It was the world’s most comprehensive collection of firearms and housed some 6,000 working weapons ranging from a William III flintlock musket, a pair of Colt duelling pistols showing the benefits of interchangeable manufacture through to the British Army’s SA 80 weapon system, all in working order. Herbie jealously guarded and developed the collection, which was vital for MOD weapons designers and used in a number of other applications. He extended the range of weapons available substantially through the use of judicious swaps. Herbie said that it housed the best set of Warsaw Pact guns outside of Moscow! The original collection was transferred to Enfield from the Tower of London around 1841 following a fire there. The contents were transferred to Royal Ordnance, Nottingham when Enfield closed in 1987/88 and subsequently housed at the Royal Armouries, Leeds when Nottingham closed. Herbie died on 29 July 2003, and we honour his major contribution to the MOD and to the small arms community through this plaque which is affixed outside his beloved Pattern Room.

The second is the display of the Branch Proof House sign in the RSA Interpretation Centre. When the Royal Small Arms Factory was privatised by Act of Parliament in 1984, it became necessary for all small arms up to 50 mm calibre produced by the MOD to conform to the Gun Barrel Acts and tested to CIP standards. Since the factory would be producing over 60,000 guns per year, it was impractical for these proofs to be undertaken at the existing facilities at the London Proof House or the Guardian’s at Birmingham. Accordingly, a Branch of the London Proof House was set up at Enfield Lock and opened for business in January 1984. The Proofmaster was Robert Pitcher who subsequently went on to be Proofmaster at London. The sign that you see is from the entrance to the Proof Ranges.

Both objects have been provided and renovated through the generosity of a number of friends of Herbie including David Lloyd, who is determined both to honour and to ensure that the history of firearms and its people are not forgotten.

by Dan Shea on 17 October, 2014.
Tags: 2014, Dan Shea, Herbert J. “Bertie” Woodend, V6N3, Volume 6
← ROMARM Small Arms Factories
ArmaLite and LUTH-AR Announce OEM Partnership →
Distributed at trade shows worldwide, Small Arms Defense Journal is a bimonthly publication that focuses on small arms, accessories, gear for the soldier, new products, industry news, and defense trade shows. The first issue of SADJ was Spring 2009, which launched at the LAAD show in Rio de Janeiro, Brazil. SADJ (pronounced “sage”) is targeted toward military, law enforcement, and defense industry professionals. Our job is to reach these groups and tailor content to their interests while producing a publication that is applicable to an international audience.