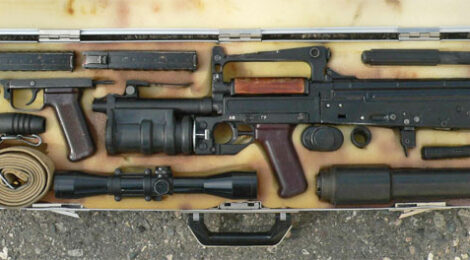 The description below is for the AS “Val” assault rifle.  Differences with the VSS are noted where appropriate.

The AS is a gas operated, integrally silenced weapon.  The receiver is machined from a steel forging for improved strength and durability.  The long stroke gas piston is located above the barrel, and rigidly attached to the bolt carrier.  The rotating bolt has six radial lugs and locks into the receiver.  The front part of the barrel, ahead of the gas port, has several sets of holes drilled at the bottom of the rifling grooves.  These holes are used to bleed some of the gun gas into the integral silencer.

The trigger unit is somewhat similar to that of the Czech-made Sa. Vz.58 assault rifle, and is striker-fired.  The striker spring is located below the bolt return spring, and both springs are assembled into the captive unit with spring guides and a polymer bolt buffer attached to the rear plate of the unit.  The safety lever is similar to the one found on all Kalashnikov-type rifles, but the fire mode selector is a separate lever located within the trigger guard just behind the trigger.  The lever positions are marked with white dots on the pistol grip – three dots on the left side mark the full-automatic setting, and a single dot on the right marks the single-shot mode.

The tangent-type rear sight has a typical U-notch and is graduated up to 400 meters in 25 meter increments, but the actual effective range is about 200-300 meters due to the rainbow-shaped trajectory of the subsonic bullets.  It is interesting to note that both rear and front sights are installed on the silencer body rather than on the barrel or on the receiver.  The front sight is a protected post that can be adjusted for zeroing.  The side rail for day/night scope mounting is machined on the left side of the receiver.  The VSS has a slightly different rear sight, which is graduated for SP-5 sniper ball ammunition, with settings between 100 and 420 meters, in tens of meters.  Between 100 and 200 meters the sight is graduated in 50-meter increments (“10”, “15” and “20”), but beyond 200 meters the graduations are in 20- and 30-meter increments, that is “22”, “25”, “27”, “30”, “32” and so on until “42”.

The integral silencer is of a conventional expansion type.  Its rear part, which is located around the barrel, serves as an expansion chamber and the front part has four baffles made from stamped steel and welded into the single removable unit.  The silencer is attached to the gun via the short thread at the front of the barrel and its co-axial alignment with the bore is ensured by the supporting ring installed on the barrel at the front of the handguard.  The lock is located at the bottom of the handguard.  The silencer is removed from the gun only for maintenance, transportation or storage; firing the gun with the silencer removed is prohibited due to safety and reliability concerns.  The service life of the silencer is normally equal to that of the entire gun system.

The furniture of the AS consists of a short polymer fore end, a polymer pistol grip and a side-folding skeletonized shoulder stock, made of steel tubes, with a plastic buttplate.  It folds to the left side of the gun and does not interfere with the controls so the AS can be fired with the stock folded.  The VSS has a similar fore end, but the Dragunov-type shoulder stock is made from laminated wood and is integral with the pistol grip.  It can be detached for transportation and storage, thanks to the dovetailed mount located on the bottom of receiver just behind the trigger guard.  Both weapons have standard sling swivels.

The AS is optimized for high performance armor piercing 9x39mm ammunition, designated SP-6, but can also fire “ball” type SP-5 ammunition intended for VSS sniper rifles.  The VSS, which is optimized for SP-5 ball ammo, can also fire SP-6 AP ammunition, but it is not normally recommended due to increased wear of the accurized barrel.  The AS is usually issued with 20-round double stack, double feed magazines, made from plastic.  VSS rifles are usually issued with 10-round plastic magazines of similar design, which are compatible with 20-round magazines.

The AS is most often used with basic iron sights, although some users try and customize their weapons to better suit their preferences and the combat environment.  The VSS is usually issued with the 4X PSO-1-1 telescopic sight or with the NSPU-3 IR/night sight, using special quick-detachable mounts, installed on the side rail.

The OTs-12 “Tiss” is similar in design to the Kalashnikov AKS-74U compact assault rifle in all but a few details.  The major differences are the bolt face, adapted to the larger cartridge head diameter (as compared with the standard AKS-74U bolt), the new barrel with the muzzle brake/compensator instead of the flash hider, and the new magazine made of stamped steel.  The sights are similar in design to the parent weapon but re-calibrated for 9×39 ammunition.  The rear flip-up sight has settings for ranges of 100 and 200 meters, due to the limited range of the subsonic ammunition.  Despite the fact that the basic ammunition for the OTs-12 is optimized for use with a silencer, no such attachment was ever offered for the OTs-12.

The basic action of the OTs-14 rifle hardly deserves any attention, as it is a direct copy of the standard Kalashnikov AKS-74U action.  The receiver, however, is slightly modified and a detachable receiver extension, made of polymer, is added below the barrel in front of the receiver.  This extension serves as the base for the installation of the removable pistol grip and trigger unit.  The opening at the base of the receiver, which is normally used for the trigger, is protected by a stamped steel cover, pinned in place, and the new, removable forward trigger group is linked to the sear via a push-rod which passes through the forward receiver extension and the bottom of the receiver around the magazine housing.  The pistol-grip/trigger unit is locked to its base by a protruding lip at the front and the manually released lock at the rear.  The lock is operated by a push-button located on the left side of the pistol grip unit in its rear part.  The rifle is normally supplied with two pistol grip/trigger units, one standard and another combined with the grenade launcher.  In the latter case, the unit has a large switch on its left side, which selects which barrel to fire – the front position of the switch is for firing the rifle, and the rear for firing the grenade launcher.  The manual safety/fire mode selector for the rifle is retained from the parent Kalashnikov design, as well as the reciprocating bolt handle. 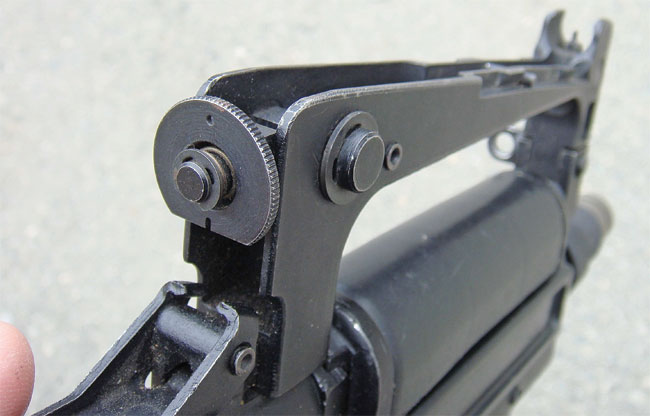 Rear sight blade of the OTs-14 rifle showing switchable aperture and U-notch set into the disc.

The stock of the weapon consists of a hinged buttplate, attached to the rear of the receiver.  It must be unlocked and opened to the left before the gun can be disassembled.  In the ‘assault carbine’ configuration the gun is equipped with a forward vertical grip with a tubular barrel extension, which has the purpose of holding the grip and protecting the holding hand from the muzzle blast.  The front of the barrel is threaded and, depending on the configuration, accepts the forward assault grip, the detachable silencer or the protective muzzle nut.

The sights are installed on the short carrying handle, which is made integral to the gun.  The rear sight has two alternative openings – a U-notch and an aperture, selectable to the user’s preferences through the 180-degree rotation of the circular rear sight blade.  The range adjustment mechanism has four settings – for 50, 100, 150 and 200 meters, with a dial located on the left side of the carrying handle.  Zeroing is achieved by adjusting the position of the front sight post.  The sight line is quite short, and accuracy with open sights is somewhat limited.  The carrying handle is provided with a proprietary quick-detachable mount for a telescopic sight, which is usually a fixed power 4X telescope.  In the GL configuration, the barrel extension is fitted with the folding ladder-type grenade sight with range settings between 100 and 400 meters in 50-meter increments.

The detachable silencer is similar in design to the ones used for the AS and VSS, although the mounting arrangements are different and the barrel of the OTs-14 has no gas escape ports.  The silencer body is made of steel with a screw-on end cap at the rear end.  The rear part of the silencer, which is of larger diameter, serves as a large expansion chamber.  The front part of the silencer contains five baffles, which are made from steel and spot-welded to two side struts to form a single removable unit.  Late production silencers had their outer surface covered with a thin layer of rubber to provide some heat insulation and gripping surface.

The OTs-14 weapon was usually shipped in a fitted case containing the rifle, two trigger units (one standard and one integral with the grenade launcher), silencer, two magazines, sling, and a detachable forward “assault” grip.