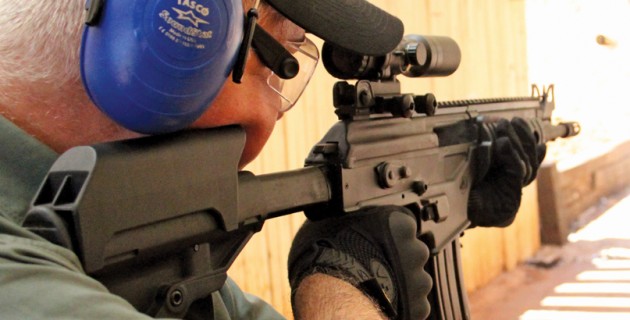 The Galil, the first IDF assault rifle, has been completely redesigned by IWI engineers developing a version that incorporates a fair number of improvements concerning ergonomics and materials, giving to this military classic a new operative life.

When Ysrael Galil and Ya’akov Lior designed the Galil they were solving an emergency.  During 1973, Israelis were equipped with the Belgian FAL in two versions: the “Aleph” model as individual weapon and the “Beth” model as squad weapon, with heavy barrel and bipod.

On Mideast battlefields, both models resulted in dangerous failures; up to the point that Israeli soldiers began to exchange the FAL with a special Uzi version with an extended barrel, something between a carbine and a SMG.  As an example, the Golani infantry unit that reconquered Mount Hermon during the Yom Kippur War was armed with this peculiar Uzi configuration, paying a high casualty tribute facing Syrians, on the top positions, armed with AK47s.

Also in the Sinai theatre of operations, the Egyptian AK was superior as to reliability and controllability (Israeli FAL is a metric one with full auto capability).  Further, the Russian weapon was considered compact as the standard of that era and thus better compatible with mechanized infantry units, while the FAL was giving hard times to the average Israeli infantryman when going in and out from vehicles and helicopters due to the excessive length. After considering the Israeli victory in 1973, the Israel Defence Force accurately analyzed the problem and the answer was that Israelis also wanted their AK47.

In the meantime, the United States was massively entering the Mideast game, replacing France as Israel’s military partner and main supplier.  From the U.S. were arriving new ammunitions, new aircrafts, new systems, new tanks.  The Israelis transformed them all adapting to their own needs, but they could not ask the Americans, of course, to produce Russian M43 cartridges.  The American ammo at that time was the M193 cartridge, optimized to give the maximum performance in a 20-inch barrel with its 55 gr bullet and 1:12-inch rifling twist.

Galil and Lior worked around that cartridge and its ballistic parameters, refining their AK system until they obtained, what has been for a long time, probably the finest assault rifle on AK operating systems in 5.56 caliber.  The rifle was really reliable (Israeli veterans that used the Galil in training or combat still have enthusiastic words for it) and robust, able to withstand any abuse while in service.

But there was a price to pay, because to avoid all the cracking problems on the steel stamped sheet action that Russian AKs experienced and that  in many cases compromised the structural integrity of the weapon, the Israelis preferred to build the rifle from a machined solid steel billet action.   This made the rifle terribly heavy. The metallic stock was a folding one, to reduce the overall dimensions when carried in the vehicles, it added further weight, as well as did the steel bipod/bottle opener, carry handle and the 35 round stamped steel magazines. The arrival around 1975 of the M16A1, with the approval of U.S. Military Aid Program (MAP) for Israel, appeared to Tsaha’l infantryman like a liberation since he/she had no more to carry while in patrol more than 4 kg of rifle.

The Israelis learned how to make their M16 reliable and efficient, recycling them almost infinitely, and the Galil was replaced almost everywhere, with the exception of some services, like the Police Guard at the Knesset entrance, where the national made rifle is still proudly hanging from policemen’s shoulders.

In some South American armies, where the Galil has found its own niche, this rifle is still popular among  soldiers and it is still officially equipping them.

IWI continued to improve with remarkable success, looking to new materials and design refinements to solve the limits of weight and ergonomics. This last was derived from the AK47 heritage but not really a happy one,  giving birth to a version called Galil ACE.

This article is going to describe a brand new version of the Galil ACE. The weight reduction, as usual, has been obtained redesigning the action, always of a machined type, and integrating the steel with a special polymer, much lighter than the old all steel receiver. Operating System and BCG
The operating system is identical in principle to the AK47 one: gas-operated long-stroke piston system, with it’s sturdy rotating bolt and two big locking lugs closing the breech on the weapon frame.

The operating system is so famous that this time we would avoid describing it.

While the rotating bolt is identical to the Russian weapon, excepting the dimensions of the bolt face changed to accommodate the smaller 5.56 NATO cartridge, the bolt carrier shows major redesign.

On the original Galil the charging handle was bent upward, allowing the shooter to rack the bolt using the left hand while the right hand was keeping the rifle in aiming position and without being forced to rotate the whole weapon to perform the drill.

With the ACE the charging handle has been moved on the left side for better ergonomy. On the right side a deep cavity has been machined on the bolt-carrier body, to avoid dirt clogging and jamming the bolt group while moving.

The bolt group, of course, is permanently attached on the upper-front part of the bolt carrier to the long operating rod that ends with the gas piston. The rear of the operating rod is hollow, to accommodate the recoil spring and spring rod.

The button at the terminal part of the spring rod is overdimensioned, if compared with the Kalashnikov counterpart, to allow a better stabilization of the top cover when closed. This detail is important since on this component IWI engineers put the rear iron sights and the first portion of a full length picatinny rail to mount any optronic device the mission requires. The front sight is the post type, similar to the one of the M16A1 that is already familiar to the IDF.

The Barrel and Front Sight Base
The barrel has been built using the cold hammering process. Rifling has a right hand twist of 1:7”, optimized for the SS109 NATO cartridge M855, with the 62 grs bullet, but IDF still uses M193 ammunition with the lighter 55 grs bullet for the normal infantryman, reserving the NATO ammunition for the DMR.

Mounted on the muzzle there is a flash hider similar to the current one on American M16A2/M4s, with five open slots on the upper part and completely closed on the lower part to reduce dust signature and to act as a muzzle brake to reduce barrel climbing at each shot. Internally the barrel is chrome lined, for better resistance to corrosion.

The Galil ACE is produced in several version and calibers. The rifle in 5.56 has three versions according to which barrel length is used: ACE21 mounts a 8.43” barrel (215 mm), ACE22 a 13” barrel (332 mm) and ACE23 mounts a 18” barrel (460 mm). Gas port is mounted on the barrel in different positions, according to the barrel length, using a cast metal FSB.

The Front Sight Base (FSB) accommodates also the front sight identical to the post type of the M16A1, with large protection ears, a spring loaded retention pin to lock front sight adjustment in the desired position and at the bottom, just under the barrel, the bayonet locking lug, compatible with the M16A1 bayonet, widely present in the IDF logistic chain.

From the FSB departs the gas tube that has, in proximity of the FSB, three holes to eliminate excess of gas spilled from the barrel as the piston starts to move after the initial impulse given by firing.

The gas tube, unlike the Russian system, is mounted on the rifle thanks to a dovetail slide machined on the receiver upper-front block, and has a picatinny rail on the top. This avoids any movement of the gas block that can influence barrel vibration and thus degrade rifle accuracy.

Barrel has no barrel extension, but just the breech protruding into the receiver.