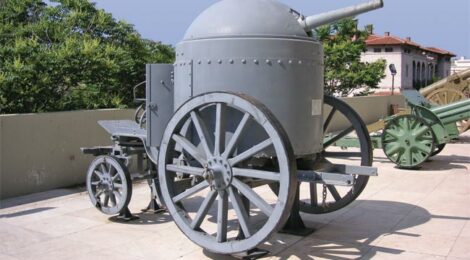 Located in the center of Athens just several hundred yards from the Athens Hilton hotel is the Greek Ministry of Defense War Museum.  Opened in 1975, the museum’s mission is to gather, safeguard and display military artifacts and memorabilia of Greek history to reinforce the national memory and highlight the historic continuity and unity of Hellenism.

The outdoor exhibits feature a fine display of a number of howitzer light field guns, anti-aircraft and mountain artillery pieces from different periods used by the Greeks, or their war booty.  These include a French 47mm M1937 Puteaux, Bofors Mk I Rapid Fire 40mm AA gun, Hotchkiss 25mm M1938 light AA gun and two unique armored metal horse drawn carriages each armed with a Krupp-Schuman Model 1899 57mm gun.  These carriages were used by the Central Powers during World War I and are spoils of the Hellenic army from the Bulgarian army in 1918.  Also on display are some aircraft used by the Hellenic Air Force that include a replica 1912 H. Harman, Bell helicopter OH-13S, F-5A, F-104, F-84F, T6-G Harvard and F-86D.  Guarding the entrance to the museum building is a British 40mm Model 1940 Pom-Pom gun used by the Greek Navy in World War II.

Inside the museum, the first floor is dedicated in twelve specially laid out halls devoted to antiquity, the Alexander Years, Byzantium, Latin and Turkish rule, the National Uprising, the Greek War of Independence in 1821 and the New Hellenic State.  The exhibits display the arms and armor of these periods and include pikes, spears, swords, cross bows, daggers, armor and early European rifles and pistols.

The mezzanine level is dedicated to the action and contribution of the Greeks to the success of allied operations against the Axis forces during World War II including Sacred Company, El Alamein, Rimini in North Africa and Middle East, Italy, the Aegean Islands and the coast of Normandy.  The Occupation, Resistance and Liberation of Greece complete the section on World War II.  There is a separate section on the mezzanine that highlights the contributions of Greece to the United Nations mission to Korea.

Weapons on exhibit on the mezzanine level are displayed both openly and in enclosed glass display cases with placards identifying the weapons in both Greek and English.  Mannequins in various uniforms add to the well thought-out displays.  While the display of heavy machine guns, light machine guns, submachine guns, rifles, bayonets, pistols, grenades and mortars are highlighted, they of the common WWII variants; but they are well represented by the United States, Britain, French, Italian, Czech and German origins as used and encountered during World War II.

The museum is housed in a purpose built building and is well thought out in its layout and displays.  If visiting Athens, it is time well spent to visit this museum.  The museum is located at the corner of Vassilissis Sophias Avenue and 2 Rizari streets in the center of Athens.  The museum is open weekdays except Monday from 9 a.m. to 2 p.m.  Admission is free.

Be sure to make arrangements to visit the museum during the next Defendory International show in Athens, Greece, October 2010.

A nice representation of selected artillery pieces embellish the terrace level of the Greek war museum. 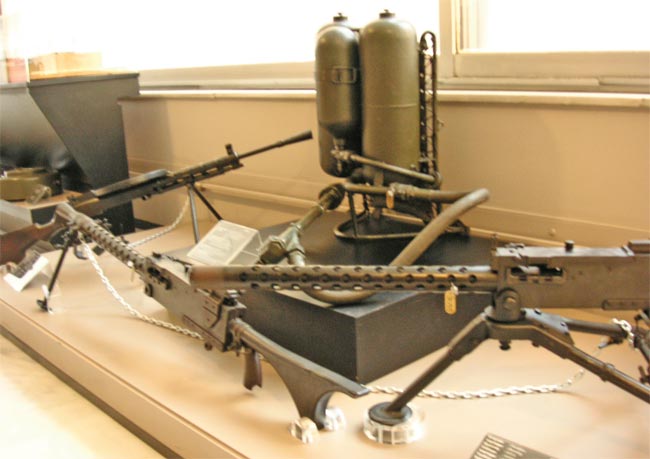 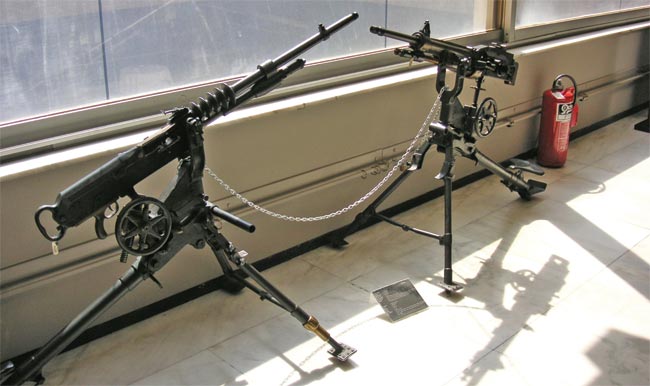 Along the mezzanine level hallway are two examples of early French machine guns used by the Greek army: the Hotchkiss Model 1914 and St. Etienne Model 1907. 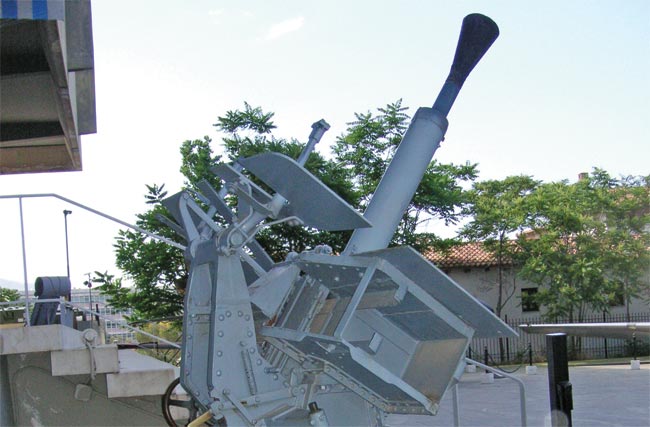 British 40mm Model 1940 Pom-Pom gun used by the Greek Navy in World War II stands guard at the entrance to the Ministry of Defense War Museum. 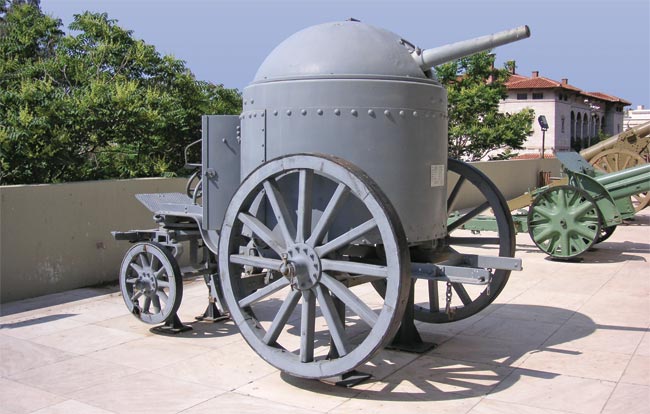 Armored metal horse drawn carriage armed with a Krupp-Schuman Model 1899 57mm gun. Used by the Central Powers during World War I, they are spoils of the Hellenic army from the Bulgarian army in 1918.

Tags: 2009, Museum, Robert G. Segel, V1N1, Volume 1
← U.S. Maxim Model 1904
MSPO 2008 →
Distributed at trade shows worldwide, Small Arms Defense Journal is a bimonthly publication that focuses on small arms, accessories, gear for the soldier, new products, industry news, and defense trade shows. The first issue of SADJ was Spring 2009, which launched at the LAAD show in Rio de Janeiro, Brazil. SADJ (pronounced “sage”) is targeted toward military, law enforcement, and defense industry professionals. Our job is to reach these groups and tailor content to their interests while producing a publication that is applicable to an international audience.