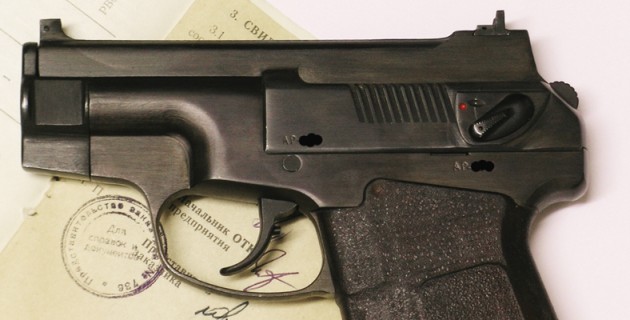 For a compact assassination pistol, the Soviet PSS with its companion SP4 silent ammunition is a hard combination to beat.  While the PSS resembles a somewhat large conventional blowback pistol, it is definitely unique.  The weapon is 6.7 inches long and weighs 30 ounces.  Its size is comparable to a SIG P226 pistol, but the specialized ammunition delivers a close range lethal projectile with almost no sound signature.

The Soviet PSS semiautomatic pistol is a six-shot semiautomatic silent weapon designed to utilize only the SP4 captive piston silent ammunition.  The PSS firing mechanism is single/double action with open hammer and slide-mounted safety/decocker of conventional Makarov design.  The sights are fixed, and the intended operational range of the weapon system is short.  Although approximately 25 years old, it remains on the forefront of captive piston technology and is still an operational weapon.

The SP4 (also referred to as 7.62x41mm) cartridge is unique.  The cartridge case is made from steel (alloy presently unknown) with a heavy copper-zinc plating meeting the specifications of C220 (ComBz).  The projectile is a 155-grain mild steel cylinder that is launched at approximately 650 ft/sec.  The projectile features a brass driving band on the forward diameter that engages the rifling in the short barrel.  There is a recess in the center of the rear of the projectile that both centers the rear of the projectile on a protrusion on the short piston as well as stabilizes the piston during its travel forward. On firing, the primer ignites a small powder charge that then accelerates the piston forward (pushing the projectile).  At the end of the piston’s travel, it is suddenly arrested by a retaining crimp or shoulder on the front of the cartridge case.  The projectile then continues in a forward direction, and the case ejects from the weapon.  The driving piston, which is captured in the case, obturates the neck of the case and contains the pressure within the spent cartridge case.  It is known that these expended cartridges may contain pressure for several weeks, and attempts to disassemble them within a month of firing can be hazardous.  Because the driving gases are contained, the weapon is essentially silent.  Sound measurements utilizing the International Industry Reference Protocol have shown the absolute sound pressure level to be in the vicinity of 122 dB, which is on a par with simple airguns and suppressed .22 LR rifles.

We have had the opportunity to do fairly extensive testing and study of this unique weapon system.  This includes complete disassembly of the PSS pistol, a project not to be undertaken lightly.  The pistol includes a floating chamber, and the method of operation and reason for the floating chamber have been a matter of speculation until recently. In smaller caliber handguns and submachine guns, the most common action is the simple, unlocked blowback.  In these weapons, ignition of the powder charge in the cartridge generates significant pressure that exerts force in all directions.  The forces directed forward press against the base of the relatively lightweight bullet, accelerating the bullet forward through the barrel.  Being lighter than the weapon, the bullet accelerates to a high velocity.  The acceleration continues as long as pressure remains in the bore of the barrel until the bullet exits and pressure suddenly drops.  This is simple Newtonian physics of equal and opposite reaction: the energy to drive the lightweight projectile forward at high velocity is equal to the energy to drive the heavier slide or bolt rearward a shorter distance and at a lower velocity.

In discussing weapon cycling, time is often difficult to conceptualize.  In conventional weapons, there is a finite (although short) time under pressure referred to as “dwell time.”  This is the time during which the bullet is still being propelled by the gases in the bore and there is pressure in the bore to act on the slide or bolt.  If a floating chamber is present, the pressure will initially move the cartridge case (and floating chamber) rearward almost microscopically and allow pressure to push on the larger cross section area of the floating chamber.  In a locked breech handgun, the barrel (locked to the slide) starts rearward acceleration and the action starts to open once the barrel unlocks from the slide and pressure drops in the bore and cartridge case.

In conventional weapons, pressure in the cartridge case causes the case to expand slightly and form a gas seal against the chamber itself or the neck of the chamber, maintaining pressure in the bore.  The same forces driving the bullet act over the same finite time interval against the base of the cartridge case, which starts acceleration of the case and slide (or bolt) rearward against the recoil spring with the same energy.  Because of the greater mass of the slide or bolt, velocity is significantly lower.  However, friction of the expanded cartridge case against the chamber delays actual movement for a few microseconds until the pressure drops slightly on bullet exit.  At that point in time, the case can start its extraction process.  In high speed video analysis, there has been shown to be virtually no extraction until the projectile has exited the bore. In late March 2012, we utilized an Olympus I-Speed 3 high speed video camera to observe the operation of the pistol in operation.  Camera settings were a frame rate of 3,000 frames/second and a shutter speed of four microseconds (1/250,000 second).  This corresponds to a frame every 333 microseconds.  The short shutter speed allowed a series of frames capturing the projectile in early flight to check for yaw and other signs of instability.  In operation, the camera records continuously, looping through memory.  To capture the action (in this case weapon cycle), the camera is stopped manually immediately on completion of the event, and the desired segment of the video showing the action is saved as a video file.  One of the options in the video software is to print individual frames as a series of JPEG still images.  Nine of these images are presented with the first five being consecutive.

In the case of the SP4 captive piston ammunition, all of the projectile propelling gas is contained within the cartridge case and there is no propelling gas to create pressure in the bore of the pistol prior to projectile exit from the barrel of the PSS pistol.  There is also no gas to drive the floating chamber rearward, initially raising the question as to why it was included in the PSS pistol.

The series of frames from the high speed video starts (F-683) with the hammer having fallen and ignition.  The next consecutive frame (F684) shows the immediate start of rearward movement of the floating chamber pressing against the slide.  It isn’t until the fourth frame in this series (F-686) that the cartridge case starts to extract from the floating chamber.  It is interesting to note that in spite of minimal rifling length, a cylindrical projectile, and the awkward propulsion method, there is no apparent instability or yawing of the projectile.

The floating chamber in the PSS has several functions.  For one, it increases the mass of the moving parts in the initial stages of recoil.  There has been speculation that it also is used to slow down the slide on its final stages of movement to dampen the sound of the slide hitting the stop on the end of the recoil cycle.  However, the high speed video does not bear out this explanation.  What the floating chamber does do is to eliminate the lag time waiting for the cartridge case to shrink slightly away from the chamber wall. PSS pistol field stripped. The floating chamber in the rear of the fixed barrel is labeled.

At the instant of ignition, there is going to be a minimal amount of expansion of the steel cartridge case.  Initially, the pressure in the rear of the cartridge case is going to be higher than the pressure elsewhere in the case, and this is going to cause increased expansion of the case in the rear.  Once the piston has reached the extent of its travel, pressure will equilibrate and there will be some relaxing of the expansion in the rear of the case.  The expansion of the rear, while only transient, will increase wall friction significantly until pressure equilibrates.  The dwell time in this weapon is significantly shorter than in a more conventional blowback, because the dwell endpoint is when the piston stops as it is captured by the end of the cartridge case.  Piston travel is approximately one inch.

As the piston moves forward driving the projectile, there is high acceleration until the copper driving band engages the coarse rifling in the barrel within the first 2-3 millimeters of piston travel.  The expanding gas inside the cartridge case causes force in opposite directions: first to propel the projectile toward (and out) the end of the barrel, and second to start accelerating the base of the cartridge case rearward against the slide.  Since pressure remains high in the rear portion of the cartridge case, the case remains stuck in the floating chamber until the piston is at the forward limit of its travel and pressure equilibrates.  Because the floating chamber shows little or no friction with respect to the barrel or frame, the slide can start immediate rearward acceleration.  Once the pressure in the case has equilibrated, the case can then start its extraction from the floating chamber, which then returns to its original position under spring tension.  The time under pressure for extraction is significantly less than in conventional firearms because of the limited motion of the piston, and any delay in initiating rearward travel would prevent complete cycling of the weapon.

Were it not for the floating chamber, cycling of the weapon would not be possible as friction would hold the case in the chamber of the barrel too long.  Further, it is thought that the floating chamber provides additional reinforcing of the rear portion of the steel cartridge case until pressure has equilibrated.

There are several items of information that would be helpful in proving this theory. First, it would be of great interest to know the pressure curve in the cartridge itself.  Lacking ability to track the gradual change in pressure from ignition until the piston arrests, knowing the maximum pressure would be of value.

The forgoing is a postulation as to the mechanism of cycling and extraction of the SP4 cartridge in the PSS as well as the role played by the captive piston in this most unique weapon.