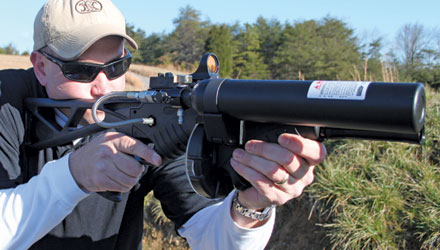 The FN 303 Less Lethal platform is a semiautomatic shoulder fired launcher that uses compressed air stored in a removable and refillable bottle to launch its projectiles stored in a fifteen round disc magazine.

Range evaluation of the FN 303 began with an orientation and introduction of the launcher from Jeff and Gretchen Burch.  Jeff and Gretchen are the proprietors of the training entity Take Aim LLC as well as contractors for FNH USA.  Jeff walked through the basic features and controls of the FN 303 including maintenance procedures that consist of light lubricant and switching O-rings at designated round counts.  FNH-USA offers and encourages new users to send personnel to the FN 303 Armorer’s course to gain a full understanding of the FN 303’s features and maintenance needs.   Echo Valley Training Center (EVTC) was the site used for the FN 303 demonstration and evaluation.  EVTC is private facility with multiple 100 yard enclosed bays and 360 degree “drive-in” range all capable of handling numerous students conducting “square” range drills or more dynamic/fluid types of training.  In conjunction with the individual training bays, Echo Valley Training Center features multi-stepped target berms that are strewn with reactive steel targets from TacStrike, fluid drained automobiles, and moving targets at ranges varying from 100 out to 350 yards.

The FN 303 shines in multiple categories of performance, especially when compared to shotgun or grenade launchers pressed into service in the less-lethal role.  The FN 303 being designed from the ground up as a less-lethal launcher versus being adapted into this role is a major reason for this.  One of the categories the FN 303 really excels in is unprecedented accuracy for a less-lethal launcher.  3-inch groups at 25 yards and 5-inch groups at 50 yards were the norm with each of the different projectiles tested.  This fully justifies mounting a red dot optic on the launcher.  The fact that each projectile weighs and is constructed in the same fashion ensures very similar points of aim even when switching between round types for maximum flexibility of use.  The FN 303 projectile is made from a polystyrene body with a non-toxic bismuth forward payload balancing out the projectiles weight no matter the rear payload.  The projectiles break apart upon impact serving to both minimize risk of penetration injuries and facilitate delivering secondary effects represented by the rear payload – whatever that may be.  The FN 303 exhibits little recoil during firing and the projectile’s flight is easily traceable by eye.  This allows for quick adjustment of aim and another projectile placed on target with minimal time between rounds.  This capability can not be under estimated when mated with the 15-round disc magazine.  The 15-round disc magazine also offers quick reload capability with the FN 303.  Chronographing the FN 303 projectiles indicate 295-300 fps with little deviation between rounds.  A full oxygen bottle provides 80-100 rounds fired with the bottles easily changed out and extras carried in a small pack if it is warranted.  The air reservoir bottles can be charged from SCUBA type oxygen bottles.  FN has designed the FN 303 so that projectile velocity remains constant during the life of the charged oxygen bottle due to regulator used.  This is important for consistent accuracy and no degradation of performance. The FN 303 exhibited no problems hitting specific areas of the torso repeatedly and in rapid fashion at 25 and 50 yard ranges.  EVTC reduced scale steel poppers were easily engaged with audible smack and mist cloud evident as secondary FN 303 payload was deployed.  The FN 303 with its minimal recoil is conducive to accurate firing with it possible to engage TacStrike steel silhouettes placed at 100 yards.  This is simple to do as projectile flight is observable with semiautomatic capability and minimal recoil allowing for correction and another round sent almost instantaneously.  One word here is that any fin stabilized round projectile fired traveling at only 300 fps is going to be affected by gravity thus a parabolic trajectory; wind is also capable of impacting flight characteristics, especially once distances extend past 60 yards.  100 yards is recognized as being at the outer limits of the FN 303’s operating window due to this.  Let’s face it – one will find at 100 yards it is difficult enough to identify specific subjects let alone engage if in a crowd.  It is refreshing to know that the FN 303 does have the potential if specific situations reveal the need.  One hypothetical scenario easily conjured up for the FN 303 is if during a patrol a crowd of unruly youth/locales begin agitating or acting aggressively a block or more away.  A couple quick rounds of FN 303 PAVA could break up the situation preventing further escalation.  Another route would be for FN 303 indelible paint rounds marking the persons for further monitoring with the blunt trauma of round impact sending a clear signal that situation is being watched.  Along these same lines with indelible paint, a sentry could mark a vehicle if it is recognized as circling an area with action taken if a prescribed number of marks are gathered.

Research on the FN 303 reveals that its projectiles penetrated 2.5 inches of T-shirt covered calibrated ordnance gelatin when fired from 15 feet.  Some penetration is expected considering the FN 303 relies on blunt force trauma for effect.  The accuracy and velocity of the FN 303 indicates that it is better suited for ranges past true point blank, which is indeed the major impetuous behinds its design to give officers a stand off capability.  This makes sense with any projectile firing device with any unpredicted point blank encounters more than likely the realm of hands on techniques anyway.  Procedures and policies of use can curtail use of the FN 303 at bad-breath distances as intended targets are to be engaged before closing into a specified range window. The FN 303 exhibited no problems hitting specific areas of the torso repeatedly and in rapid fashion at 25 yard and 50 yard ranges. EVTC reduced scale steel poppers were easily engaged with audible smack and cloud mist evident as secondary FN 303 payload was deployed.

Jeff and Gretchen Burch were not only helpful talking through the FN 303’s features but provided great anecdotal insights into the FN 303 uses.  One such story involves correction officers having no problems defeating improvised screens of mattresses often encountered with inmates barricading themselves in their cells with the FN 303.  The FN 303 PAVA round is especially effective in this scenario.  Other information relayed was that getting struck with the 8.5 gram FN 303 projectiles moving with an initial muzzle velocity of 300 fps feels like getting beaned by a 90 mph fastball.  This factoid is something most of us can relate to better than strict engineering measurement.  For those wanting a more scientific based quantity this is equivalent to 24 ft/lbs of energy.  Jeff and Gretchen brought a hollow core wood door and 5/8-inch drywall to the EVTC range to aid in demonstrating capabilities.  The FN 303 projectiles punched right through the center of the door and drywall placed approximately 12 yards away from firing point.

The FN 303 is capable of breaking automobile glass as long as certain techniques are utilized.  A car at EVTC was “volunteered” for this portion of evaluation.  The front windshield with its laminated glass is not penetrable with only spider webbing possible if firing from an elevated position perpendicular to the windshield.  A more useful technique if the FN 303 is pressed into service against the front windshield is to use the indelible paint round to both obstruct driver view and mark vehicle for later follow up.  FNH USA training experience shows that if car glass is to be penetrated it is best to approach the side glass from a parallel ground position aiming perpendicular to the side glass targeting the lower right edge of the window; hands on experience with the FN 303 at EVTC supports these training recommendations.  When the side glass was struck in the center too much flex was present in the glass with projectile breaking up as designed without causing the glass to break.  A more precise aiming point in the right corner was successful in breaking the side glass.  Jeff was approximately 5-7 feet away during this testing.  This capability gives personnel the ability to remove recalcitrant subjects from a vehicle; a quick round from the FN 303 to break the glass with 14 more rounds ready to obtain subject compliance if still resisting. The key with the FN 303, as with any device placed into the hands of LE or military personnel, is that properly trained personnel should be tasked with its use.  Shots above the torso into the neck/head area should be avoided as this may cause injury: even death.  Such an incident occurred in 2004 involving Boston Police during a crowd control incident.  This is not brought up as an indictment against Boston PD or the FN 303; only to highlight the inherent dangers of less-lethal platforms if operational procedures are not followed.  The FN 303 is a weapon and should be treated as such when deploying.  The FN 303 has a multitude of uses and is a great tool for LE/military/security personnel who strive to expand the force continuum beyond lethal force only.  The ability to place projectiles to a specific point of aim is a great asset when trying to de-escalate a tense situation such as crowd control.  The FN 303’s increased stand off distance compared to other devices on the market not only increases officer safety, but importantly offers more time for decision making which is a valuable commodity in any confrontation.

As evident by the recent spate of “Occupy…you name it” demonstrations, law enforcement personnel are facing unique force continuum challenges.  Along these lines, the consideration and appreciation of less-lethal devices are gaining ground in terms of civil disorder response; not to mention finding traction in correctional facilities, border defense, physical security of businesses, and other applications that are continually unfolding.  Right or wrong, the ever present access to social media also adds into the mix of how law enforcement responds to organized civil disobedience and unruly crowds.  Based on this, the expanding use of less-lethal technology will be the norm in police departments across the country over the next few years.  During the past several decades, there has been a national policing trend toward the adoption of less-lethal weapons driven by the quest for effective methods besides going “hands-on” with unruly subjects.  Less-lethal weapons are intended to reduce officers’ need to use lethal force without diminishing officers’ effectiveness or undermining the safety of officers, suspected offenders, or bystanders.  One of the latest devices and one showing the great promise with utility constantly being expanded is the FN 303 Less-Lethal Launcher distributed by FNH USA.