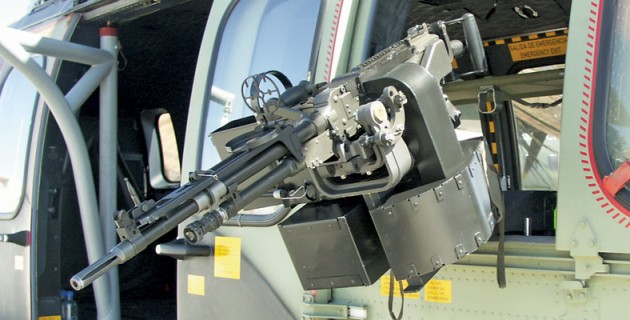 The International Air and Defense Fair (FIDAE) that takes place in Chile every two years rebounded from the quake that shook the region in 2010 with the exhibition in 2012 proving to be 25% larger than the previous event.  Two years ago, FIDAE took place against all odds and only a few days after the country was hit by one of the biggest earthquakes and tsunamis in history.  The exhibition took place as a showpiece to demonstrate that Chile had fortitude and organizational skills to allow the show to go on, as relief assistance was taking place in parallel to the fair.  Jose Higuera, from FIDAE 2012 News, tells us that more than 624 companies were represented in the event, making the exhibition the biggest and most important defense and security event in Latin America and one of the most important in the world.  FIDAE CEO, Lt. Col. Jean Pierre Desgroux, declared that the fair does not fuel the prospects of an arm race in the region, and qualified the fair as a multi-spectral, encompassing defense, commercial, and military aviation, as well as general aviation, space and homeland security.

The U.S. in particular had a heavy presence, with over 70 companies being represented at the show.  Most prominent was the display from the U.S. Department of Defense, along with the presence of the U.S. Embassy in Pavilion C, one of the seven large hangars used for the exhibits.  This being mainly an air show; received the Latin American debut of the Boeing 787 Dreamliner, a huge wide body carrier of which LAN airlines from Chile has opted for 32 examples.  There were a number of F-16 fighters from the Chilean Air Force (FACh) and Texas Air Guard.  It was highlighted that the FACh F-16 force is now at full strength, with three operational squadrons to include 10 Block 50 C/D variants, and 36 upgraded A/B MLU models. An evolution of the MGL. (J. Montes)

The European industry countered with the presence of the Airbus A380, and the impressive A-400M transport, one of the four testing examples now in operations In addition, Alenia-Aermacchi presented its C-27J, which shared tarmac space with C-130s, and its rival C-295.  In the fighter category, there were two Mirage 2000s from the Brazilian Air Force in representation, plus the Chilean Mirages on the side (now retired), which were exhibited along a still operational A-37B.

There were two machines that are particularly interesting and important strategically in the region that were present in FIDAE.  The AT-29 Super Tucano, represented by an example from the FACh, had won a few months ago the Light Air Support capabilities (LAS) from the USAF for procurement to the Afghan and other allied air forces under the designation of A-20.  The AT-29 has been selected by Guatemala, Honduras, and El Salvador, as well as their preference to replace the A-37B; in addition, the plane has proved itself in its native Brazil, as well as Ecuador, Colombia, and Chile.  However, soon after the LAS competition, Hawker Beechcraft, the company responsible for the AT-6C contender, filed a lawsuit.  As result, in February, the Air Force scrapped the $355 million contract it gave the Brazilian’s Embraer and U.S. Sierra Nevada Corporation for 20 Super Tucano light attack turboprops.

The gap left by the ill-fated A-20 could still be filled by the A/T-50 Golden Eagle, which was also represented in FIDAE.  This is a light multi-purpose jet trainer developed between the Korean Air Industry (KAI) and Lockheed Martin.  The basic T-50 has evolved into the A-50, a light fighter equipped with a multi-dimensional AN/APG-67 radar, originally developed by GE for the F-20 fighter.  The radar has also been selected to equip other light fighters such as the Argentinean IA-63 Pampa and the Taiwanese AIDC F-CK-1 Chingkuo.  A more advanced radar from Israel has been selected to equip the follow-on variant, the FA-50.  The Golden Eagle series are equipped with a Samsung-Techwin built engine, which is the GE F404-102 turbofan with FADEC (Full Authority Digital Control) built under licensed.  The engine allows a maximum speed of Mach 1.5.  The Guatemalan Air Force has already mentioned the AT-50 as potential replacement of the A-37B, and Chile is also considering it as replacement of its aging fleet of A/T-36 and A-37B.  It is noted that the series F/A/T-50 would be ideal replacements of the mentioned worn out A-37B, providing for a true high performance machine to Central and South American countries. Many other industries, to include the U.S. and Israel, highlighted their technological achievements in AUV at the fair.  Many robotic drones are being used in homeland security tasks, surveillance, intelligence gathering and others.  There were several mockups of the successful Predator, to include B, and C Avenger, Gray Eagle, and Sea Avenger variants, and associated systems such as Lynx radar, Claw Payload Software and Griffin Eye surveillance systems.  On the other hand, even the U.S. has made use of several Israeli designed and built AUVs such as the Heron.  Several of these drones have been deployed in drug-surveillance flights in the continent.  U.S. and Israeli systems are operational not only along the border, but also in security tasks along oil installations in the Gulf and Colombia.

Eurocopter displayed one EC-275 from the Brazilian Air Force.  This model is a twin-engine, 11-ton evolution of the Super Puma/Cougar family.  The Brazilian and Mexican forces have ordered the EC275, and the aircraft is competing for orders from several other air forces.  Numbers of other helicopters and light aircraft adorned the tarmac.

Ground Forces
Although the show is geared to air and space, there is considerable presence of ground equipment on display; anywhere from harnesses and infantry equipment to artillery systems.

In the 1980s, the U.S. replaced many soft-skinned vehicles with the Humvee.  One of the replaced items was the M151 MUTT.  The demise of this little do-it-all 4×4 appears to have been premature, and has resulted in the introduction of a large list of light all terrain wheeled vehicles in the 500kg payload category to fill the gap.  In this field, General Dynamics provided information on the JAMMA (Joint All-Terrain Modular Mobility Asset), built as a first response high performance platform, with an innovative rollover protection and modular, threat-specific armor for multiple mission profiles.  This small silhouette vehicle can be used as reconnaissance, rescue/recovery, medevac, mobile security and rapid response vehicle.  The JAMMA can fit the bay cargo of the V-22 Osprey or larger aircraft, and comes in a Narrow Track Configuration (NTC) or in a Wide Track Configuration (WTC).  The vehicle can travel at a speed of 85 mph (136.8 kph), at a range of 450 mi (724.2 km), provided by a 3.2L V6 180hp Turbo Diesel engine and a automatic transmission. IAI presented the larger RAM MKIII, with an empty weight of 5.3 tons, and a payload of 1.2 tons, giving for a combat weight of 6.5 tons.  Although the RAM is a larger vehicle than those two previously mentioned, the initial concept of the RAMTA RBY MK-1 was to field a jeep size vehicle, lightly armored, and highly maneuverable, armed with machine guns, RCLs, and TOW missiles to attack heavy armored formations in southern Lebanon.  The RBY-MK1 became successful in Central and South America during the 1980s, and its lines inspired others such as the Carrancho from Chile, which used a Chevy S-10 pickup truck chassis; the Salvadorian built Cashuat light attack vehicle, based on the Dodge M-37B chassis, also follows similar lines and concept.  The RBY would eventually transform as weapons platform, with adaptation of the TCM-20 turret and the M40A1 106mm RCL.  The RAM-Mk III, at FIDAE, was presented as a tank killer equipped with NIMROD SR missile with an 8KM range.

Tags: 2012, FIDAE 2012, Julio A. Montes, V4N4, Volume 4
← M27, Part Two: From BAR to IAR – How the Marines Finally Got Their Infantry Automatic Rifle
The 4th Generation Glock: New Standards for Perfection →
Distributed at trade shows worldwide, Small Arms Defense Journal is a bimonthly publication that focuses on small arms, accessories, gear for the soldier, new products, industry news, and defense trade shows. The first issue of SADJ was Spring 2009, which launched at the LAAD show in Rio de Janeiro, Brazil. SADJ (pronounced “sage”) is targeted toward military, law enforcement, and defense industry professionals. Our job is to reach these groups and tailor content to their interests while producing a publication that is applicable to an international audience.