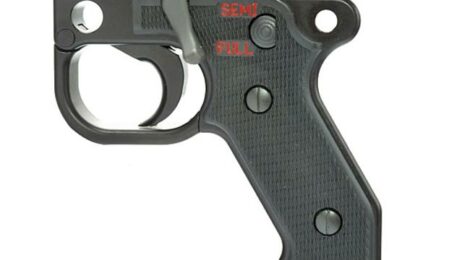 Ohio Ordnance Works Inc. (OOW) in Chardon, Ohio, USA, has been working on machine guns for over three decades and transitioned into government contracting in the 1990s.  The General Manager, Bob Landies, has devoted a lot of thought and design time to add-ons and weapon upgrades in response to what he hears from the soldiers in the field: thus, the new select fire M240 trigger group from Ohio Ordnance Works.

The OOW M240 select fire trigger group is identical in material construction, size, shape and finish to the standard M240/MAG58 trigger group, and drops right in as a replacement unit.  The patented changes on the interior involve adding a disconnector system and spring, as well as a selector.  The safety is the standard FN type safety.  The thumb operated selector switch has positive detent stops for semiautomatic and fully automatic fire, and the selector is removable with rotation when off the weapon; but once on the weapon it is physically held in place by the receiver.  Weapon operation is still open bolt firing.

There are several benefits of using this trigger pack.  The first is the ability to have single shot point firing without worrying about double or tripling on these precision aimed shots, lowering the possibility of collateral damage, and conserving ammunition.  The second is in many of the newer remote fired weapon stations.  The OOW select fire trigger group allows the designers to have a positive semiautomatic position with no chance of doubling or tripling, using existing fully automatic M240 series weapons.  This is a much less expensive option to purchasing new weapon systems that are semiautomatic only (also available from Ohio Ordnance Works, Inc.), and allows the weapon to be returned to the fully automatic role if required for infantry use.  Dedicated semiautomatic weapons are still a good choice in many remote weapon system platforms, but with this new OOW trigger group, clients can utilize existing stocks of M240s or MAGs.  The manufacturer’s suggested retail price is $485 each.

by SADJ staff on 26 August, 2011.
Tags: 2010, M240, Ohio Ordnance Works, OOW, V2N3, Volume 2
← The SIG P522
International Legal Affairs: Volume 2, Number 3 →
Distributed at trade shows worldwide, Small Arms Defense Journal is a bimonthly publication that focuses on small arms, accessories, gear for the soldier, new products, industry news, and defense trade shows. The first issue of SADJ was Spring 2009, which launched at the LAAD show in Rio de Janeiro, Brazil. SADJ (pronounced “sage”) is targeted toward military, law enforcement, and defense industry professionals. Our job is to reach these groups and tailor content to their interests while producing a publication that is applicable to an international audience.