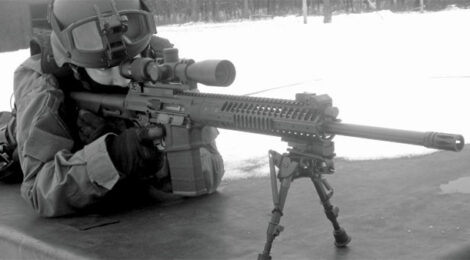 Right side of the standard carbine model with the 12 inch barrel. Notice the telescopic VLTOR EMod stock and folding backup sights.

LWRCI uses an interference fit between the barrel extension and the receiver. Cold, these parts do not fit. To install the barrel, the receiver must first be heated expanding the orifice, the barrel inserted, then it cools and contracts for the interference fit. Under use, this is one of the hottest parts of the weapon, which causes the same expansion. It makes sense to fit these parts while hot. Then they use a lock nut that allows them to put a very precise torque on the barrel. LWRCI felt the current semi-auto sniper rifles were just scaled up AR-15 type rifles with heavy barrels and believes these details have been overlooked when you consider the mission, the accessories, and the user.

LWRC has evolved their 5.56mm bolt carrier over the years and many of those changes were incorporated into their REPR. LWRCI basically scaled up their latest iteration of the 5.56mm bolt carrier group but removed the forward assist notches and added the grooved to the left side of the carrier where the cocking handle will engage. The bolt and carrier are coated with a proprietary Nickel Boron coating that is superior to the previous DuPont Teflon, and Nickel Teflon used. They also coat the barrel extension, the bolt, and the cam pin. Unlike previous 5.56mm iteration carriers, the impact key is not a separate component – it is now machined into the carrier increasing the strength. The bolt carrier also incorporates sand cuts on the running surfaces of the bolt carrier. These simply allow a place for sand and dirt to reside without causing interference to the bolt carrier.

The lower receiver is manufactured from a billet and accepts an SR-25-type detachable box magazine with a capacity of 5, 10 and 20 rounds. KAC, C-Products, Magpul LR20 Mag and DPMS magazines are all compatible for this rifle. The REPR was provided with C-Products 10-round magazines. Acquired for testing were 20-round C-Products magazines as well as the newly introduced Magpul PMag 20LR Mag. The selector lever settings are in the popular pictogram form and have a witness notch on the right side of the selector as well as selector settings on the right side allowing a left handed shooter to know the condition the rifle is in. The stock may either be fixed or retractable. The sample rifle was set up for a sniper rifle and was equipped with the MagPul PRS stock that is adjustable for length as well as cheek weld. The PRS stock is a little on the heavy side but in this authors experience is the finest precision stock for any black rifle. On the heavy barrel sniper variant of the REPR, the PRS’ weight balances the rifle. The lower was also equipped with a Magpul MIAD pistol grip and enhanced trigger guard. LWRCI has teamed with Magpul on all of their weapon systems and use Magpul’s stocks, pistol grips, trigger guards and magazines. The trigger used is manufactured by Geissele Automatics and is adjustable or fixed determined by the model. The sample rifle was equipped with the adjustable trigger that was a two-stage configuration which was very comfortable and smooth to pull. A good trigger is critical on a sniper rifle or any rifle for that matter. Another very innovative feature of the REPR is the ability to tighten the upper receiver so there is no play between the upper and lower receivers. Under the pistol grip is a screw that is tightened by the operator to the desired tension. This ensures a lifetime tight fit regardless to wear on the pushpin holes of the receiver and eliminates the requirement for aftermarket wedge devices. 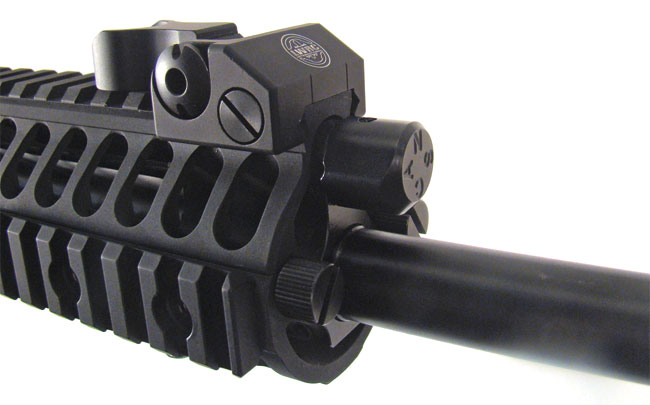 The folding front sight provided with the REPR. Also shown is the gas valve with four positions. This permits complete gas shut off, suppressed setting, normal conditions and adverse conditions.

Both detachable front and rear sights were provided on the sample rifle. The folding front sight attaches directly to the handguard/rail rather than the barrel. It has ears to protect the post and is activated and deactivated by a spring loaded lock. The rear is similar in that it is engaged and disengaged by a spring loaded pin. The rear sight is adjustable for windage only and the front for elevation only. Both sights provided were manufactured by Troy Industries with the LWRCI logo on them.

Overall the weapon was extremely impressive. The fit and finish was superb. Every attention to detail was paid and the best choices for the stock and pistol grip were made in my opinion. If this was my rifle these would be the exact accessories I would add. There were no machining scuffs or nicks on the rifle and the anodizing matched on the upper and lower receivers.
Testing was conducted using Silver State Armory (SSA) ammunition. SSA is known for manufacturing some of the highest quality duty and match ammunition in the industry at competitive pricing. Silver State Armory just moved to a state-of-the-art facility in Packwood, Washington where they have a 100 meter underground range and the facility meets United States Department of Defense requirements to manufacture military contract ammunition. They manufacture their own brass. All SSA ammunition is loaded with custom blends of powder geared towards the specific loading. They offer several loadings in 5.56mm, 7.62mm NATO, 6.8SPC and .499 LWRC. They are also one of the only ammunition manufacturers in the United States to manufacture armor piercing rifle ammunition in 5.56mm, 7.62mm NATO and 6.8SPC.

Function testing was done with their 150gr Nosler Accubond cartridge (SSA10084-N150). Approximately 200 rounds were fired for function testing with no malfunctions. Now is the opportunity to see if a hammer forged barrel and a piston have much effect on accuracy in a precision rifle. This load shot consistently just under 1 MOA at 100 yards. For accuracy the Silver State Armory 168gr Sierra OTM was used (SSA10084-OTM). This round consistently shot between 1/2 to 3/4 MOA at 100 yards. The accuracy of the REPR will challenge any bolt action sniper rifle on the market today as well as any other semi-auto out there. The combination of a premium quality barrel, match grade ammunition and an excellent trigger produced respectable groups by any sniper’s standards. Recoil was quite moderate for a semi-auto rifle. Engagement and follow-up shots were quick and accurate, which are the attributes that expand the capability and role of a sniper armed with a semi-auto. I suppose this ends some of the debates I mentioned earlier, however, it is my belief from looking at the multiple design and technology changes LWRCI has made that no one feature is singularly responsible for this performance. It is the proper combination of these design features and technologies working together as a system. This includes the ammunition.

The REPR has undoubtedly added to LWRCI’s opportunities to compete in both the U.S. and international markets on both 5.56mm and 7.62mm rifles. The REPR could be used as a police sniper rifle, competition rifle, military rifle or sporting rifle. It is just that versatile. It comes in carbine and rifle configurations and will serve any need that come up where 7.62mm firepower is needed. The REPR is already in service with the Drug Enforcement Administration F.A.S.T. (Foreign-deployed Advisory and Support Teams) as well as the DEA’s Office of Global Enforcement in Afghanistan and other less than friendly parts of the globe. These are being used in the Sniper/Assaulter role described previously as the teams generally helo insert to a target compound, clear it of bad guys, then take up sniper overwatch security duties while other members of the team or USSOCOM conduct their mission of searching for and destroying drug and weapon caches. The predecessor to the REPR, the SBR, is employed by the Pentagon Force Protection Emergency Response teams and can been seen daily in the overwatch positions facing the entrances to the Pentagon. Internationally, LWRCI has agreed to team with the King Abdullah II Design and Development Bureau to co-manufacture rifles in Jordan for use by the Jordanian Special Forces and Sniper Battalion.

Tags: 2010, Christopher R. Bartocci, V2N4, Volume 2
← U.S. Automatic Machine Rifle Model of 1909
IWA 2010 →
Distributed at trade shows worldwide, Small Arms Defense Journal is a bimonthly publication that focuses on small arms, accessories, gear for the soldier, new products, industry news, and defense trade shows. The first issue of SADJ was Spring 2009, which launched at the LAAD show in Rio de Janeiro, Brazil. SADJ (pronounced “sage”) is targeted toward military, law enforcement, and defense industry professionals. Our job is to reach these groups and tailor content to their interests while producing a publication that is applicable to an international audience.