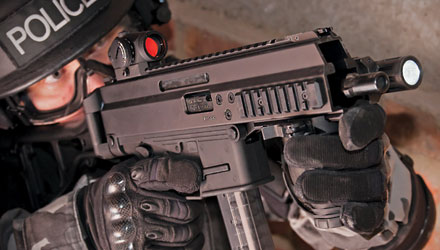 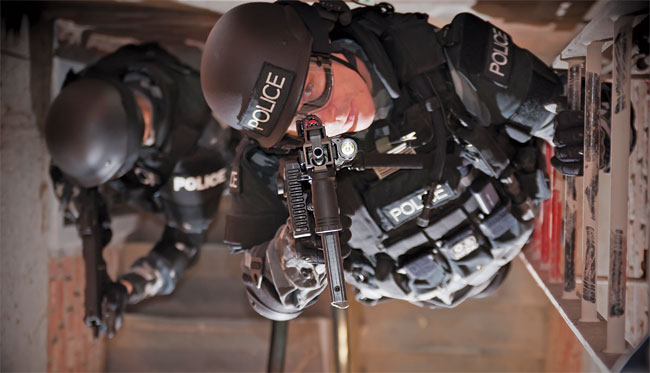 There is no real trick to reassembly of the APC9 just reverse the procedure but make sure that the cocking handle is properly seated in the bolt when the recoil spring is inserted.  Simple finger pressure will ensure that this accomplished.

With the stock and buffer assembly slide it in and then up into the receiver so no extra pressure will have to be maintained while remounting the trigger housing.

When the APC9 is disassembled one can see several different design inspirations internally and externally of the weapon.  For example some trigger parts, the hammer sear and trigger are similar to be M16 type but one must take the weapon apart to see it.  In the semiautomatic version any after market match trigger can be installed.  This is something that any carbine or match shooter would appreciate.

The lower receiver is molded polymer with an integrated handgrip.  This handgrip however can be milled away so any type of after market M16 handle can installed, again this feature is geared to sport shooter who demand such flexibility.  This is a clever design feature that helps keep the overall per unit cost of the gun lower while still accommodating individuals (or agencies) who wish to spend more for more individualization.

The bolt is square can only fit into the receiver one way.  The shape of the bolt reduces machining time and thus lowers the cost of production.  Here again cost savings with any procurement is an important consideration these days. 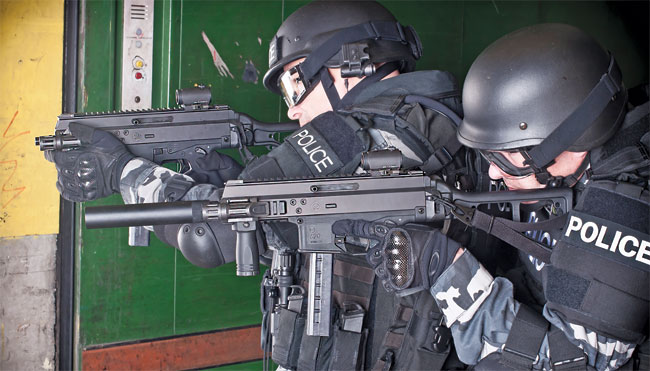 The magazines are the time proven MP9 magazines.  These are translucent and made of a polymer that is virtually indestructible.  Polymer magazines have proven to be safer than steel for operators to use.  For example an operator will always have a visual cue on how many rounds are left in the magazine.  It will also lend itself to replacement before a defect is discovered.  Steel magazines will often conceal any defects such as bent lips until actually inserted into the weapon and fired.  An operator can inspect the magazine beforehand and if a chip or broken lip appears he or she will know to DX or discard this magazine for another before going out on patrol or a new mission.

The bolt is a simple mass bolt that incorporates the extractor from the MP9.  To remove the firing pin just use a 2mm pin punch from left to right.  This is normally an armor level tasks but can be done in the field if required, though is not recommended.

The upper receiver is aerospace alloy provides strength and long service life.  The coating is hard coat anodized thus providing many years for hard use. The barrel is mounted in the upper receiver by three set screws on each side that secure the feed ramp and barrel mount.  To remove the barrel there is a special tool required that will dislodge the barrel for quick replacement and can be done in about 90 seconds.  The 3-Lug barrel uses the MP5 type mounting system for the suppressor or flashhider.  This would be a nice point if an agency already has MP5 in service but can still use the existing suppressor if they so care.

This feature is designed into the gun so any other calibers can be accommodated.  For example, in Italy it is only the 9x21mm caliber that is allowed for civilian sales.  The 9x19mm is considered by Italian legislation to be a war caliber and thus not available to civilians.  So far B&T already has several hundred guns on order in this caliber destine for the commercial market in several countries with this type of legislation.

As this article is being written, the APC9 is almost finished going through NATO qualification tests and the APC45 was just beginning.  This testing protocol is quite rigorous and includes the following tests:

The testing laboratories that B&T possess are impressive.  As a supplier of weapons and many accessories to NATO and non-NATO militaries worldwide B&T is compelled to ensure that everything they produce will perform to professional standards.  It doesn’t matter if this is the APR Sniper Rifle, the GL06 Launcher, the MP9 or any of the suppressors or accessories the company produces. Most of the B&T product line carries a NATO Stock Number (NSN) “This also includes our accessories,” Karl Brügger mentioned, “many units will think they are saving money by buying a handgrip for example that is half the price of something we make.  What they don’t realize however is that what they are buying is actually something made for the soft air market.  Some users will come back to us shocked when the so called “bargain” part literally begins to melt right off the rail after firing just a few magazines.”

The APC9 has already finished the NATO testing protocol. The MP45 was just beginning this procedure when the author visited the factory. 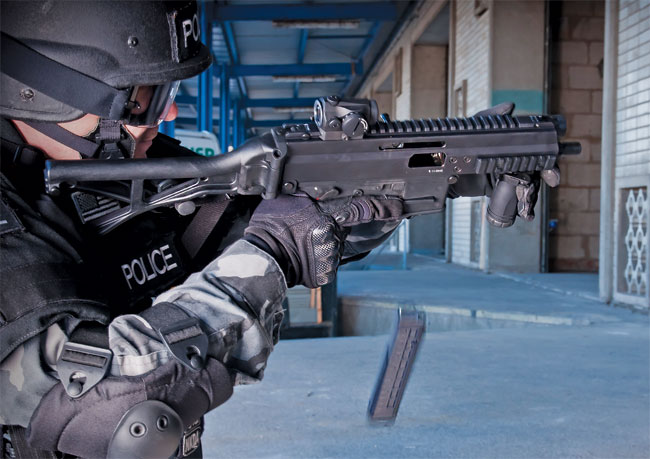 The author was given the opportunity to fire the prototype of the APC45 and was delighted how easy it was to control and fire.  The hydraulic buffer again does a very good job at keeping what is often thought of as a difficult caliber to employ and control.   It has all the same features as the APC but the magazines come in 12, 17 and 25 round sizes. The magazines are the same that B&T uses in the MP45 version of their MP9.

This author does have some criticisms of the APC9.  For example, the charging handle would be more ergonomic and easier to manipulate if it was a rubber coated knob as opposed to the steel bar.  It would be good if the retaining pins were mounted into the trigger housing so as not separate from the weapon when disassembled and be lost.  Aside from being very embarrassing for the user it could jeopardize the mission.  HK understood this and incorporated this small but nice feature on the G36.  The engineer in charge of the APC project told me that it was already foreseen in the final pre-series production units.

In closing, the author cannot say that the APC9 is really anything revolutionary, (except for the gas bleeding systems that wasn’t possible to test fire).  It just represents a solid, well thought out evolution of existing and proven weapon designs that when incorporated into a single package produces an outstanding product for any policeman, soldier or even sporting civilian.

Caliber
9×19 mm (other calibers to be available)

Grips
Integrated polymer, can be delivered precut or installed with any AR15 typ of handgrip

Gas Release for Subsonic Use
Yes

T&E Summary
Innovative combination of proven and new design concepts.  Lightweight, compact and very well constructed.  Just what one would expect from Switzerland.

Tags: 2012, Mark Zimmerman, V4N2, Volume 4
← Open Tip Match: When a “Hollow Point” is Not a Hollow Point
Industry News: Volume 4, Number 3 →
Distributed at trade shows worldwide, Small Arms Defense Journal is a bimonthly publication that focuses on small arms, accessories, gear for the soldier, new products, industry news, and defense trade shows. The first issue of SADJ was Spring 2009, which launched at the LAAD show in Rio de Janeiro, Brazil. SADJ (pronounced “sage”) is targeted toward military, law enforcement, and defense industry professionals. Our job is to reach these groups and tailor content to their interests while producing a publication that is applicable to an international audience.