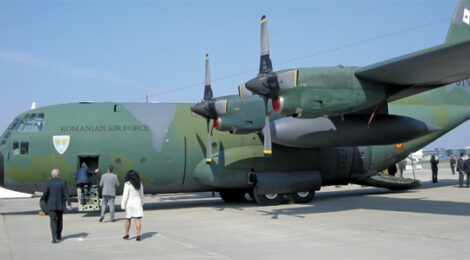 With the addition of Romania to the European Union in 2007, the EU stretched from the North Sea to the Mediterranean Sea, from the Atlantic Ocean to the Black Sea. This new territory allows ocean and land border access to approximately 300 million more people, with all the incumbent security and defense problems that are inherent in opening the EU to both these opportunities and threats. It was with this in mind that TNT Productions sponsored their third edition of BSDA, which was held on 13-15 April 2010 at the Romaero facility in Bucharest. Romaero is at the Baneasa Airport north of the city, and has access to the airport runways making the staging of airshows and airplane on-site displays convenient.

There was a significant international showing of defense and security products, but the small arms on display were primarily from the indigenous Romanian manufacturers. Romania has a well developed infrastructure of small arms manufacturing, and these groups, working under the international sales umbrella of Romarm, made a very respectable showing of their standard warhorses and new products. One theme that SADJ found as recurrent in the presentations and discussions was the entering of Romania into NATO, and the compliance issues with ammunition and weapon systems. Romania of course, like most NATO countries, wants to have their arms manufacturing inside their own country, and of their own design. Melding the NATO requirements to this desire is an involved process.

BSDA as a show is smaller than many found in Western countries, but it has a respectable 7,500 square meter footprint inside two buildings, as well as a large outdoor display, with highlights from many industries. Many heavy hitters from the U.S., UK, Europe, Turkey, and others, such as General Dynamics, Lockheed Martin, Bumar, BAE were there. There were over 200 exhibiting companies, representing 15 countries with 8,680 attendees being recorded. In our discussions with exhibitors, they seemed pleased with not only the face time they had gotten with the Romanian government, military personnel and potential business partners, they were also pleased with the amount of international delegations that had shown up. One contractor had serious discussions with a three-star Iraqi general and his staff in regards to small arms and training, and another discussed the opportunities he had with the Serbian delegates. The show was well attended with quality contacts, and the fact that it is also an Aero Show brought in many members of the general public as well. We found that almost all of these public attendees were either involved in the military as families, cadets, or respected military retirees, and the signal to noise ratio for secondary contacts appeared to be very good. Long-time show exhibitors have learned that if a show provides the quality delegates and buyers, it makes it worth the trip, but the associated public perception of their company and products can help win hearts and minds of the end users and buyers as well. It’s one reason that you’ll see professional behavior on the part of exhibitors who are seeing young children and teens on a family day, giving them tours and letting them try out the simulators. These may be children or cadets today, but in ten years they will be officers and NCOs.

Romarms and all the small arms factories we spoke with in Romania requested that SADJ come to Romania and go from facility to facility testing the small arms and ammunition. We plan to do so as soon as possible and bring the report to our readers.

TNT Productions has the BSDA show scheduled for April 2012, dates to be determined, but they also are starting a show in Split, Croatia, called the Adriatic Sea Defence & Aerospace exhibition and conference. This is scheduled for 6-8 April 2011, and a significant number of both exhibitors and delegates from different countries told us they would be attending. For more information on ASDA, email at asda@tntexpo.com.

This Puma 330 L helicopter has been upgraded to day/night attack configuration along with modifying the controls and radar. Note what appear to be 57mm UB-16-57UMP rocket pods and NTD Guided Missile modules, as well as the nose gun stinger – a single barrel 20mm. 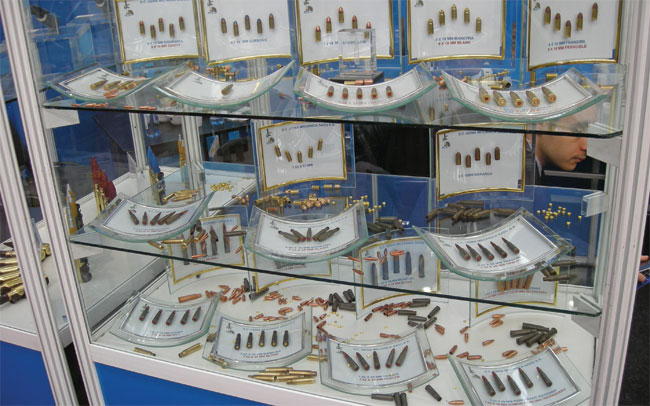 S.C. Uzina Mecanica Sadu S.A. is a Romanian ammunition manufacturing facility for small arms ammunition. Aside from regular production, there are two items of note: a 9x19mm subsonic round using a heavier projectile, so the round is under the speed of sound without barrel porting in a suppressor like the integral can on the MP5 SD, this is for use with muzzle suppressors, and the new production of 5.45x39mm tracer is offered. (www.umsadu.ro) 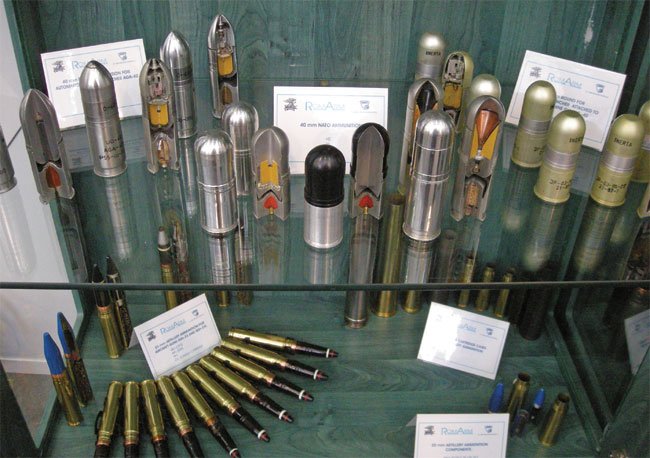 U.P.S. Dragomiresti S.A. is a Romanian company making artillery ammunition but they also make Composition B, and can fill liquid smoke rounds. They make 60mm, 81mm, 82mm, and 120mm mortar rounds as well as 23mm, 25mm, 30mm and 35mm ammunition. 23mm ammunition for the Gsh-23 machine cannon is shown, as are the various 40mm rounds including what is apparently the new longer cased 40x74.5mm for the new Romanian AGA-74 Grenade Machine Gun that we have not seen yet. (www.upsdragomiresti.ro) 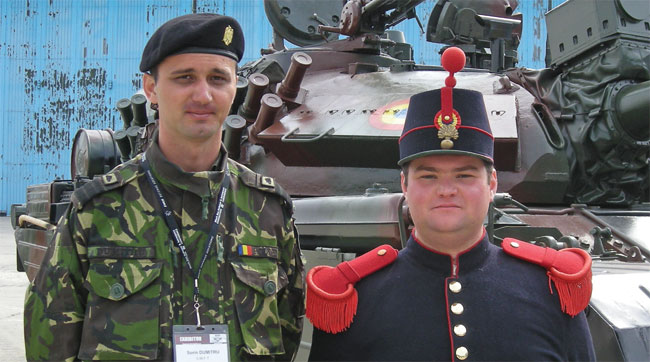 The New and the Old: SFC Dumitru from the Combat Unit Training School is in his uniform as a modern Romanian Tanker, next to Emil Boboescu from the living history group the Military Traditions Association (www.traditia-militara.ro). Emil is in the uniform of a PFC (Lance Corporal) in the 4th Line Infantry Regiment circa 1859: this was the formation of the Old Kingdom period, where the form of modern Romania originated. They are standing in front of a TR-85M1 Romanian Main Battle Tank with its 100mm rifled main gun, and 7.62x54R PKT coaxial, as well as a manually aimed DShKM 12.7x108mm machine gun on top.

S.C. Carfil S.A. had their normal mortar, SPG-9, and RPG-7 display, with two additions – the new PG-7 EI thermobaric round for the RPG-7 type launcher that has a tremendous impact for a shoulder launched grenade. They have also changed their manufacturing process on the AG-7 (RPG-7V type), deleting the bore chroming process and hardening the steel tube in a different manner. While some factories inform people that the life of an RPG-7 type tube is only 250 rounds, that low round count is not this author’s experience, and the Carfil engineers claim that either chrome lined or the new special heat treated will give a barrel life in the thousands of rounds. (www.carfil.ro) 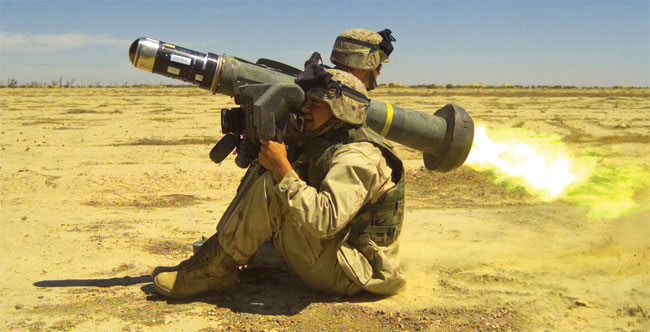 Lockheed Martin’s Hellfire II; the AGM-114R (Romeo) – it’s not just for Air to Surface anymore. Lockheed Martin had the newest version of the Hellfire on display: one major change is that this one unit handily replaces the four others that are currently offered, and the blast-fragmentation effect of the II is within 10% of the effect of the thermobaric round, and still has its shaped charge and reactive armor capability. The Norwegian Navy is using the earlier model on small watercraft with a Kongsberg type gyro that they made in Norway, as well as a ground tripod the Norwegians are using as a lightweight platform to take the Hellfire with infantry so they aren’t fully dependant on air support. Hellfire II has three different trajectory modes to choose from including a newer method of flying low and hitting 90 degree targets like cave openings or doorways. This new ground capability gives an 8 km range from surface launch. The DAGR kit adapts 2.75inch/70mm rockets to the guided missile technology used in Hellfire, with a 7 km range from sea level launch. This allows lock-on-at-launch or lock-on-after-launch capability in a four rocket pod that mounts up on an aerial platform. As shown in the picture, 8 DAGRs and 3 Hellfires can be mounted. There is talk of adapting the pods to ground mounting which SADJ immediately envisioned mounted on a Humvee, of course. The famous Javelin infantry portable rocket system provides 2.5 km range with tandem shaped charges to defeat reactive armor. (Courtesy Lockheed Martin) (www.lockheedmartin.com) 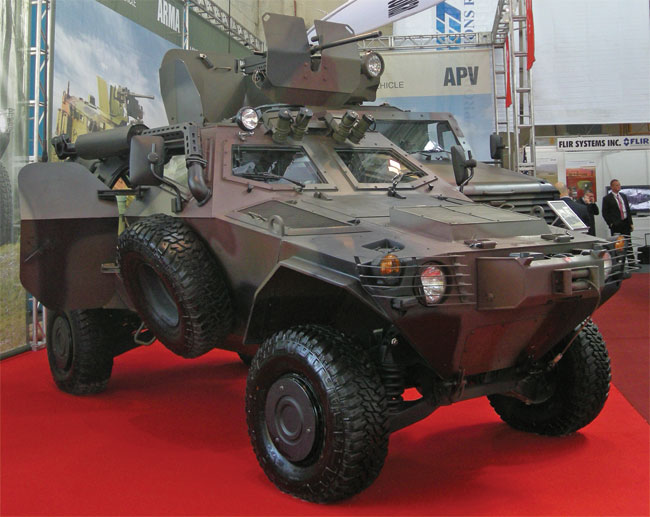 Otokar is a Turkish vehicle manufacturer and they are working in the U.S. market with AM General. The item of most interest to SADJ was the Cobra vehicle, a 4-wheel drive armored vehicle with anti IED design, good speed, nice cupola for .50 BMG with back and side armor protection for the gunner. The Cobra shares many parts with the Humvee. There are numerous models, but the Cobra can basically achieve 110km/hr highway, 8km/hr in water, and on the armored open turret model shown, seats six comfortably. (www.otokar.com)

IOR is the Romanian optics manufacturing company that recently branched out into night vision, offering good quality variants of most of the West’s ToE as well as some very much improved variations of the Combloc staples such as the IOR LON-4x (shown). The LON-4x is a rugged, 4x night vision weapon sight that provides excellent observation, target acquisition and aiming capabilities. There are a variety of image intensifier tube configurations to fit into a wide array of budgets. IOR also had some thermal imaging in their opto-electronics display but we were unable to gather more information. (www.ior.ro)

Uzina Mecanica Plopeni is another of Romania’s munitions manufacturers that has a midrange as well as artillery program with 20x102mm (M61A1, M39 cannons) (shown) and 23mm, 30mm, and they have added 40x53mm for MK19. Their 25mm program includes Armor Piercing Fin Stabilized Discarding Sabot with Tracer- APFSDS-T 25mm. (www.ump.ro) 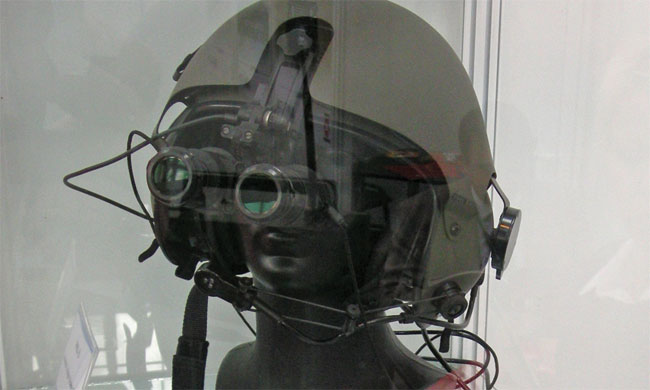 Bumar Group from Poland was only showing their opto-electronics but discussing all other programs like the Radwar group. PCO Joint-Stock company makes high quality NV units, and the NVG units SADJ was most impressed with were the PNL-2 and the PNL-3 Aviator’s units. www.bumar.com

S.C. Uzina Mecanica S.A. manufactures the larger caliber machine guns including the modern DShK-M (top), and their new DShK in .50 BMG that they refer to as the “12.7mm MG,” DShK mounts, the 14.5mm KPV and KPVT, as well as the twin barreled 30mm GSh-23mm Aircraft MG (bottom). Their new automatic grenade launcher is called the AGA-74 and uses a new ammunition, the 40x74.5mm, which is new to the planet. AGA-74 range is claimed as 1,550 meters, rate of fire is 380-450rpm from a 10-round drum magazine and operation is select fire. None were on display, and the staff was not interested in discussing at this point. They manufacture small arms calibers as well as 12.7x108mm, and 14.5x114mm, including the B32 and BZT rounds. They also have hand belt loading devices for the DShK, KPV and now for the YAK-B (right). We noted their new 9x19mm submachine gun is a Kalashnikov type action, but could not get hands-on with it nor with their Model 2000 9x19mm pistol. (www.umcugir.ro)
by Dan Shea on 3 January, 2012.
Tags: 2010, Dan Shea, V2N4, Volume 2
← IWA 2010
Interview with Buddy Howells (Grandson of Col. George M. Chinn) →
Distributed at trade shows worldwide, Small Arms Defense Journal is a bimonthly publication that focuses on small arms, accessories, gear for the soldier, new products, industry news, and defense trade shows. The first issue of SADJ was Spring 2009, which launched at the LAAD show in Rio de Janeiro, Brazil. SADJ (pronounced “sage”) is targeted toward military, law enforcement, and defense industry professionals. Our job is to reach these groups and tailor content to their interests while producing a publication that is applicable to an international audience.