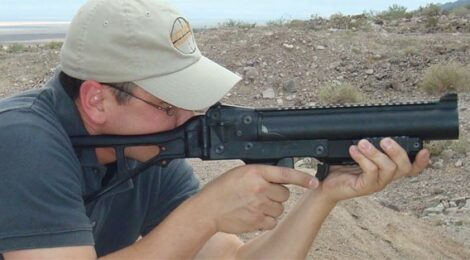 Switzerland is well known for its exquisite time pieces, fine chocolate, and its highly professional banking practices.  The firearms manufactured by the Swiss are of equal quality, bar none.  Based upon the recent innovations at Brügger and Thomet, the new GL-06 may become the de facto leader in 40mm grenade launching platforms.

Use of the B&T GL-06
Intended as a secondary weapon, the GL-06 cannot be mounted to a primary weapon.  In this regard, use of the GL-06 is necessarily limited to specific functions and missions.  While this may appear to be a negative aspect to the design, the lack of mounting hardware forces the user to contemplate the requirements of the mission.  With the ever increasing real estate for mounting options on battle rifles, weight considerations must be contemplated; if a 40mm system is not required, it need not be mounted and carried on the primary weapon.  Unlike the mounted M203, the GL-06 requires the user to actively utilize the system as a secondary weapon, forcing the user to determine whether a 40mm system is required for the intended mission.  Although designed as a secondary weapon, the GL-06 is capable of serving in a multitude of roles, whether as a platform for less-lethal munitions, or as a support weapon in land warfare.

Operation and Design
The GL-06 is a single shot, break action system.  Like most 40mm systems, the GL-06 is designed with a double-action only trigger.  This means that the trigger pull requires deliberate and conscious thought to engage – an important quality when firing high explosive rounds down range.  The internal hammer also serves double duty as the firing pin, similar to the design of the Heckler and Koch Model 69 system.  As a break action weapon, the system’s design heralds back to the original 40mm system – the M79 grenade launcher.  Unlike the M79, the GL-06 is lightweight, offers better iron sights, the ability to mount optional optical sights, and provides features that were never considered when the M79 was produced.

Unlike the M79, the GL-06 will accept any type 40x46mm ammunition.  This is an important feature due to recent advances in 40mm rounds with integrated camera and data transmission capabilities, advances in 40mm medium velocity rounds capable of firing 800 meters, and advances in the development of alternate payload 40x46mm rounds.

The GL-06 rear sight features a ghost-ring sight for fast and accurate target acquisition, combined with a protected front blade sight.  The safety is a simple push through design that locks the hammer from forward movement, and prevents any accidental discharges.  The system is fully ambidextrous, capable of left or right handed fire without modification.  In addition, the system features both left and right side sling attachment points for added flexibility.  Brügger and Thomet is known for its innovative aftermarket stocks, allowing various submachine guns to be used with a variety of equipment.  The same stock designs are available for the GL-06. 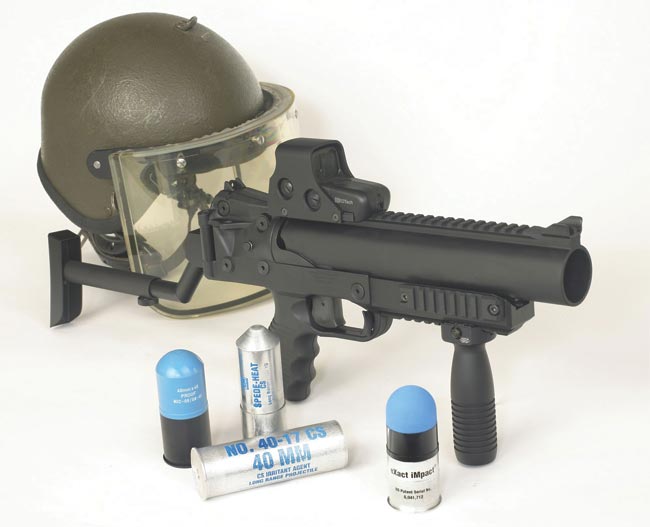 In response to the needs of end users, a Mil-Std 1913 Picatinny rail has been incorporated onto the top of the barrel, while three Mil-Std 1913 Picatinny rails adorn the 3, 6, and 9 o’clock positions on the receiver.  Unlike prior generation 40mm systems, the prolific use of Picatinny rails allow the user to mount optical sights, a forward grip, or illumination tools to the system.  The ability to mount an optical sight alone presents an increase in accuracy from prior 40mm systems, and gives the user an easier sight picture to define when in a combat or stressful environment.

The allowance to add accessories adds further value to the system when faced with less lethal and crowd scenarios.  The ability to effectively make a show of force may act as a deterrent and prevent the need to actually use force.  The capability to mount any variety of accessories to the launcher gives the end user flexibility to configure the GL-06 to the intended mission.

Off to the Range
The GL-06 is a robust and hardy system that proved to be ergonomically simple and comfortable to shoot.  Unlike earlier 40mm designs, the lack of large external metal parts ensured that the weapon could be effectively fired within the desert environment, and without the fear of being burned by exposed metal components.  In comparison, other 40mm systems were almost impossible to fire effectively within the desert environment due to the need to place the shooter’s face directly on an exposed (and hot) metal receiver.  This was not an issue with the GL-06.

The test unit was not outfitted with an optical sight.  According to Brügger and Thomet, the iron sights are zeroed to 25 meters for use with standard 40mm ammunition.  When used as an emergency backup sight for high explosive grenades at close range, Brügger and Thomet offered the following guidelines to adjust point of aim:

In practical use, the guidelines were effective.  After firing several rounds, estimating both range and point of aim became intuitive and easy to achieve.  This is not to mean that all rounds fell on target – to the contrary.  However, firing the weapon and getting the round “close enough” was easily accomplished with experience and practice. 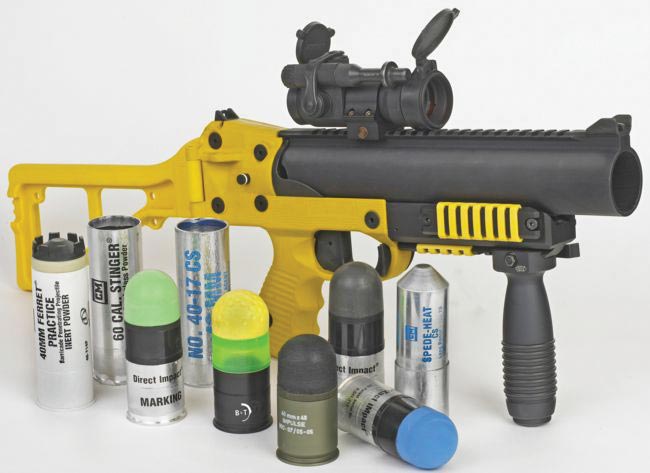 Real World Use and Experience
In 2008, the GL-06 chosen by the French National Police for use as a less-lethal 40mm weapons system.  Karl Brügger, Managing Director of Brügger & Thomet AG commented, “B&T is very happy to be able to assist the French National Police in upgrading their public order capabilities.  The addition of the GL-06 Less Lethal Launcher will lead to increased order and stability in France as well as a reduction of injuries to policemen and violent subjects.  B&T will continue to focus on close cooperation with all police and military partners with this product and all the other products we produce. We are excited to work the French National Police and feel confident that the system will fill an important niche in their missions to maintain order and public safety.”

Brügger and Thomet was founded in 1990 to produce suppressors for the Swiss domestic market.  Ongoing research and development by Brügger and Thomet has demonstrated that the company is highly capable of designing and building top quality products for the international market.  The B&T GL-06 is no exception.

by Jason Wong on 23 August, 2011.
Tags: 2011, Jason Wong, V1N4, Volume 1
← High Standard Guns of WWII
LAAD 2009 →
Distributed at trade shows worldwide, Small Arms Defense Journal is a bimonthly publication that focuses on small arms, accessories, gear for the soldier, new products, industry news, and defense trade shows. The first issue of SADJ was Spring 2009, which launched at the LAAD show in Rio de Janeiro, Brazil. SADJ (pronounced “sage”) is targeted toward military, law enforcement, and defense industry professionals. Our job is to reach these groups and tailor content to their interests while producing a publication that is applicable to an international audience.