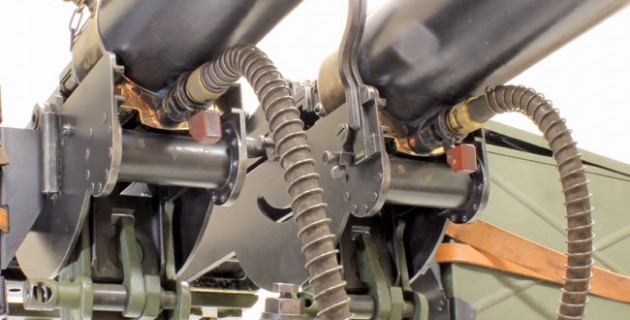 Above: The steam condensing tube and valve arrangement of the m/36 differs from the M1917A1 Browning. The valve sits under the rear bronze end cap and has three positions denoted as S (Stangt – Closed), V (Vattenavloppet oppet – Water drain open) and A (Angavloppet oppet – Steam drain open). The steam condensing hoses attach to the valve and exits to the front of the gun.

Early Swedish Machine Guns
Sweden was not shy in their attempt to modernize their army at the turn of the twentieth century by equipping it with modern machine guns.  The m/95 Maxim, the m/99 Nordenfeldt (Konstruction Bergman-Nordenfeldt) and m/00 Hotchkiss all found a home at one time or another in the Swedish army from 1895 to 1914.  From 1914 the m/14 Schwarzlose was adopted and widely used.  The first 511 Schwarzlose machine guns were imported from Austria but in 1917 Sweden began making them at the Carl Gustafs Stads Gevärsfaktori (GF) in Eskilstuna.  A total of 753 Schwarzloses were built in Sweden between 1917 and 1939.

Enter the System Browning
Sweden had no separate Air Force prior to 1926; instead the Army and Navy each had their own sections of aviation.  The Schwarzlose could not be configured to be synchronized to fire through the arc of the propeller and in the 1920s tests were conducted with the M1919 Colt aircraft Brownings that were deemed successful.  This ultimately led up to Sweden purchasing a total of 185 M1919s from Colt from 1920 to 1930. Swedish soldiers train with the Kulspruta m/36 mark (ground) on the m/36 Lavett soft mount tripod. Note the use of the 5x25 power optical sight mounted on the left side of the cradle.

It did not take long for Sweden to recognize the value of Browning’s operating system.  The Browning was a simple design, extremely reliable and very cost effective to produce.  In 1930, the director of Carl Gustafs Stads Gevärsfaktori noted that they could produce 50 water-cooled M1917A1-type Brownings for the same price as 30 Schwarzlose machine guns, which were still in production at GF.  Thus, GF and Sweden embarked on manufacturing machine guns based upon the Browning system.  This included the Kulspruta (Ksp) m/22 air-cooled aircraft gun introduced in 1930 and the first water-cooled Browning developed by GF in 1929 as the Ksp m/14-29.  This gun was mounted on the m/14 Schwarzlose tripod.  Thus, the m/14-29 designation identified the m/14 tripod and the m/29 as the designation of the gun.  Between 1930 and 1936, Carl Gustafs Stads Gevärsfaktori produced 274 of the Ksp m/14-29s.

The Kulspruta (Ksp) m/36 mark (ground)
The m/14-29 Browning system water-cooled machine gun was upgraded in 1936 to fire the powerful 8x63mm sk ptr m/32 ammunition.  With this powerful, hard-hitting, long range cartridge, the m/14 Schwarzlose mount was deemed unsuitable for long range indirect fire and a new soft mount Lavett was adopted.  Gunnar Johnsson, Sweden’s foremost small arms designer, developed the soft mount Lavett.  This heavy ground mount had a special cradle buffered by strong springs that guaranteed accuracy by reducing vibration as the gun fired.  In conjunction with an elaborate traverse and elevation mechanisms and a 5×25 power optical sight, the long range effectiveness for the purpose of indirect fire of the m/36 was phenomenal.  Only active Army field units were issued the m/36 machine gun on Lavett soft mounts.  Second line units had their m/36 guns mounted on the m/14 Schwarzlose mount because they were easier and cheaper to produce. The muzzle booster of the m/36 is adjustable by exposing more or less of the gas escape holes. Adjusting allows a faster or slower rate of fire.

While the m/36 was based upon the operating principles of the Browning M1917A1 water-cooled machine gun, there were differences even though the guns appeared similar.  The m/36 used spade grips rather than the pistol grip arrangement as found on the U.S. M1917A1.  If the m/36 mark (ground) was mounted on the m/14 Schwarzlose tripod or the customary infantry tripod, standard spade grips attached directly to the gun were used.  If the m/36 was mounted on the single or double buffered soft Lavett mounts then the grips were removed and the spring loaded buffer was added to the back plate.  The Spade grips were an integral part of the of the side plates of the cradle.  Additionally, the steam tube and valve arrangement, (patterned after the m/14 Schwarzlose system) was relocated to the bottom rear of the water jacket thus eliminating the long steam tube assembly that ran along the axis of the gun along the top of the water jacket as found on the M1917A1.  On the muzzle of the m/36 there is an adjustable gas port that assisted in recoil that could be used to increase or decrease the rate of fire.

The Kulspruta (Ksp) m/36 lv dbl
An added benefit was the m/32 round had a range of 5.5km (3.4 miles, or nearly 18,000 feet.  Thus, in the anti-aircraft role, it could reach high enough to damage aircraft at significant altitudes.  This being the case, a twin gun arrangement (lv dbl – twin AA) was created for anti-aircraft work. The twin anti-aircraft m/36 guns were not just a matter of mounting two guns in a special cradle on an anti-aircraft tripod.  The guns were actually different and made as a pair with the left gun fitted for left-hand feed and the right gun fitted for right-hand feed.  The cocking handle of the left-hand gun was on the right side and the cocking handle of the right gun was on the left-hand side.  All sighting and aiming was done from the left gun only.  The right gun had no sights whatsoever, whether anti-aircraft, front post or rear leaf.  Each gun had its own special spring buffer assembly for the right and left guns that were different in that they contained the safety and trigger.  The position of the safety and trigger in relation to each gun was different.

The trigger was a red vertical bar that was placed to the outside of the spring buffer tube of each gun, to be operated by the thumb of the right and left hand.  Thus, each gun was operated independently from each other.  The left or the right could be fired alone or both together depending on target, ammo supply, operability, and operator preference.  The safety was a spring loaded knob mounted on a ring to the inside on the spring buffer tube.  By pulling up the knob and rotating the ring around the outside of the spring buffer tube, a stop was positioned in front of the trigger to prevent trigger depression.  Again, each gun was operated independently.

← The U.S. Marine Corps’ New M27 IAR: Part One
A Fist Full of Firepower: The Rock Island Armory .22TCM →
Distributed at trade shows worldwide, Small Arms Defense Journal is a bimonthly publication that focuses on small arms, accessories, gear for the soldier, new products, industry news, and defense trade shows. The first issue of SADJ was Spring 2009, which launched at the LAAD show in Rio de Janeiro, Brazil. SADJ (pronounced “sage”) is targeted toward military, law enforcement, and defense industry professionals. Our job is to reach these groups and tailor content to their interests while producing a publication that is applicable to an international audience.