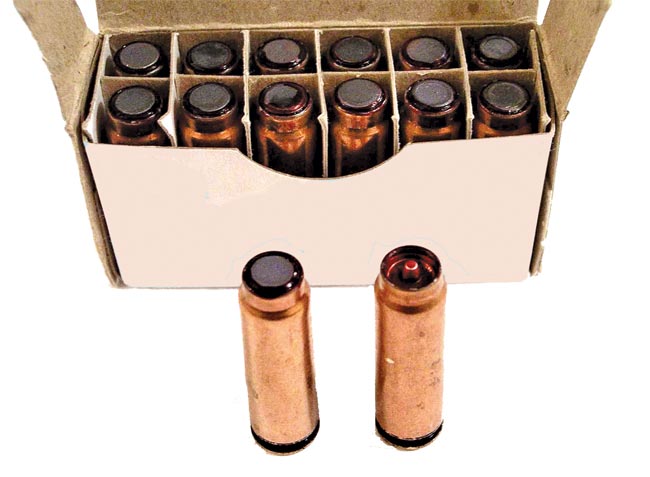 What this means is that although the pistol is highly specialized to fire this specific round, it is the ammunition itself that is “silent.” In the United States, each individual round is considered to be a silencer subject to the registration/transfer requirements of the National Firearms Act in its various incarnations.

In addition to shooting, we had the opportunity to disassemble a loaded cartridge to examine, photograph, and measure the parts. An inertial hammer-type bullet puller easily dislodged the projectile itself. The piston has a conical projection on its front, which inserts into a hole in the base of the bullet. The purpose is to keep the projectile centered as it is being accelerated during firing.

We decided to fire the case after pulling the bullet in an attempt to drive the piston out intact. The necked-down portion of the case was quite successful in keeping the majority of the piston captured. However, the forward portion of the piston separated and was recovered from the backstop used. We estimate that the dimensions of the piston are in the vicinity of 8.91mm diameter and possibly 5-8mm length. Once some of our fired cases bleed off pressure, we will section one and get better piston length.

Complete half-section of the SP-4 silent pistol cartridge showing the projectile in place, the driving piston, and the powder charge. (Dan Shea photo)

The projectile is a mild steel cylinder (flat nose and base) measuring 28.4mm length and 7.63mm diameter. There is a 2mm brass band to engage the rifling at the forward portion of the projectile. The projectile weighs 155.4 grains, and it is estimated that the powder weighs in the vicinity of 3.5 grains.

Testing and Evaluation
Testing was performed on a military range. Weather conditions were ideal with a temperature of 83 degrees F (29 degrees C), relative humidity of 37%, and a station pressure of 676 mmHg. The altitude was 3,232 feet and there was no measurable wind.

On the range, we performed three separate tests: sound levels, velocity, and penetration of body armor and cinder blocks.

Sound Measurements
All measurements were done utilizing the protocol specified in Mil-Std-1474D. The meter, a Larson-Davis model 800B with a 1/4 inch LD-2530 pressure microphone, is a Type 1 precision sound meter in current certification. Prior to the start of measurement, calibration was checked with a recently re-certified Larson-Davis CA250 calibrator. Measurements were taken at the “reference” location of 1 meter to the left of the muzzle, 90 degrees to bore axis, and 1.6 meters above ground. Grass was not available, so measurements were made over compacted dirt.

In order, the individual shots of the 5-round string were measured at: 125.0, 124.5, 124.5, 123.8, and 125.0 dB. The overall average was 124.6 dB. First round “pop” is defined as to how much louder the first round measures compared to the average of the remaining rounds. While it was calculated, these are individual silenced cartridges, and the meaning of first round “pop” in this instance is not germane. The standard deviation was 0.44, indicating excellent shot-to-shot consistency.

Velocity Measurements
A Pact timer/chronograph was oriented with the skyscreens (spaced 24 inches) placed approximately two feet in front of the firing position. The skyscreens were approximately 1.6 meters above the ground so that we could obtain both sound and velocity measurements on the same cartridge. This was important to conserve ammunition due to its excessive cost and poor availability. In order, the velocity measurements were 625, 615, 624, 617, and 626 ft/sec for an average of 621 ft/sec. This calculates a muzzle kinetic energy of approximately 133 ft-lbs.

Terminal effects
We were unable to formulate ballistic gelatin in order to obtain information on the effectiveness on flesh. This will be the subject of a later study. However, information is available for comparable projectile weights and velocities. Based on the bullet weight of 155-grains and kinetic energy of 133 ft-lbs, the projectile certainly has enough energy to be lethal at reasonable close range. We did not shoot paper targets for accuracy. We felt that this was not necessary simply because the weapon system was intended and designed for exceptionally close ranges, probably less than 3 meters.

We did perform basic penetration tests. When fired at standard Kevlar Level-2 body armor, it just penetrated completely with the projectile being recoverable from the vest itself. While it will not be lethal through a vest, it will cause definite traumatic injury. It also penetrated a standard cinder block. 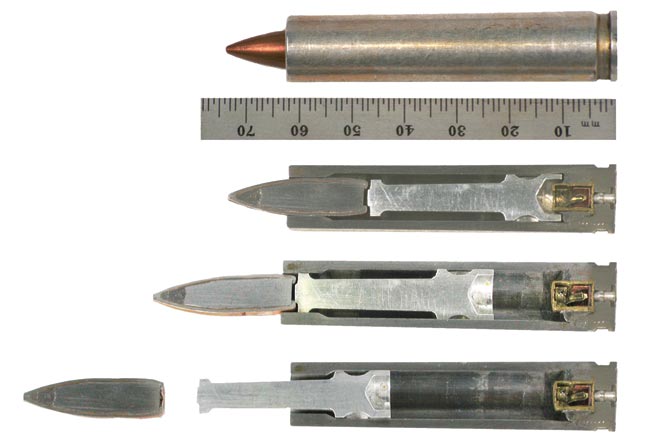 PZAM silent captive piston round. This is an older cartridge for the double-barreled S4M silent pistol, not the PSS. This is included to show a piston that extends well beyond the mouth of the cartridge when fired. (Dan Shea photo courtesy MOD Pattern Room)

Proposed Future Tests
The performance of this cartridge in ballistic gelatin (with conventional photography as well as high speed video) will be of benefit in extrapolating and analyzing wound potential. While it is obvious that this has been used successfully operationally, we do not know of any autopsy reports.

In addition, we would like to perform high speed video analysis of the weapon cycling during firing for motion analysis of exactly how the floating chamber functions. To the best of our knowledge, this has not been performed. It is estimated that a frame rate of 3,000 frames/second should be adequate.

Summary and Conclusions
The PSS pistol and its specialized SP-4 captive piston silent cartridge is a highly specialized purpose weapon. Its suppressed sound pressure level of 124.d dB is in the vicinity of a suppressed .22 rimfire pistol and would definitely qualify as “Hollywood Quiet.”  With a muzzle velocity of 621 feet/second and a 155-grain projectile, the kinetic energy of 133 foot-pounds is definitely lethal. The PSS pistol with the SP-4 captive piston silent ammunition was specifically designed for close-range covert elimination of targets. It is our opinion that this weapon/ammunition combination is well chosen for this task.