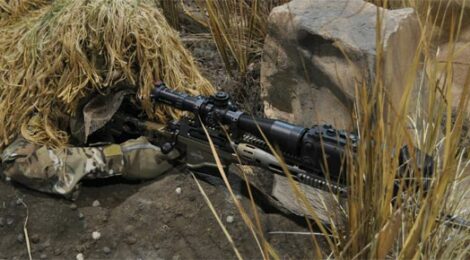 The Association of the United States Army held its annual meeting on October 5-7, 2009 at the Walter E. Washington Convention Center, Washington DC.  As one of the premier showcases demonstrating developments in the defense industry, more than 500 exhibitors from more than a dozen countries displayed their products and services.  Displays included cruise missiles, unmanned aerial vehicles, small and medium caliber small arms, and armored vehicles.  Small Arms Defense Journal was present to report on new products and advances within the defense community.

Camelbak
Camelbak introduced the Flow Meter, an intelligent personal hydration accessory that can be customized based on individual needs and activity level.  It eliminates the risk of running out of water and the hassle of taking the pack off to see how much is left.  The meter provides four functions – it allows the user to know how much water has been consumed, ensures personal hydration goals are met, tells the user how much water remains in the reservoir and the approximate time until empty.  The meter can be integrated with any Camelbak reservoir.

AAI
AAI continues its research and development of telescoping ammunition.  Two variations of telescoping ammunition (cased and caseless) are now available.  The caseless ammunition is 50% lighter than conventional ammunition of comparable caliber, requires 40% less volume than conventional ammunition, is fully consumed within the firing sequence, and features a high-temperature ignition propellant.  The cased ammunition is comparable to the caseless version, with the exception of slightly less weight savings (40% for cased, versus 50% for caseless) due to the cartridge case.  Key objectives to the program include reducing the weight of the battle rifle to the war fighter, lower ammunition weight by 40% or more, and increased ergonomics.

Barrett Firearms
Although very little information was available for public disclosure, the Barrett 25mm anti-material rifle was on display.  Featuring a 10-round magazine, the rifle is reportedly comparable in size and weight to the Barrett M107 rifle chambered in .50 BMG.

SAAB
Saab displayed their new Light Anti-tank Weapon as a potential replacement to the legacy AT-4 anti-tank weapon system.  In June, 2009, a successful live firing demonstration of NLAW was conducted in the Gulf region.  A number of missiles were fired, by local gunners, against various targets including moving, hull down and soft targets.  The focus was to demonstrate that the system works under severe desert condition that comprises sand, dust, and very high temperatures as well as with gunners following a training program that allowed not more than roughly 10 hours of basic skills training.

The NLAW is the first weapon to give a single soldier the ability to destroy a modern Main Battle Tank (MBT) with a single shot from any angle.  Due to its Overfly Top Attack mode, it can even engage MBTs in front attitude, as well as hidden targets or targets that are partly obscured.  Its guidance system makes it very easy to use and provides a very high hit-and-kill probability.  It is an exceptionally light missile system, making it ideal for light infantry forces in any environment including built-up areas.  It has been developed and tested for use in any environment from arctic, desert, and sub-tropical, as well as both day and night.

The RAAM may be the grenadier’s new best friend.  Weighing less than a pound, the ballistic computer will compensate for slope to the target position.  No longer need a grenadier worry about firing short when firing upwards.  Programmable for different types of ammunition, the RAAM utilizes two CR123 batteries, is night vision compatible, and mounts to either an M203 or M320 via standard Mil-Std 1913 Picatinny rails.

The newly designated MK 13 MOD 0 40mm Enhanced Grenade Launcher Module (EGLM) quickly mounts to the underside of either SCAR platform or can be used in a stand-alone platform similar to the M79, providing an additional punch to the individual warfighter’s firepower.  Look for a review of the MK 13 MOD 0 40mm EGLM in a future article. 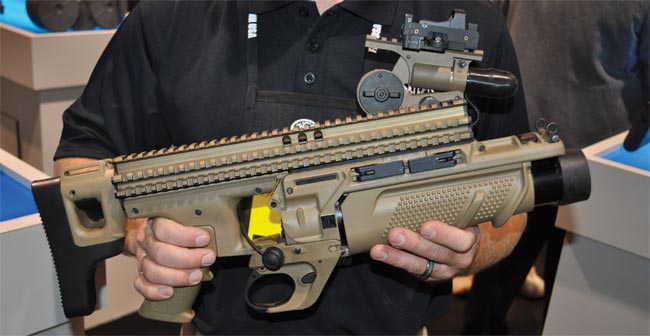 General Dynamics
General Dynamics displayed a new programmable Orion FCS 40mm weapon system capable of firing smart muntions.  The unit is comprised of two parts: the weapon sight and the weapon.  Upon capturing the target within the weapon sight, a laser is used to measure distance to the target and programs the 40mm cartridge.  Unlike traditional 40mm cartridges, the smart munitions appear to be fired electrically and not via a traditional firing pin.  Upon firing, the munition calculates the distance from the muzzle, arms itself, and detonates at the pre-programmed distance.

While seemingly experimental in nature, the system shows promise to revive interest in parameters created in the OICW weapon project.  The system is reportedly adaptable to existing 40mm M203 systems.  Outward appearances of the launcher appear very similar, if not identical to the legacy M2093 40mm system. 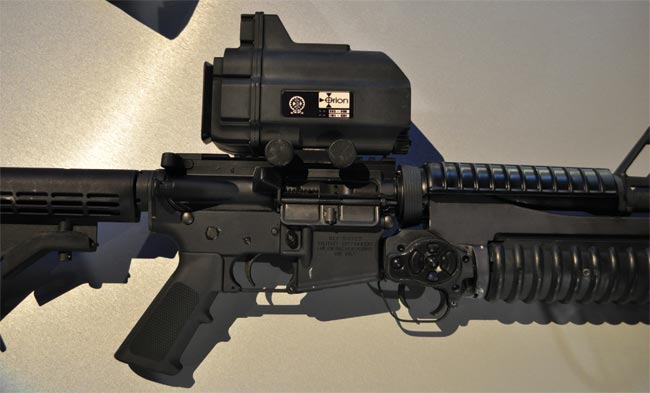