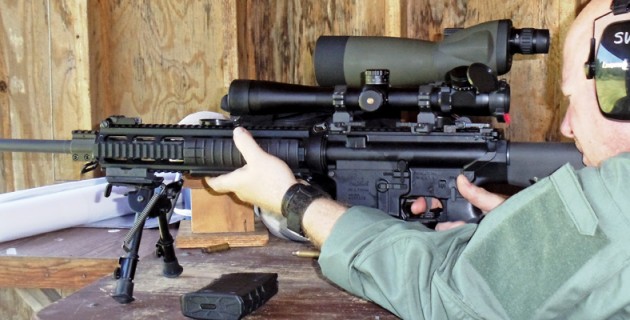 At the 2012 SHOT Show, ArmaLite introduced their new and long anticipated AR-10A family of rifles.  This is an AR-10 that uses the standard magazine rather than the proprietary M14 based magazine that the ArmaLite AR-10B rifles have used since their introduction in 1995.

To trace the history a little, the ArmaLite AR-10B series was introduced to the commercial market in 1995, which was one year after the infliction of the 1994 assault weapon ban that prohibited production of magazines that held more than 10 rounds for commercial purposes.  Former U.S. Army Ordnance officer and President of ArmaLite Mark Westrom had a dilemma on his hands while in development of his AR-10.  He could use the standard AR-10 magazine that was developed in the 1950s, which there were few available, and the new Knight’s Armament Company SR25 magazine, of which there were even fewer in production prior to the institution of the ban.  Another option was the FAL magazine.  The FAL magazine would not work due to a different bullet feed; the feed lips were in the receiver, thus the FAL magazine was not a good candidate.  However, there were tens of thousands of surplus M14 magazines out there.  Westrom wanted his customers to have a legal 20-round magazine and there was only one way to do it: convert his AR-10 magazine well to take the M14 magazine.  The magazine would need a major modification to work as well.  The follower would not actuate the AR-style bolt catch so a patented spring loaded plunger was added to the rear of the follower.  The catch was cut into the left side of the magazine.  The entire bolt catch option was made possible by the groove in the back of the magazine well.  That gave the space for the spring loaded plunger to activate when the last two rounds are in the magazine.  When the bolt carrier group moved to the rear after firing the last round the plunger lifts upward on the bolt catch locking the bolt to the rear.  Due to no stop-notch on the modified AR-10 magazine to prevent it from over-traveling the mag catch, Westrom added a stop rib in the upper receiver that prevents mag catch over-travel.  Westrom offered a magazine conversion service to his customers who would send in their M14 magazines and ArmaLite would convert them to work in their rifle and ship them back.  This worked out very well. In 2004, the “Assault Weapon Ban” sunset permitted new production of high capacity magazines.  In the intervening years other AR-10-type rifles came to market.  Over the last 5 years alone, many new rifles have come on deck including DPMS, Remington, LWRCI and SIG to name a few of the newly produced 7.62mm rifles similar to that of the AR10-type rifles that took the standard AR-10 magazine.  Then Magpul introduced their PMag L20 magazine that is an original AR-10/SR-25 magazine.  They took over the market with all of these companies.  To date most all of the AR-10-type rifles are shipped with this magazine.

The success of the ArmaLite AR-10B-series is undeniable.  However, there was a part of the market who liked the idea of multiple sources for magazines.  Some of them are diehard Magpul fans as well.  With all the additional companies now offering the AR-10-type design, ArmaLite may very well have lost customers to companies that had the non-proprietary standard magazine.  The modified M14 magazine is a very strong, durable and reliable magazine.  With the ban’s demise, ArmaLite went into production of their own magazine, making it even better than the converted M14 magazine.  There were no functional issues here.  The standard magazine is no more or less reliable than the M14.  In fact, the M14 magazine was steel compared to aluminum.  But the customers have spoken.

The new addition to the AR-10 lineup is the AR-10A. The difference is instead of using the M14 based magazine the new rifle uses the standard AR-10 magazine making it compatible with several other manufacturers’ magazines including original 1950s vintage AR-10 magazines, Magpul, Knight’s Armament Company SR25 magazines and C-Products magazine.

Westrom decided to offer an additional family of weapons to his lineup; the AR-10A to separate it from the AR-10B, which takes the modified M14 magazine.  This required a new magazine well and a modified upper receiver.  The upper receiver had to have the magazine stop notches removed.  With the redesign of the magazine well the rifle would accept the 1950s original magazines, KAC SR-25 magazines, C-Product magazines and perhaps more importantly the new Magpul PMag L20 magazine.

The rest of the rifle remains the same.  The only new parts would be the upper receiver itself, bolt catch and the magazine catch.  For this article a prototype rifle was provided.  It was based on the AR-10A4.  The rifle has a fixed GI stock, flat top upper receiver, ArmaLite full length quad rail system (non free floating) and a 20-inch barrel with A2-style compensator.  There were a few gadgets added to the rifle including an ambidextrous selector lever, KAC front and rear back up sights and a Norgon ambidextrous magazine catch.  On the original rifles, the Norgon ambi-catch did not work.  If you depressed in from the left you would have to pull the magazine out.  It was not compatible with the M14 magazine. However, now with the standard magazine it works perfectly.  There is only one exception; it will not work with the 1950s magazines.  The geometry of the catch is not compatible with the original magazines though it works perfectly with all others.  The optic chosen was a Leupold Mark 4 LR/T 3.5-10x40mm M3 with illuminated reticle mounted on an A.R.M.S., Inc. high throw lever mount. The original 1950s ‘waffle’ magazine (left) compared to the modified M14 magazine (right), which Westrom used in his AR-10 series introduced in 1995. The M14 magazine is durable and reliable but proprietary to ArmaLite rifles.

Fit and finish is what you would expect from ArmaLite.  Receivers were tight and flawless finish.  The rifle has the two stage match trigger in it and some Tangodown grip panels/rail protectors were added.  When at the range a Harris bipod was used mounted to an A.R.M.S., Inc. throw lever mount.  KAC magazines as well as C-Products and PMags were taken to the range to test for compatibility.

The ammunition for this test was provided by Silver State Armory (SSA).  SSA is known for manufacturing some of the highest quality duty and match ammunition in the industry at competitive pricing.  Silver State Armory just moved to a state-of-the-art facility in Packwood, WA where they have a 100 meter underground range and the facility meets United States Department of Defense requirements to manufacture military contract ammunition.  They manufacture their own brass.  All SSA ammunition is loaded with custom blends of powder geared towards the specific loading.  They offer several loadings in 5.56mm, 7.62mm NATO, 6.8SPC and .499 LWRC.  They are also one of the only ammunition manufacturers in the United States to manufacture armor piercing rifle ammunition in 5.56mm, 7.62mm NATO and 6.8SPC. There were 400 rounds of Silver State Armory 7.62x51mm 147gr FMJ ammunition fired from a variety of PMag L20, KAC, C-Products and original 1950s waffle magazines.  There were no misfires or malfunctions encountered during testing.  The rifle’s bolt carrier group was lubricated with G96 CLP before firing but the weapon would not be cleaned through the entire test.  Accuracy testing was conducted with Silver State Armory 168 and 175 grain OTM ammunition as well as Hornady Superformance 175 grain OTM ammunition.  There were an additional 200 rounds fired in combination of these match loads.  The rifle averaged between 1 to 1.75 inches at 100 yards.  By margin the best target was 1 inch and that was with the Silver State Armory 168 grain Sierra open tip match ammunition.  This is a very respectable group for a semiautomatic rifle.  Even the ball ammunition was shot sub 2 MOA.

It is this author’s prediction that the AR10-A will take over ArmaLite’s production in the future.  As the new model gains more visibility its popularity will explode.  The AR-10A will be offered in all models.  I would expect more models to be introduced at the SHOT Show in 2013.  The AR-10A is not replacing the existing AR-10B family.  It is an additional family of rifles to the ArmaLite line-up.  It would also be probable if another ban was to commence the original AR-10B family with the modified M14 magazines would resurface dominantly so customers would still be able to have 20-round magazines.  Although it appears clearly the M14 magazine is a stronger and more durable magazine than the original magazine, the standard magazine is more common and offered by several companies.  Keep in mind the original magazines were made out of aluminum and meant to be disposable – not to be used over and over again like the steel M14 magazines.  Whichever way you go, you will not go wrong with any ArmaLite AR-10 family of weapons. Close up of the markings on the AR-10A rifle. Notice the Norgon ambidextrous magazine catch installed by the author and the heavy texture on the bolt catch making it easy to actuate and grip.