Browse: Home   /   Are We Forever Stuck with the Bayonet? 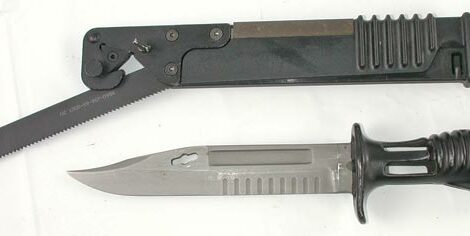 Are We Forever Stuck with the Bayonet?

George Kontis / 24 August, 2011 / Comments Off on Are We Forever Stuck with the Bayonet? / Author Name, Editorials, Search By Issue, V2N1, Volume 2

I sat quietly taking notes as the Purchase Description was being reviewed, making sure I would capture the important points.  The development of a new rifle for the U.S. Military is not an everyday occurrence and I wanted to make sure I understood all of the requirements clearly.  The Government speaker went quickly over the next point.  He knew that this one rarely enlisted any questions: “The rifle shall be compatible with the multi-purpose Bayonet and attach securely at the bayonet mounting points.”  No eyebrows were raised, no questions asked.  And why should there be?  It was a foregone conclusion that every service rifle would be configured to accept the standard bayonet.

What does this mean to a designer of weapons?  For one thing, whatever had been envisioned or planned for the muzzle area of the weapon was now complicated by design constraints.  Any muzzle device, no matter how effective in its current configuration, would now have a 0.86 diameter so that the bayonet ring could pass over and ride securely.  The fit would have to be loose enough for a quick deployment yet tight enough so there was no rattle.  At a prescribed position aft of the muzzle, the gas block or other appendage would need the special T-configuration for securing the bayonet.  This would require chamfered corners for a smooth and rapid connection.  The rifle would have to be rugged in the muzzle area as well.  When the M14 was in development, testing showed that thrusts with the bayonet resulted in damage to the weapon prompting a redesign.  There were but few words in the Purchase Description where the bayonet was mandated, yet in an instant, the freedom of design was greatly restricted. 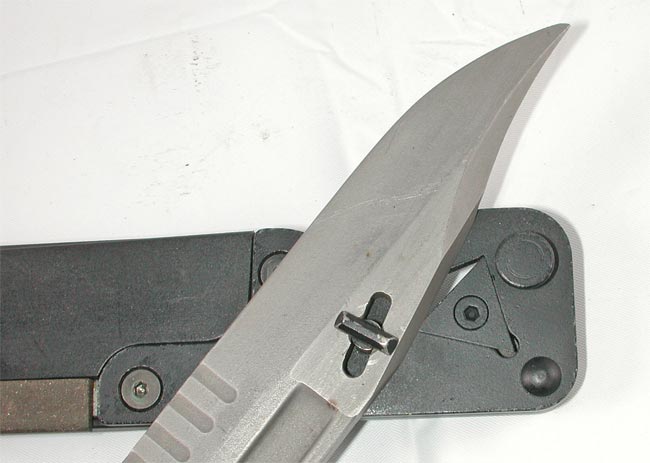 Why in the world do we need a bayonet anyway, I asked myself?  During the break I considered other devices that might be better suited to the end of the barrel.  How about a stun gun or a Taser?  Maybe a pyrotechnic wire cutter or a laser would be better; something, anything that was more “21st Century.”  Surely there must exist some new technology that might carry us beyond these design constraints from which we seem to be forever encumbered?  I needed to give this more thought and also made a mental note to check how we got to the point of a never-ending bayonet requirement.

Weeks later, while searching my files and other reference sources, I learned that the first bayonet use was recorded in the 17th century.  Riflemen wielding a matchlock rifle were protected by a soldier carrying a pike, whose job it was to keep the enemy at bay long enough for the rifleman to reload.  When they closed in on the enemy, the rifleman jammed a special “plug bayonet” in the end of the barrel so he could join the pikesmen in combat when there simply wasn’t time to reload.

Two other jobs taken on by the combat sheath are blade sharpening on the replaceable sharpening stone on the upper right surface, and cutting with the saw blade. It’s a good thing the stone is replaceable, while it is a good sharpener, the adhesive on many stones has not held up to service and needed replacing- which is easy to do with the proper hex wrench. The sawblade itself is also replaceable, and if used for minor tasks is quite handy. It is important to remember that this is not intended to replace a chainsaw, it is a convenience and if used too hard will quickly break. (Photo by Dan Shea courtesy LMO Working Reference Collection)

In the years that followed, bayonet designs were never very innovative but there was one that is remembered for out of the box thinking.  Early rifles needed a ramrod and later ones a cleaning rod, so one designer sold the U.S. on a ramrod bayonet combination design.  In 1905 this bayonet received some high level attention when president, Theodore Roosevelt wrote a letter to the Secretary of War telling him, “I must say that I think that ramrod bayonet is about as poor an invention as I ever saw.  As you observed, it broke short off as soon as hit with even moderate violence.  It would have no moral effect and mighty little physical effect.”  He questioned the need for a bayonet and went on to ask that further studies be undertaken by officers seeing combat in the Philippines and from military attachés who were sent as observers to the Russo-Japanese war.  Two American Colonels from the office of the Surgeon General were assigned to accompany the Russian Army in combat in order to study the wounds caused by weapons of modern warfare.  Observations on the use of the bayonet would be part of their mission.

The Russian and Japanese armies faced off on three different fronts in battle lines that extended 10 miles, 60 miles, and 80 miles.  Nocturnal engagements were frequent and much use of the bayonet was made on both sides, yet the actual number of casualties attributed to the bayonet was a mere 0.3%.  In their report, the Colonels concluded: “The experience of the Boer War and that of the present Russo-Japanese war has shown that the bayonet is not yet an obsolete weapon and that we still must reckon with it.” 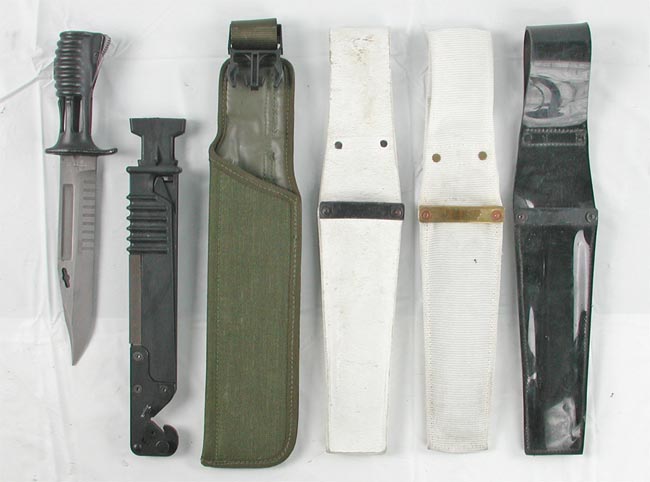 For the collectors out there: L-R: British SA80 Bayonet, Combat Sheath, Green nylon combat frog, L3A1 white buff leather parade sheath, White buff leather parade sheath with brass, Black patent leather sheath for Regiment Parade. SA80 bayonets have a somewhat brittle tip and many examples will be seen broken off from hard use. This is not a problem limited to SA80 bayonets, hard use will cause failure in many bayonet tips. (Photo by Dan Shea courtesy LMO Working Reference Collection)

Reckon with it we did, from the First and Second World Wars and the Korean War right up until the 1950s when the M14 rifle was being developed to replace the M1 rifle, Browning Automatic Rifle, M2 Carbine and M3 Grease Gun.  The bayonet used with the M1 rifle did not fit the M14, which got the Army thinking about the requirement for a bayonet.  Mr. Amos Bonkemeyer, who was then head of the Light Weapons Section of the Army’s Infantry and Aircraft weapons section, stated the Army “… is considering not using a bayonet with the M14.”  This came as a result of a recommendation from Fort Monroe where they reported, “The bayonet is rarely used in combat.”  These observations led to seriously consider arming the soldier and Marine with a K-bar knife with no means of attachment to the rifle.  This concept met resistance from the troops and eventually the bayonet was accommodated on the M14.  The front end of the weapon was redesigned and the stock reinforced to a point where the M14 was tested and determined to be as good as the M1 for bayonet fighting.  The M16 that followed met the same requirement.

Resigned to be forever burdened with a bayonet, the Army funded a project to make the bayonet more useful.  The soldier needed a saw, a wire cutter, or an all purpose knife far more frequently than those combat situations that required him to affix a bayonet to the end of his rifle.  In 1973 a project was funded to develop a multi-purpose Knife-Cutter Bayonet that would perform multiple tasks and also be effective as a fighting tool.  A contract was awarded, designs were conceived, and a number of prototypes were built for field trials.  Just as the multi-purpose M14 rifle that preceded it, the Knife-Cutter Bayonet proved once again that a product that makes design compromises in order to do multiple jobs ends up doing none of them very well.  Their overweight designs were not able to cut double strand barbed wire and were too cumbersome for most practical uses.  At the time these studies were undertaken, men had already been sent to the moon, yet these developers were overwhelmed by the challenge to develop a multi-functional bayonet, their final report stating: “Development was terminated when it was concluded that it was beyond the state of the art to develop a single item encompassing all the features stated as essential.” 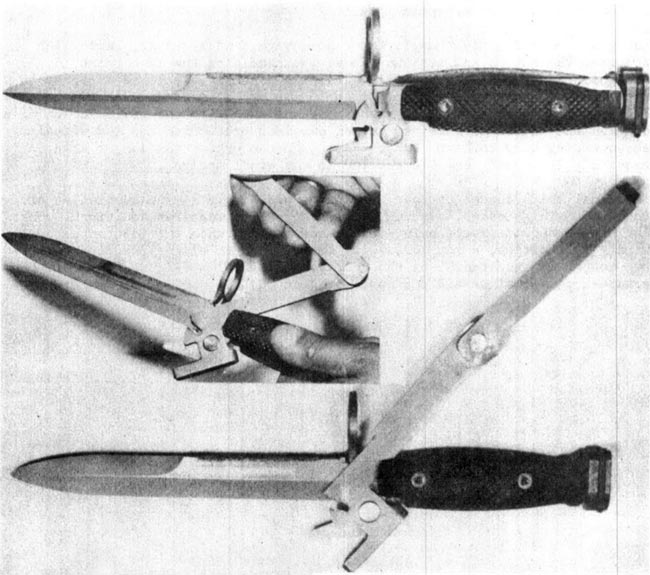 Only one year after the first “new rifle for the military” meeting, I found myself in a carbon copy of the first meeting.  It was another new requirement, this time for a carbine that would also require the accommodation of a bayonet at the muzzle.  When they reached the point in the purchase description that would cover the bayonet I thought once again about Teddy Roosevelt, the Russo-Japanese War, Stun guns, Tasers, and Lasers.  I turned to a combat veteran next to me and whispered, “Why are we doing this again?  Do you guys really need a bayonet?”  The answer was short and profound.  “George, when the soldier’s weapon no longer works for whatever reason, the bayonet is his last remaining means of defense.”  Gee, I never thought about it like that.  I don’t feel so bad though.  Teddy Roosevelt didn’t get it the first time either.

by George Kontis on 24 August, 2011.
Tags: 2010, George Kontis, V2N1, Volume 2
← Brugger+Thomet’s Police Days
History of the Heckler & Koch 40mm Grenade Launcher →
Distributed at trade shows worldwide, Small Arms Defense Journal is a bimonthly publication that focuses on small arms, accessories, gear for the soldier, new products, industry news, and defense trade shows. The first issue of SADJ was Spring 2009, which launched at the LAAD show in Rio de Janeiro, Brazil. SADJ (pronounced “sage”) is targeted toward military, law enforcement, and defense industry professionals. Our job is to reach these groups and tailor content to their interests while producing a publication that is applicable to an international audience.