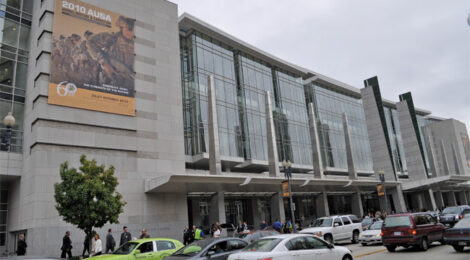 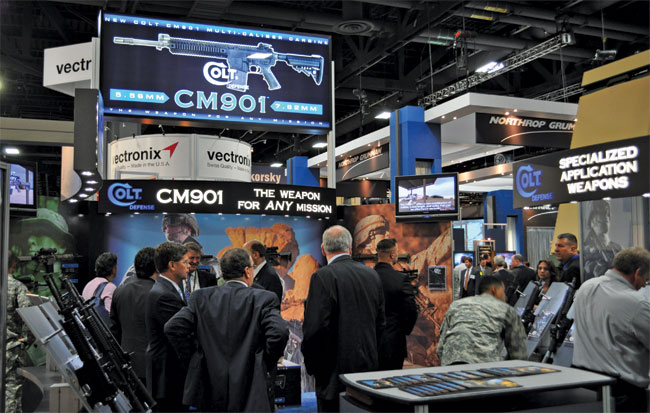 The Colt CM901 weapon system proved to be a popular destination for many attendees.

AUSA 2010 proved to be a great success, with attendance by exhibitors and show attendees exceeding prior records.  Held from 25-27 October 2010, the show attracted attendees from more than a dozen countries.  The AUSA trade show continues to be one of the premier military hardware trade shows within the United States, with displays of rotary aircraft, artillery, and solider systems.  Small Arms Defense Journal took note of several land warfare systems of note.

Colt
Colt revealed the CM901, a modular carbine that incorporates aspects and features of the M16/M4 and the AR10 into a single rifle system.  Expanding upon the ever popularity to the modular M16/M4 system where an upper receiver can be changed out for longer (or shorter) barrel, the CM901 takes modularity to a new level by also making the lower receiver modular.

By switching out the magazine well section of the lower receiver, the weapon system is able to be converted from 5.56mm to nearly any other caliber, including 7.62×51, 6.8 SPC, or 6.5 Grendel.  In addition, the lower is reportedly backwards compatible to all other existing 5.56 upper receivers, allowing the user to maintain existing inventories of 5.56 upper receivers. 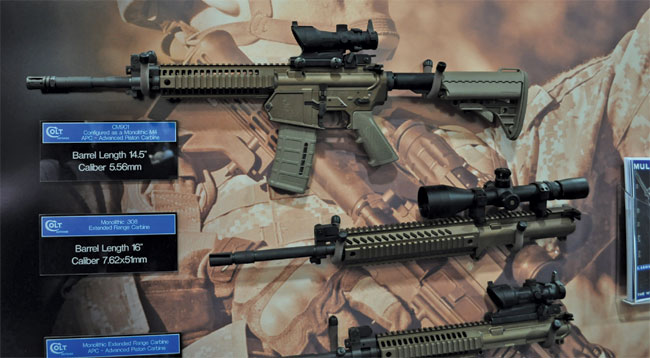 Colt CM901 weapons system. Capable of being configured as a 5.56, 7.62x51, or 6.8 SPC rifle, the system allows increased modularity to an already crowded field of options to the existing M4, SR25, and AR10 systems.

The modularity aspects of the system are staggering.  Considering that the recoil system – whether gas piston or direct impingement – is within the upper receiver, the new CM901 can be configured into any platform the user desires.  More importantly, the system offers full ambidextrous controls, with a selector switch, bolt release, and magazine release controls on both sides of the lower receiver.

Fabrique Nationale
FN revealed the FCU-850N, a fire control unit designed for the FN Mk13 40mm enhanced grenade launcher.  Incorporating both a laser range finder and fire control unit, the FCU-850N provides greater first round hit probability by first measuring the distance between the shooter and target, then providing an aiming solution via electronic reticle.  Interestingly enough, the unit also incorporates a clinometer that measures the angle of launch.  While the FN representatives were unable to provide additional detail, presumably, the firing solution changes as the weapon’s vertical angle of fire is adjusted and changed.  The system reportedly is capable of recording the ballistic solutions for more than 50 different types of 40mm rounds.

When used alone, the laser range finder is capable of assisting shooters with range confirmation, while also being utilized as visible or IR laser pointer.  The unit is compatible with any 40mm grenade launcher system that features a top (12 o’clock) Mil-Std 1913 Picatinny rail. 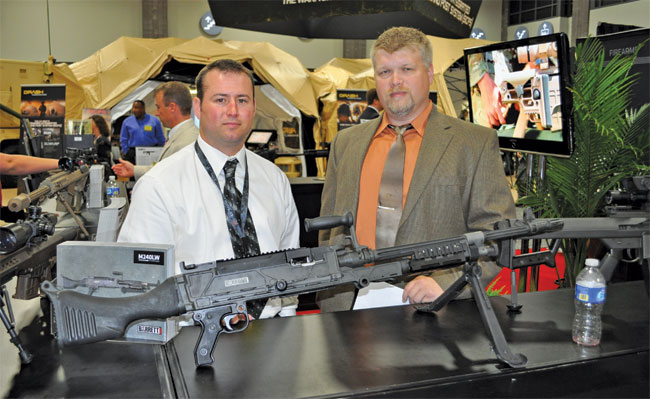 Lockheed Martin
Lockheed Martin unveiled the HULC, a hydraulically powered exo-skeleton capable of assisting soldiers carry loads exceeding 200 pounds for extended periods, over all types of terrain.  Weighing 53 pounds without batteries, the system utilizes a low flow, high pressure hydraulic system to assist the soldier.  Powered by lithium polymer batteries and standard hydraulic fluid, the system is reportedly capable of running for upwards of 72 hours.  In standard mode, the system has a range of 12.5 miles, at a speed of .66 miles per hour.  Maximum sustained speeds of 7 miles per hour, and a burst speed of 10 miles per hour are reported.  As battery power falls, the system reportedly continues to support the loads, without restricting mobility.

Barrett
Long known for its .50 caliber rifles, Barrett showcased its lightweight M240 GPMG.  All major components, (including the trigger group, bolt assembly and barrel) are compatible with the new Barrett system.  Major weight savings appear to be achieved via redesign of the weapon’s receiver and forend/heat shield.

Barrett also displayed the M107A1, the latest variant in the M82/M107 series.  Weighing 4 pounds less than the M107, the M107A1 is designed to be used with a sound suppressor.  Utilizing a four-point titanium muzzle brake, the rifle/suppressor combination features a quick attach feature. 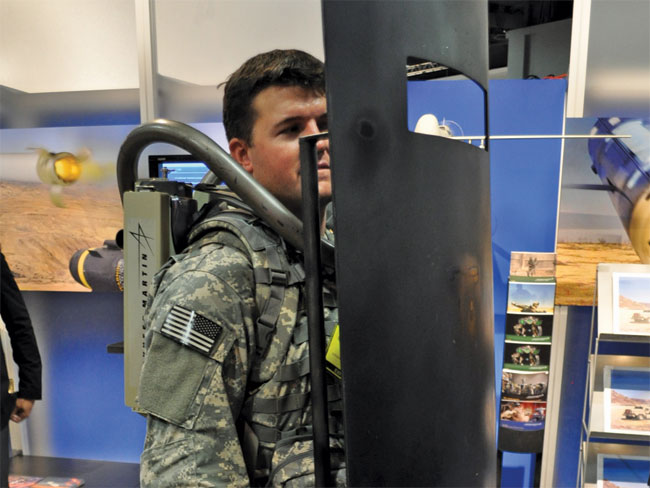 The Lockheed Martin HULC allows soldiers to mount heavy objects to the front or rear of the exoskeleton.

The lightweight aluminum upper receiver features an integrated, rigid 27 MOA optics rail.  Inside the upper receiver, the bolt carrier rides on a hardened steel, anti-wear strip for added durability.  A thermal-guard cheek piece protects the user’s face from extreme heat or cold.  A titanium barrel key and fully chrome-lined bore and chamber add to the rifle’s durability.  Finally, the M107A1 rifle’s lower receiver includes a new aluminum recoil buffer system that’s optimized for use with a suppressor.  The bolt carrier’s components are protected with a mix of ultra-hard PVD coatings and advanced nickel Teflon plating that increases lubricity, is corrosion-resistant and greatly eases cleaning.

The AUSA show is a great opportunity to witness developments in the small arms industry, talk to the engineers involved in the R&D process, and discuss innovations with others within the small arms community.   The 2011 meeting will be held in Washington, DC, from 10–12 October, 2011.