The jewel of their aircraft collection is this flying Handley Page Halifax II (III) “Friday the 13th” that is operated and maintained at the Yorkshire Air Museum.

In the beautiful countryside of northern England just a few miles from York, is the Yorkshire Air Museum.  Based on the former World War II Bomber Command Station of RAF Elvington, the Museum retains the authentic atmosphere of the period, with many fascinating exhibits housed in restored wartime buildings.

The Museum is a memorial to all the Allied aircrews of Bomber Command, including French, Canadian, Australian and other nationalities that served in the Elvington area.

The unique aspect of this Museum is that the entire facility is the Museum with 17 preserved buildings of a World War II base that operated bombing runs across the channel to the heart of Germany.  Each of the buildings contain exhibits pertaining to the people and operations that was home at Elvington.  Originally the home of 77 Squadron of Number 4 Bomber Group, the first operational aircraft were Handley Page Halifax four-engine bombers and took part in the Battle of the Ruhr and many other battles aimed at the destruction of German industry.

Turrets used by Air Gunners and Wireless Operator/Air Gunners in the RAF Bomber Command line one wall of the Air Gunners Memorial in Building 3 at the Yorkshire Air Museum.

During 1943, 77 Squadron alone suffered heavy losses, particularly against heavily defended Berlin.  By the end of the hostilities, the squadron had lost almost eighty Halifaxes, with over five hundred aircrew killed, missing or taken prisoner.  (The normal squadron strength was approximately twenty aircraft.)  In all, more than one hundred Halifaxes left on missions from Elvington during World War II, never to return.  Almost 900 air and ground crew members were killed or missing due to enemy action or accidents.

In 1944, 77 Squadron moved to another station and in May 1944, Elvington became host to the only base to be operated entirely by French personnel with the arrival of No. 346 (Guyennne) and No. 347 (Tunisie) Squadrons operating within No. 4 Group.

In October 1945, the French Squadrons left and in 1952 RAF Elvington was part of an expansion program with the US Strategic Air Command that included a new control tower and lengthening the main runway to accept the latest jet aircraft.  The base never became operational and was vacated in 1958 and in March 1992, RAF Elvington was closed.  The original air traffic control tower and adjacent buildings were derelict and overgrown.  The land and buildings were privately purchased and a band of devoted volunteers set to work to clear 40 years of undergrowth and to restore and upgrade the buildings to the way they were in 1944.  The Museum is privately financed and supported with no government, state or local authority funding.

Lewis Mk III Light Machine Gun. Introduced in 1918, it was the improved version of the standard infantry gun with a lightened and faster firing mechanism. This gun proved to be a useful stopgap until the introduction of the Vickers Gas Operated “K” gun and Browning machine guns in the mid 1930s.

Air Gunners Memorial
A truly unique aspect of the Yorkshire Air Museum is in building number 3.  This building is devoted to air gunners from the early World War I rear open cockpit planes that were armed with a Lewis gun with a 97-round drum magazine mounted on a Scarf Ring mount through the powered turret gunners of World War II.

The Air Gunners’ Collection is believed to be the only one of its type in the world and is dedicated to the memory of the tens of thousands of Air Gunners who lost their lives in World War II. 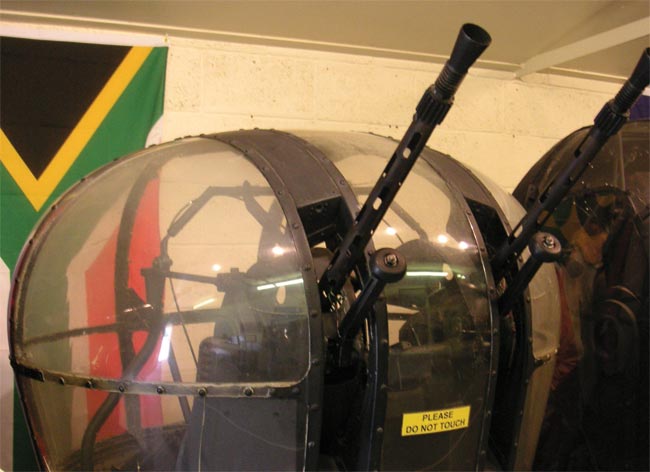 Nash and Thompson FN 150 Turret. Used on the Lancaster in the mid-upper position, it was operated by hydraulics. It was armed with two .303 cal. Browning Mk IIs and carried four 500-round boxes of ammunition within the turret. The gunsight used was the Mk IIIA or Mk IIIN reflector sight. The wood-capped arms extending beneath each gun are depression restrictors.

The Air Gunner’s tasks were complicated and hazardous and his life expectancy was appallingly short.  It could be as little as two weeks before a rear gunner on bomber operations could be expected to be shot down or killed.

The display at the Yorkshire Air Museum shows an array of weapons, turrets and air gunnery techniques used by these aircrew who played such an important part in the achievements of the RAF effort.

In the years prior to World War II, the Air Ministry wanted a more purpose designed gun and the Vickers Gas Operated “K” gun using a 100-round drum magazine was adopted and became standard issue for air gunners in the early years of the war.

With the introduction of enclosed turrets that were being developed by Boulton Paul, Frazer Nash and Bristol Aircraft, powered by hydraulic or electrical power supplied by the engines that enabled them to be rotated, the first of these power-operated turrets were fitted with a single .303 Lewis gun and installed in Boulton Paul Overstrand medium bombers and used between 1935 and 1938 by 101 Squadron. 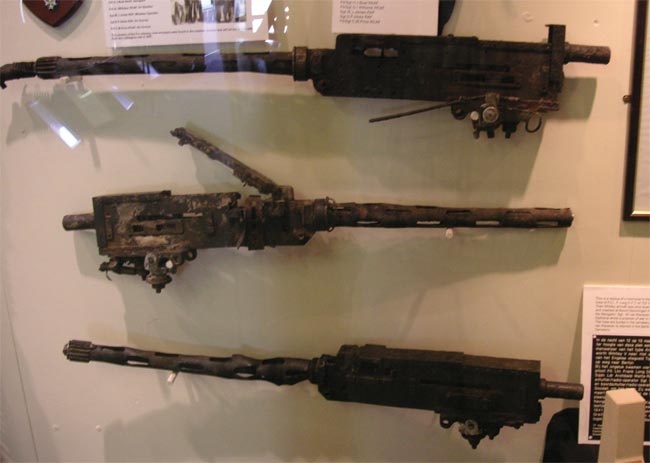 Recovered from crash sites, these Brownings show the affects of their destiny. The fatality rate of Air Gunners and Wireless Operator/Air Gunners was extremely high.

As World War II began in 1939, mid-upper turrets were fitted to aircraft such as the Boulton Paul Defiant, Bristol Blenheim and Avro Anson.  Not long after, the twin-engined Whitley, Wellington and Hamdens were not only fitted with mid-upper turrets, but a rear turret and often a nose turret.  They were fitted with Browning Mk II machine guns in .303 caliber and installed in either banks of two or four guns.  The number of air gunner stations on aircraft increased as the fleet of four-engined bombers increased in 1942, initially again with the .303 caliber Mk II Brownings.  However, the .303 Mk II Browning’s weakness was its lack of range and German fighters, usually equipped with cannon, could easily outrange the Browning air gunners who had to wait until the enemy plane was within 400 yards before returning fire – a deadly time indeed as they would have been under fire from the German guns for several seconds before being able to respond.  Later in the war they were replaced with the much more effective .50 caliber Brownings.

The job of the air gunner required a highly trained and skilled individual.  Not only was he to defend his aircraft from enemy fighter attack but it required excellent night vision (as Bomber Command conducted bombing raids at night) and he had to be proficient with bullet trail, drift, range finding and harmonization in order to maximize fire power as well as be proficient in correcting stoppages (particularly while manning the turret and under fire) and understand fully how the turret functioned. 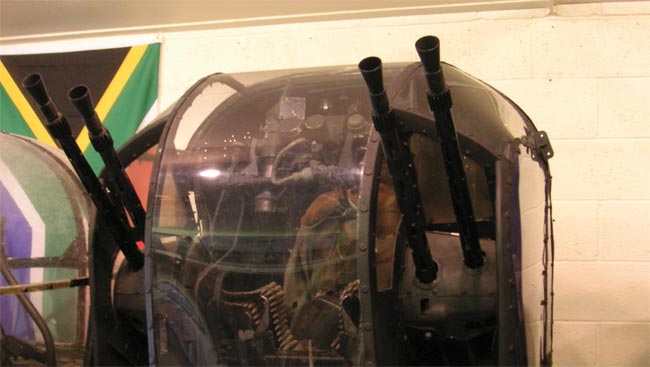 Nash and Thompson FN 121 Turret. Used on the Lancaster in the tail position, it was operated by hydraulics. Armed with four .303 cal. Browning Mk IIs, it carried a total of 10,000 rounds of ammunition with four 1,900 rounds carried in boxes in the fuselage and servo-fed to the guns.

Air Gunners (AG) and Wireless Operator/Air Gunners (WOP/AG) made up approximately half of the crew of an aircraft.  Bomber Command estimates that 125,000 aircrew served in the squadrons and the operational training and conversion units and approximately 73,000 were casualties of which 55,500 were fatalities.  The losses of AGs and WOP/AGs within this group would be 20-25,000.  It is also important to note that the RAF crew losses noted above apply only to Bomber Command in the European theater and do not include losses of Coastal Command, Transport Command, 2nd TAF, SEAC and the Mediterranean.  Thus, the loss figures would be substantially higher.  This Air Gunners Memorial in Building 3 pays homage to those intrepid gunners, the risks they took and the losses they incurred.

This World War II airfield with all its restored buildings and displays is a unique experience and well worth a visit should you be traveling in Northern England or visiting the Royal Armouries in nearby Leeds.  Also located on the grounds is a beautifully maintained Memorial Garden in memory of all the aircrew of the many nationalities that flew out of Elvington.  There is a small restaurant on premises as well as a gift shop.  Admission is £5 for adults, £4 for seniors and £3 for children (5-15).  Parking is free.  They are open every day from 10 a.m. to 5 p.m. (in winter, 10 a.m. to 3:30 p.m.) and closed on Christmas Day and Boxing Day (the day after Christmas).  Directions to find the Yorkshire Air Museum are to take the York by-pass, take the Hull exit (A1079) and then an immediate right to Elvington (B1228).  The Museum is sign-posted on the right. 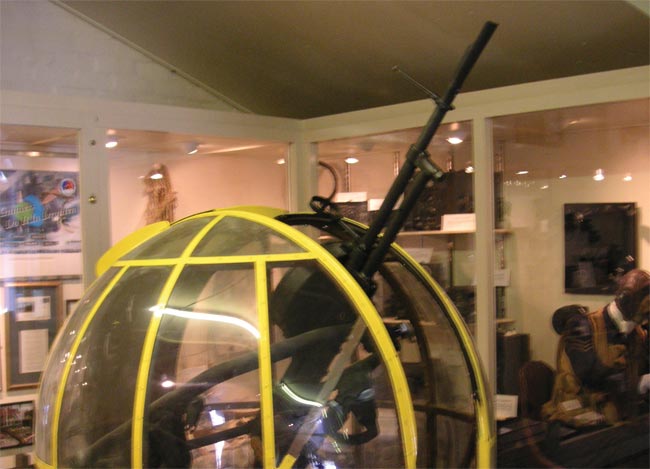 
by Robert G. Segel on 25 August, 2011.
Tags: 2010, Museum, Robert G. Segel, V2N2, Volume 2
← Defense & Security 2009
SHOT Show 2010 →
Distributed at trade shows worldwide, Small Arms Defense Journal is a bimonthly publication that focuses on small arms, accessories, gear for the soldier, new products, industry news, and defense trade shows. The first issue of SADJ was Spring 2009, which launched at the LAAD show in Rio de Janeiro, Brazil. SADJ (pronounced “sage”) is targeted toward military, law enforcement, and defense industry professionals. Our job is to reach these groups and tailor content to their interests while producing a publication that is applicable to an international audience.