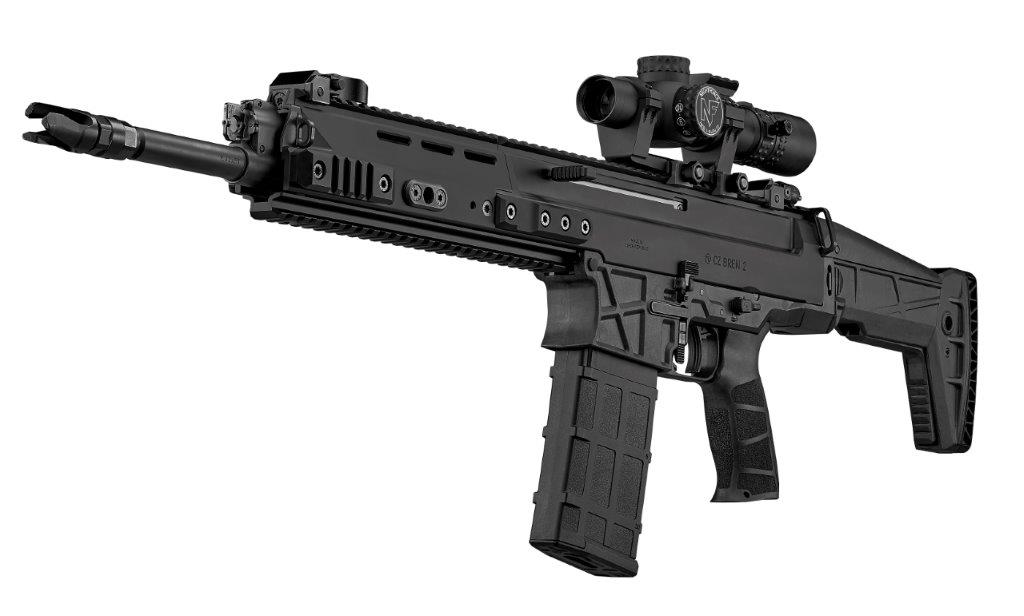 Between September 10 and 12, 2018, Česká zbrojovka Uherský Brod held the third Meeting of Professional Journalists. The event, which welcomed about 60 journalists, bloggers, vloggers and many other professionals, took place at the Testing Shooting Range in Bzenec. Here, several new firearms made their world debut, including the CZ BREN 2 BR assault rifle in 7.62x51mm NATO caliber.

It must be noted that this powerful caliber had been planned for the CZ BREN weapon system as early as January 2006, during the idea phase of the project. However, CZ first concentrated on the development of a model in 5.56x45mm NATO caliber. This caliber was requested by the Czech Army and subsequently became the typical choice for the CZ 805 BREN A1/A2 models. Further calibers were being added gradually, hand in hand with the improvements of the design, which is now truly multi-caliber. Thus, the CZ 807 model came into existence, primarily intended for the 5.56x45mm NATO and 7.62x39mm calibers, though CZ rifles in 7.62x51mm NATO were also included in a tender for Pakistan.

Despite the fact that the 807 model enjoyed reasonable commercial success, in the end it played the role of a quality “in-between” product. In fact, during that time, the development of the brand new CZ BREN 2 model series was finalized, with serial production beginning in 2016.

The September presentation of CZ rifles in Bzenec showed that in this case, a version in 7.62x51mm NATO caliber has also made an appearance. For now, it bears the name “Battle Rifle,” which is a term that professionals use to make it clearer which small arms have been developed after the Second World War. A “battle rifle” is defined as a semi-automatic or automatic military rifle equipped with a detachable magazine, using the 7.62x51mm NATO caliber (or .308 Win, the slightly different civilian alternative).

The traditional models of this category, the FN FAL, M14 and HK G3, are now being joined by their modern successors. After years of being overlooked, the tried and tested 7.62x51mm NATO caliber is enjoying a comeback. That is because in the asymmetric warfare of the Global War on Terrorism, the need for significantly greater effective range at small unit level has now arisen.

At first glance, the CZ BREN 2 BR gives an impression of a slightly larger assault rifle. Such an impression is basically right, as the Senior Product Manager for military weapons from Česká zbrojovka a.s., Ing. David Kreisl, explains. The design has been based as much as possible on the 5.56x45mm NATO/7.62×39 models. The technical design, all the controls, the method of stripping, assembly and cleaning were retained. Some minor parts are interchangeable; the telescopic folding stock is identical. Otherwise, everything else has been enlarged and strengthened so that the firearm is reliable with the considerably larger and more powerful cartridges. This has led to the only significant difference in the design: to provide reliable extraction of the cartridge cases, the CZ BREN 2 Battle Rifle is equipped with two ejectors.

Another feature worth noting is the STANAG magazine. The company has not only designed it but also manufacturers it from subcontracted parts; the capacity of 25 rounds constitutes one of the largest on the market. After some rather unsatisfactory experience with transparent plastic, which wasn’t oil-friendly, CZ now uses a more durable black polymer. To allow the user to keep track of the number of cartridges remaining, there are openings in the back wall through which the light color of the magazine spring is visible even in low light. The general practice today is to favor steady tactical reloading; however, if the user wants to see how many cartridges there are left, all he needs to do is to tilt the firearm slightly to the side.

Another innovation, although not directly connected to the caliber but to the growing tendency of CZ to modernize their weapons hand-in-hand with the wishes and requirements of customers, is a split receiver and an independent forend. This feature allows far greater variability, whether with regard to barrel lengths or accessory rails. In Bzenec, the company presented the CZ BREN 2 BR rifle with one long MIL-STD-1913 rail on the upper receiver where it is integrated with the receiver itself and the forend and another one on the lower receiver, attached on the bottom, spanning from the end of the forend to the trigger mechanism housing. There are no rails on the sides. The company deliberated whether to opt for one of the more and more popular LOK systems, but in the end decided on a set of standardized threads which, in line with current trends, allow armed forces to have the rails and accessories made to their exact requirements. Any reasonably equipped manufacturer should be able to do that.

At the Shooting Range

In Bzenec, we were able to try out the CZ BREN 2 BR on a 300 meter range. We were shooting with .308 Win S&B Match ammunition, the rifle was fitted with a combination of an EOTech collimator sight and a triple magnifier, as well as a bipod. In the target area, there were popper targets in a size roughly resembling a human torso, with several even smaller ones for a more challenging aim.

Experienced shooters had no trouble to hit every time from a supported prone position. Those with sharp eyesight had a bit of an advantage, as some grappled with the relatively low magnification. It was necessary to keep in mind the correct triggering technique, since 300m is quite a distance and any small errors are noticed. Nonetheless, the accuracy potential of the rifle seemed fine; any misses were solely attributed to the user.

The shooting itself (for safety and practical purposes only single round fire was allowed) was comfortable, even for those who tried shooting in the standing position. The recoil was easily manageable, without a doubt helped by the fact that, apart from the inline style of the stock and its thick buttplate, it was an automatic weapon. Also, it paid to keep the muzzle above the shooting mat. Although the mat moved a lot after each discharge, we avoided swirling the sand that was all around. Still, we didn’t notice any problems with function in the somewhat desert conditions. However, to assess the properties of the CZ BREN 2 BR in more detail, more rigorous testing is necessary, preferably carried out by a target group customer.

The Journey to DMR

Even though the stated caliber and the results may lead to this conclusion, the CZ BREN 2 BR is not categorized as a “Designated Marksman Rifle.” It is a basic individual weapon with the effective range considerably greater than that of assault rifles in 5.56x45mm NATO or 7.62x39mm calibers. The advantage of the CZ battle rifle is the fundamental design unification with the CZ BREN 2 assault rifles. Hence the controls and maintenance are the same, which should significantly simplify training. In addition, it has retained the option of short burst fire, which may be suitable when, for example, engaging in suppressive fire.

By being introduced to the professional community in September, the CZ BREN 2 BR enjoyed its public premiere. Even so, armed forces from several countries have already been testing the BR model for some time, reportedly with good results. Other armies are waiting to see what will follow. With the completion of a quality assault rifle in 7.62x51mm NATO caliber, CZ has created a wide window of opportunity to further expand their portfolio—a DMR version included. It is said that the Uherský Brod company may have taken some steps in that direction already.