The world of 40mm Grenade Machine Guns is seeing consistent product growth.  The principle weapons used throughout NATO are the well known MK19 and the H&K GMG 40mm.  US SOCOM has fielded the MK47 Grenade Machine Guns.  NATO militaries are looking at integrating improvements rapidly to give them an edge in operations in Afghanistan.

Mounts and Accessories
Vinghog (Norway) has confirmed that their 40mm AGL fire control, marketed as the Vingmate FCS, is now available for sale.  Norwegian national forces have equipped their H&K systems with the new advanced fire-control system.  The Vingmate FCS boasts the ability to make “indirect fire” and the Vingmate FCS provides an open architecture to allow users to field the new “programmable air-burst ammunition”.  Vinghog also provides the light weight MK108 Tripod on the GDATP MK47 systems and states they have tested their lightweight tripod with the MK19 and H&K systems.  Further, Vinghog has developed soft-mounts for all AGL systems.  Vinghog has licensed H&K to produce their soft-mount for use with the H&K GMG 40mm AGL system.  Vinghog provides mounts to Kongsberg who incorporated these designs into all of their Remote Weapon Stations. 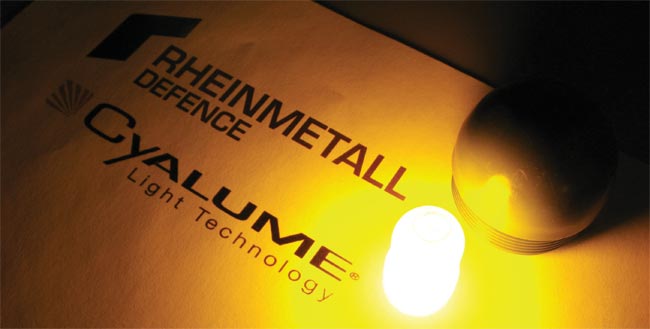 AGL UXO Training Challenges
US forces have had the most experience using 40mm AGLs as the USMC initially fielded the MK19 system in the mid 1980s.  The US Department of Defense Science Board Report on Unexploded Ordnance in 2003 estimated that the US DoD must spend USD $1,600-$16,000 per dud in UXO remediation.  40mm fuzed ammunition like the training M918 cartridge normally has a dud rate of 5%.  This means that militaries that buy pyrotechnic “flash bang” training ammunition must pay a substantial clean up bill.  The US Army buys the M918 flash bang cartridge for about USD $30 per cartridge and the US Army then spends USD $75-$200 per M019 cartridge cleaning up the UXO mess.  Flash Bang duds also contain percolates, which leach into the ground water.  Over the last 20 years, the US Army’s Milan Army Ammunition Plant produced millions of M918 cartridges.  Today, it is reported that the groundwater near Milan Army Ammunition Plant has high levels of percolates.

Solution to UXO Training Problem
In 1999, Rheinmetall and General Dynamics both received contracts from Picatinny Arsenal to evaluate use of “green” non-dud producing 40mm cartridges for use by the US Department of Defense.  The Rheinmetall cartridge was selected as the MK281 Mod 0, as it had superior marking capability.  Since the Army sponsored tests, the USMC has supported further development of the cartridge incorporating Cyalume Technologies light stick technology into the MK281 Mod 1 (BA21) cartridge.  The cartridge is now produced at Rheinmetall facilities in Germany and the United States.  The MK281 Mod 1 cartridge saves the DoD by reducing outlay of funds required to remediate 40mm UXO.

Gunnery Trainers
Each box of 40mm AGL training cartridges cost about $1,000 so the cost to train soldiers to use AGL systems quickly escalates.  In February 2009, Vinghog’s new gunnery trainer underwent operational testing by SOCOM users.  The gunnery trainer product is now slated for a production “go ahead.”  This product provides users with realistic scenario driven training that supplements live fire training, without the expense of live fire.

by SADJ staff on 16 August, 2011.
Tags: 2009, V1N3, Volume 1
← Industry News: Volume 1, Number 3
Nivisys UTAM-32 Thermal Imager →
Distributed at trade shows worldwide, Small Arms Defense Journal is a bimonthly publication that focuses on small arms, accessories, gear for the soldier, new products, industry news, and defense trade shows. The first issue of SADJ was Spring 2009, which launched at the LAAD show in Rio de Janeiro, Brazil. SADJ (pronounced “sage”) is targeted toward military, law enforcement, and defense industry professionals. Our job is to reach these groups and tailor content to their interests while producing a publication that is applicable to an international audience.