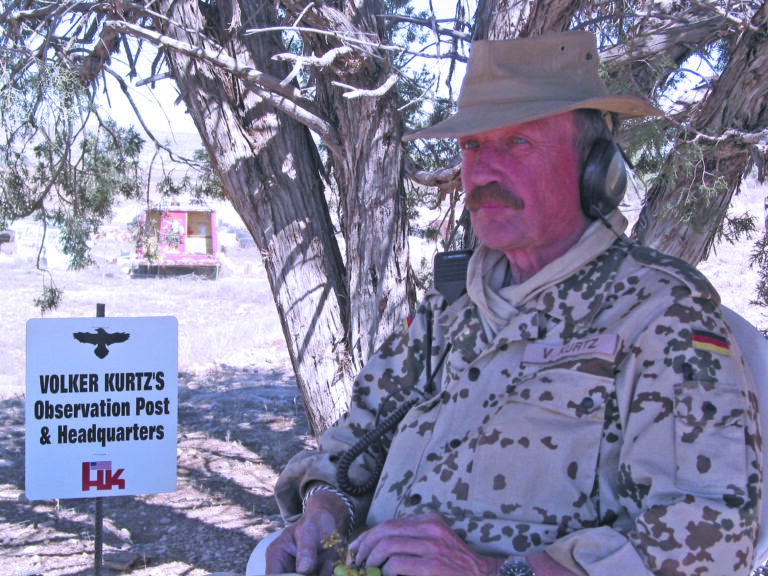 At the 22nd annual Small Arms and Cannons Symposium held in August 2008 at the Defense Academy of the United Kingdom, commonly referred to simply as “Shrivenham” for the small town in England where the event is held, Volker Kurtz, formerly with Heckler & Koch GmbH for nearly two decades, received the coveted NDIA Professional Service Award for his dedication to the small arms end user, to advancing the state-of-the-science of small arms systems, and to the industry as a whole.  Less than two NDIA Professional Service Awards are presented annually to deserving members of the international small arms community for exceptional career achievements in small arms and ammunition development and fielding.

A former German Army Infantry Officer prior to 1987, Major Kurtz was recognized for his instrumental work as the International Program Manager for Heckler & Koch in the concept, development, testing, and contractor program management and fielding of various US and foreign-friendly small arms, ammunition, weapon subcomponents and complex integrated weapon and fire control systems, both incremental COTS and new R&D program starts that occurred “under his watch” while at H&K from 1990 to 2007.

Volker Kurtz was the Contractor Test Director for the leading candidate during the US Army Advanced Combat Rifle (ACR) Field Experiment during the early 1990s.  While not fielded, the HK G11 ACR candidate completed the 18 months of rigorous technical and user testing with no system failures and was considered field ready; a first for a caseless ammunition firing assault rifle.  At the conclusion of the US ACR Program, Volker Kurtz performed duties as Contractor Program Manager for the bid proposal, development, testing and eventual fielding with US SOF forces of the USSOCOM MK23 MOD 0 Offensive Handgun Weapon System; the most reliable and accurate .45 caliber handgun in the world and the first .45 handgun fielded in the US since the venerable US M1911 handgun was adopted nearly one century ago.  During the 1990s, Volker Kurtz was the Subcontractor Program Manager for the winning bid proposal, development, testing and component integration of a team of subcontractors for the US Army Objective Individual Combat Weapon (OICW) which lead to the further development of the evolutionary XM29, XM8 and XM25 weapon systems.  For his part in this successful program, Volker was recognized with the “Silver Award for Excellence and Innovation” by then parent company BAE Systems.

Volker Kurtz was also instrumental in the development and testing, and eventual fielding, of various COTS small arms and accessories to include the HK416 Enhanced 5.56mm Carbine, SA80 High Reliability Magazine, 40x46mm Grenade Machine Gun (GMG), MP5/10 submachine gun, G36 rifle, MP7A1 PDW, and various other material items currently deployed with numerous US and foreign-friendly military, special operations and law enforcement organizations, to include more than 55,000 USP/P2000 handguns currently in service with the US Department of Homeland Security and TSA.

Throughout his time in the small arms industry, Volker Kurtz performed all manner of duties to insure successful mission completion regardless of the obstacles.  This included long periods of time away from home during on site support for the US ACR, MK23, OICW, XM8 programs, countless program meetings and test events as well as customer visits for briefings, new product development and customer service calls.  Volker Kurtz always provided a “return to reality” in R&D programs veering off course and is famous for reminding program participants of the limits of the laws of physics as they apply to small arms with famous sayings like, “That is when Isaac Newton drops the apple on your head,” reminding us all that not always everything dreamed is obtainable due to the limits of current and emerging technology and materials.  Volker Kurtz has always been highly respected for his strong work ethic and ability to manage complex programs and tasks.  Volker was always willing and available to go the extra mile, to lead from the front in any and all taskings regardless of difficulty or duration.

Volker Kurtz has helped in many ways to advance the current state-of-the-art in small arms and ammunition for the American war fighter and law enforcement community.  For that success and dedication, he is wholly deserving of the recognition provided by the NDIA Professional Service Award.  Upon accepting this award Volker acknowledged the importance of focusing on the real needs of the end user and the contributions of not one man but that of the team.