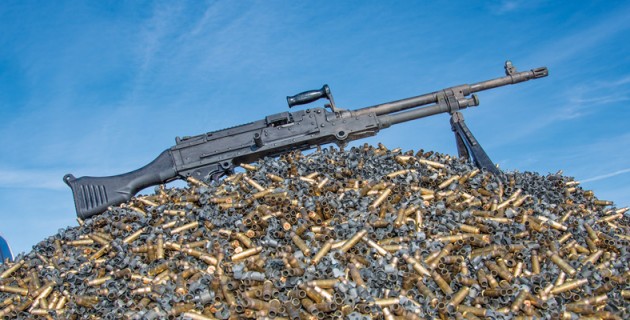 SADJ has known and covered the products from U.S. Ordnance in Reno, Nevada for many years. Their U.S. MK43 Mod 1 (M60E4) machine gun is state-of-the-art, and the M2HB .50 caliber machine gun from their shops is known around the world for its quality. Over the last few years, U.S. Ordnance founder Curtis Debord, Sr., Chief Operations Officer Daniel Fassler, and Sales & Marketing Vice President Steve Helzer have been traveling into more and more countries with their products, and, after many customer requests, decided to take on manufacturing the famous MAG-58 with U.S. M240 features incorporated. SADJ was asked to cover a full military specification style testing regimen that U.S. Ordnance had arranged with GSA Armorer training contractor Long Mountain Outfitters, LLC. It was a cold first week of January 2013 when LMO’s Chief Armorer Instructor Matt Babb showed up with his woolies and stepped into the factory for one of the most interesting tests we’ve seen in years…

History/Testing Parameters
The famous MAG-58 General Purpose Machine Gun has its roots in John Browning’s 1918 Browning Automatic Rifle: the BAR. FN Herstal’s relationship with Browning is well-known and it’s no surprise that the excellent BAR operating system would evolve in their hands. The FN Model D BAR added features such as a quick-change barrel, but the core operating system was alive and well throughout the evolution. Put simply, it works. By the mid-1950s, FN’s engineers had created a belt-fed weapon that essentially uses a modified upside-down BAR bolt, operating rod and locking systems.  It is of course more complex than that, but what they created worked smoothly and reliably. The first country to adopt the new weapon, called a “MAG-58,” was Sweden, which built and fielded it as the KSP-58 in 6.5 Swedish caliber. FN marketed this weapon around the world and soon had many other customers in the new 7.62x51mm NATO caliber using a metallic non-disintegrating belt. It was such a success that it became a mainstay in many armies; from vehicle mount to tripod mount to being carried on patrol.

With the success of the MAG-58 came recognition throughout the small arms end user community. When the U.S. M73/M219 7.62x51mm machine gun failed at its job, the U.S. began looking for a replacement machine gun for fixed/tank gun use and the MAG58 won out in its fixed role as the U.S. M240/C machine gun (the “C” model is right hand fed). FN Herstal opened a plant in Columbia, South Carolina to build the M240 and won numerous other contracts for U.S. small arms. Small arms engineer George Kontis from FN Manufacturing was on a program to show the M240, and he believed the U.S. military might want to replace the U.S. M60 GPMG with an M240 variant, so he developed an “Egress” or “Dismount” kit with pistol grip, buttstock, and bipod, and showed it to the U.S. Marines. His M240 out-performed the new 1980s original version of the M60E4 that Saco Defense was offering (at that point the E4 had not been through U.S. Ordnance’s thorough and effective Product Improvement Program), and the U.S.MC adopted it as the “M240G” or the “Golf.” Not long after that, the U.S. Army added some heat shields and adopted the “M240B” or the “Bravo.” Obviously, it’s much more complex than this, but that is the general story of how the MAG-58 became the current U.S. M240 series machine gun.

The U.S. Government has been working for some time to develop dual or more diverse sources on most military products- this is nothing new, if you look over the WWII production, you’ll find each machine gun had a number of different manufacturers. Recently, Colt has been awarded a parallel contract with FN Manufacturing/FNH U.S.A to supply the M240 series machine guns.

U.S. Ordnance, the subject of this article, has been a military contractor for several decades, and supplies the U.S. M60E4 and U.S. MK43 Mod 1 machine guns, as well as the U.S. M2HB .50 caliber machine gun and a new quick-change barrel M2A2 variant. In their new plant in Reno, Nevada, they have the capabilities to manufacture almost any modern weapon system, and the MAG-58/M240 series was a project they were considering taking on. The decision was made for them by the many requests from their customers around the world.  Since the demand was there, they would apply their skills to the program and join the market. It was decided to not try to compete in the U.S. Military market as FN Manufacturing and Colt have the longer term contracts and the immediate needs of their foreign customers were an excellent starting point.

The long process of study, trial, reverse-engineering, lessons learned, and production began. After two long years of engineering and proto-typing, U.S. Ordnance felt they were ready to go to the world market. They have many strong points in their manufacturing capabilities and they used them all through the production process. The modern U.S. Ordnance plant in Reno, Nevada has almost any capability from R&D to CNC, to “Cutting Chips,” to barrel making, and one of their strongest points is in their heat treating capabilities. They’ve been able to extend the life of many of their parts because of the deep study and knowledge they’ve put into this subject. For example, the shoulders that the bolt carrier locks up against in the receivers are a strong lock-up, but still a wear point, and U.S. Ordnance’s induction heat treatment all the way through these parts has had the effect of reducing this wear point significantly.

After performing extensive in-house testing on their first production MAG-58 firearms and firing hundreds of thousands of rounds, U.S. Ordnance was ready for the market. However, they needed an independent test done; something that would show potential customers that the U.S. Ordnance product was up to standard, that they could rely on it, and integrate the weapons into their existing inventories. Steve Helzer contacted GSA Armorer Training Contractor Long Mountain Outfitters in Henderson Nevada, and asked LMO to develop a test regimen that met or exceeded U.S. Military testing. LMO has been involved with numerous tests over the years, so it was quickly decided to consult with several military and industry testing professionals and work up a regimen that answered the following questions:

The tests were designed to answer these questions in a proficient and comprehensive manner. We invite our readers to understand that while this type of test sounds like fun, it is in fact a grueling and demanding task with many hours and many people working to keep the details in order to not invalidate the terms of the test. Since we know that U.S. Ordnance’s 100,000 square foot facility is ISO 9001:2008 certified, and are familiar with the production facility, we just went right to getting answers to the questions about their MAG-58/M240.