Sloboda: Munitions in the Mountains

We thought it appropriate to focus and profile one of the exhibitors at Partner 2008, and Kompanija Sloboda from Ĉaĉak, Serbia seemed a good choice since most weapons users are familiar with them.  Sloboda was started in 1948, and has a reputation for being able to produce almost any small arms ammunition above 14.5mm.

SADJ readers will recognize the name Sloboda as the company that hosts the Living History live fire events that are held at their ranges several times a year by JNJ Import Export.  These Living History events allow industry, military and collectors to spend a week in southern Serbia and experience the culture, visit some of the arms factories, and fire the weapons used in the Balkan region since the First World War.  This is truly an amazing six day experience, firing everything from Tokarev pistols and Yugo Mausers up to PKMs, AGS-17, NSV, DShK, shoulder fired rocket launchers, and crew served weapons.  It would be a mistake to think this is all Sloboda does: this is just an interesting corollary to their main businesses.  Sloboda has an arms production section, as well as producing some items for civilian, household use.

The factory is located about 140 km from Belgrade in the city of Ĉaĉak.  Ĉaĉak (Cha-Chek) is a city of over 100,000 people, and it is a heavily industrialized area in the mountainous region of Serbia.  There is an excellent labor pool of skilled workers, many of them second or even third generation workers at the Sloboda plant.

We toured the facility several times during and after the first Bosnian War, as well as just before the 1999 NATO bombing, when US missiles were dropped onto the facility.  Much of the wreckage still remains, but it was not the critical parts of the facility that were damaged.  The spirit of the factory is strong and production is very highly regarded as some of the best quality controlled munitions in the region if not the world.  We have had several visits to the factory since then, most recently in 2008, and they are in full production on a range of artillery and grenade products including the VOG-25 series and 40x46mm rounds.

Sloboda is known for its engineering staff, as well as the fact that they have a full testing facility and certifications that are up to any standard in the European community.  They are qualified in the ISO 9001:2000 category, and the production is strictly overseen by government inspectors.

Sloboda has a lot to be proud of, and is looking forward to many years of service to the military and police communities.

Oerlikon Heaven. A full bin of brand new, unprimed 20x110mm Rebated Rim Oerlikon brass, ready for loading. Sloboda is one of the few places on the planet that is still supplying ammunition for this reliable old workhorse of a legacy system. There are numerous countries from Southeast Asia, Africa, and South America where the 20mm Oerlikon is operational, and finding modern made, high quality ammunition like that made at Sloboda is important. 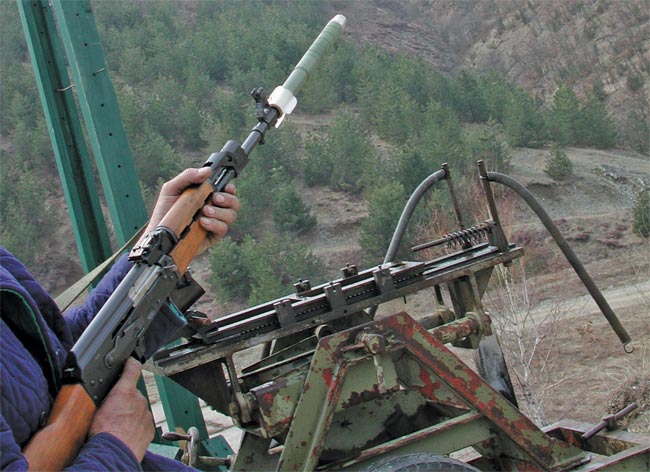 Proper holding procedure for launching a barrel launched grenade with the sling across the chest taking the brunt of the recoil force. Operator sights over the top of the grenade though in this case he does not have the sight installed. Whether the operator uses a full grip on the pistol grip or holds off to the side is a personal preference dictated by experience. Barrel launched grenades have a recoil that is unforgiving at best. 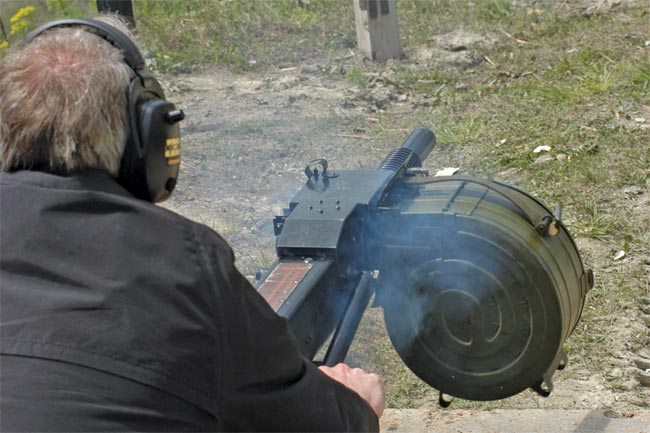 American military customer performs test firing on the BGA-30 at the range. The BGA-30 is factory referred as the ABG-30 but it depends on translation. This is Zastava’s well made version of the AGS-17 and AGS-30 30mm fully automatic grenade launcher. Range is out to 1,700 meters with this system, which weighs half as much as a MK19 or GMG which are in 40x53mm and have a range of 500 more meters. The BGA-30 is an intermediate anti-personnel and anti-material weapon that is very reliable and accurate. 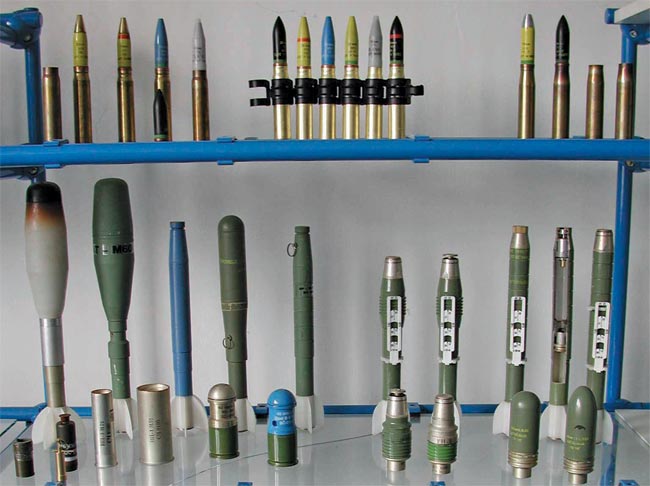 Display wall in Sloboda’s impressive conference room. The General Director keeps a full inventory of products on display for the customers to peruse. 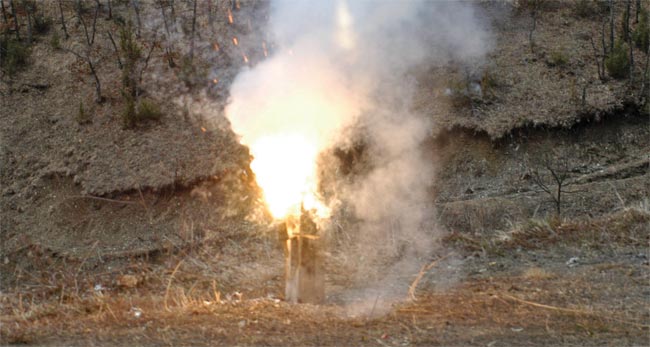 One of Sloboda’s favorite products, while a relatively inexpensive one, is their trip flare. It provides 10,000 candlepower for 15 seconds, with a 115 dB report. 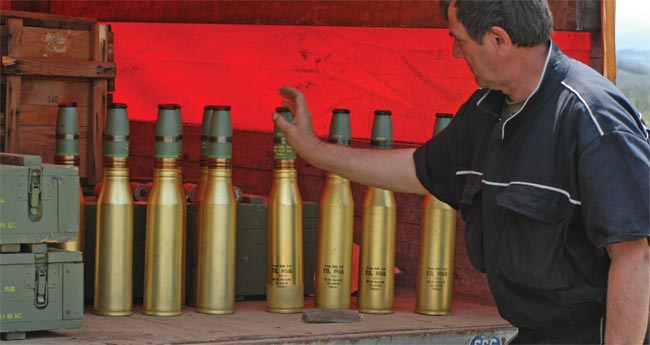 Sloboda’s 57x348mm anti-aircraft bodies are prepared for their fuzes just prior to loading. At this point they are not in a state where detonation can easily occur. These are for the self-propelled anti-aircraft gun, S60 or S68. 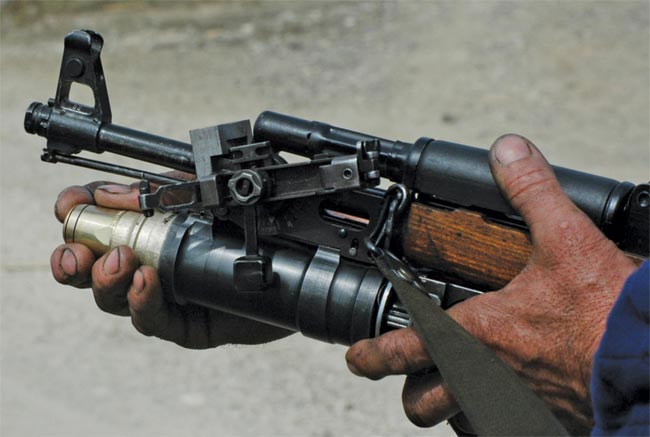 Front loading the BG40 launcher with an M03 HE round. VOG-25 type grenades do not use a case and are muzzle loaded into the launcher, making them exceedingly fast for the operator. Those made at Sloboda are actually the A1 type with self-destruct timed fuze, and Sloboda does manufacture the VOG-25P series of “bounding” grenades that self elevate after landing to increase fragmentation distribution in anti-personnel scenarios. The launcher being used is the Zastava BGP-40, the Serbian made variant of the GP-30 grenade launcher. The original GP-25 launchers made in Russia had a firing pin “sticking issue” that resulted in many damaged fingertips on loading during the Russian fighting in Afghanistan in the 1980s, and the GP-30 series corrected that issue. Zastava makes a highly respected GP-30 variant the BGP40.