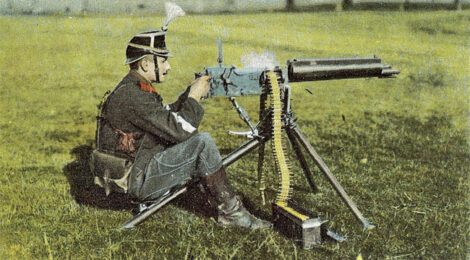 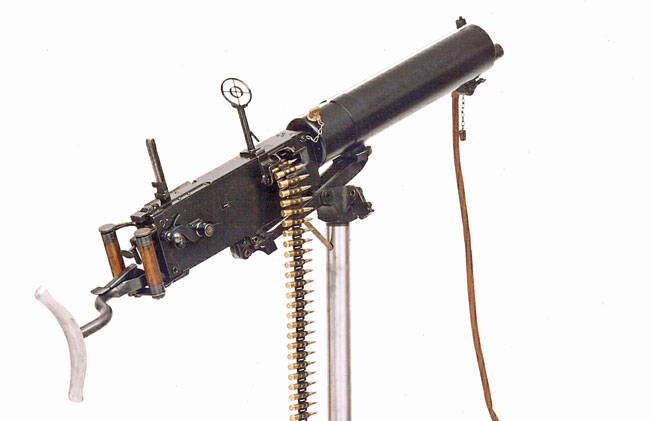 Overall right-hand view of the MG11.

Hiram Maxim was born in the United States in 1840.  His genius lay in his ability to grasp the complexities of chemistry, electricity and mechanical engineering.  He ultimately received over 80 U.S. patents from 1866 to 1884.  Maxim was so prolific in his work that a consortium of New York investors from his main competitor, Thomas Edison, asked him to move to Europe and send back all the new electrical advances in Europe while not doing any research on electrical inventions himself.  Maxim accepted the offer and left for England in 1881.  He soon got bored with that and started looking for a new venue for his creative genius.  The rapid fire weapons of the day were manually operated repeating weapons such as the Gatling gun, Hotchkiss Revolving Cannon and the Nordenfelt Rapid Fire Gun.  Thus began his efforts to invent a truly automatic gun using the energy produced by the expanding gases and recoiling forces produced by a fired cartridge to feed, fire and eject in a continuous cycle with a single pull of the trigger.  In 1883, Maxim applied for his first gun patent and subsequently built the world’s first working prototype machine gun in 1884.  Thus began the series of machine gun development that revolutionized, and changed forever, the methods and tactics of warfare; bringing impersonal efficiency to the capability of killing enemy soldiers on land, sea and in the air.

To those with just a passing interest in classic Maxim machine guns, they are probably familiar with the term “German Maxim” as used as a catchall phrase that refers to all Maxims.  Such is not the case.  American born Maxim produced his machine gun in England and, with its great success, sold his guns all over the world.  Additionally, licensing agreements were made with arms manufacturers in other countries to produce the Maxim machine gun.  Germany, though prolific in their production, was just one such country to license the manufacture of Maxims. Other countries included the United States, Russia (who produced the most number of Maxims), China, Belgium and Switzerland.

In the interest of maintaining their peaceful neutrality, Switzerland has a long history of fielding a well-trained army outfitted with the finest equipment available.  Very early on, the Swiss were quick to grasp the advantages of rapid-fire weapons and acquired Gatling guns in 11mm in the 1870s and Gardner Guns (in the then prototype Swiss 7.5x55mm cartridge) in the 1880s. 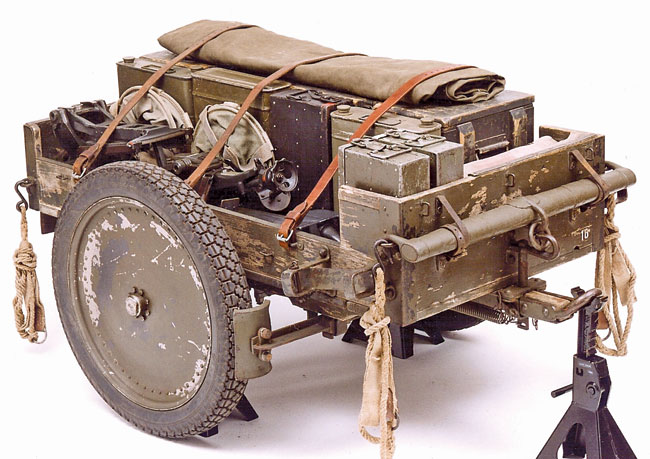 Front view of the fully loaded Swiss utility cart containing all of the equipment necessary to transport the MG11: Gun chest with gun, tripod, water chest, belt filling chest, armorer’s chest, ammunition chests and tarpaulin. The smaller accessories such as the AA sight, binoculars and optical sight fit in the canvass covered storage box to the front of the cart.

MG94
In 1887, Hiram Maxim arrived in Thun, Switzerland to compete in the long-range shooting trials with his “World Standard” Model of 1887 machine gun in 11mm.  The Swiss were impressed and placed an order, but they wanted the gun chambered in the still new and experimental 7.5mm Swiss cartridge.  This caused Maxim some problems and it was back to the drawing boards to figure it out.  The Model 1887 “World Standard” was a massive weapon chambered in the rimmed .45 caliber/11mm black powder cartridge.  Maxim’s first attempt was to simply tweak the “World Standard” for the smaller, rimless, Swiss cartridge.  This converted model suffered many malfunctions.  In his next attempt, rather than convert the 11mm Maxim, he redesigned the gun specifically to accept the 7.5mm rimless cartridge.  This resulted in Maxim’s first “Reduced Caliber” (approximately .30 caliber) machine gun.  This gun was tested in 1889 (the same year the 7.5mm Swiss cartridge was officially adopted) and fired about 5,000 rounds without a serious malfunction.  The decision was made to adopt the Maxim into the Swiss Army.  It was found that the large water jacket, and the resulting extra weight, did not lend itself well to movement in mountainous terrain and Maxim was constantly making small improvements to his gun.  Over the next several years, modifications were introduced to the Swiss Maxim that included a smaller and slimmer water jacket.  This was standardized as the MG94 in 1894.  All of the MG94s (approximately 72 guns) were manufactured by Maxim Nordenfelt Guns & Ammunition Company Limited (MNG&ACL) at Nordenfelt’s 10-acre factory in Erith, England.

MG00
In 1899, forty more guns were ordered from Maxim’s new company, Vickers Sons & Maxim Ltd. (VSM) of London that incorporated a few more changes and modifications and was officially adopted by the Swiss in 1900 and designated as the MG00.  These changes included reverting back to the larger standard sized heavy brass water jacket, a new style “S” shaped crank handle and the installation of a bracket to mount the Swiss optical sight.  In addition to VSM, Switzerland contracted with Deutsche Waffen und Munitionsfabriken, A.G. (DWM), a large German arms-producing factory in Berlin licensed to manufacture Maxims, to make the MG00 as well.  It is unknown exactly how many DWM MG00s were shipped to Switzerland but the number is estimated at around sixty.  Thus, Swiss MG00s may be found with VSM or DWM markings. 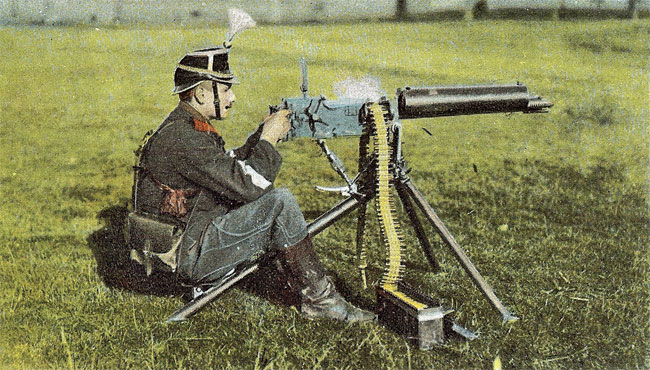 Hand-colored photograph in the form of a postcard of a Swiss soldier firing the MG11.

MG11
Switzerland regularly conducted trials to stay abreast of current technology.  The Maxim MG00 continued to be tops in its field against newcomers such as the Forbes machine gun, air-cooled Extra Light Maxim and the French Hotchkiss.  Nevertheless, in 1906, the new Austrian Schwarzlose water-cooled machine gun, weighing in at 44 pounds, threatened to make the heavy MG00 obsolete causing a new round of trials to be held.  Maxim’s patents had expired and VSM began introducing the new Vickers machine gun.  DWM then introduced its new Commercial Model 1909, which was substantially lighter than the previous Maxims.  Impressed with DWM’s new Commercial Model 1909, the Swiss adopted it two years later as the MG11.

Over the next several years, DWM shipped a total of 167 MG11s to Switzerland until 1915 when shipments ceased due to Germany’s war production requirements that demanded their full attention during World War I.  The Swiss found themselves in a dilemma without a supplier for their mainstay heavy machine gun, and the National Assembly decreed that all future manufacturing requirements were to be done by the Government Arsenal Waffenfabrik (W+F) in Bern.  Production began at W+F in 1915 and continued to 1946 with 10,269 MG11s being built.

Changes to the MG11 in the Interwar Years
In the years between World War I and World War II, the Swiss made some more changes to the MG11.  In 1934 and 1935, they replaced the riveted cloth belt with a metal, articulated, non-disintegrating belt that required minor changes in the feed pawl within the feed block.  The belt-loading machine was then modified by removing the cloth pocket-opening ram that was no longer needed, to accommodate the new metal belts.  Ammunition boxes were manufactured out of metal rather than wood and contained spacers to prevent the rounds from slipping during shipment.  A simplified recoil booster/flash hider was employed replacing the 1909 DWM booster.  The trigger group was redesigned to allow one-hand operation while the other hand was used to manipulate traverse and elevation adjustments, and limit stops for traverse and elevation were added to the tripod.  In recognition of the newest threat of aerial warfare, a mounting plate was added to the top cover for attaching an anti-aircraft ring sight and a white stripe was applied along the top of the entire water jacket to help facilitate quick target acquisition of aerial targets.

MG11 Mounts
The MG11 was mounted on the DWM designed commercial Model 1909 tripod, and made at the Waffenfabrik Bern factory.  This tripod was more stable than any other tripod in use at the time and was considered the finest mount available.  Features of this tripod include a spare lock (bolt) box riveted horizontally under the cradle bracket, telescoping front and rear legs with height adjustment marks for the front legs numbering 1-6.  The traverse and elevation mechanism had stops to control the field of fire and a range card listing 100 to 1,500 meters was riveted to the top of the elevation handwheel mechanism cover.  This tripod was among the last to incorporate a seat on the rear leg for the gunner.  When collapsed for transport, the overall length was just 40 inches and weighed 55 pounds.