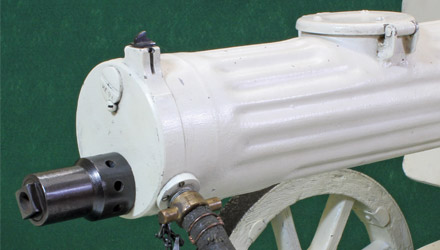 The Origin of the Russian “Tractor-Cap” M1910 Maxim

Collectors and historians are familiar with the Russian “Tractor Cap” or “Snow Cap” Maxim machine gun.  It was a modification of the PM1910 (Pulemyot Maxima na stanke Sokolova or “Maxim’s machine gun Model 1910 on Sokolov’s mount”) that did away with the small water filler hole in the water jacket and instead a much larger hole was cut into the top of the water jacket that allowed snow, ice or larger volumes of water to be introduced quickly into the water jacket.  The hole was covered by a tractor radiator cap that was hinged on one side and secured by a clasp on the other side.

Historians are unclear on exactly when the Russians started to incorporate this modification in production runs of Maxims during World War II with a few starting as early as late 1941, while a majority and general consensus of others being sometime in 1943.  Nevertheless, it was a great idea that served well particularly in cold, wintery climes.  However, it was not a Russian idea.  The Russians, in fact, copied the idea from the Finns as a result of the Soviet-Finland (Winter War) of 1940-41. 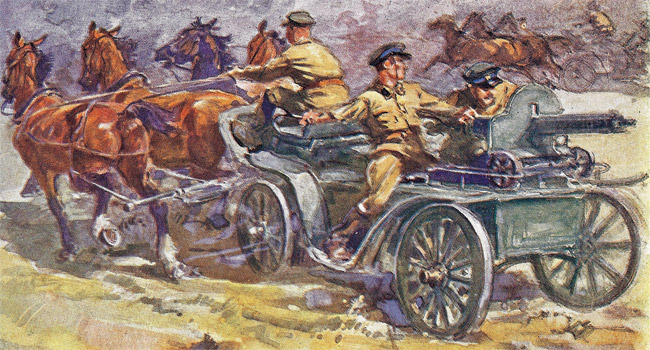 ‘Tachankas On Line Of Fire’ by G. Savitzky 1931. Russian Maxim Model 1910 machine gun mounted on a cart with four horses in the Russian Civil War era. The word “Tachanka” refers to the spring carriage and was widely used to carry Maxim machine guns during the war. In modern Russian usage, it means a machine gun unit with three or four horses as depicted in the painting and was a widely used propaganda image.

The Model 1905 had many brass parts and a brass water-jacket.  The Model 1910 did away with these brass parts and now included a fluted metal water jacket and was mounted on the Sokolov wheeled mount.  The Sokolov mount was deemed unsatisfactory for the forest and swampy terrain of Finland and the Finns developed a tripod for infantry use that was similar in style to the German DWM commercial Model 1909 tripod but was not a direct copy.  The Finns designated their Maxims as the M09/21 in 1921.  Further refinements in 1931 addressed issues with the need for a metallic belt and anti-aircraft capabilities that included an accelerator located on the muzzle of the Maxim that could be quickly adjusted allowing two rates of fire: a critical factor in increasing the Maxim’s role as an effective anti-aircraft weapon as well as the addition of an extra metal leg extension that would be carried underneath the tripod.  This resulted in a new designation of the Maxim as the M32/33. 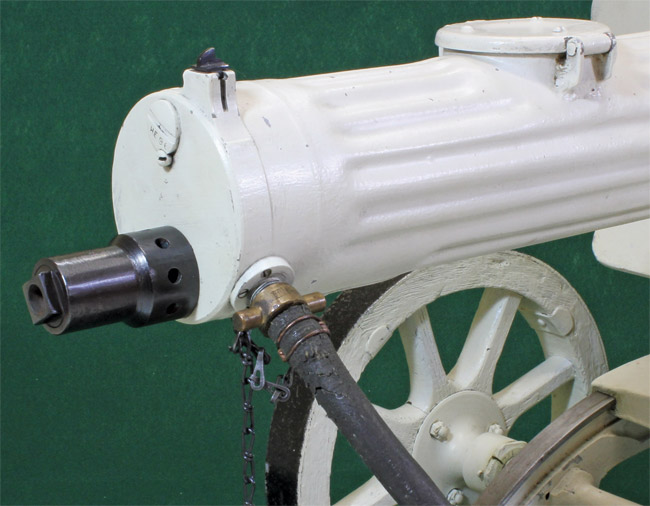 Business end of the Russian Model 1910 Maxim machine gun. The front end cap contains the front sight, steam exhaust port with condensing hose attached and black muzzle booster. Also seen between the muzzle booster and the front sight is the forward attaching end of the internal steam tube that runs the entire length of the water jacket. The “tractor cap” can be seen on top of the water jacket.

But there was another major, but extremely simple, refinement of these Maxims that dealt with the method of water cooling.  Maxims are water cooled machine guns.  High volumes of fire result in extremely hot barrels that must be kept cool and water contained in a jacket surrounding the barrel was the method of cooling at that time.  The water would begin to boil after several belts of ammunition was quickly fired, turning the water into steam that caused steam pressure to build within the water jacket. An outlet was provided for the steam to escape to relieve the pressure.  Eventually, the water would boil off below the level of the barrel and fresh water would have to be introduced back into the water jacket to replenish the volume.  The Finns were rightly concerned that there must be a more expedient way to fill the water jacket surrounding the Maxim’s barrel particularly when being used in an environment that precluded the use of water in its liquid form.  After a period of trial and error, a simple and innovative design change was ordered that took advantage of Finland’s long, cold winters.  The Finns replaced the small filler port in the water jacket of the older Maxims with a larger port on top of the water jacket and added a snap-cap that secured the larger filling port.  This provided an advantage for two reasons.  First, the cap could be quickly opened to allow a larger volume of water to be rapidly introduced into the water jacket and, secondly, the new system allowed both snow and ice to be introduced into the water jacket during the winter when water in its liquid form was non-existent.  This modification occurred in 1939 and was truly both an inventive and radical adaptation and was so successful than many older Maxims in Finnish stockpiles were converted to accept these so-called “snow-caps.” 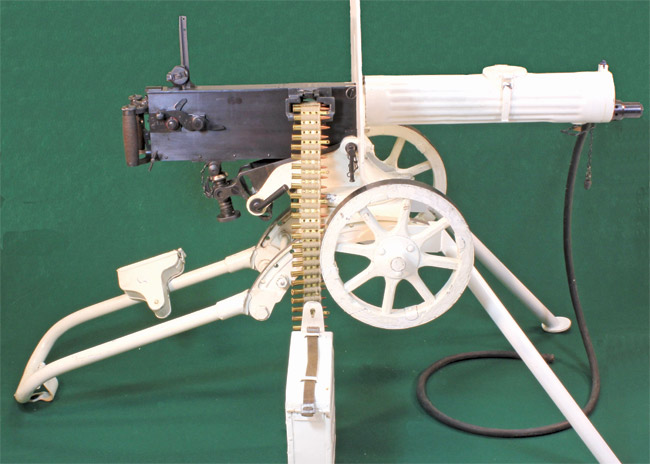 Right side profile view of the Russian Model 1910 Maxim. Note the early removable tripod-like legs that enabled the gun to be brought up to a higher firing position. These were found to be a detriment to the health of the gunner and were soon discarded. The odd-shaped box attached to the trailing leg frame contained a spare lock (bolt) for the gun. Note the enlarged ‘tractor cap’ on top of the water jacket to facilitate the ease of introducing snow or ice into the water jacket.

The Soviet forces invaded Finland with 21 divisions totaling some 450,000 men – approximately three times as many soldiers as the Finns, 30 times as many aircraft, and a hundred times as many tanks.  The Red Army, however, had been crippled by Soviet leader Joseph Stalin’s Great Purge of 1937, reducing the army’s morale and efficiency shortly before the outbreak of fighting.  With more than 30,000 of its army officers executed or imprisoned, including most of those of the highest ranks, the Red Army in 1939 had many inexperienced senior officers.  Because of these factors, and high commitment and morale in the Finnish forces, Finland was able to resist the Soviet invasion for far longer than the Soviets expected.  But ultimately the Finns saw that they would eventually be overwhelmed and sued for peace signing the Moscow Peace Treaty ceding 11% of its pre-war territory and 30% of its economic assets to the Soviet Union.  But the Soviet forces did not accomplish their objective of the total conquest of Finland but did gain sufficient territory along Lake Ladoga to provide a buffer for Leningrad.  The Finns, however, retained their sovereignty and enhanced their international reputation.

The weather that winter was particularly cruel.  Fighting was brutal for both sides and the Soviets suffered heavy casualties.  But the Russians did learn many cold-weather lessons and one of those lessons was leaned from the enemy: how to keep their Maxim guns operating when no liquid coolant was available to cool their weapons.  They also learned from the Finns that painting their guns in a white camouflage helped break up the outline of the weapon emplacement in a snow environment.  These and many other “cold weather” lessons would ultimately serve the Soviets well in the coming years as they fought the Nazis on the frozen steppes of their Mother Land. 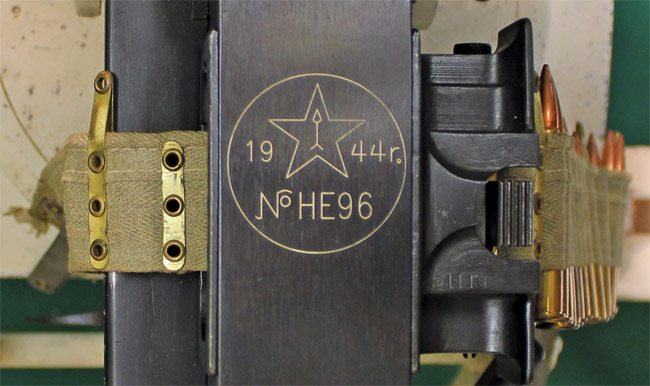 Top cover of the Russian M1910 Maxim showing the data markings and the feed block for the loaded belt of ammunition. The arrow in the star denotes that this gun was made at the Tula Arsenal factory with the manufacturing date of 1944. The serial number is the Cyrillic letters HE and 96. As is common to all Maxims, the loaded canvas and brass belt containing 250 rounds is fed into the feedblock from the right hand side. 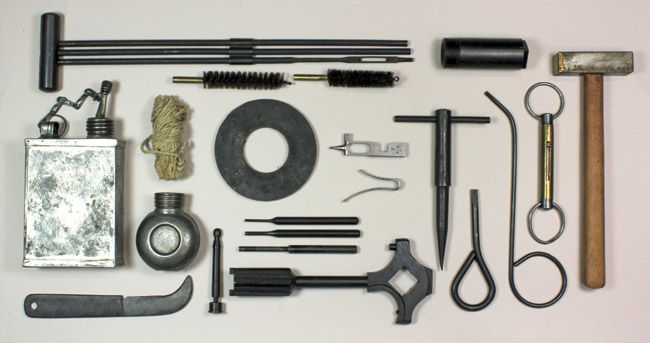 Spare parts and gunner’s kit for the Russian M1910 Maxim. Issued to each gun, the canvas shoulder bag kit contained cleaning rods and jigs, key spare parts, and tools needed for proper maintenance in the field. Note the large round rubber gasket as a replacement for the one used in the ‘tractor cap’ to prevent leakage of water in the jacket. 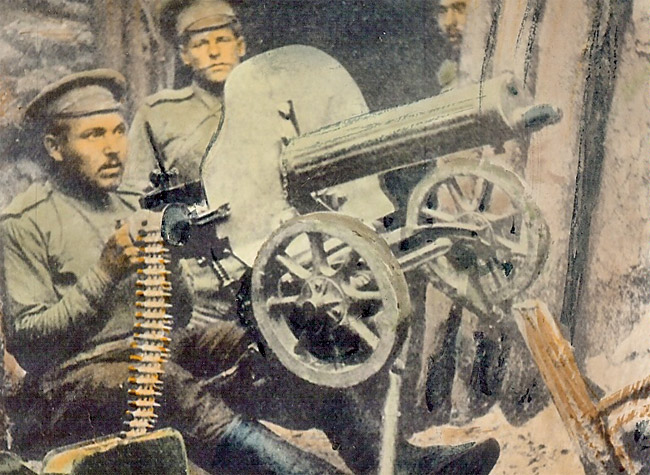 Russian Maxim gun on early Sokolov mount with tripod legs in place in World War I. The removable legs were later discarded as being detrimental to the well being of the gunners. 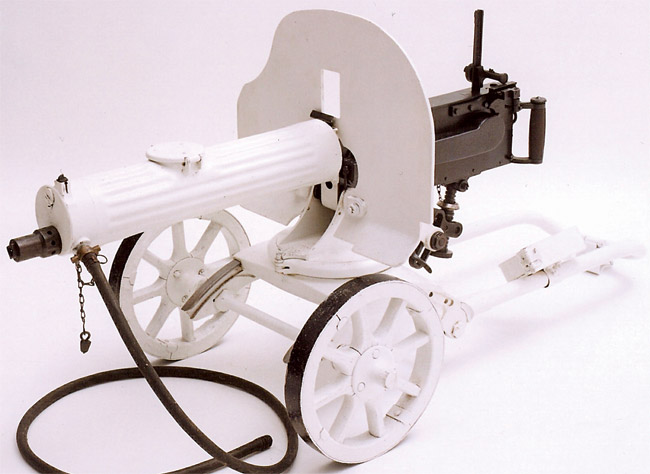 Russian Model 1910 Maxim on wheeled Sokolov mount painted in winter camouflage. Note the large cap on top of the water jacket and the steam condensing hose to remove steam pressure build-up in the water jacket.