The Ditsong Museum of Military History

ABOVE: Two 37mm “Pom-Pom” guns- large Maxim water-cooled machine guns with brass jackets, grace the entry to the exhibits. This pair of consecutive serial number Maxims (542 and 543) were surrendered to General the Rt. Hon. Louis Botha at Khorab, South West Africa, on 19 July, 1915.

The Republic of South Africa has a short history compared to the human presence in the region; it was formed in 1961 after enduring more than 4 centuries of European influence and foreign control. The military effects of that presence have led to many events that are well-known outside of South Africa- the Zulu Wars, the Second Boer War, and South Africa’s participation in both the First and Second World Wars. While the primarily English and Dutch (Boer) colonization had been ongoing over those centuries, the discovery of diamonds and gold in the mid-1800s had vastly increased the influence over what had previously been only a location-focused importance to those countries. South Africa rules over the seas that lead between the Atlantic and Indian Oceans, and proved its worth to the British during two World Wars.

The Museum is situated in Erlswold Way in the northern Johannesburg suburb of Saxonwold adjacent to the Johannesburg Zoo and close to the recreational area of Zoo Lake. It takes a special trip to get there and that is well worth the time and effort. While the rich history of the region is covered in many ways, the primary displays that would be of interest to the readers of this magazine would probably begin with the Zulu Wars and the Second Boer War. The influence of South Africa in those World Wars is not to be understated.

There are some very interesting aircraft in the museum, as well as a large display area of cannon and howitzers. Our viewing was concentrated on the small arms. Since this issue of SADJ is being handed out at the AAD show, we hoped to give attendees an interesting museum to visit. One side benefit of visiting the museum, is that there is actually a store inside the main store, which has a collector’s corner of real historical items for sale. Usually all you can find are the current made collectables, but this author was able to purchase several historic medals. No national treasures are up for grabs or we would have offered on the “Pom-Poms” but it was certainly nice to have a military antiques dealer on premise. 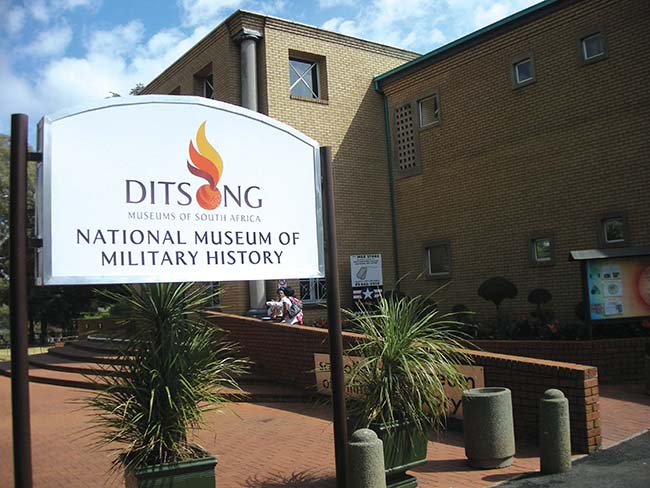 The Ditsong Museum of Military History

The South African War Museum was opened in 1947 and underwent several name and control changes, and finally became part of the Ditsong Museums of South Africa in 2009. 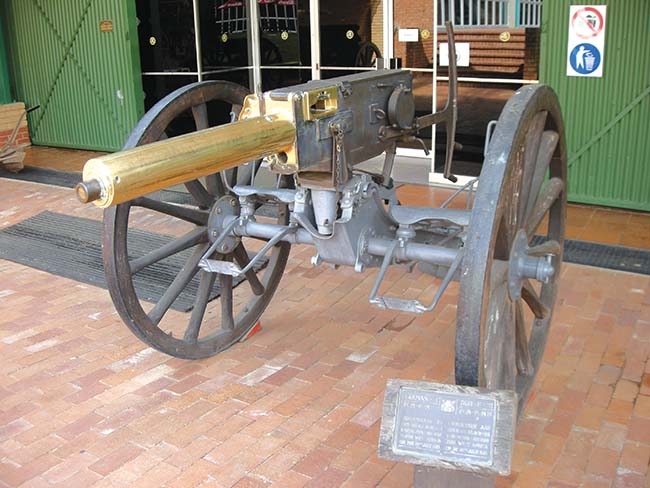 Right front view of one of the two Maxim “Pom-Poms” guarding the entryway. 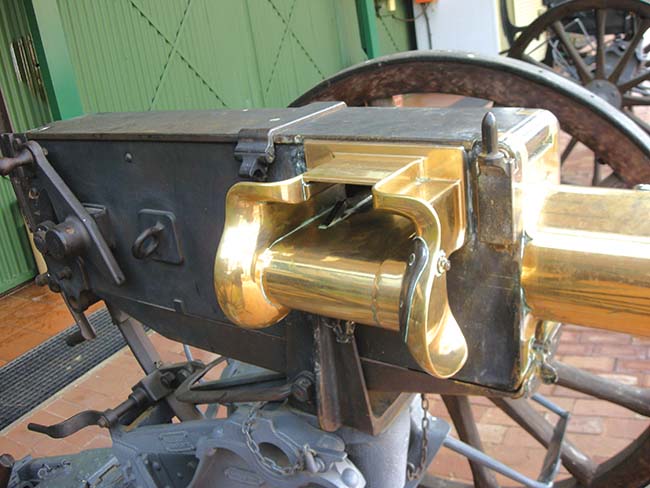 Feed tray of a Maxim “Pom-Pom.” 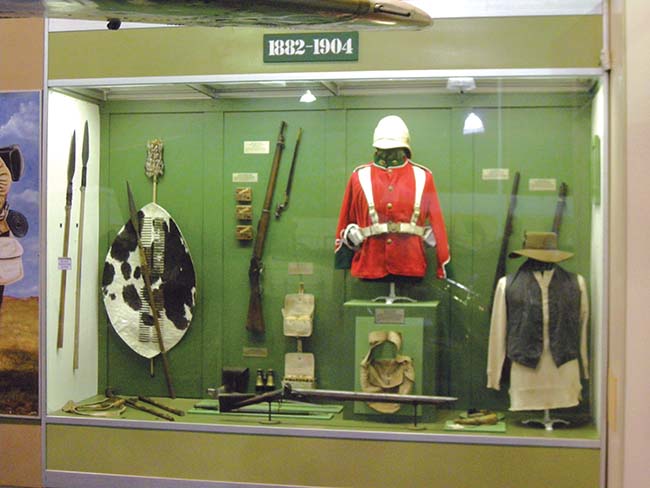 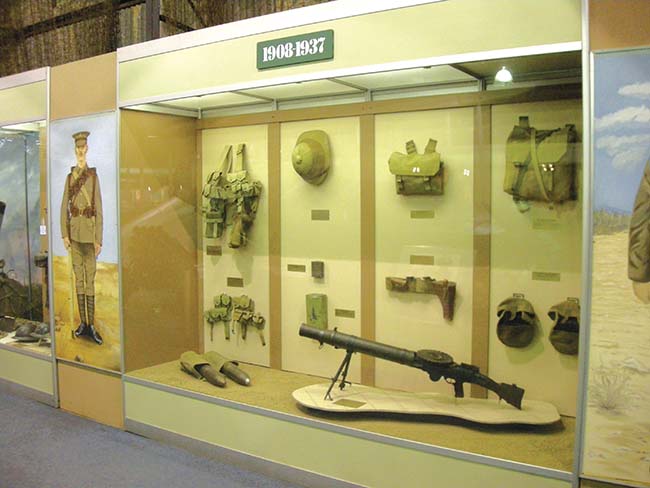 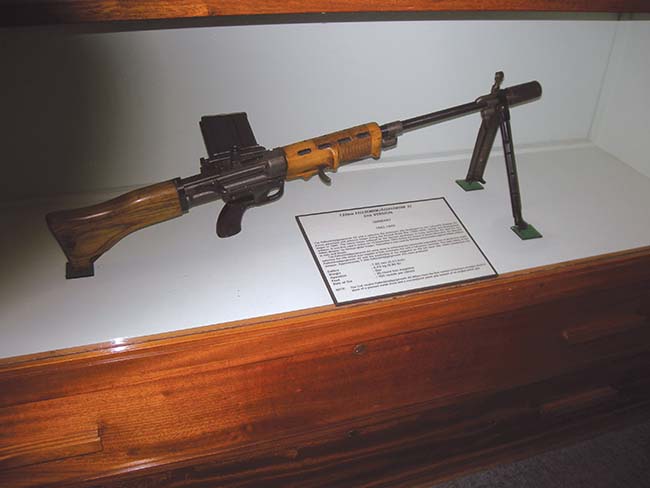 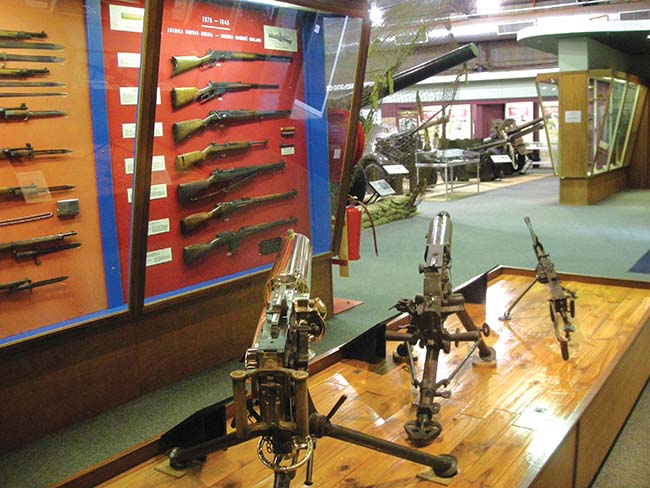 View from the galleries section into the main area of cannon; in the front is a brass Maxim from Vickers Sons & Maxim Ltd; then an Austrian 07/12 Schwarzlose machine gun; and a Breda Model 30 machine gun on a rare light tripod. 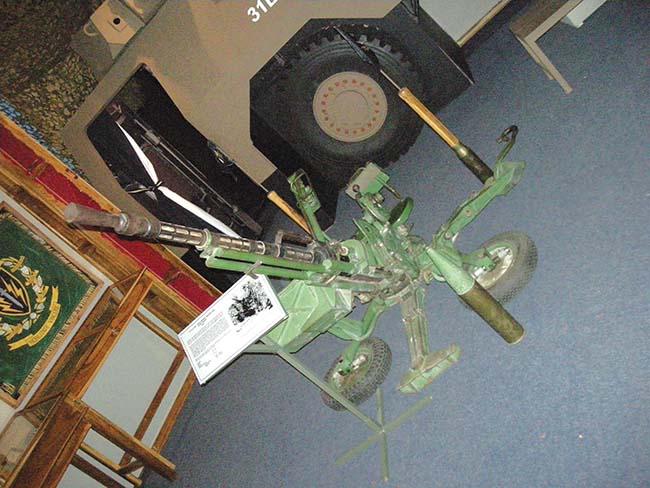 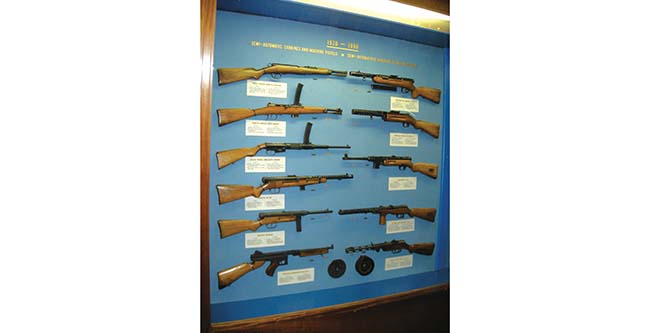 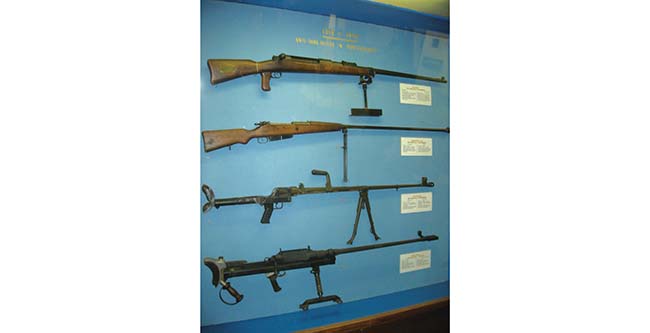