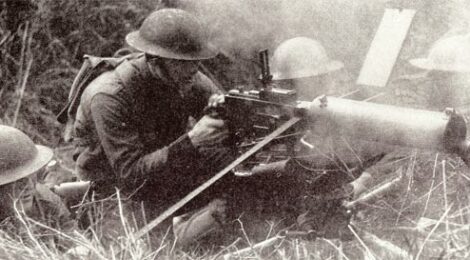 At some disputed barricade in the Meuse-Argonne front, US soldiers lay down fire with their Browning Model of 1917 machine gun.

Post War WWI Development
It was fortunate that the war ended when it did in terms of working out the problems on the Model of 1917 Browning water-cooled machine gun.  Production continued after the war with most of the 72,500 guns ultimately produced being assembled in the post war era.  It was during this time, from about 1919 to the mid 1930s that work continued to perfect the Browning.  Comprehensive testing continued, metallurgy improved, standardization of manufacturing processes was established and different design changes were conceived and tried.  In 1922, the rear sight was changed from meters to yards.  (Meters were used as all the firing tables and maps used in World War I were in meters.)  In 1925, there were modifications to the buffer to accommodate the 15% increase in recoil energy due to the adoption of the more powerful 172-grain boattail M1 .30-06 cartridge, but the sight graduation wasn’t changed until 1932.

The biggest modification was the retrofitting of Model of 1917s with a reinforcement stirrup under the breech lock cam to strengthen the sides and bottom plate.  Different methods were used as were different sizes of brackets.  Initially, a simple “U” bracket was either riveted or welded just under the breech lock cam.  It wasn’t until 1936 that a program was initiated by Rock Island Arsenal to convert all existing Model of 1917 Brownings with all the upgrades.  Some of the changes included a large, new-manufactured reinforced bottom plate that extended up the sides of the receiver and riveted in place, a new belt feed lever and the new rear sight in yards for the M1 ball cartridge.  A new tripod cradle was also introduced that simplified construction and incorporated a traverse and elevation mechanism as one unit at the rear of the cradle.  This improved version of the Model of 1917 was designated as the M1917A1.  (The “Model of” designation for U.S. arms was dropped in 1939 and replaced with the letter “M”.)

WWII
During World War II, more changes occurred to the M1917A1 that included an improved bolt, the bronze end cap and trunnion block replaced by steel, the steam tube assembly was strengthened and the rear leaf sight graduated for the now standard M2 ball cartridge.

While almost all Model of 1917s were ultimately converted to the A1 specifications, production resumed from 1936 to 1945 with 55,869 M1917A1s being produced by Rock Island Arsenal.

The M1917A1 was the final achievement of the heavy water-cooled machine gun.  The water-cooled Browning was already considered obsolete by the end of World War II because of its use of water and weight and was ultimately supplemented with the light weight air-cooled Browning M1919A4, which functioned exactly the same as the M1917A1, and used the same internal parts, except without the water jacket and used a light weight M2 tripod.  Nevertheless, the M1917A1 was used extensively in both theaters of operation during World War II and continued service throughout Korea and the beginning stages of the Vietnam War.

John Browning’s vision of a simple and reliable machine gun operating system is a testament to his inventive genius.  The exact same operating principle was applied to the larger .50 Browning M2 machine gun that is still in use to this day.

Accessories
Accessories for the M1917 consisted of a water condensing can, water condensing hose, flash hider, combination tool, M1917 clinometer, M1918 belt filling machine, headspace and timing gage and a ruptured case extractor.  Ammo boxes were made of wood in two styles, both slotted to fit on the M1917 cradle.  The two styles of wood boxes differ in that the early ones had a straight front while the later ones had a slanted bottom to the front.  This was so they would also fit on the short lived M1918 tripod cradle.

Accessories for the M1917A1 consisted of those accessories mentioned above, albeit with some updating and modifications, as well as several styles of metal ammunition cans, carrying handle, anti-aircraft front sight, anti-aircraft tripod extension, and canvas covers of various types.

Approximately 20,000 M1917 tripods were produced in 1917-1918 by two manufacturers: the Nelson Blower & Furnace Company of Boston, and the Crown Cork & Seal Company of Baltimore.  The M1917 tripod was an improvement of a tripod originally designed and patented by John Browning for his early water-cooled guns that he built in 1901 and in 1910.  The basic improvements were lightening the total weight by cutting spaces in the left and right tripod cradle side plates and refining the elevation mechanism.

Unlike the later M1917A1 tripod that had a traverse and elevation mechanism incorporated as a single unit at the rear of the cradle, the M1917 only had an elevation adjustment at the rear operated by a large elevation hand wheel marked with graduations to correctly set the elevation of the gun.  Traversing was by a different method whereas fine traversing was accomplished by a “slow motion” worm gear located within the cradle socket above and ahead of the rear leg clamp.  Additionally, the M1917 Browning gun attaches directly to the M1917 tripod cradle, whereas a separate pintle is attached to the gun (either M1917 or M1917A1) that fits into a socket in the head of the M1917A1 tripod.

Because of the height of both tripods and due to the weight of pulling a loaded belt from ground level through the feedway, which seriously affected the operation of the gun, both the M1917 and the M1917A1 tripods had a bracket on the left side cradle plate that facilitated the attachment of a slotted wood ammunition box.  This presented the belt close to the mouth of the feedway and provided ease of operation of the working parts of the gun as the feed pawl lever is directly attached to the recoiling bolt.

Ordnance Captain S.C. Stanley best described the M1917 tripod by writing, “The Browning Machine Gun Tripod, Model of 1917, consists of four major parts; the legs, the socket, the pintle and the cradle.  The legs are steel tubing having feet attached to one end and the serrated connections to the other.  The socket is of manganese bronze and is the part to which the legs are assembled, in which the pintle revolves and in which the slow motion mechanism and stops are attached.  The traversing clamp is also attached to the socket.  The pintle is the center member of the tripod and carries the cradle clamp and traversing stop pin.  The cradle is attached to the top of the pintle and is used to allow a quick elevation or depression of the gun.  It carries at its rear end the elevating mechanism which allows a micrometer adjustment of the gun in elevation.  It has a 360 degree free traverse graduated on an adjustable dial at 20 mil intervals for 6,400 mils; a clamping feature on the pintle similar to that used on the British (Vickers) Mark IV Tripod; a slow traversing worm mechanism graduated in 2 mil intervals and traversing stops adjustable to a single mil both having a quick throw off to allow for free traverse; an elevating mechanism of 125 mils capacity and graduated to 1 mil on an adjustable dial; a cradle construction on the pintle which allows a quick elevation or depression of 30 degrees each way with graduation marks at 12-1/2 mil intervals.  The weight is approximately the same as the British (Vickers) Mark IV Tripod, that is, 50 pounds.”

Captain Stanley continues in a conclusion that, “This tripod was not originally designed for the slow motion mechanism, or for stops.  Accordingly the slow motion and stops are not especially efficient, although they are very quick and positive in action.  The tripods have been issued to troops and such reports as have been received show them to be highly satisfactory.  No adverse criticism has been received except in regard to the stops and slow motion mechanism.”

M1917 Browning machine guns were upgraded and modified to A1 specifications in a rebuild program in the 1920s and ‘30s and an original M1917 Browning machine gun that has not been modified and upgraded is exceptionally rare.  So too, the M1917 tripods were also modified and upgraded to the A1 tripod specifications.  This often consisted of removing the traversing worm gear adjustment wheel mechanism attached to the worm gear and replaced with a tear-shaped cover over the resulting hole.  An original, as manufactured, M1917 tripod is an extremely rare collectable accessory.

Tags: 2009, Browning, M1917, Model 1917, Robert G. Segel, V1N3, Volume 1
← Lekhwiya: Qatar’s Special Forces Group
Indo-Defence 2008 →
Distributed at trade shows worldwide, Small Arms Defense Journal is a bimonthly publication that focuses on small arms, accessories, gear for the soldier, new products, industry news, and defense trade shows. The first issue of SADJ was Spring 2009, which launched at the LAAD show in Rio de Janeiro, Brazil. SADJ (pronounced “sage”) is targeted toward military, law enforcement, and defense industry professionals. Our job is to reach these groups and tailor content to their interests while producing a publication that is applicable to an international audience.