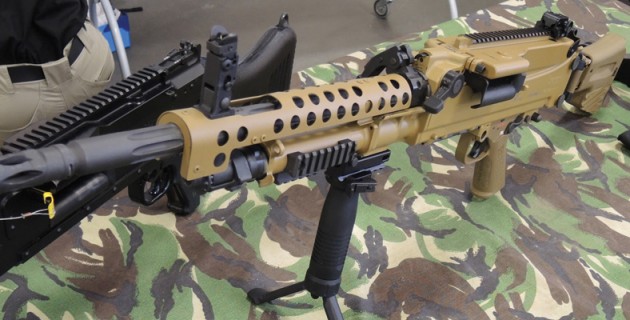 Interested in attending Symposia at Shrivenham? Take a look at our Show Info page for all the details!

This event is held annually in the last full working week of August at the Defence Academy of the United Kingdom. It remains the focal point for European infantry weapons and small arms developments and complements the National Defense Industrial Association (NDIA) Joint Armaments conference normally held annually in May in the United States.

The Shrivenham Symposium provides a personal atmosphere, giving a vital opportunity to ‘network’ and the 27th annual Small Arms and Cannon Symposium held in August of 2013 continued to be well attended, even if budgetary constraints prevented some from attending. This year the symposium was again held in the two full day format (changed by attendee’s request in 2011 from two full days over a three day format) and this years’ Symposium was therefore held over the 21-22 August 2013. It is rumored that the 2014 edition of the Small Arms and Cannon Symposium will include an extra event- a live fire exercise where attendees can participate and vendors can have their products on the line for testing. This discussion started many of the industry attendees who did not have booths this year to discuss setting up booths and going to the range- always a hit for everyone involved. Attendees get to try lots of weapons and accessories, vendors get to show the “proof in the pudding” by letting potential buyers try their wares. Fingers are crossed that this will be possible in 2014. Beechwood Equipment Ltd. are a regular attendee and a major UK company specializing in specialist products for the law enforcement and military markets. They are the UK agent for SIG-Sauer products and a range of optical and night-vision products. www.beechwoodequipment.com

In addition this year, the second edition of a one-day Wound Ballistics Symposium was held immediately prior to the Small Arms & Cannon Symposium to enable delegates who wished to attend both symposia to do so in a single visit.

The programme format consisting of short presentations on various subjects is well established and allows maximum coverage of a large subject matter area to cater for the varied interests of those attending. The programme over the two days offered twenty presentations and the wide-ranging spectrum of the presentations covered the following subjects: Following on from previous years, subject matter of the presentations reflected an increasingly pragmatic approach to what is achievable in the immediate future, (particularly when set against financial constraints). Again absent were the presentations, or indeed updates, on Future Soldier. While in excess of twenty such programs remain globally on the books, with perhaps the notable exception of Canada, all appear to be moving forward, albeit slowly with the business end of the programme retaining existing small arms and light infantry weapons already in service or somewhat modified to support the primary areas in which such programs are indeed advancing, such as situational awareness, command and control at the unit level and enhanced personal protection levels.

As commented here last year, recent combat operations have fined-tuned the needs of the warfighter in terms of the infantry weapons mix required, which had seen the return of the larger rifle calibre 7.62 x 51mm weapons in general and the ‘Sharpshooter’ or ‘Designated Marksman’ rifle in particular. The low and high-velocity grenade-launcher is clearly here to stay and the user has an increasing variety of options in terms of ammunition types available, including less-lethal options. Primetake Ltd. are the manufacturers of specialist ammunition for both military and law-enforcement applications. www.primetake.co.uk

The current draw-down and pending final withdrawal from Afghanistan of NATO forces has required participants to review their national inventories post-operations. UK MOD briefed on the way ahead in terms of small arms inventories – the L129A1 Designated Marksman Rifle (Sharpshooter) purchased in considerable numbers as an Urgent Operational Requirement (UOR) is to be taken into the core inventory, the Combat Shotgun (L128A1) will not be. (In this author’s opinion, the militarized shotgun has seen an ad-hoc use over the decades in the British service, primarily in insurgency operations or for use in explosive ordnance disposal, being purchased as needed and is needed). The selection of the Glock 17 as the future handgun (L131A1) in the British service will also see a change in issue strategy – gone will be the issue of a handgun to every combatant as a defence against ‘Blue-on-Blue’ encounters, reverting, as in the past, to one of need or primarily a means of self-protection when either duty or circumstances dictate against carriage of a larger weapon.

Attention continues to be directed at the harmful effects of small arms ammunition discharges, with tests showing that issues can also arise with the new non-toxic types (lead-free) currently being introduced. The operational use of weapon suppressors has also raised the issue of post-operational use as standard under a ‘duty of care’ banner. Viking Arms Ltd. is a UK based company offering a full range of Defence Equipment and Accessories. Services provided include, Armourer and Product Training, Design Liaison R&D and Bespoke Equipment. They are also the UK Agent for Brugger & Thomet products and Glock, having been selected to provide the Glock 17 self-loading pistol recently selected by the British armed forces as their next generation pistol. www.vikingarms.com

Additional activities provided as part of the Symposia programme include visits to the on-site DA-CMT Small Arms Facility, which is a teaching and reference collection of infantry weapons. The staff of this facility also provide a live-firing demonstration of selected weapons and accessories to which delegates are invited. The Symposia itself is held in the Defence Capability Centre (DCC – not to be confused with DCC – Dismounted Close Combat) which houses the Defence Academy collection of artillery, armoured vehicles and ammunition, and tours of the various collection can be arranged on request.

A long-established feature of the Shrivenham Small Arms and Cannon symposia has been the formal evening dinner. The venue again this year, after a very successful event last year, was the Steam Railway Museum of the Great Western Railway in the nearby town of Swindon. The museum is situated in the renovated premises of the former Swindon Railway Works and guests were seated among the major and minor historic artifacts of the museum for an excellent four-course dinner, with pre-dinner drinks (with a chance to wander around the museum) and wine in abundance. A good time was again, as the British would say, had by all.

SADJ would like to encourage the small arms community to lend their support to the XXVIII Small Arms & Cannon Symposium to be held in August 2014. Shield Firearms & Sights Ltd. is a UK manufacturer of sights and sight mounts. They are also a training provider and firearms distributor, and are the UK agent for Smith &Wesson products. www.sheildpsd.sharepoint.com

Eight papers were presented during a busy day. These are listed by title for the benefit of those professionally involved in the subject matter area as a guide to future attendance:

It goes without saying that the subject matter of the presentations is not for those of a sensitive nature and those who work in this area must be given credit for continued work that has seen significant advances in recent years in the understanding of the wounding mechanism and concurrent support to the forensic science community.