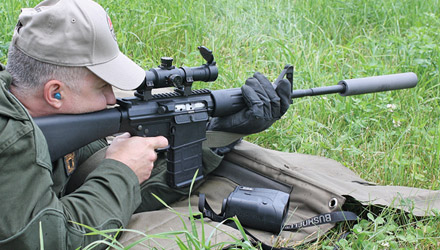 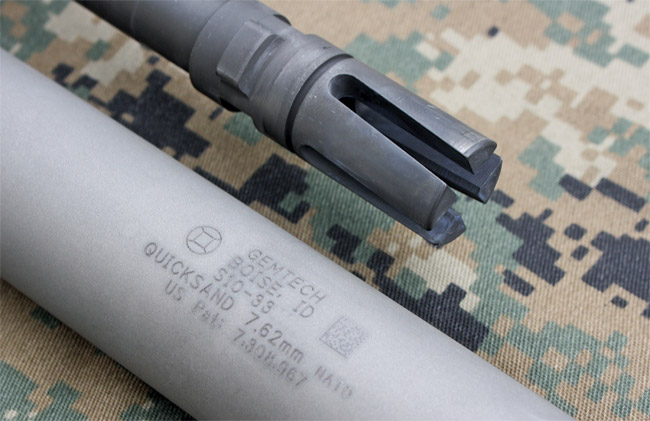 The lightweight Titanium Quicksand from Gemtech is a quick-detach sound suppressor for 7.62 NATO rounds. The male portion of the Bi-Lock mount pulls double duty as a Vortex-type flash hider and muzzle brake.

The new Gemtech Quicksand sound suppressor, now available for purchase, is used on 7.62 NATO rifles and utilizes a patented quick mount system.  It can be fastened securely in only two seconds and at only 17.5 ounces in weight it is the lightest quick-detach .308 suppressor available.

Modeled after the popular Gemtech Sandstorm, the Quicksand is manufactured to be as effective as it is light.  It also adds the feature of a Quick Mount.  Using an entirely new baffle design, just like the Sandstorm, the Quicksand sound suppressor is manufactured from corrosion resistant Titanium, providing a light package that is stronger than steel and tuned to maximum efficiency.  The lightweight construction is not only attractive when working in environments where extra ounces translate into a much heavier burden, but Titanium also cools much faster than many other materials and has far less impact on point-of-impact shift from changing barrel harmonics.

While one attractive feature of the Quick Mount is the speed and accuracy of the attachment method, it is equally interesting that it is “backwards compatible” with the older HVT and TPRS mounts and allows a duel-use with the G5 mount for use with the Gemtech 5.56mm series of silencers.  This gives the user a great amount of usefulness and continues to increase the versatility of the suppressor.

Live Fire
The base rifle chosen to test the Gemtech Quicksand was a DPMS LR-308.  This rifle is an accurate platform and has performed very well under numerous testing conditions.  The free-floating barrel of the test rifle is 16 inches in length, with an M4 profile.  The rifling rate is 1 turn in 10 inches.  The flattop upper receiver provides a suitable base for almost any mounting option.  The magazine design of the DPMS LR-308 rifle is based on the early, original ArmaLite magazine design, and this has been adopted by several other manufacturers including POF-USA.  There is a great selection of available magazines ranging in size from 5-rounds to 25-rounds and MAGPUL is even making a .308 version of their wildly popular PMAG in this design.

Ammunition being utilized in this testing included Lake City Special Ball and Wolf Performance Ammunition Gold.  Optics for this test would be an IOR Valdata fixed 4x scope.

After an initial sighting-in period, the first order of business was to collect muzzle velocity measurements.  This was repeated with each load – suppressed as well as unsuppressed – using the Vortex-style flash hider that is built into the Gemtech Quick Mount.  It is important to note that due to the design of the Quick Mount, the suppressor can only mount on a single way.  This is a great design step above earlier 3-lug mounts and some other commercial mounts that allow mounting in numerous positions.  Since the Quick Mount only allows mounting one way, the repeatability of critical shot placement when taking the suppressor off and remounting it is held to the highest standard possible.  As anyone who shoots an accurate rifle combined with a suppressor knows well, any variable, such as mounting the suppressor in a different position, has the potential to affect the point of impact greatly.  The design of the Gemtech Quick Mount takes this potential for error out of the equation with their design. 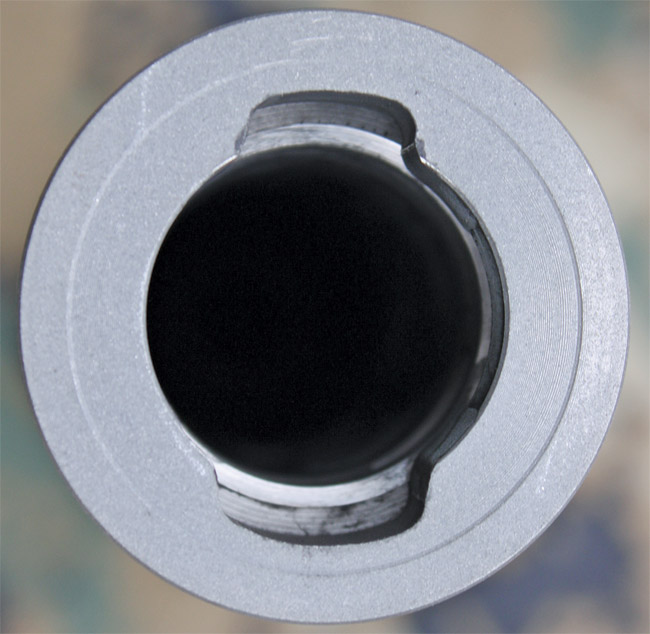 Since the lugs of the Quick Mount are different sizes, the Quicksand can only mount in one orientation. This provides a positive lock with no shifting or unlocking possible and allows for point of impact repeatability when removing and reinstalling the suppressor. There are no tools necessary and it takes less than 2 seconds to install or remove, with precise fitting.

The suppressor had a surprisingly low impact on the muzzle velocity (MV).  We conducted the majority of our tests with 150-grain SP Wolf Gold and 173-grain Lake City M118 Special Ball.  The complete information is included in the accompanying chart but in summary the average muzzle velocity from the 16-inch DPMS AP4 barrel with the Lake City was 2,496 feet per second (fps) unsuppressed and 2,500 fps suppressed.  The Wolf Gold averaged 2,680 fps with no suppressor and 2,668 through the Quicksand.  An interesting note may be the continuity of all ammo fired through the Quicksand Suppressor.  While the overall change was not significant, the extreme spread of all ammo was decreased greatly while the suppressor was in use.

The repeatability of the suppressor was tested with great results.  Testing was performed in the following manor; a string of 10 rounds was fired and the suppressor was removed.  This was followed by another string of 10 rounds and the suppressor reattached.  This was carried out 2 times per test so we would eventually end up with 4 groups of 10 rounds each.  The return to zero was absolute each time so it actually ended up being 2 groups of 20 rounds each, one suppressed and the other unsuppressed.  The deviation was a slight point of impact (POI) shift of approximately 2 inches at 100 yards, and repeatable.  The Lake City Special Ball ammo performed the best in the accuracy phase although the Wolf Gold was much more consistent in muzzle velocity.

An interesting side note on ammo selection is that the Wolf Gold ran well in the stock 16-inch unsuppressed configuration, but we experienced some trouble while using the suppressor.  A few rounds had trouble extracting and actually blew out primers.  No other ammunition in any configuration exhibited this activity.

Summary
The Gemtech Quicksand is a very desirable suppressor.  The extremely light weight of the 17.5-ounce system caused everyone who handled it to verify that it was actually a .308 can.  All shooters testing this combination had fired numerous 7.62 suppressors in the past and all were impressed with the feel and sound signature of the Quicksand as well.  The firearm no longer exhibits that “nose heavy” feeling common with many other sound suppressors, making initial and follow-up shots very fast, especially when engaging multiple targets.  Although Gemtech claims an average decibel reduction of 32Db, the “tone” of the Titanium suppressor seems “softer” to the ear.  This seems to be a standard observation as this writer recently tested the Gemtech 5.56x45mm TREK and TREK-T series sound suppressors and the same result was noted with the Titanium model in that caliber as well.  All ammo fired was traveling well over 2,400 feet per second at 8 feet from the muzzle and none was the least bit uncomfortable without hearing protection of any kind as it was well below the threshold of discomfort.

The Quick Mount mounting system is a big advantage for a number of reasons – the most obvious is in the performance.  Since it is a Bi-Lock system with 2 different size lugs there is only one way it can mount.  This is beneficial for repeated accuracy when mounting since it will always end up with the same orientation.  When the suppressor is attached it is pushed onto the mount, rotated and released.  It is under spring tension which applies pressure to the front when released giving it a positive position lock the operator can actually feel.  When locked in place it is not possible to shift or rotate; thus maintaining position for accuracy and retention.  In the rare occurrence when the suppressor is not desired for use, the mount doubles as an effective Vortex-style flash hider/muzzle brake.  Also, the threads are protected and never exposed at any time once the mount is secured. 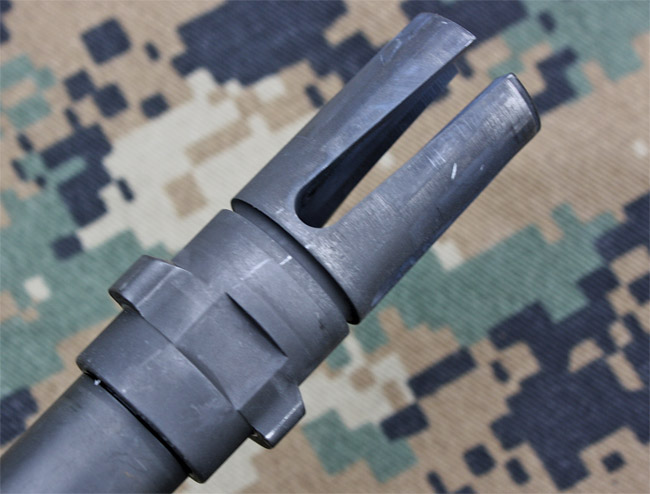 Close up of the Quick Mount illustrates the locking lugs below the Vortex-style flash hider / muzzle brake.

The ability to use the Quicksand with a Gemtech G5 mount allows the owner to utilize it on a 5.56x45mm (.223) platform when desired is a positive aspect as well.  While it has always been “possible” to use a 7.62mm suppressor on a 5.56mm platform, either the necessity of a thread adapter to fit, or the excessive size and weight of the 7.62mm designs didn’t make it “practical.”  The Quicksand provides a solution to both situations with the mounting system and light weight of the system.  The MSRP on the Quicksand is $1,400. 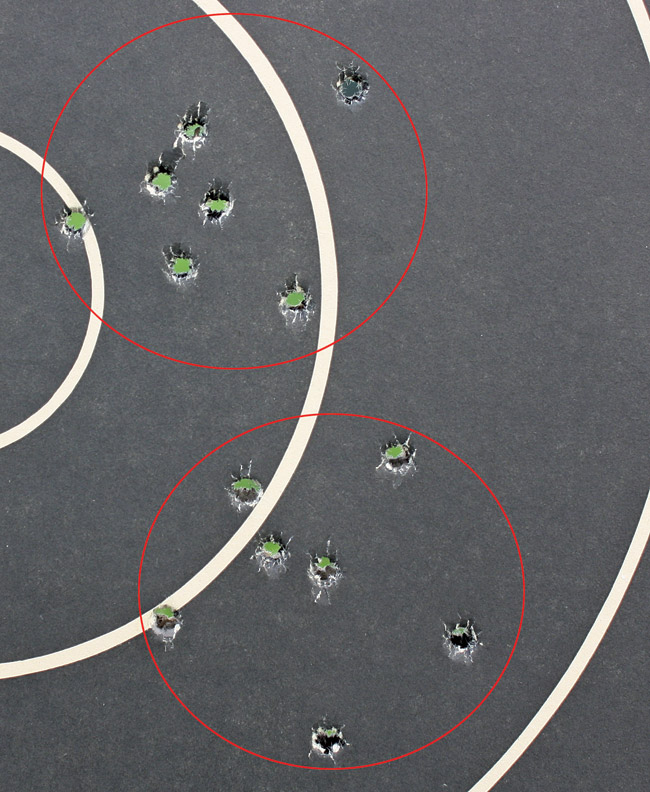 This photo illustrates the average point of impact (POI) shift at 100 yards using Lake City M118 Special Ball 7.62 NATO. Each circle represents 7 rounds fired. The top circle is suppressed and the bottom circle is unsuppressed. The light weight and design of the Quicksand silencer keep POI shift to a minimum. The Bi-Lock Quick Mount system makes it repeatable when removing and replacing the suppressor.