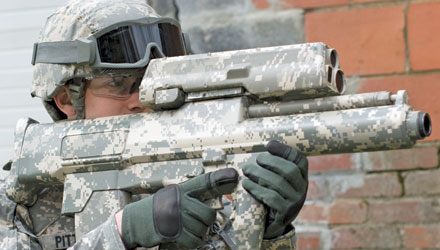 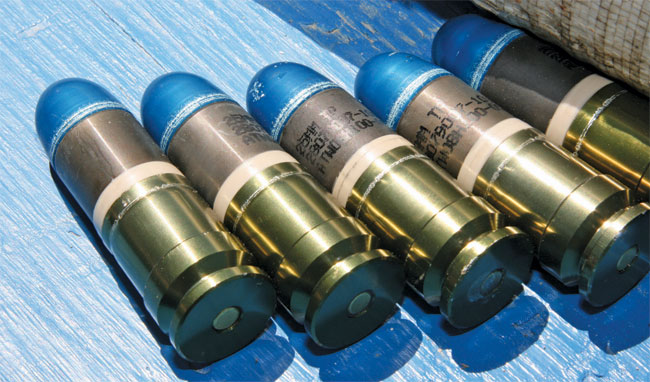 5 May 2010, Aberdeen Proving Ground, MD. Blue projectiles identify these 25mm rounds as TP (target practice) ammunition for the XM25. With smart computer chips but no high explosive filler, these are the cartridges that some lucky reporters got to fire. Current ammo in the family includes High Explosive and Armor Piercing. Less-than-lethal and door breaching rounds are in development. (Robert Bruce)

Optics enhancements are in the works, starting with dumping complicated Mil-Dot reticles in favor of with a modern stadia type offering rapid estimation by fitting targets within graduated ranging overlays.

The EXACTO program takes One Shot to the “smart munitions” level; maybe like a laser guided bomb for snipers.  It’s said to be a spotting scope-based target acquisition and guidance system that steers maneuverable .50 caliber projectiles directly to a target.

While SADJ doesn’t shy away from wondering if EXACTO will be a ballistic breakthrough or an expensive, dead-end boondoggle, PEO Soldier documentation predicts maturity of these technologies and transition to the field over the next four years.

XM2010
Long range precision shooters should take particular note of an exciting development unveiled by PMSW just before this article was completed.

5-round box magazine to make the system easier to load and reload with the additional option to change out ammunition quickly. 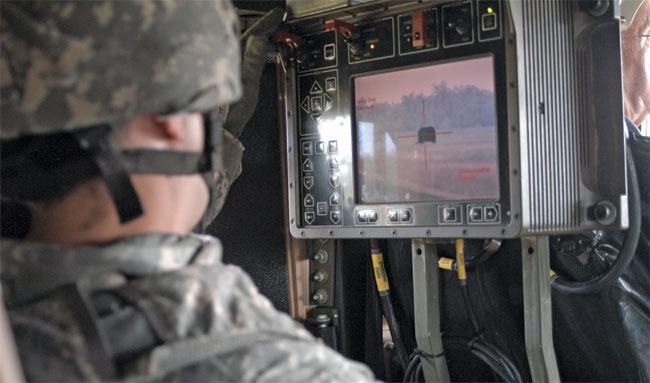 5 May 2010, Aberdeen Proving Ground, MD. Seated at a computer/monitor console safely inside an MRAP or other armored vehicle, the CROWS gunner identifies and engages targets with the aid of a video-linked forward-looking infrared sensor and laser rangefinder. The red crosshair on the screen provides a precise, computer generated aim point for first round hits. (PEO Soldier)

The upgrade is said to have received high marks from skilled shooters involved in testing and evaluation.

“The XM2010 had pinpoint precision,” said SFC Robert Roof, NCOIC/Chief Instructor, United States Army Sniper School.  “We were able to achieve shots well within the weapon’s capabilities both during limited visibility and during the day.  The optics were clear and easy to use and the ergonomics of the weapon made it very comfortable to shoot.”

Remington won the contract following competitive trials and is well positioned to supply as many as 3,600 of these upgraded M24s with the first to be fielded in 2011.

Better M4 and a Brand-New Carbine?
While bravely defending against decades of criticism over reliability and durability of the 1.1 million M16/M4 weapon systems currently fielded, PMSW acknowledges the desirability of even more “product improvements.”

PEO Soldier is currently pursuing a “dual path” strategy; continuously improving the half million M4 Carbines in the field while simultaneously conducting a search for a replacement.

M4 Gets More
The first path is the three phase improvement plan for the M4, adding to more than 60 refinements since its introduction:

1.  The Army will purchase 25,000 improved M4A1 Carbines with a heavier barrel for greater sustained rate of fire and fully automatic function in an ambidextrous fire control assembly (FCA).  A solicitation will be issued for kits to convert up to 65,000 in-service M4s to A1 configuration.

3.  Evaluate commercially available operating systems against the performance of the M4’s current gas impingement system.  It might even be an off-the-shelf piston kit. 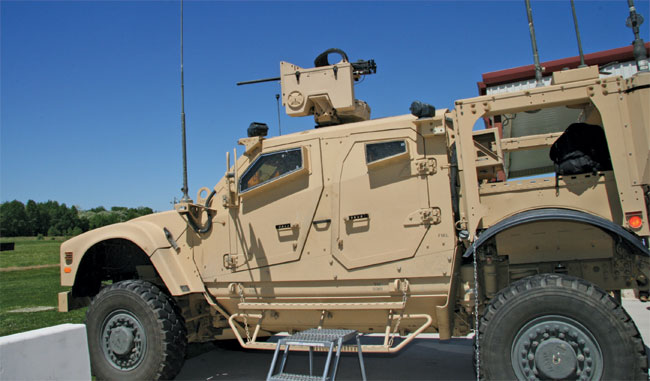 5 May 2010, Aberdeen Proving Ground, MD. Crewmen buttoned up inside this MRAP (Mine Resistant Ambush Protected) armored truck can shoot on the move in day, night and any weather without exposing themselves thanks to XM153 CROWS, the Common Remotely Operated Weapon Station, up top. This version has an M2HB .50 caliber machine gun with a flexible feed chute and plenty of rounds in the hopper. (Robert Bruce)

Carbine Competition
At the same time that M4A1 upgrades are underway, Secretary of the Army has ordered a “full and open competition” for a possible replacement.

There’s a new requirements document and money is in hand to search for a new carbine that can outperform the current M16 and M4 series weapon systems.

It’s supposed to have improved features such as fully ambidextrous controls, semi- and full-automatic fire, and accurate and reliable firepower.  In addition, integrated rails will accept accessories that currently attach to Mil-Std 1913 rails.

The new carbine will be capable of firing the family of U.S. Standard Type Classified rounds or nonstandard ammunition “with the same capabilities as the current 5.56mm family of ammunition.”  We hope that’s actually supposed to read “better” capabilities.

Bye-bye Beretta?
Although combat use of handguns by conventional forces is said to be “statistically insignificant,” the intensely personal preferences of those who pack standard issue pistols is not kind to those designs handicapped by 9mm FMJ ammo, decidedly lacking in lethality.

And in the U.S. Army since 1989, that’s the Beretta M9, an eminently serviceable semiautomatic that’s been unfairly maligned as unreliable due to stingy bureaucrats buying crappy magazines.

Credit Air Force Security for getting the latest handgun battle moving with the necessary validation from the Joint Requirements Oversight Council.

Plenty of commercial firms have been working on all this for many, many years so there should be no lack of contenders.  The timeline calls for trials and selection in FY11–12, completion of testing in FY13 and Type Classification expected in FY14.

Crew Served Weapons Future Initiatives
The American GI is a clever fellow and his natural admiration for the capabilities of vehicle mounted CROWS has led to urgent requests for a way to put these remote control rigs on top of guard towers.

The idea is to increase effectiveness by enabling them to conduct surveillance and engage threats from inside.  That’s right – from up in the CROWS nest.

Video and thermal surveillance cameras allow threat detection in all light and weather conditions and assist in accurate aiming of on-board M240B or M249 machine guns from elevated positions out to a range of 500-1,000 meters. 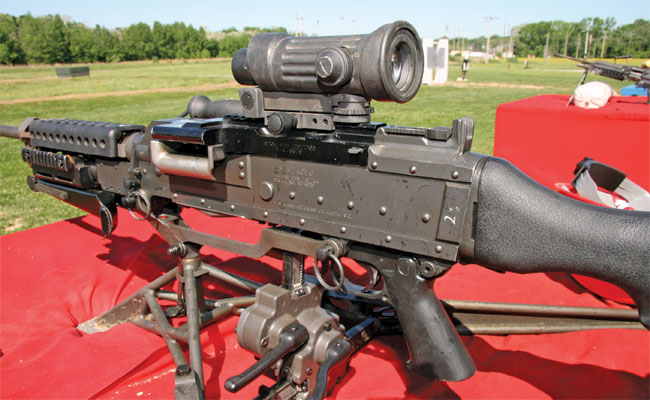 5 May 2010, Aberdeen Proving Ground, MD. A close look at the M240L’s receiver area shows its soldier-friendly accommodations for a variety of sighting options like the M145 MGO as well as the new M192 tripod with its fast-adjusting traversing and elevating mechanism featuring secure, easy clamp levers. Combat weight of this new lightened machine gun is about 5 pounds less than the current M240B. (Robert Bruce)

Ma Deuce on a Diet
The 90 year old “Ma Deuce” M2HB machine gun is getting a bit of modernization in the form of a Quick Change Barrel kit that speeds the process of swapping overheated barrels and eliminates the need for setting headspace and timing.  And she’s getting a serious new rival.

The XM806 Lightweight .50 Caliber Machine Gun is intended to deliver heavy machine gun punch at about half the weight of the M2HB, making it particularly attractive to special operations, as well as airborne, airmobile, mountain, and light infantry forces.

Other important advantages claimed for the gun include 60 percent reduced recoil, improved reliability, manual safety, and a quick-change barrel with no adjustment needed for headspace and timing.

Development has reached the point where initial fielding is projected for sometime in 2011.