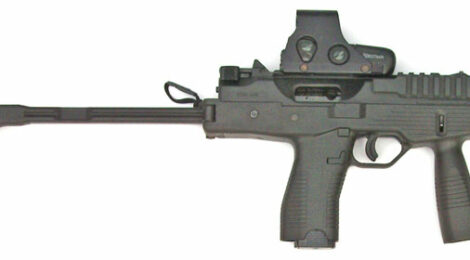 Personal Defense Weapons and their Ammunition 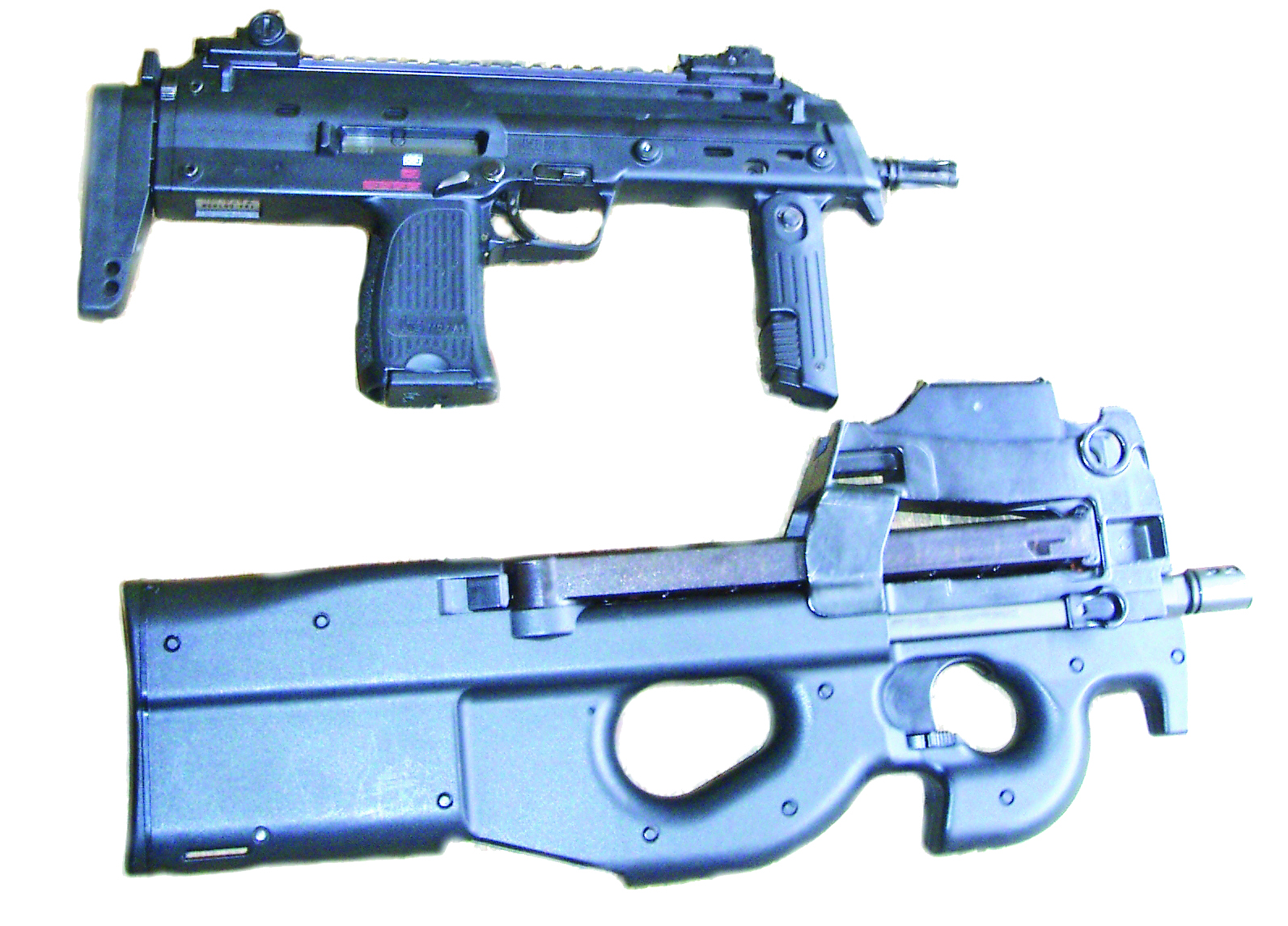 The main problem with the pistol as a military PDW can be summed up in two words: hit probability.  Even on the practice range, the maximum distance at which hits are likely to be scored is a small fraction of that of a carbine.  In the stress of combat, accuracy deteriorates much more rapidly than with other weapons, and it is often stated that few soldiers are hit by aimed pistol shots at ranges of more than a few feet.  While well-trained special forces can do a lot better than this, most PDW users will have little training or practice time with these weapons.

A carbine is much easier to shoot accurately, with the far more rigid three-point support of a shoulder stock and a forward handgrip as well as the pistol grip.  Sights are also easier to use.  The problem with carbines as PDWs is simply their size; they are not likely to be carried on the person unless danger is known to be imminent, and are more likely to be put somewhere out of the way while the soldier performs his primary task.  As attacks can come without warning, this can lead to the guns not being immediately to hand when needed.  There is also the risk of an “out of sight, out of mind” attitude, leading to the gun receiving little maintenance and performing (or not) accordingly.

Bullpup designs provide a much shorter overall length than traditional carbines, but even so they are no lighter and are generally too bulky to be carried conveniently when the soldier is engaged on other tasks.  Even the FN P90 bullpup, while a clever design, is no lighter than a basic M4 Carbine (5.6 lbs empty) and is much bulkier to carry than a folding-stock machine pistol like the MP7. 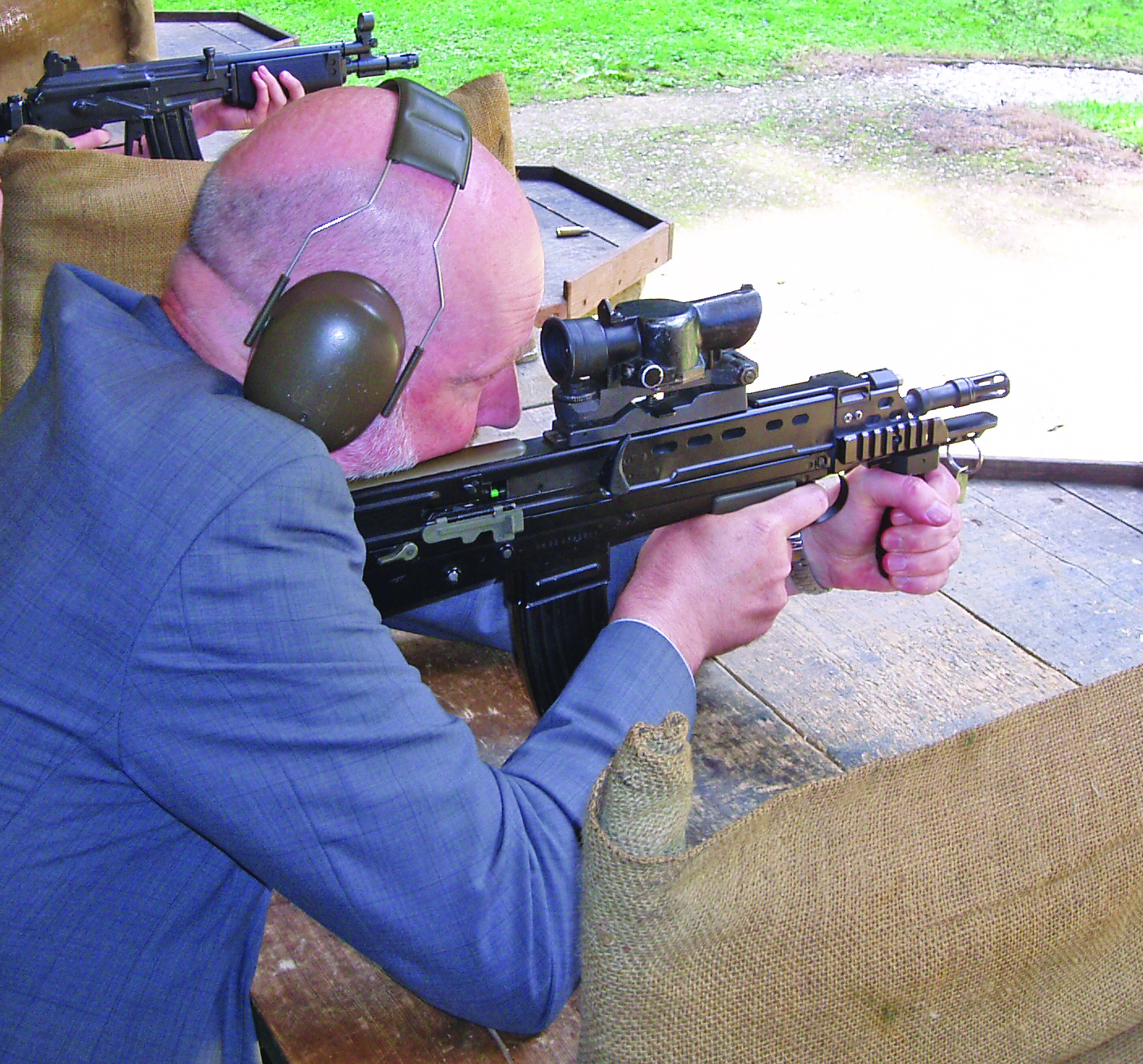 The author trying out the British Army’s L22A2 5.56mm bullpup carbine, which is very short but bulky and heavy.

One attempted solution to this problem is the KAC PDW.  The gun is smaller and lighter than the M4 Carbine, and its 6×35 ammunition (based on the 5.56mm case) is claimed to match its effectiveness out to 300 metres with significantly less muzzle blast and recoil.  However, it may still be considered too big to be routinely carried on the person, and it seems unlikely that an army would want to adopt another cartridge so close in performance to the 5.56mm, especially since the ammunition is also unsuited to use in a handgun.  Similar objections would apply to the 5.56×30 Colt MARS carbine of the late 1990s and the current Indian MINSAS carbine project, which also fires a 5.56×30 round.

Having discussed the disadvantages of traditional weapons, what kind of characteristics would an ideal PDW have?  There will be no agreed answer to this question, so what follows is just one personal viewpoint, based on many conflicting views studied over the years.

1. The PDW should be wearable, so that it is always immediately to hand when needed.  This means it must be compact and light enough to be holstered (or similarly attached) without getting in the way or being a burden to the wearer.  A weight of not more than 3.5 lbs (empty) seems a reasonable target.

2. It should have a shoulder stock and a forward handgrip to provide reasonable controllability and accuracy.  The needs of compactness dictate that these should fold or telescope out of the way while the weapon is not in use; the gun must therefore be usable as a single-handed pistol in an emergency if there is no time to extend the stock and grip.  In the past, some pistols have been offered with detachable stocks (which often doubled up as holsters) but these are really too cumbersome and slow to get into action, as well as not usually having a forward handgrip.

3. In the interests of compactness, the gun should use ammunition short enough for the magazine to fit into a pistol grip.

4. A very clear and easy-to use sight should be standard, preferably a red-dot zero-magnification holographic type.

5. The ammunition should be reasonably effective against both unprotected targets and those wearing (at least) soft body armor, but it isn’t realistic to expect a PDW round to match the performance of rifle ammunition.  The effective range probably doesn’t need to be more than 100 yards or so.

6. Finally, it would be useful for selective fire to be available for its suppressive effect when caught in an ambush. 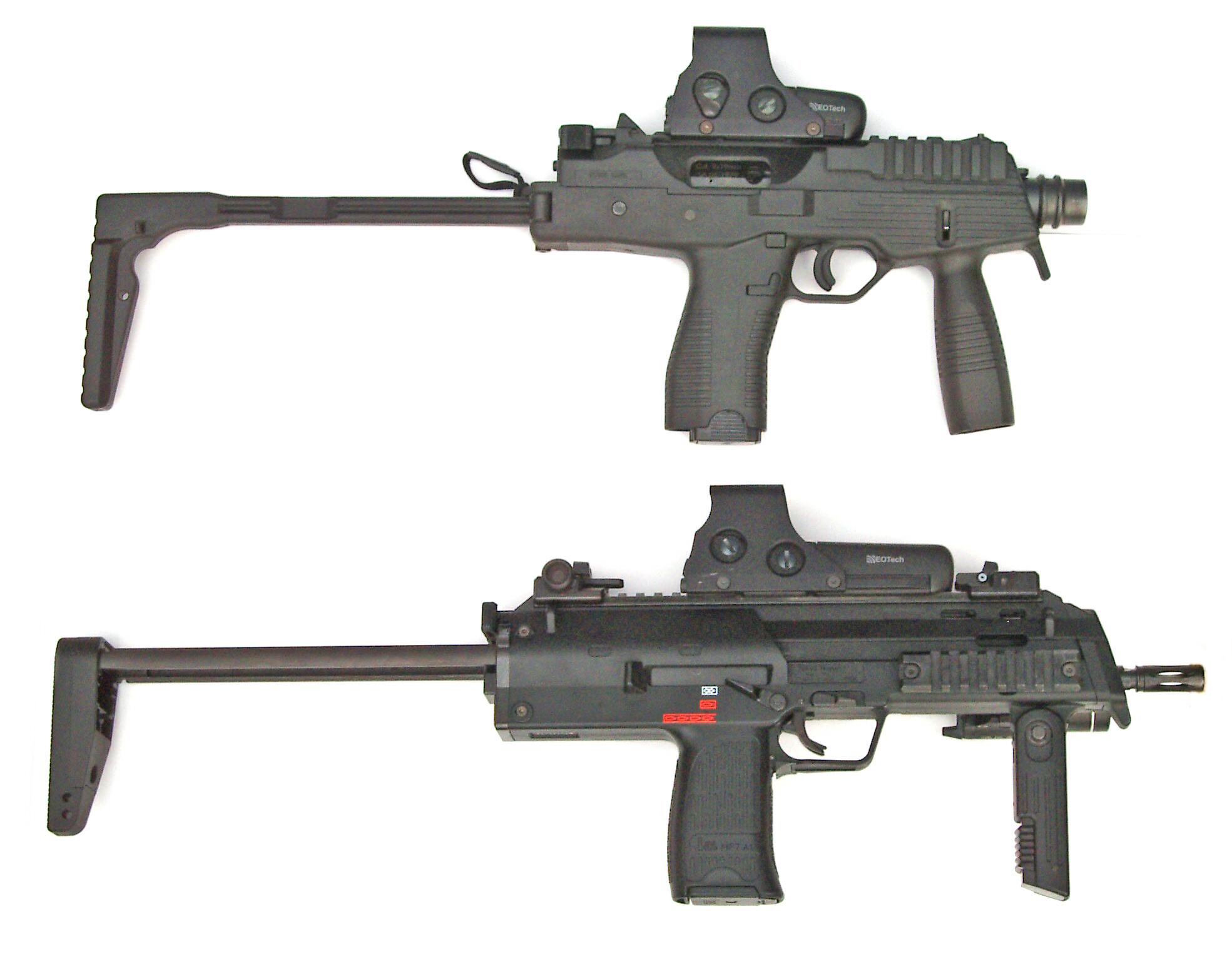 What is described here is clearly one of the modern breed of compact, lightweight SMGs or machine pistols.  There are several types available, but the key issue is ammunition choice.  Which is best suited to this role; traditional pistol ammunition or one of the new small-caliber high-velocity rounds like the 5.7mm and 4.6mm?

There is only one small-caliber gun in production which meets the above requirements: the HK MP7.  There is a slightly wider choice of compact 9mm weapons, the most notable ones being the Swiss Brugger & Thomet MP9 (developed from the Steyr TMP – Tactical Machine Pistol), which is a little smaller and lighter than the MP7 at 3.1 lbs rather than 3.3, and the new STK CPW (Compact Personal Weapon) from Singapore.  Russian firms have also introduced some machine pistols in this caliber recently, most notably the very compact PP-2000.

There is no doubt that the small-caliber rounds will penetrate more armor than traditional pistol ammunition, have a longer accurate range, are smaller and lighter so more rounds can be carried, and generate less recoil making them more controllable in automatic fire.  These are all important plus points.  However, against unprotected targets they seem likely to suffer from the same erratic effectiveness that afflicts the 5.56mm rifle round, only more so.

On the other hand, the effectiveness of the 9mm ball ammunition has also been questioned by US forces, with various attempts being made in recent years to open up competitions to replace the 9mm M9 with a .40 or .45 caliber pistol (the US Coast Guard has already adopted pistols in .40 S&W).  Despite the criticisms of the 9mm, it may not be quite dead yet, and 9mm guns have scope for upgrading their armor penetration. 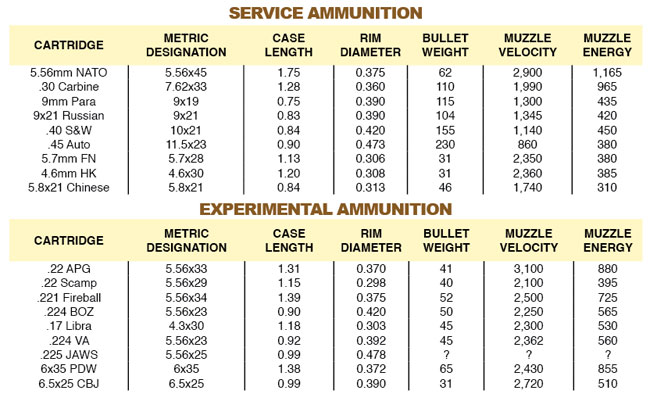 First, there are steel-cored armor piercing rounds for the 9mm which will get through soft body armor.  If more penetration is needed the Russian approach is worth studying; they have recently adopted the 9×19 as their standard PDW round to replace the old 9×18 Makarov, with a composite AP bullet that holds together against soft targets but separates on hitting armor, the steel core penetrating alone.  A high velocity is needed to achieve the penetration, which means that the bullets are light and will therefore lose velocity quickly, but they should be good enough for the required 100 yards.  Two different loadings have been developed: the 7N21 (80-grain bullet at 1,510 fps) and the high-pressure 7N31 (65-grains at 1,970 fps).  For those needing a longer effective range, a 9×21 round on similar principles is also in Russian service; the 7N29 loading fires a 104-grain bullet at 1,345 fps and is claimed to defeat armor consisting of two 1.2mm titanium plates and 30 layers of Kevlar at 50 meters.

Finally, it is possible, just by changing barrels, to switch from 9×19 to the experimental 6.5×25 CBJ, which in its standard loading fires a saboted tungsten alloy 4mm projectile weighing 31-grains at 2,720 fps from an eight-inch SMG barrel.  This outclasses the penetration of the 5.7mm and 4.6mm PDW rounds (and even the 5.56mm M855) and has an effective range of 400 meters, but clearly its performance against unprotected targets is questionable although the spoon-tipped bullet variant should enhance tumbling.

The main drawback of the 9mm compared with the 4.6mm is its heavier recoil and the effect of that on controllability in automatic fire.  Whether or not this is a significant issue would have to be tested in troop trials.  Guns in .40 or .45 calibers (such as the .45 KRISS Super V) could of course receive the same enhanced penetration treatment, with composite armor-piercing bullets and saboted sub-caliber rounds.  The downside is that the bigger cartridges reduce the magazine capacity and generate more recoil.

Any military weapon is a trade-off between conflicting requirements, and this is more true of PDWs than most.  They need to be compact, light and handy, but also to have a high hit probability in semi-skilled hands and to be effective against unprotected men as well as having the potential for penetrating some levels of body armor.  There is no correct answer to this conundrum, just a range of choices with different pros and cons.

Tags: 2009, Anthony G. Williams, PDW, Personal Defence Weapon, V1N1, Volume 1
← The White Eagle Military Museum // Skarżysko-Kamienna, Poland
Metal Storm Update →
Distributed at trade shows worldwide, Small Arms Defense Journal is a bimonthly publication that focuses on small arms, accessories, gear for the soldier, new products, industry news, and defense trade shows. The first issue of SADJ was Spring 2009, which launched at the LAAD show in Rio de Janeiro, Brazil. SADJ (pronounced “sage”) is targeted toward military, law enforcement, and defense industry professionals. Our job is to reach these groups and tailor content to their interests while producing a publication that is applicable to an international audience.