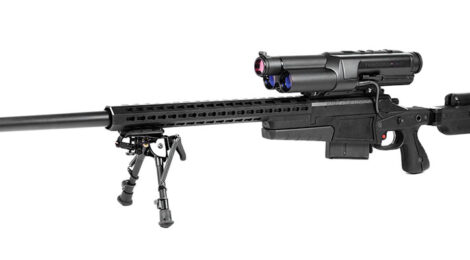 Advancements in optoelectronics is changing the firearms sighting device industry as we know it today and it is likewise changing society’s very perception. It’s no surprise that the optical industry is heading toward the ultimate replacement of traditional ground lens see-through glass optics with optoelectronic sighting devices. This sophisticated technology, like high definition multispectral cameras and viewing screens that offer reliable performance under all light extremes and environmental conditions, is becoming the norm.

Optoelectronics is the science and application of electronic devices that source, detect and control light and is considered, by many, a sub-field of photonics (the science of radiant energy). In this context, light includes visible light as well as invisible forms of radiation such as gamma rays, X-rays, ultraviolet and infrared. Optoelectronic devices are electrical-to-optical or optical-to-electrical transducers (devices that convert forms of energy), or instruments that use such devices in their operation. Electro-optics is often erroneously used as a synonym for optoelectronics, but electro-optics encompasses a much broader branch of physics that includes all interactions between light and electric fields, whether or not they form part of an electronic device.

Optoelectronics can be traced back to 1907 when a Londoner by the name of Henry Round discovered electroluminescence using silicon carbide and a cat whisker while experimenting with a turn-of-the-century crystal radio set. Uniquely, this very simple radio receiver’s only source of power comes solely from the power of radio waves received by a wire antenna. It gets its name from its most important component known as a crystal detector, originally made from a piece of crystalline mineral such as galena.

Galena is the naturally occurring ore of lead. Its crystals act as a semiconductor with a small bandgap of about 0.4 eV. In solid-state physics, a bandgap, also called an energy gap, defines an energy range in a solid where no electron states can exist. In graphs of the electronic band structure of solids, the bandgap generally refers to the energy difference (in electron volts expressed as eV) between the top of the valence band (the highest range of electron energies) and the bottom of the conduction band in insulators and semiconductors. Therefore, the bandgap is a major factor determining the electrical conductivity of a solid. Substances with large bandgaps are generally insulators; those with smaller band gaps are semiconductors, while conductors either have very small bandgaps (or none at all), because the valence and conduction bands overlap. 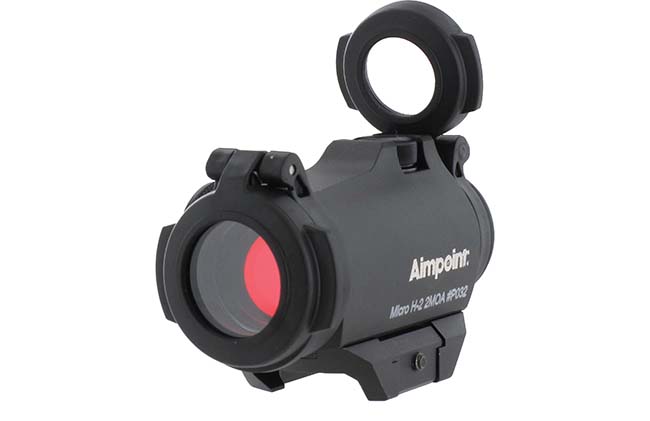 A close kin to Aimpoint’s optoelectronic Micro T-2 ruggedized military sight, the Micro H-2 provides sportsman much of the same affordable performance and user friendliness in the smallest package possible. Right: Trijicon’s MRO LED illuminated 2 MOA dot has 8 brightness settings (2 are for use with night vision) and a battery life of 5 yrs of continuous use at 70F. It’s military-grade rugged and water proof to a depth of 100 ft.

Galena crystal was used in early crystal radio sets as a point-contact diode capable of rectifying alternating voltages and current and detecting radio signals. The crystal was “tuned” with a sharp pointed wire, known as a “cat’s whisker.” The operation of the radio required that the point of the wire in contact with the galena crystal be shifted about the crystal’s faceted surfaces to find a part of the crystal that acted as a rectifying diode. Today the crystal and cat whisker have been eliminated. This component is called a diode and they are manufactured with specific semi-conductance purpose-intended values.

Now back to Henry Round’s research. In the 1920s, Round’s luminance investigation was further advanced by Russian physicist, Oleg Losev. Losev studied the phenomenal properties of light-emitting diodes (LED) in radio sets and published a number of detailed scientific papers that quantified and documented his findings. Even though one might think World War II would have inevitably advanced Losev’s research out of wartime necessity, it was largely forgotten until the late 1950s and history cannot account for the reason.

As chip technology advances, the next generation gun-sighting devices will undoubtedly incorporate navigation, ranging and spotting capabilities, a user heads-up display, an encrypted data recording capability, an encrypted data in motion link to any smart phone for real time social media-like or other communications connectivity and USB ports for uploading/downloading data. In the near future these devices might also include target acquisition and identification capabilities, electronic picture stabilization and a host of other wiz bang effectiveness options. They will be cheaper to manufacture than traditional glass optics, smaller and lighter, more rugged with a longer life expectancy, and provide down-loadable upgradeable capability option apps all in one optoelectronic-packed multipurpose sight. Imagination is the limit, and remarkably all this technology currently exists.

So why aren’t manufacturers offering the ultimate gun sight that includes all this technology? The answer is simple. When market requirement demands can be met with a competitive cost for the functions delivered, they will be. Manufacturers are slowly adding optoelectronic capabilities to their product lines, however with the addition of sophisticated technology comes the problem of user interface, training and familiarity. The analogy is similar to problems designers faced when teaching pilots to fly a drone. The engineers quickly realized that it was easier to train a computer game player to fly a drone using a game-like hand paddle and joystick than by using something that simulated an aircraft cockpit. The reason was user familiarity (muscle memory). Most of today’s generation grows up playing computer games and they are at home with the gaming controls that all work very similarly. Thus, the transition to drone piloting using similar functioning game-like controls is easy.

That is exactly the problem the optoelectronic gun sight design engineers now face. They must design an electronic sight with controls that closely mimic something that the users are at home with and already know how to use. Like the drone controllers, the gun sight controls must look, work and feel much the same no matter what brand they carry. This is achievable and we will see it transpire within the decade.

Like most things that appear almost too good to be true there is also an optoelectronic downside and, in this case, that involves one of the Laws of Physics. As capability becomes greater in optoelectronic devices so does the power requirement. Today’s batteries have insufficient life span to meet most future operational requirements requiring their frequent replacement or tethering the device to either a battery charger or an alternate power generation source. New sources of power will need to be developed and they cannot be cost prohibitive. Power generation strategies like power harvesting generated from human movement may be a partial solution (much like a self-winding watch), as may Uranium-powered batteries (recently patented).

With more power and prolonged use, adequate dissipation of the heat generated by the electrical components (known as heat sinking) becomes a major problem. This physical-limiting problem results from the fact that the microcircuit size limit has been reached. Today’s components’ feature size is measured in layers of atoms. The rigid Law of Physics at play is Arrhenius’ Law. Most optoelectronic devices (and many other manufactured electronic goods) fail because of internal chip material migration resulting from overheating. Within the chips, all the Ps (P-type dopants are electron acceptors) and Ns (N-type dopants are electron donors) migrate into one another and the transistors cease to function as designed. Arrhenius tells us that for every 10 degrees Centigrade temperature elevation, the migration rate doubles. In this regard, optoelectronic sights are no different than laptops or flat panel video displays. Microcircuit chip components like transistors; diodes, resistors and capacitors change value when overheated. When circuit components change value, electronic devices malfunction or outright fail. While engineers are not out of ideas and have hypothetical solutions to resolve such problems, they quickly bump up against the limitations imposed by the Laws of Physics – at some point something can be made no smaller and that physical limitation has been reached in today’s component circuitry. 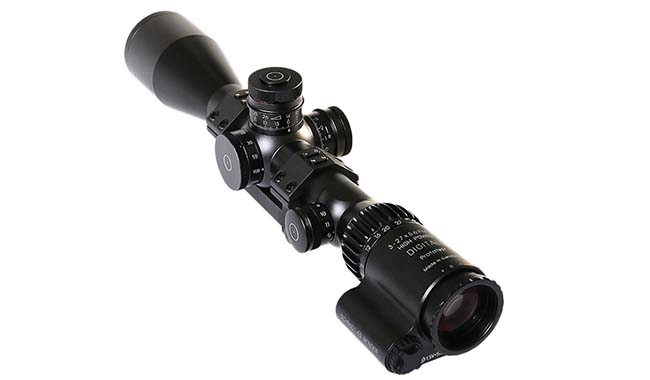 Nonetheless, there are a variety of optoelectronic devices available to the shooter today. Most range in price from several hundred dollars on the low end to many thousands of dollars for those offering greater sophistication and capability. Best of all, most major shooting sports suppliers offer a wide selection, as does the Internet. Today’s exponential explosion in semi-conductor technology coupled with better understandings of the quantum mechanics involved means the best available today will be quickly eclipsed by radically more capable next generation optoelectronic technology tomorrow.

As history reflects, the optoelectronic development road extending from the first transistor to the device technology in today’s iPhone 6 has been exponentially more complex (and more costly), but very quickly accomplished, in comparative terms. Optoelectronic gun sights don’t enjoy the commodity status of cell phones and iPads so for now, recovering development investments results in expensive end cost products. As with most technology evolutions, it will likely take longer to materialize than forecast, but when it does happen, the impact will be bigger than anticipated. Stay tuned.