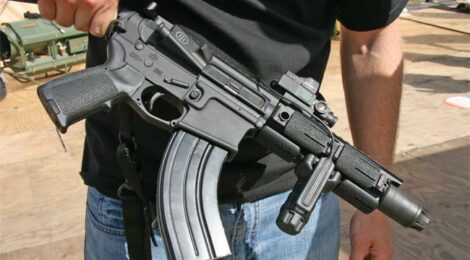 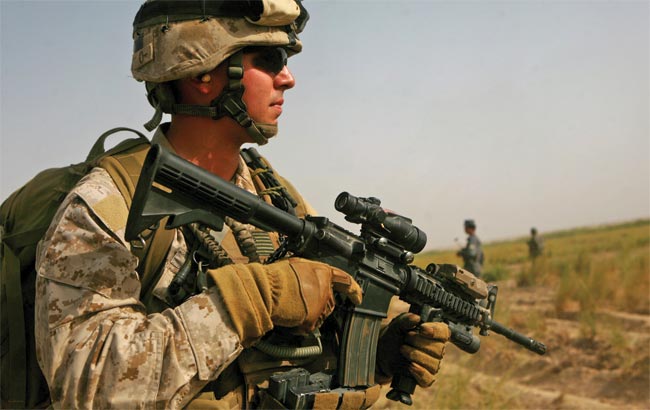 8 July 2009, Afghanistan. First Lieutenant George Saenz, along with two members of the Afghan National Police, provides security during operations in Helmand Province. His M4 carbine is equipped with a variety of COTS (commercial off-the-shelf) accessories that have been identified and fielded by dedicated efforts of Marine Corps Combat Development Command’s Marine Enhancement Program. (USMC photo by Corporal Aaron Rooks)

“To the many vendors, suppliers and equipment manufacturers, it is my pleasure to extend gratitude for your continuing faith in the Corps, for the patience, diligence and creativity of the industrial base that plays such a vital role in making and equipping the Marines.” – General James T. Conway, Commandant of the Marine Corps

General Conway’s appreciation for the value of this mega military show as a way of increasing efficiency of his Corps is amply reinforced by its inclusion as an officially sanctioned training event that all Marines are encouraged to attend.

Sponsored by the formidable Marine Corps League, the 29th annual MDM Expo kicked off on September 29th in a decidedly posh tent city erected on the Parade Deck (known to non-Marines as the front lawn) of Lejeune Hall, the imposing headquarters building aboard Marine Corps Base Quantico.  Over a three day period an estimated ten thousand visitors encountered more than 680 vendors showing the very latest items intended to maximize Marine Corps Expeditionary Warfare capabilities now and in the near future. 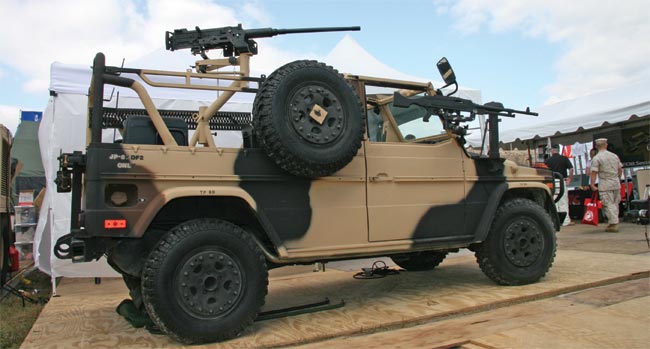 This G-Wagon Interim Fast Attack Vehicle from Advanced Vehicle Systems is well armed with an M2HB .50 caliber machine gun on the Heavy Weapons Pedestal with Offset Arm on the load bed and a passenger side 7.62mm M240 on a swinging mount. www.advancedvehiclesystems.com

While most of the firms are home-grown with familiar names like General Dynamics and Lockheed Martin, special exhibition groups featured products from our British and Australian allies.  The Corps itself was exceptionally well represented with impressive presentations by the Warfighting Laboratory, Embassy Security Group, Logistics Command, and Systems Command.

Items on display ranged from deadly-serious innovations by the Joint IED Defeat Organization, to the latest selection of commercial snack items being included in military ration packets.  Inside and outside spaces showcased “smart“ munitions, up-armored vehicles, artillery, small arms, training aids, computer hardware and software, and super-sophisticated sighting systems.  A Robotics Rodeo demonstrated the rapidly increasing capabilities of a wide range of recon robots to negotiate obstacles and perform exacting tasks in urban and rural settings.

Marine Aviation
Also notable this year was a special Expeditionary Force Aviation Pavilion, emphasizing ongoing efforts at modernization of the Corps’ Air Combat Element for its key role in current operations.  Transitioning some thirteen “legacy” aircraft, including fixed and rotary wing types, is a particularly daunting task that faces Marine planners and industry suppliers.  In honor of the proud and colorful history of Marine Corps aviation, there was a time line of displays leading from the earliest days of fixed wing flight to informed speculation on what the future holds. 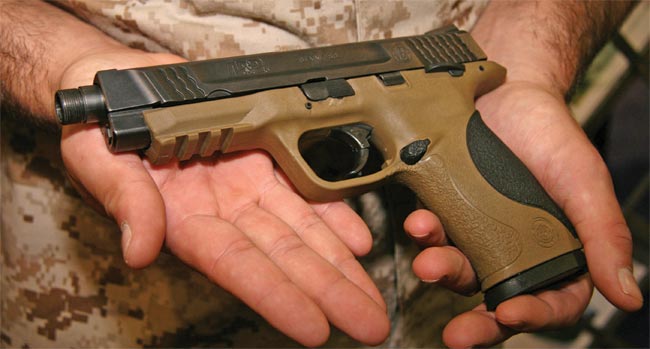 David Holt, VP for military programs at Smith & Wesson, told us that the threaded barrel on this S&W M&P .45 ACP is from a one-time-only batch produced as a favor to an unnamed entity. www.smith-wesson.com

High Level Briefings
Two invitation-only events at MDM are vital to those on the Marine side with the responsibility of identifying and presenting critical needs and those on the industry side seeking to meet these requirements.  The Report to Industry, conducted by Marine general officers, covers the big picture of research, development, testing, and acquisition.  This is followed by Exhibitor Meetings by managers from Marine Corps Systems Command Program Group.

2010
The 30th annual Modern Day Marine Expo is scheduled for 28-30 September 2010 at MCB, Quantico, Virginia.  This is the largest of three related shows where exhibitors meet the Marines on their own turf. 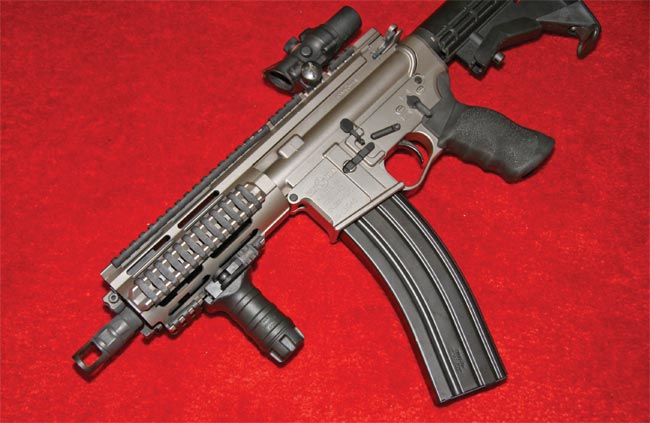 A close look at Patriot Ordnance Factory’s prototype 5.56mm PDW. A little brother to the firm’s P-308, the new mini carbine features distinctive NP3 coating on the upper and lower receivers as well as a stubby barrel tipped by a muzzle brake. The 40-round magazine is a nice touch. www.pof-usa.com

Marine West Expo, slated for 27-28 January 2010 at Camp Pendleton, CA, and Marine South, 21-22 April 2010 at Camp Lejeune, NC, are held at home installations for two of the Marine Corps’ expeditionary forces, which are continually training and dispatching fighting elements to a broad spectrum of missions – in the air, on land, and at sea – around the world.

Exhibitors at the Marine Military Expos meet and exchange information, face-to-face, with not only the users of their equipment but also the men and women responsible for equipping the Corps, which is rapidly expanding to meet a broad range of existing and emerging demands.  By the end of fiscal year 2010, the Marine Corps will have seen an increase of 10 percent more Marines than were in service in 2008.

At the same time, funding for equipment modernization programs is growing to meet the far-reaching, high-tempo operations in which Marines are engaged on a daily basis.  Those modernization steps are made from both Marine Corps and Navy budgets, and are based not only on the current demands of combat in Iraq and Afghanistan but also existing and developing threats in other regions. 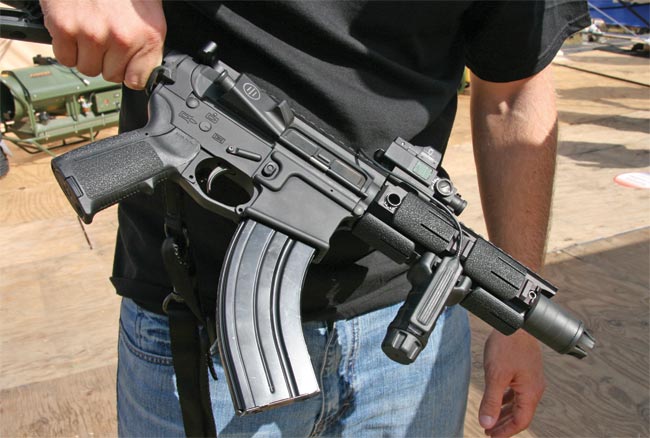 The decision-makers and procurement experts the exhibitors want and need to meet attend the expos for up-close and personal exposure to the leading-edge equipment, systems and services – solutions – their Marines need for the years ahead.  At the Marine Military Expos, networking opportunities among the buyers, the users and defense industry professionals are unlimited.  Take advantage of those opportunities for your company by exhibiting at the Marine Military Expos:  www.marinemilitaryexpos.com 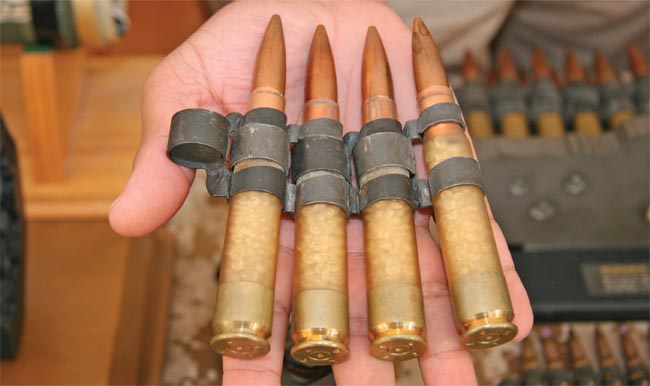 MARCORSYSCOM’s Program Manager for Ammunition is looking at polymer cased .50 caliber ammunition as one possible solution to weight reduction for improved logistical support. www.marcorsyscom.usmc.mil (all photos by Robert Bruce)