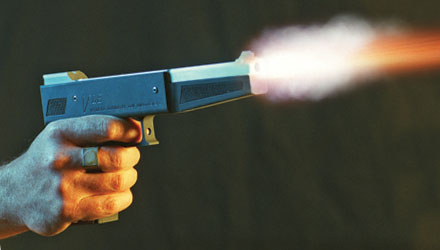 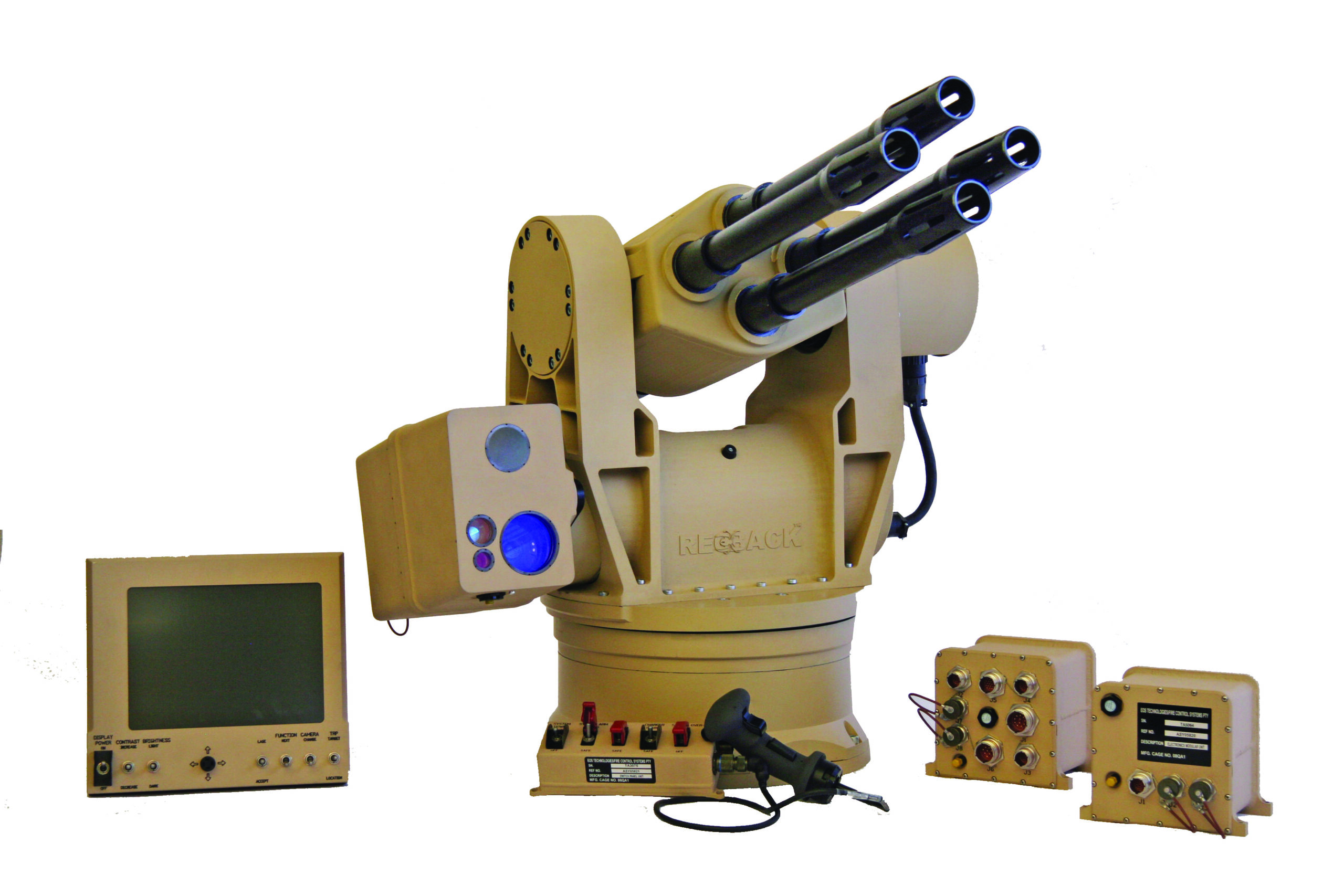 Multi-Barrel Versatility
Uncle Sam has fielded a wide range of remote controlled weapon mounts suitable for use on vehicles big and small for land, sea and air operations.  Their common characteristic is undesirably heavy weight due to the requirement for supporting large and energetically recoiling traditional mechanical guns like the massive .50 cal. M2HB and 40mm MK19.

Metal Storm offers a compelling alternative in Redback, a 4 barrel cluster with advanced fire control and automatic target tracking as an ultra-smart remotely operated weapons system (ROWS).  Produced in cooperation with STK and Electro Optical Systems (EOS), it consists of a lightweight gimbal, mount and weapon, weighing approximately 150 pounds.  It includes a combat proven fire control system that has thermal and imaging sensors as well as a laser rangefinder with a 5,000 meter range.

Considerable weight is saved in mounts and the overall system because the MS concept eliminates the bulky housings and complicated mechanical apparatus needed for feeding, extraction and ejection.  Additionally, a simple and effective coiled spring around each barrel and built in shock piston systems efficiently counters recoil. 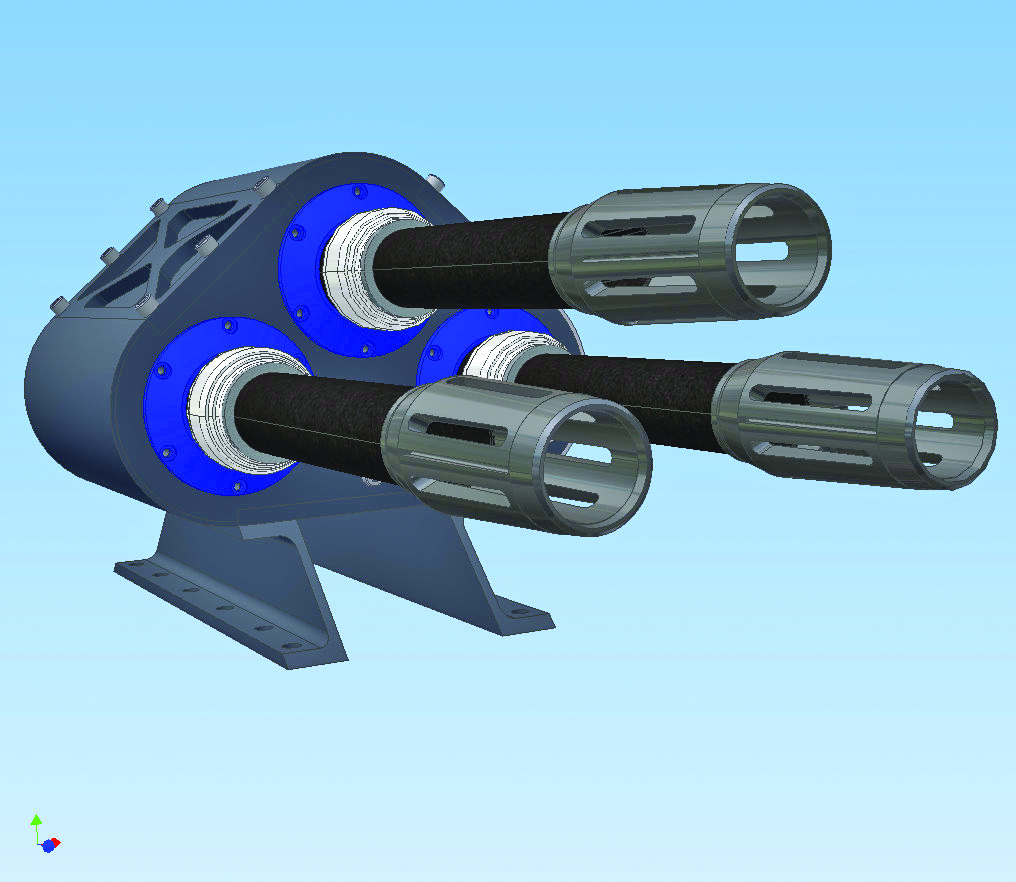 This computer generated engineering graphic shows how a trio of Metal Storm’s versatile and modular GLL4042 barrels can be mounted for a specialized application. Any number of these in various calibers and loadings can be grouped to perform a variety of missions. (Courtesy of Metal Storm)

And most dramatically, Redback has shown the capability to intercept rocket propelled grenades using STK’s COTS (commercial off-the-shelf) 40mm airburst munitions.  It automatically tracks and registers targets, slewing at speeds up to 700 deg/sec and can acquire and fire at 3 targets in approximately 1.2 seconds, selecting the appropriate munition for each target.

A recently developed universal “tail” housing for its propellant load and primer makes nearly all existing low velocity 40mm projectiles suitable for use in Redback including high explosive, enhanced blast, air burst, and less lethal munitions.  This is an important logistical consideration for economy of manufacture and ammunition commonality.

Firepower can be precisely controlled to deliver one or more munition types to target simultaneously, with the operator able to choose both fire rate and ammo to provide an intense and accurate salvo of munitions.

David Pashen, Chief Engineer and Development Manager for Metal Storm’s Australian headquarters, tells us that the work done to date on Redback has been very successful.

“We’ve undertaken tests last year to prove the effect of our rounds on an RPG warhead,” Pashen said, “showing that our system was able to place and detonate two rounds alongside a simulated incoming RPG warhead in full flight.

“The next steps for Redback,” Pashen said, “will be responding to specific customer demands for the capability and the integration of sensors leading into the full automation of the system.”

FireStorm
The four barrel weapon cluster on Redback has given rise to FireStorm, a lighter, simpler and less expensive way to discharge various types of 40mm munitions, tailorable to the tactical situation.  As with Redback, electronic ignition of the stacked ammo allows variable firing rates from single shots to as high as 1,800 rpm per tube in recent testing.

FireStorm is said to have performed well in a recently-completed technology demonstration of a Mission Payload Module – Non-Lethal (MPM-NL), loaded with a selection of “less lethal” chemical and frangible ammunition newly developed by engineers at the Metal Storm US operation.  Given the challenges of firing stacks of these rounds without wrecking their fragile projectile cones, this is a remarkable accomplishment unto itself.

The MPM-NL experiment in crowd control was funded by US Marine Corps Systems Command, seeking a better way to handle large scale threats without resorting to deadly force.  Metal Storm officials expect to learn sometime in 2009 if contracts are to be awarded.

Battle ‘Bots
The relatively light and definitely fast-shooting FireStorm offers advantages that give it particular prominence in the fast-growing need for arming military and law enforcement robots.  Metal Storm weapon modules have been successfully fired aboard Foster-Miller’s TALON and, most recently, iRobot’s Warrior.

The US Navy’s ultra high tech SPAWAR (Space and Navy Warfare Systems Command) has recently evaluated a robot-riding FireStorm system for its “Anti-Personnel Unattended Weapons Pod” on its own unmanned ground vehicle (UGV).

Arthur Schatz, who’s been with Metal Storm from the very beginning and is now VP for Business Development of the US corporation, explained that the purpose of the project was to “show the capability to have robotic systems, networked through a central command post, and patrol a given perimeter for base, area, border or facility protection.”

Schatz, a retired US Navy Commander whose professional contacts had been invaluable in obtaining initial military funding for O’Dwyer’s radical concept, told us that this latest contract culminated in a successful demonstration of the system and – when funding comes available – follow-on work is anticipated. 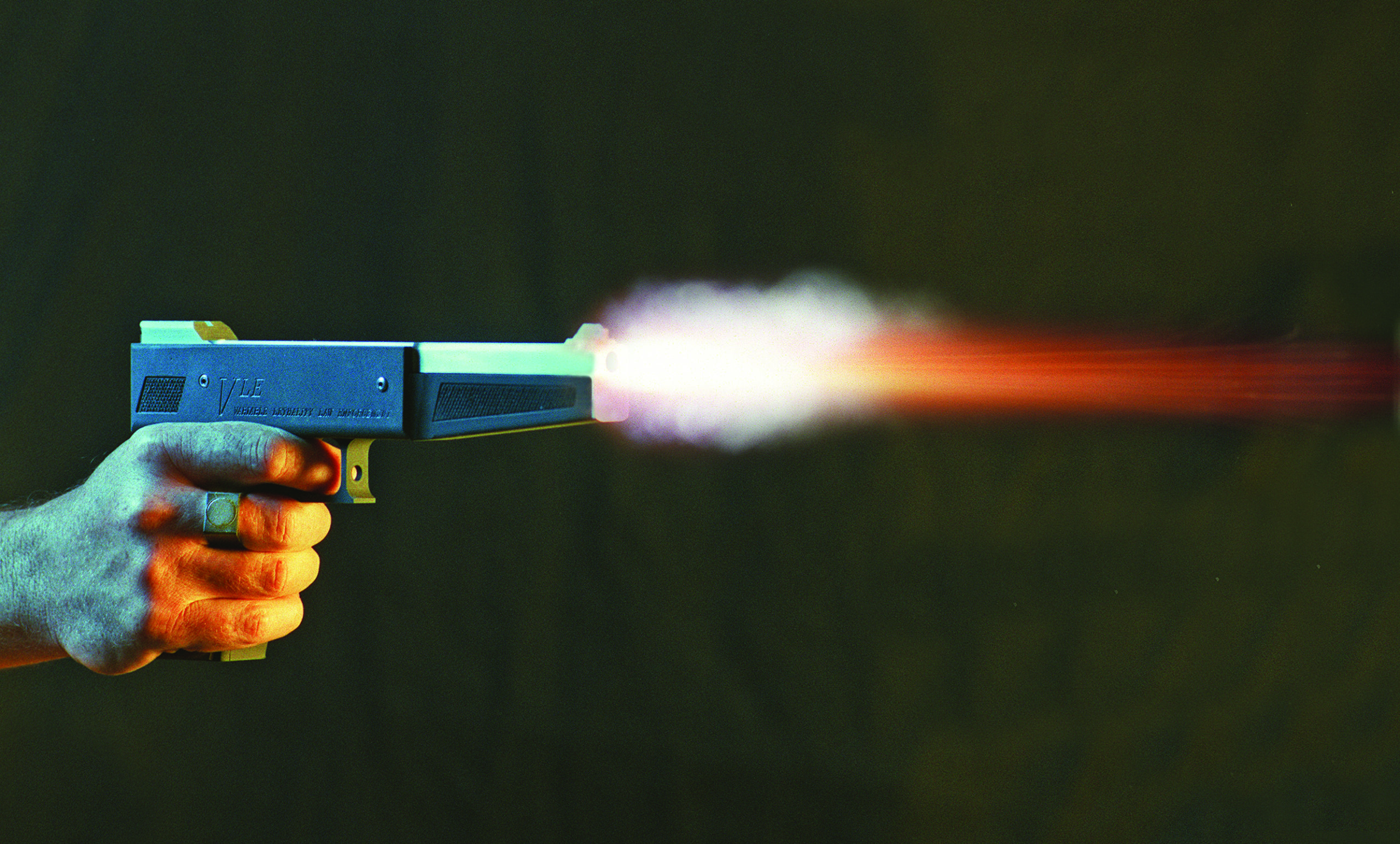 1999. This dramatic still photo captures the eruption of flame from a nearly instantaneous multishot burst of stacked projectiles from a prototype O’Dwyer VLe (Variable Lethality Law Enforcement) handgun. While the technology of this “smart gun” shows great promise, further development has been deferred for now in favor of other components of the Metal Storm system. (Courtesy of Metal Storm)

What’s Next?
Dr. Lee Finniear, CEO of the Australian Metal Storm Ltd, is predicting commercial success in the near future for MAUL, 3GL and FireStorm.  He also sees “a number of derivatives…we plan to expand our munitions to provide the suite of lethal and less lethal munition natures that customers expect.”

For the medium term, Finniear revealed that Metal Storm has no immediate plans to enter the arena now entirely dominated by traditional high velocity systems like the MK19 grenade machine gun.  “We are finding a niche in close-in to medium range weapons and have also invested heavily in less lethal applications of our weapons.”

All in the Family
Finniear has ambitious goals for the future of the Metal Storm system, particularly in view of the collaboration agreement with STK.  “Our development plan will provide the company with a family of low velocity weapons, a suite of supporting munitions, and an additional caliber in the 12 gauge MAUL weapon, he told us.  “This platform really adds value to Metal Storm as a company and provides the commercial base to deliver a much wider range of capability applications.”

Postscript
Credible news reports dating from 2006 reveal a pattern of energetic attempts by China to acquire Metal Storm’s technological secrets.  It is said that the Peoples Liberation Army has offered a bounty of as much as $100 million Australian dollars (about $68 million USD) for data packages.  O’Dwyer himself is reported to have emphatically rebuffed an invitation accompanied by a similar sum to live and work in Beijing.  There must be more to all this than just Roman Candles.

Find Out More
Metal Storm Limited has a particularly information-rich website with excellent photos and videos, plus detailed descriptions of its many products, technologies and capabilities:  www.metalstorm.com

Tags: 2009, Metal Storm Limited, Robert Bruce, V1N1, Volume 1
← Personal Defense Weapons and their Ammunition
Mr. Metal Storm →
Distributed at trade shows worldwide, Small Arms Defense Journal is a bimonthly publication that focuses on small arms, accessories, gear for the soldier, new products, industry news, and defense trade shows. The first issue of SADJ was Spring 2009, which launched at the LAAD show in Rio de Janeiro, Brazil. SADJ (pronounced “sage”) is targeted toward military, law enforcement, and defense industry professionals. Our job is to reach these groups and tailor content to their interests while producing a publication that is applicable to an international audience.