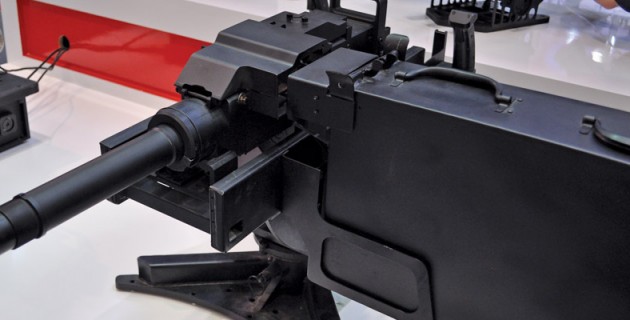 As a rising superpower, China has entered the arms trade show circuit since 2002.  The sixth Asia Pacific China Police show was held on May 22-25, 2012 in Beijing China.  Situated within the China National Convention Center, the show is located within the Olympic Park Complex.  The National Stadium (also known as the Bird’s Nest) and the National Aquatics Center (also known as the Water Cube) are within the same complex, and within close walking distance.

With more than 30,000 attendees and 300 exhibitors from 14 countries, the majority of exhibits are dedicated to police equipment.  There are few exhibitors displaying small arms, but the arms on display are like nothing ever seen in the West. Drum fed 35mm grenade launcher mounted on a tripod. Designated the QLZ10, the system fires standard Chinese 35x32mm HE and signaling grenades. Weighing in at 4 kilograms, the QLZ10 has a barrel length of 850mm, and a 6-round magazine capacity. The grenade launcher has a reported range of 250 meters.

The CBZ-95
The CBZ-95 battle rifle was on prominent display by the No. 208 Research Institute of China Ordnance Industries.  Chambered in 5.8x42mm and firing from a 30-round box magazine, there are three barrel lengths available.  A bullpup design, it was not possible to test the trigger pull or conduct a manual of arms to determine whether the rifle was ergonomic.  Nevertheless, Chinese Special Forces soldiers have utilized the rifle in international competitions, resulting in glowing reports of the rifle’s capabilities.

In addition, a sound suppressor with a claimed 30dB reduction was also on display.  Weighing .6 kilograms, 260mm in length, and 38mm in diameter, the suppressor was otherwise unremarkable. The LM12 – An Indigenous Chinese Minigun
A Chinese Minigun?  Yes, it’s true.  The Chinese are now making a Minigun.  Chambered in 7.62mm NATO, the system is electrically powered, with a claimed cyclic rate of 2,500 – 6,000 rounds per minute.  Links for the system were not on display.  As displayed, the ammunition box was located on the left side of the receiver, with the feed chute crossing over the top to feed from the right side of the receiver.

Powered by an external electric motor, the system looked simple, yet robust.  The motor engages an externally geared hub to directly engage the barrel cluster and spin the barrels during use.  In addition, the barrels have a wrench flat built into the exposed portion of the barrel to allow easy barrel removal and replacement.

There was no opportunity to fire the system, but promotional videos of the system demonstrated high rates of fire in extended bursts of fire. Left view of the LM12 Minigun. Note the feed chute from the left, feeding into the right side of the receiver. Detail of the barrel cluster. Note the geared hub, connected directly to the external motor. Also note the barrel flats machined into the barrels to allow easy removal and replacement.

Right side view of the LM12 Minigun.

The CS/LS2 9mm Submachine Gun
In a departure from indigenous cartridges, the CS/LS2 SMG is chambered in 9x19mm NATO.  Similar to the QBZ-95, the CS/LS2 is also a bullpup design, with some outward appearance to the Israeli Tavor-21 system.  Utilizing a 30-round box magazine, the system appears to fire from the closed bolt, and features an integral Picatinny rail for optics.  As displayed, the CS/LS2 was fitted with a sound suppressor.  No cyclic rate information or sound suppression figures were available.

A 3-barreled .50 Caliber Gatling?
Not on display, but prominently shown in the background of the printed materials provided was a three-barreled Gatling-type machine gun chambered in .50 BMG caliber (12.7×99).  No information was available about this firearm at the show, but the weapon was shown at the AAD show in South Africa. While having the appearance of the GAU-19 three-barreled .50 BMG caliber made by General Dynamics, it is as different from the GAU-19 as the Chinese “Minigun” is from an M134. The feed is entirely different. Less-Lethal Mania
Potentially due in part to the “police” focus, a large number of exhibitors displayed 38mm less lethal launchers and munitions.  Sophisticated in design, the launchers ranged from belt-fed 38mm systems similar to the U.S. Mk19 grenade launcher, the rotary drum Milkor-type design, as well as standalone single shot systems.  Of particular note was a belt fed automatic grenade launcher chambered in 38mm; the rounds on display were all less lethal in nature.  The belt fed 38mm automatic launcher, (nomenclature unknown) has a reported range of 50-300 meters, with a weight of 25 kilos and a claimed cyclic rate of 200 rounds per minute.

Model LR2 bolt action, 50-caliber rifle. Listed only as 12.7mm, it is unclear what type of .50 caliber round this rifle utilizes. Fitted with an 8x optic, the rifle has a claimed range of 1,500 meters, and weighs 9.8kilograms.

It appears that the Chinese arms industry has made a decided push to offer weapons in NATO calibers.  While the basis for this decision remains unclear, one can presume that this is to enhance export sales to international markets, or to allow Chinese soldiers to better integrate with foreign forces in integrated peace keeping type operations.

During the Beijing 2008 Olympic Games, the fourth floor was a site for fencing preliminaries and finals, Modern Pentathlon (fencing and shooting);and the exhibition space on the first floor is the International Broadcasting Center (IBC) and the Main Press Center (MPC).  The Paralympics used the ballroom section as the site for Wheelchair Fencing and Bocce.  The CNCC is 26 km away from the Beijing International Airport, proximately taking 30 minutes by car.  A public transportation system connects CNCC to the city center and various tourism attractions.  There are more than 30 hotels for all budgets within 5 km from CNCC providing about 10,000 rooms.

by Jason Wong on 25 February, 2013.
Tags: 2013, Asia Pacific China Police Expo 2012, Jason Wong, V5N1, Volume 5
← Mexican Drug War Fighters
Torture Test: U.S. Ordnance MAG-58/M240 →
Distributed at trade shows worldwide, Small Arms Defense Journal is a bimonthly publication that focuses on small arms, accessories, gear for the soldier, new products, industry news, and defense trade shows. The first issue of SADJ was Spring 2009, which launched at the LAAD show in Rio de Janeiro, Brazil. SADJ (pronounced “sage”) is targeted toward military, law enforcement, and defense industry professionals. Our job is to reach these groups and tailor content to their interests while producing a publication that is applicable to an international audience.