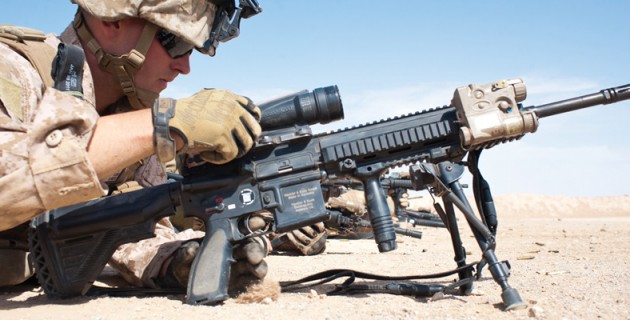 23 April 2012, MCB Camp Hansen, Okinawa, Japan. Lance Cpl. Zachary A. Whitman of III Marine Expeditionary Force, familiarizes himself with the M27 Infantry Automatic Rifle in preparation for the Australian Army Skill at Arms Meeting 2012. AASAM is a multilateral, multinational event allowing Marines to exchange skills tactics, techniques and procedures with members of the Australian Army, as well as other international militaries in friendly competition. SADJ was told that the Aussie’s – armed with the M249 – disallowed the M27 in some events. Sounds like quite a compliment to the HK’s accuracy and reliability…. (USMC photo by Sergeant Brandon Saunders)

In his response to a reporter‘s question at a 15 December ‘09 news briefing at the Pentagon, the top Marine referenced previously revealed criticism of the relative inaccuracy of the SAW in burst fire along with concern about losing that belt-fed light machine gun’s high volume of fire.  It was clear that this former muddy boots infantry officer was carefully considering implications of its replacement by an IAR:

“I got it that a SAW [Squad Assault Weapon] with a 200-round magazine is not perhaps terribly accurate shot to shot, but it’s a light machine gun.  Let’s step away from accuracy for a moment and talk about suppression.  And the psychology of a small-unit fight, that says that the other guy’s got a light machine gun and I’ve got an automatic rifle, I’m going to be hard pressed to get fire superiority over him; you know, to keep his head down instead of him keeping mine down, because that 200-round magazine just keeps on giving.

“Let’s talk about what it does to squad tactics and see how the troops feel about this thing, because you’re not only changing the kit, you’re changing the way, potentially, that we fight.  And with this new automatic rifle, every 30 rounds, you got to change magazines.  Well, you’re probably not going to do that, you know, in an exposed position.  You’re going to have to drop down, change that magazine and come back up again.  You know, fire superiority is fleeting.  And so I’m concerned about the sustained effects of all of that.

“I’m concerned that moving at night, that the other squad members carrying those additional magazines for that automatic rifleman might, in a spread formation, be hard pressed to get him what he needs in a timely fashion.  I mean, how are they going to do that?  Are they going to throw them over to where they think he is?  They’re going to be a little bit occupied themselves, I suspect, in a firefight.

“So there’s just some – and I don’t want to get so far down in the weeds that, you know, I’m doing lance corporal work here.  But it’s a big deal when you start changing how a Marine infantry squad fights.  And we’re going to treat it as a big deal.  And I’m going to have to be convinced that we’re making the right move before we start to purchase another system and change that whole dynamic.

“By the way, we also have to be able to justify to the Congress, and to you folks, arguably, that we’re moving away from a tried and true weapon system that the Army’s going to continue with, and yet we’re going to go another way.  And there’s another additional burden of proof here, I think, that has to be met simply because of the expense to the taxpayer.  So there’s a number of things out there that we’ve got to accomplish.”

‘MCOTEA’
In view of concerns up the leadership chain from Corporals to the Commandant, Clark explained that, beginning in December 2009, extensive operational testing of the HK IAR was carried out by a unique element of the Corps, specifically structured to yield objective data.

“That’s done by an independent,” Clark said, “Marine Corps Operational Test and Evaluation Activity – referred to as ‘MCOTEA.’  They don’t report to our ‘three star’ (Lieutenant General) and they don’t report to the ‘one star’ (Brigadier General) at Systems Command, they’re a separate entity that reports up to the Assistant Commandant.”

3 April 2009, Hawthorne Army Depot, Nevada. One of four finalists – two from Colt and one from FN – in the IAR competition, an HK candidate seen here gets a live fire workout from a Marine during what is termed a Limited User Evaluation. The LUE is designed to provide infantrymen some hands-on experience followed by the opportunity for direct input on likes and dislikes. Note the stubby GripPod mounted just forward of the magazine. While handy and useful on rifles and carbines, it didn’t make the cut for medium and long range accuracy in prone shooting. Beginning in 2008, Marine Corps Systems Command’s conducted verification testing on the four finalist IARs including reliability, rate of fire, environmental chambers, and user assessments. Environmental and drop tests were done at the Army’s Aberdeen Test Center. 20,000 round durability and reliability testing as well as sustained rate of fire testing at MCB Quantico. (MARCORSYSCOM)

“They’re a really good backstop for the Marine Corps,” he added, “to make sure that, while a system may technically meet the requirements, it also has to be operationally effective and operationally suitable in the hands of the Marines from the operating forces who are going to be employing this weapon system in combat.”

What the Commandant said at the December news briefing had apparently been said at staff level at least a couple of months earlier.  The March 2011 issue of Marine Corps Operational Test and Evaluation Activity’s MCOTEA Journal, proudly noted their quick response in supporting IAR testing:

“…in October 2009 MCOTEA received an urgent request, coordinated through Deputy Commandant, Combat Development & Integration, to compare the performance of Marine rifle squads equipped with combinations of the infantry automatic rifle, the squad automatic weapon (SAW), and the para-SAW.  On December 22, 2009, MCOTEA delivered its assessment report of squad performance to the Assistant Commandant of the Marine Corps.  In the intervening 85 days, MCOTEA put together a test team, prepared a test plan, gathered required resources, traveled to Twentynine Palms, executed the test in both day and night operations, and returned to Quantico….”

A dozen HK IARs went through the ‘MCOTEA’ wringer in the hands of infantry Marines running standard tactical scenarios at three separate locations with environmental conditions from cold to hot.  At the first of these, in the windblown sand and dust of the Mojave Desert at Twentynine Palms, California, squads equipped with SAWs were compared to others with IARs in realistic combat scenarios.

Cold weather operational reliability determinations were made in February 2010 in the snow at Ft. McCoy, Wisconsin, followed in June by hot/humid testing at the notoriously swampy Camp Shelby, Mississippi.

Engineering Tweak
We had heard that there may have been an engineering change arising from some of the trials.  Clark confirmed this as something that was observed in the variety of firing tests done from cold to hot temperatures.

“The cyclic rate in extreme heat was a little bit faster than we desired,” he said, citing concerns for reliability/durability over the long haul from stress on the gun‘s moving parts.  This was easily fixed with the minor engineering change of a small enlargement in the vent on the gas block, optimizing the cyclic rate across all operating environments.  It’s said that the M27 now tops out at about 900 rpm in the hot environment.

458 “low rate production” guns were ordered under the existing IDIQ contract.  The first group of these was ceremoniously delivered by HK – not coincidentally – on the Marine Corps’ 235th  Birthday,  10 November 2010. As HK began to deliver batches of rifles, four infantry battalions and one light armored recon battalion, all prepping for deployment to Afghanistan, each received in turn a full issue of IARs.  1st Battalion, 3rd Marine Regiment, Kaneohe Bay, Hawaii, was first to get a visit from Systems Command’s NETT – New Equipment Training Team – delivering 84 of the M27 rifles in December 2010 for a comprehensive, week-long program.  Classroom instruction was given to both armorers and operators; then the shooters would go out to the range for known-distance and combat marksmanship.  Both transitioning SAW gunners and new Automatic Riflemen got plenty of live fire with the new M27, building skills in full auto takedowns at close targets and long range accuracy in semi-auto.  Leaders got their own block of instruction on tactical employment considerations as well as the opportunity for live fire.

The decision was made to officially designate the new IAR the M27, honoring the 1st Marine Division’s 2nd Battalion, 7th Marine Regiment where then-CWO2 Eby was for the original IAR testing way back in 2001.

The New Commandant
General James F. Amos, who took over from Conway on 22 October 2010 as 35th Commandant of the Marine Corps, had apparently become a strong supporter of the new IAR.  In the Q&A following a presentation on 8 February, 2011, Amos spoke enthusiastically about his personal experience in firing the M27:

“We went out and fired it before Christmas and it is absolutely dead on:  500 meters – and a bullet out 500 meters is a long ways,” Amos said, drawing laughter by adding, “And that was from some old broken-down fighter pilot… even I could do it.”

While the formal decision to begin full rate M27 production was still several months away, Amos went on to say, “We are fielding that now on a test basis in Afghanistan with five battalions.  My sense is this weapon could take the place of our squad automatic weapon.”  He then tossed out a tantalizing tidbit; “And it could also take the place, possibly, of our service weapon: So yet to be seen.”

Reports from 1/3 and other user units, as well as the Corps’ highly influential Infantry Operational Advisory Group, were apparently positive enough to spur a decision on 23 May 2011, authorizing Full Fielding.  Commandant Amos’ decision, Clark said, was reached after collecting positive feedback from grunts.  Each of the five battalions in the Limited Fielding did an assessment of the M27 at the end of their pre-deployment training and, Clark said, there was “overwhelming support for full fielding.”

On 15 September 2011, HK announced to the world that the tentative $23.6 million IDIQ contract it had gotten back in December 2008 was finally going to be exercised for full rate “production, delivery and associated support of the Marine Corps’ Infantry Automatic Rifle (IAR).”

While the Corps’ internal decision to go ahead with full rate production had been publicly announced three months earlier, it apparently took that long to get all the procurement legalities in order.

“Then we go through some acquisition hoops to put guns on contract, obligate money and things like that,” Clark said.  “We had money programmed, waiting to execute based on completion of our testing and then the Limited User Evaluation.  The money was there and so authorization from senior leadership to proceed with full fielding enabled us to obligate those funds.”