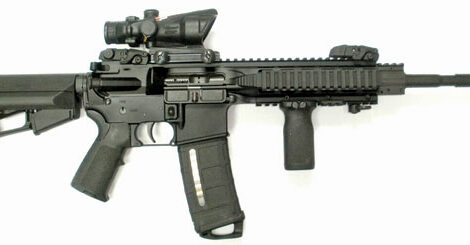 The name ArmaLite is synonymous with innovation and design excellence.  As the company started it was ahead of the rest of the industry bringing new aircraft age technology into the firearms industry.  Although the company has changed hands over the years, some things never change.  The current president, Mark Westrom, has kept the legacy going by developing new members of the AR-family of rifles as well as enhancing the AR-10 and AR-15 rifle systems.  The key to the survival and popularity of the AR-10 and AR-15 rifle systems is the rifle’s ability to adapt and evolve.  That makes it timeless; some say 50 years old, some say 50 years young and still evolving, making the best even better.

At SHOT Show 2010, Westrom and ArmaLite introduced a product that will surely enhance not only his own rifles but will give the customer the ability to have the benefits of a kit that will match the monolithic upper receiver to their favorite existing barrel.  Enter the ArmaLite SPR Mod 1.

The ArmaLite SPR Mod 1 is a collaboration between ArmaLite and Aero Precision, with Aero performing most of the design and tooling.  The ArmaLite SPR Mod 1 is a kit that contains a true one piece upper receiver manufactured from a single 7075 T6 aircraft aluminum forging.  Unique to the Mod 1, The Mil-Std 1913 rails at the 3, 6 and 9 o’clock positions are removable.  They can be replaced with a variety of rails.

The rifle tested in this article was equipped with the high speed Magpul accessories. These include the ACS stock, MIAD pistol grip, PMag magazine with Ranger floor plate, folding rear sight, folding front sight and vertical pistol grip. The optic chosen is the Trijicon 4x32mm ACOG.

What is unique about this system is that there are currently only three true monolithic upper receivers in the industry (ArmaLite, Colt, and LMT), but ArmaLite’s is the only one that allows installation of a barrel with a standard barrel extension.  Other systems, which claim to be monolithic, are actually two pieces welded together or held together by screws.

All that is required for a customer to convert their existing carbine to SPR Mod 1 configuration is removal of their existing front sight base, delta ring/barrel nut assembly, replacement with the provided barrel nut, and reattachment of the front sight base with the gas tube installed.  The ArmaLite SPR Mod 1 is universal.  As the product stands right now the ArmaLite SPR Mod 1 upper receiver will take alternate-caliber barrels including 6.8mm Rem SPC, 6.5 Grendel, .204 Ruger, 5.45x39mm and .50 Beauwolf to name a few.

The benefits of the long 12 o’clock rail are many.  One rail to attach optics, magnifiers and night vision with complete zero retention.  Free floating the barrel offers an excellent accuracy enhancement with better cooling characteristics.  All accessories are attached to the rail, not the barrel, and there is no chance of the barrel being bent from the downward pressure of a vertical pistol grip or upward pressure of a bipod.  The shape and size of the air vents on the upper assure that fingers cannot go through to the hot barrel. 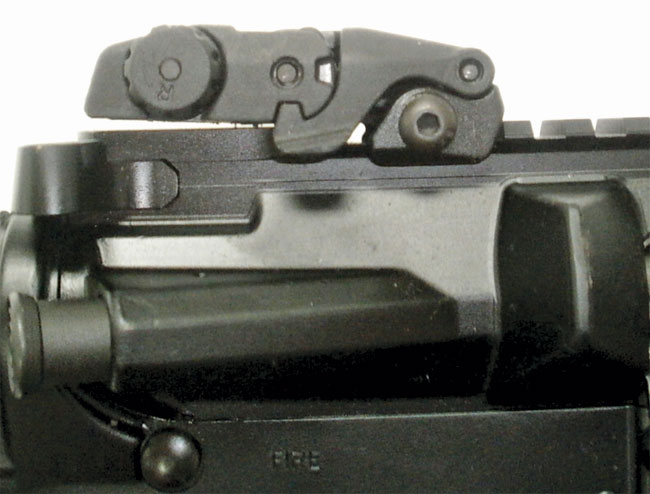 The Magpul folding backup sight is adjustable for windage only.

Built into the receiver is a fired cartridge case deflector as well as a forward assist.  All rails are numbered enabling optics and accessories to be repeatedly placed on the receiver at the same location to avoid rezeroing.

Parts interchangeability has been kept with the ArmaLite SPR Mod 1.  The upper receiver uses the same charging handle, bolt carrier group, forward assist assembly, ejection port dust cover assembly, gas tube, front sight bases and barrel extension as the standard M4 family of rifles.  Keeping these parts commonality will be the largest selling point over any other monolithic receiver on the market today.  No sharp edges and an excellent fit and finish is what we have come to expect from Westrom, and the Mod 1 provides it.

The Mod 1 kit includes: the upper receiver, barrel nut, Mil-Std 1913 rails, plain rails, torx wrench, screws as well as the barrel nut wrench.  Provided with the rail panels is one Mil-Std 1913 and one plain rail, which has a cut for a detachable sling swivel.  This enables the shooter to have a quick detach sling receptacle anywhere on the rail they wish.  The kit comes complete in a box along with instructions on how to assemble the barrel. 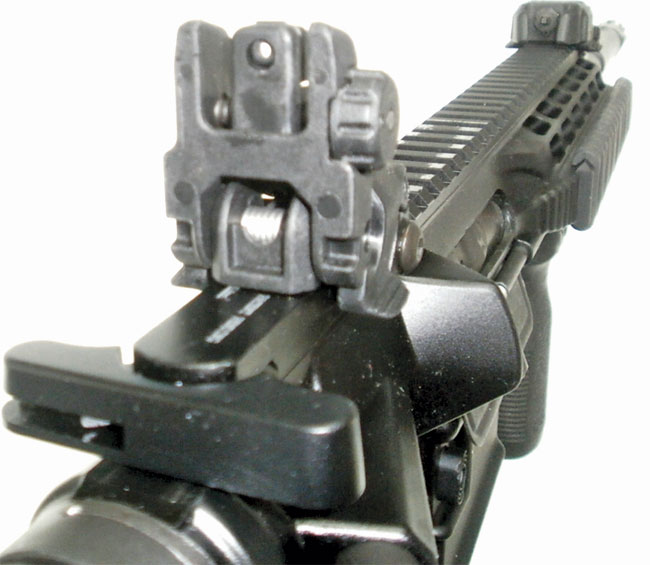 When engaged, the Magpul folding backup sight has both small and large apertures.

Last but not least, the SPR Mod 1 is offered is as a complete rifle.  Both the rifle and the kit were sent as T&E’s for this article.  The complete rifle came with a 16 inch, 1/7 inch chrome-moly-vanadium M4-profile chrome-plated barrel with compensator.  The lower receiver was a standard ArmaLite lower receiver with six-position telescopic stock and standard pistol grip and was equipped with ArmaLite’s trademark heavy bolt catch.

The trigger is superb; it is ArmaLite’s proprietary two stage trigger.  The first stage of ArmaLite’s trigger is very smooth and the second stage of the match-grade triggers break between 4.5 and 6 pounds.  The Tactical Match grade triggers focused on the law enforcement market weigh in at approximately 8 lbs.

New Magpul High Speed Accessories
Taken the opportunity to fire a new high speed rifle, some of the newest Magpul accessories were chosen to use on the ArmaLite SPR Mod 1.  Magpul has taken its rightful place in the industry as offering some of the finest accessories for the M16/M4-family of rifles in the world.  They are loved equally by commercial, law enforcement and military customers.  Magpul provides OEM for several companies whether it is the PMag or any of their high end stocks or other accessories.

The new ACS or Adaptive Combat Stock was used on the test rifle.  This new stock provides the stock has two removable battery compartments along with an integral storage compartment.  The stock comes with a .30 inch thick rubber butt pad.  The friction lock has a lock that prevents it from moving at an inopportune moment. 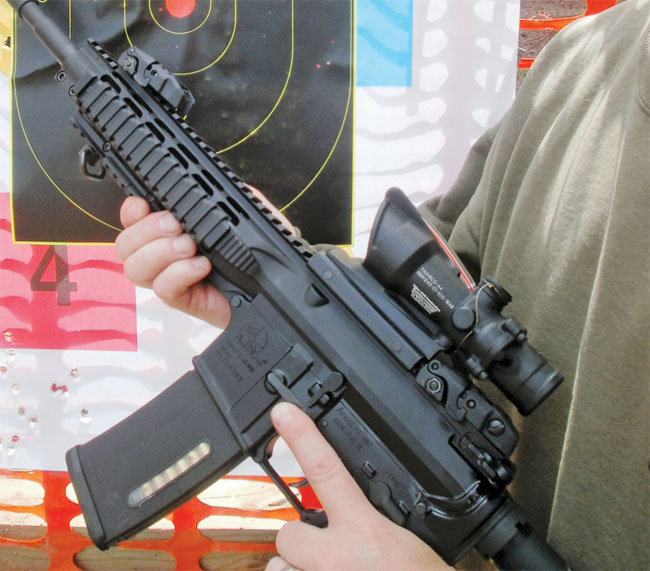 The MIAD or MIssion ADaptable grip replaced the standard A2-style pistol grip.  This is adaptable to the hand size of the shooter as both the front and backstrap are removable.  The back comes with three different sizes and the front can be had with and without the finger rest swell.  There is an internal storage compartment that can be bought separately in several configurations including battery storage, bolt/firing pin storage or spare ammo storage.  Of any pistol grip this author has tried, this is by far the most comfortable.

Every rifle must have back-up sights.  The new Magpul MBUS or Magpul Back-up Sight were chosen.  Both front and rear are provided by Magpul.  First, both have a lever to press for release.  But another feature built into the sight was in an emergency you may not have time to hit both levers.  By smacking the front of the sights with your hand they both engage.  The rear sight is adjustable for windage only and has a flip up small aperture and has a larger aperture.  The front has a standard front sight post which is adjusted with a tool or cartridge tip.

The RVG or Rail Vertical Grip debuted at the SHOT Show as well.  This is unique in two ways.  First, it is much shorter than the standard KAC grip.  Second, is that it comes with adapters so it can be mounted to a handguard without a rail.  The contour was very comfortable and easy to maneuver. 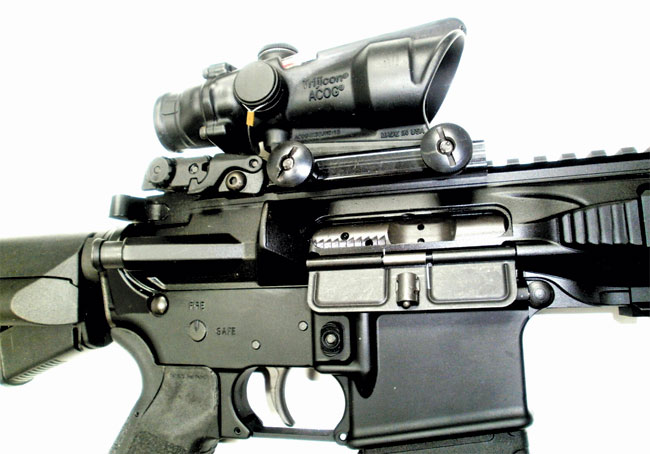 The rifle with the Trijicon ACOG scope and Magpul backup iron sight. Note the SPR Mod 1 has a fired cartridge case deflector and forward bolt assist.

The product that has really put Magpul on the map is their PMag.  The PMag is perhaps the finest magazine ever made for this platform of weapons.  The PMag is made of a proprietary polymer that is stronger than aluminum or steel – so much so as you can run these magazines over with a truck and they still work.  The magazine does not swell nor suffer from feed lip creep.  The magazine uses an anti-tilt follower with a constant curve construction so the cartridges stack in their normal curvature in the magazine.  The magazine can be had with and without a clear window with round reference numbers and an orange mark on the spring to let you know the ammo status of the magazines.  These magazines have been proving themselves in combat in both Iraq and Afghanistan.  Many foreign countries have adopted these magazines for their M4 rifles as well.

At The Range
The ArmaLite SPR Mod 1 was taken to the range on an 85 degree day and tested at 100 yards.  The optic chosen was the Trijicon ACOG (TA31RCO-M4CP).  This is a 4x scope with a tritium lamp as well as fiber optics.  The ACOG is ideal power for a combat rifle due to quick target acquisition.  An excessively high power telescopic sight has a narrow field of view that isn’t practical at typical short combat ranges.  This optic is standard issue for the U.S.  Marine Corps issue M4 carbines. 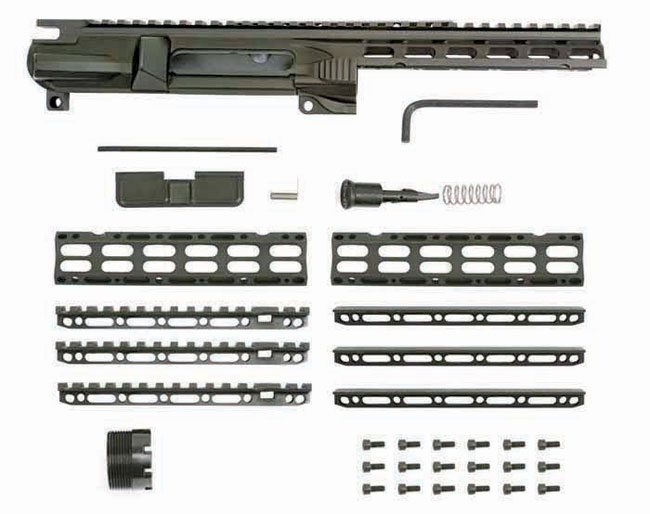 The complete SPR upper receiver stripped down to show the individual parts.

More than 500 rounds of SSA M193 were fired with no malfunctions of any sort.  Both PMags and C-Products stainless steel magazines were used in testing the rifle.  With the 77 grain ammunition, groups consistently hit around 1 to 1-1/2 inches.  This is extremely respectable for a combat grade chrome lined barrel: not to mention standard M4 profile and not a heavy barrel.

The SPR Mod 1 is an accurate, beautiful and extremely flexible rifle.  As increasing numbers enter the market you’ll find them offered with a variety of barrel lengths, materials, calibers, and weights to satisfy the customers requiring an accurate and flexible rifle for anything from hunting to law enforcement or military use.  Magpul’s accessory items and magazines are a sure hit when used with the Mod 1.

Since the rifle’s inception in the late 1950s, the M16 was far more accurate than it was given credit for.  With time it has gotten better and better.  ArmaLite continues its legacy of innovation and development of modern and futuristic firearms like the SPR Mod 1.  Westrom has made sure the focus of the original company has flourished.