Agencija Alan presented the latest and reportedly final version of the Type VHS assault rifle. This rifle is 5.56x45mm in a bullpup configuration using gas impingement and a rotating bolt head for lock up. While this final version has some external shape characteristics with “Le Clairon” - the French FAMAS F1 rifle - it is not a clone of that weapon system. The ambidextrous charging handle inside the oversized upper carrying handle, along with the adjustable grenade launching ring on the barrel, add to this similarity. (www.aalan.hr)

The 9th International Defence Industry Fair (IDEF) was sponsored by the Turkish Armed Forces Foundation under the auspices of the Ministry of National Defence on April 27-30 2009.  The show was held the Tuyap Fair, Convention and Congress Center in Büyükçekmece-İstanbul, Turkey, and had record turnouts.  The attendance was recorded at 42,789 visitors, of which 1,878 were from other countries.  The majority in attendance were Turkish military and procurement, and the foreigners were typically influential buyers and end users from over 96 countries.  There were 464 exhibiting companies from 45 different countries.  This, the 9th IDEF, shows remarkable growth from the already well attended earlier shows.  For example, the 5th IDEF in 2001 had 256 exhibitors from 30 countries, and official delegates were only there from 30 countries compared to the 2009 total of official delegates from 67 countries.  That is a significant growth, and the exhibitors who attend can expect not only to reach the Turkish military market, but many of the shakers and movers in the international scene.  Exhibition space, the “footprint” of the show, also increased by almost 30% from the 2007 show, to 20,000 square meters.

SADJ had a booth set up in a corner of one of the main buildings, and the thousands of magazines that we brought were quickly snapped up by attendees and exhibitors.  This, along with many conversations that we had with attendees, indicated a strong interest in small arms by many, and the flow of influential delegates gave us quality time with many of the people we had wanted to meet with.  That’s high praise for show management for bringing these quality delegates to the show and getting them out onto the floor meeting people.

Istanbul is an exotic city, with millennia of non-stop historical importance.  Centrally located to the crossroads of the Mideast, Asia, and Europe, Istanbul is the ideal location for IDEF.  Visitors to the city can expect to not only do business at IDEF, but to also experience an amazing place.  The Grand Market (Bazaar) has been in continuous operation since the 12th century, with its covered avenues and many shops dating back beyond current memory.  This sprawling city has thousands of places for the attendees to explore, and we recommend planning for several extra days in the area to do so.

IDEF receives our highest marks for a military show that features weapons.  The show was well designed, the attendees flowed through the entire show, management went all-out to ensure that the exhibitors had their needs filled, and the attendees were the targeted group.  Almost everyone we talked with was planning on setting up and attending at the 2011 edition of IDEF.

Aimpoint’s Comp M4 is a well established sighting tool in the world’s military and LE kit, providing up to 8 years of function off of one AA battery.

MKE from Turkey is claiming production of the MK19 40x53mm high velocity grenade machine gun, and had this example on the display. There were no contracts discussed, and this appeared to be an R&D program. 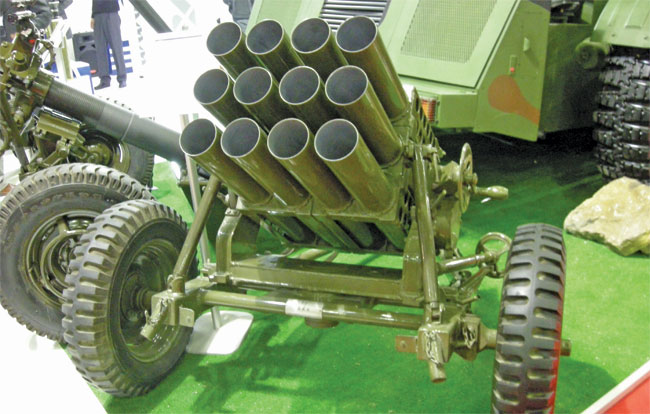 MKE’s 107mm multiple rocket launching system has 12 reloadable tubes and weighs 435kg unloaded. The system is able to be broken down to man-portable sections. (www.mkek.gov.tr) 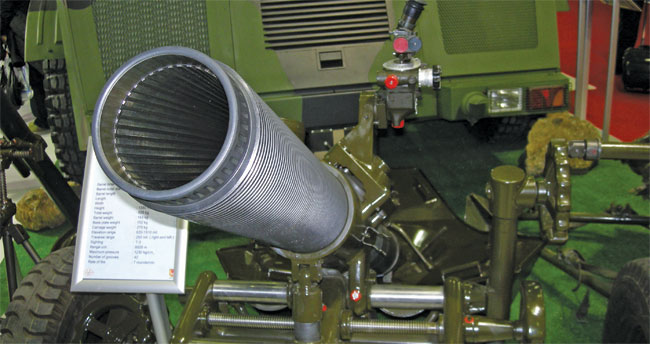 Inside the HY1-12 120mm mortar tube, showing the 40 grooves characteristic of this model.

Left to right: TLS 40 Target Acquisition Binoculars combines a long-range laser rangefinder, observation binoculars, GPS, digital compass, digital camera and digital voice recorder, integrated into a compact and lightweight package; (Center) The Nestor delivers numerous functions for day and night target locating and transmission of their exact positions to other personnel. This state-of-the-art system utilizes GPS to determine its own position. A digital magnetic compass enables the user to determine the direction to the target as well as the angle of elevation. Based on OPO (Optical Parametric Oscillator) technology, the integrated eye-safe laser rangefinder module determines the exact range to the target during all-weather, day or night conditions; and the Spotter 60 observation scope - three key features make this 20–60 x 72 spotting scope the ideal instrument for the observation and identification of objects, as well as target hit monitoring: high magnification (20x to 60x); a 72 mm lens and a Mil Dot reticle with continuously adjustable illumination whose size changes relative to the magnification level. (www.zeiss.com/optronics) 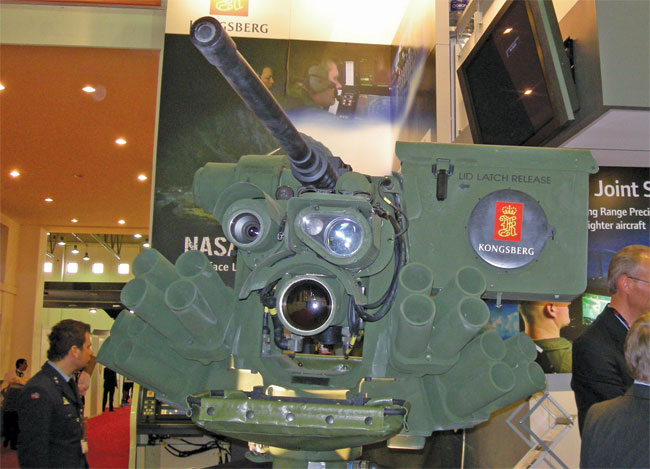 The Kongsberg Protector remote weapon station has over 3,500 units in service at present. Shown is the M151 small and medium caliber system, with M2HB .50 BMG (12.7x99mm) machine gun mounted. It could just as easily have been a 40x53mm MK19 or equivalent, or 7.62mm platform like the M240. The Day/Night, Thermal optoelectronics allow for the operator to sit in relative security inside the vehicle and utilize the Detached Line of Sight (DLOS) capability to operate from an unexposed environment. The Protector is becoming a service standard in many countries. (www.kongsberg.com)

Raytheon was exhibiting their Stinger Missile, the Wireless TOW Missile, and the Javelin Close Combat Anti-Armor Weapon System. The Javelin provides a lightweight, portable, individual/team operated anti-armor/bunker capability out to 2,500 meters. The tandem shaped charge utilizes a double stacked charge system with a smaller precursor charge to the front for defeating reactive armor, the second, larger charge then penetrates the armor. (www.raytheon.com) 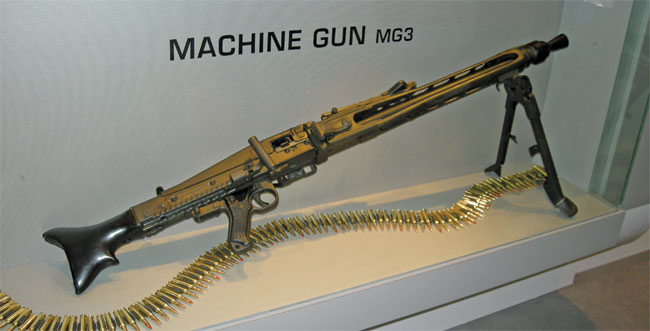 The approximately 60 divisions of the Pakistan Ordnance Factories were well represented at IDEF 2009. For small arms, the POF product line included their versions of the HK family of weapons, with indigenous reworks including new plastic magazines and optical adjustments. The new improved PG-9 round for the SPG-9 73mm was on display as well. (www.pof.gov.pk)
by Dan Shea on 14 October, 2011.
Tags: 2010, Dan Shea, V2N3, Volume 2
← FIDAE 2010
Industry News: Volume 2, Number 4 →
Distributed at trade shows worldwide, Small Arms Defense Journal is a bimonthly publication that focuses on small arms, accessories, gear for the soldier, new products, industry news, and defense trade shows. The first issue of SADJ was Spring 2009, which launched at the LAAD show in Rio de Janeiro, Brazil. SADJ (pronounced “sage”) is targeted toward military, law enforcement, and defense industry professionals. Our job is to reach these groups and tailor content to their interests while producing a publication that is applicable to an international audience.