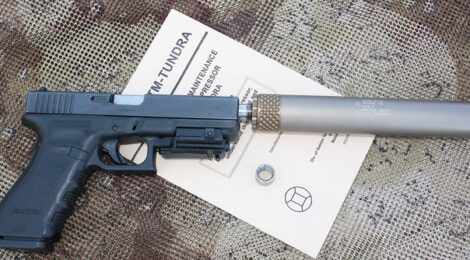 Weighing in at only 7.2 ounces including the recoil device and with a diameter of only 1.25 inches, the Gemtech Tundra more resembles a rimfire suppressor than a 9mm suppressor.  If it first seems a little small for the task at hand, any initial skepticism is overcome as soon as the first round is fired.

The suppressor received for testing and evaluation was mounted on a Glock Model 17 as a host firearm.  Since the factory Glock 17 doesn’t have a threaded barrel we consulted with Lone Wolf Distributors of Oldtown, Idaho, USA.  A threaded, drop-in replacement, stainless steel barrel was selected and installed.  Lone Wolf is one of the few Gemtech recommended barrel manufacturers for suppressor mounting.

Even with the small diameter of the suppressor, the factory sights are slightly obstructed.  With very little practice the factory sights can still be used with great effectiveness due to the low profile of the Tundra.  Nevertheless, we chose to mount a Green LaserMax Unimax laser sight to the factory rail in front of the trigger-guard on the pistol.  The combination of the laser and the factory sights make fast target acquisition a simple process. 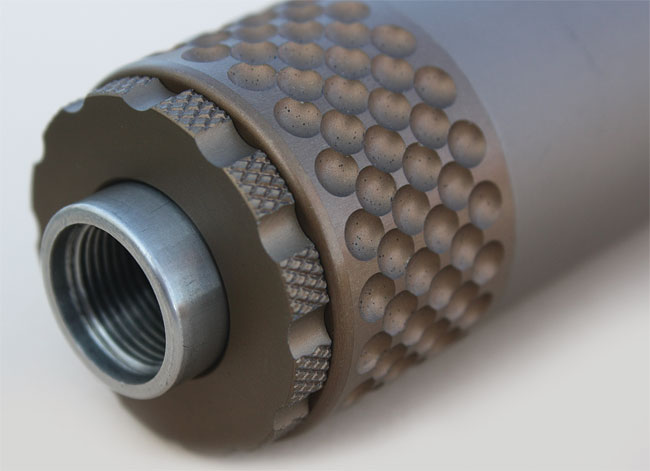 The Gemtech LID-8
One of the most visually distinguishing characteristics of the Gemtech Tundra is the “divoted” grip-area at the rear of the suppressor, which resembles the pattern on a golf-ball.  This section is machined to allow users the ability to tighten or adjust the suppressor with heavy gloves or in wet or slippery conditions.  This grip-area is directly above the Linear Inertial Decoupler (LID-8).

Since many semiautomatic firearms are based on the Browning design where the barrel tilts on unlocking, it has historically been a challenge to overcome the extra weight and tension placed on the end of the barrel by installing a suppressor.  As finicky as some of these firearms can be with specific types of ammunition, magazines, springs, or even heavy use or poor maintenance, something attached to the barrel itself can be a fairly big hurdle to maintain reliability.

In the past, recoil boosters, often referred to as Neilson Devices, have been used to counter the additional weight and drag created by adding a suppressor to the barrel of this particular firearm design.  The Neilson Device is used to increase the recoil energy of the firearm to “force” everything back into alignment and function properly.  It accomplishes this task by utilizing a “piston” on the end of the barrel and acting like hammer.  Although these have worked very well for several applications, when not properly installed or correctly “tuned,” the additional recoil has the ability to damage the firearm.

The Gemtech LID-8 uses a different principal to aid in overcoming the additional weight and mass of the suppressor.  Without the aid of a piston or a necessary “hammering” to keep everything in alignment, the LID-8 actually allows the suppressor to momentarily free-float after firing, and disconnect from the inertia during the unlocking and locking sequence.

Although the function of the LID-8 is extremely effective and sounds quite complicated, the mechanism is simple to use and maintain, and even offers an additional advantage: The LID-8 can be indexed with absolutely no tools to fine-tune the accuracy of the pistol/suppressor combination.  Since adding sound suppressors to a barrel (or adding any muzzle devices for that matter) have the ability to affect the point of impact, it creates a situation where a firearm may need additional sight adjustment when the device is added.  In extreme cases with some devices, the point of impact shift can be so severe that a different point of aim is necessary to compensate for it. 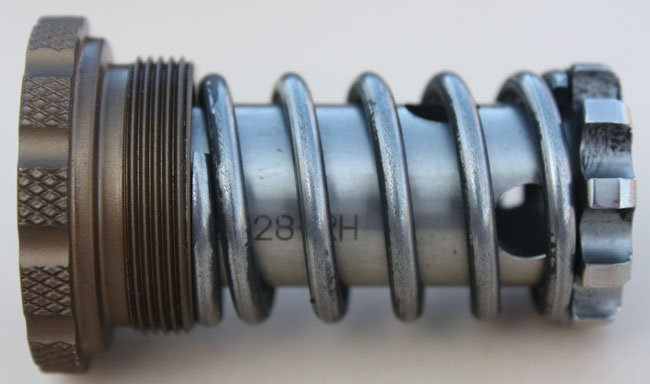 Ammunition
While the effectiveness of a suppressor is truly realized when used with subsonic ammunition, we opted to shoot two popular types of ammunition during our testing.  The first was the standard commercially available Winchester 115-grain FMJ, which represents a popular round, used by recreational shooters or heavy shooters where budget is a factor.  Often available in 100-round bulk packs, it functions well in most pistols and is reasonably priced.  Since it is not a subsonic round it is not nearly as quiet as the heavier ammunition, but we found it to function without failure and firing with the absence of hearing protection was comfortable and well below the threshold of pain.  The second type of ammunition utilized was standard 147-grain Federal Hydra-Shock.  We wanted to test the effectiveness of a truly subsonic round as well as the performance and function of this popular hollow-point.  It was extremely quiet and also functioned without failure of any type.  The Tundra was tested both “dry” (as designed for) and “wet” by adding a commercially available suppressor coolant.  Performance in every capacity was exceptional with both methods.

Conclusion
The Gemtech Tundra is not only well designed and effective; it is small and light enough to keep the end user quite aware of its exceptional performance.  It is well balanced, and comfortable when mounted, and the ability to index the Gemtech LID-8 for additional, fine-tuned accuracy only adds to an already impressive system.  The fact that absolutely no tools are necessary for disassembly, maintenance, cleaning or even changing the LID-8 for different firearms is a benefit that should not be overlooked.  With all ammunition used, both wet and dry, everyone present who had the opportunity to test the Gemtech Tundra expressed it was a positive experience.  After handling the Gemtech Tundra it is no surprise that it has already been purchased and placed in use by the U.S. Army and other Government Agencies.  Although we chose a Glock Model 17 for our testing platform, the Tundra is available for Beretta, Smith & Wesson M&P, SIGs, HKs and other popular combat handguns.  No matter what your capacity or necessity for a compact, effective 9mm sound suppressor may be, the Gemtech Tundra will not disappoint.

by Jeff W. Zimba on 15 August, 2011.
Tags: 2009, Jeff W. Zimba, V1N2, Volume 1
← Industry News: Volume 1, Number 2
Perception Meets Reality: The 2009 Enhanced Carbine Program →
Distributed at trade shows worldwide, Small Arms Defense Journal is a bimonthly publication that focuses on small arms, accessories, gear for the soldier, new products, industry news, and defense trade shows. The first issue of SADJ was Spring 2009, which launched at the LAAD show in Rio de Janeiro, Brazil. SADJ (pronounced “sage”) is targeted toward military, law enforcement, and defense industry professionals. Our job is to reach these groups and tailor content to their interests while producing a publication that is applicable to an international audience.