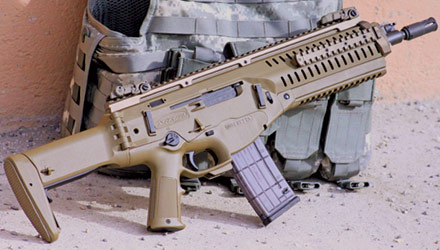 The “SF” suffix stands for “Special Forces” and designs the version of the ARX160 known in the United States as ARX160A2.  Leaving intact the operating system, Beretta refined its polymeric assault rifle in many aspects.

Afghanistan, November 13, 2011: A gang of armed Taliban terrorists hold 18 hostages in the Kabul offices of Esko International, a North American company specializing in food distribution.  Task Force 45, the intervention unit of the Italian Armed Forces composed of elements taken from Italian Special Forces units; storm the building in a well coordinated, multidirectional, simultaneous attack.  The raid of TF45 ends with the liberation of all the 18 hostages and the total elimination of all the terrorists winning attention and praise from the international Special Forces community for the perfect way they executed their mission.

Task Force 45 enjoys the same status as the U.S. Navy Seal’s Team Six or U.S. Special Forces Detachment Delta and officially does not appear in any order of battle of the Italian Armed Forces.  It’s silent, efficient group of highly trained soldiers that quietly works out of the sight and the glamour of information media to hit the enemy or rescue civilians or their own comrades in danger.

These gallant warriors in 2009 issued their specifications to Beretta to modify the new ARX160 to meet their own needs.  Beretta responded to the challenge giving birth, in 2010, to the ARX160SF.

The ARX160SF inherits the operating system from the infantry version of the rifle.  It’s a self adjusting gas operated rifle with a unique system halfway between a short stroke and long stroke gas piston. ARX160SF flashider. Different from the infantry version, there are no integral compensator ports – only upward slots.

The Bolt Group
The ARX160SF bolt group is made of two components: the bolt body and the bolt carrier.  Both components are built using CNC tool machines from high resistance steel bars, requiring complex processing and a careful quality control on dimensional tolerances to ensure the strictest uniformity of each piece and interchangeability.

Once assembled, they will be kept together for normal weapon maintenance, thus reducing the number of pieces the soldier has to handle when cleaning his rifle and keeping simple the logistic chain.

Permanently attached to the rear of the bolt carrier is the recoil spring with the spring rod that ends with a polymer block that engages the notches in the body of the receiver, keeping the bolt carrier group in its position inside the weapon. The bolt has a bolt head with nine locking lugs, similar to those ones of the Stoner systems.  The lugs at the three and nine o’clock position are integral with the two extractors.  This is another unique feature of the ARX160 family: two extractors operated by two rods that run through the bolt body and protrudes to the rear complete with springs that keep the extractor in the right position.

The Barrel
While the ARX160SF can mount, like the infantry version, both barrels of different length (normally, the ARX160 is delivered with two barrels, one 12-inches long and one 16-inches long) chambered in 5.56mm NATO, the ARX160SF mounts usually the shorter one.  The version tested is the most recent, different from the version presented in 2010, and has the flashider modified to mount a sound suppressor made for Beretta by Brugger & Thomet.  The barrel is made from a high resistant steel bar and realized by a cold hammer forging process.  The barrel is chrome lined to increase barrel life and the rifling is the usual 1:7-inch RH twist according to NATO standards for use of the SS109 military cartridge.

Just after the bayonet lug, at the beginning of the 12-inch barrel, are the gas port and piston (on the 16-inch barrel the gas port is almost half way).  The telescopic piston extends when the bullet passes over the gas port and gas pushes it out backwards pressing the op-rod integral to the bolt carrier.  The full extended piston protrudes for a considerable length, comparable to the size of a 5.56 brass case.  The piston does not give only a simple “impulse” like short stroke systems, but it keeps going on pushing the operating rod of the bolt group, allowing a smooth, continuous action that greatly helps reliability and the case extraction and ejection process during the shooting cycle.  In this the ARX160 gas system is similar to long stroke systems.  The piston is in no way permanently connected to the bolt group operating rod, and this is a characteristic peculiar of the short stroke systems. The safety and fire selector of the Beretta carbine has only three positions. The 3-round burst, present in the AR70/90, has been eliminated. The hole behind the flat sling mount is to reverse the ejection direction.

Beretta took the best from both systems merging them in what it seems the most efficient way.  The absence of permanent mechanical link between piston and bolt group allows also one of the most interesting characteristics of this assault rifle made in Gardone Val Trompia: to change the barrel literally in a matter of seconds without the need of any tool.

The barrel ends on the breech side with a barrel extension similar to the Stoner locking systems provided with nine notches for the bolt locking lugs and, at the bottom of the barrel extension, two feeding ramps.

The barrel is locked to the action with a latch operated by two sliding cursors on both sides of the rifle body: to remove the barrel the shooter should open the bolt and lock it open, to slide down the cursors, disengage the gas valve from the opening at the front tip of the handguard and pull out the barrel.

To remount the barrel, or switch it with another barrel, the shooter just has to follow the sequence in reverse order.  Quick and simple.

This feature, and other ones Beretta R&D included in the AX160, as we will see later during the range test, allows the Beretta ARX160 to have maximum flexibility in configuring the rifle according to operator need.

Upper Receiver, Stock & Rail System
The ARX160 body has been realized in the same reinforced polymer as used in the aerospace industry, but to meet Italian SF requirements the color has been changed from the dark gray of the infantry version to the current tan.

The design of the body has been modified in many little details.  For example, the rail under the front handguard has been changed: in the infantry version there is only one rail with two different portions, the front portion was a classic Picatinny Mil-Std 1913 rail, to allow the shooter to mount the needed accessories: front handle, tactical light or other items, while the rear portion was a proprietary T rail to mount the UBGL (Under Barrel Grenade Launcher), the 40mm GLX160.