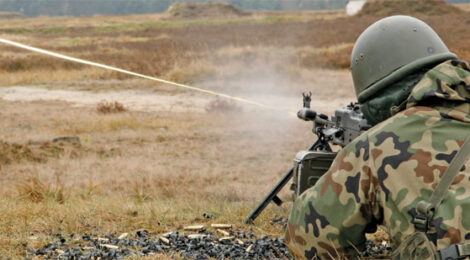 UKM-2000: The Polish Successor to the PKM 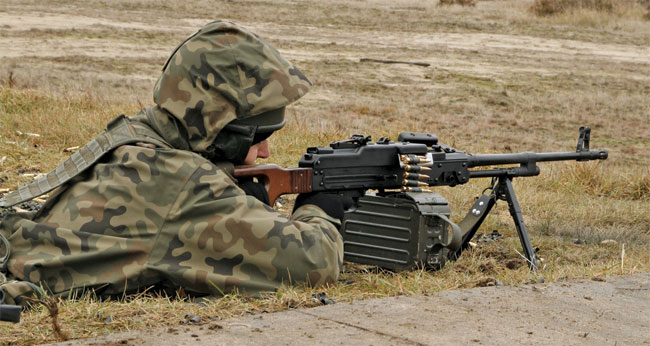 A machinegunner of the Polish 16th Air Assault Battalion preparing to open fire at the Wedrzyn Training Ground pop-up target range. Note the obvious outer resemblance of the UKM-2000P to the PKM. Other than a slight change of receiver contour, only the cartridge belt with M13 links sticking out of the feed-opening reveals the change from a distance of just several paces. (MSgt Mariusz Bieniek, 16th AABn Combat Camera Team, Polish Army, November 9, 2010)

Entering NATO made the Polish Army face an uneasy choice of new armament, poised to function under totally different strategic, tactical – but most importantly logistical – circumstances.  New small arms chambered in Western calibers were mostly based on hitherto used Soviet models.  One of these time-proven Soviet era small arms to be given a new lease on life was the highly successful PKM/PKMS machine gun.  In contrast to the Beryl family of Kalashnikov-based 5.56mm rifles, “Westernization” of the PKM took much more than a face-lift and different chambering.

In the mid-1960s, Warsaw Pact nations started a generations shift in small arms, replacing the hitherto manufactured Goryunov SG43 (and modified variant, the SGM) medium machine guns, designed and introduced in the final stages of the World War II with modern General Purpose Machine Guns.  These were of course not the offspring of the Space Age, but a development of the German concept of Einheitsmaschinengewehr, (EMG) or Universal Machine Gun, stemming from World War I, when the first such weapon, the MG 16 was designed – but never fielded by the Kaiser army.  The EMG concept was not particularly suited to the Maxim guns of the era, so it was not until 1930s that the concept was really introduced and resulted in two of the most influential machine guns of the 20th Century: MG 34 and MG 42.  After these two hit the field, no army in the world was able to ignore the concept any longer, and the GPMGs took off like a bush fire.  The MG 42 (in its many guises: as MG 42/59, MG1, or MG3) still soldiered on, joined in the late 1950s by the likes of MAG 58, Czech UK59 and the U.S. M60.  The Soviet Army did not turn a blind eye towards the new trend as well, and in the late 1950s staged a contest for a new style GPMG.  In 1961, the Izhevsk team headed by Michail Kalashnikov of the AK fame was declared a winner.  The new gun was called simply the PK or Pulemyot Kalashnikova – Kalashnikov’s Machine Gun.  Despite the novel design, the Russians still clinged to the obsolete doctrine: i.e. the concept of a unified gun was welcomed, as it made logistics easier, but light and mounted guns were still treated as separate weapon systems on separate tactical levels.  The actual gun thus become a key-part of the two weapon systems called PK and PKS – with PK being the light machine gun version, and PKS (S for Stankovyi, meaning mounted) was the medium machine gun guise.  The mount was no longer the Russian-standard wheeled mount, but a tripod, already a concept introduced with the modified SGM Goryunov MG, mounted on a Malinovski tripod, easier to pack into the cramped confines of an armored personnel carrier. 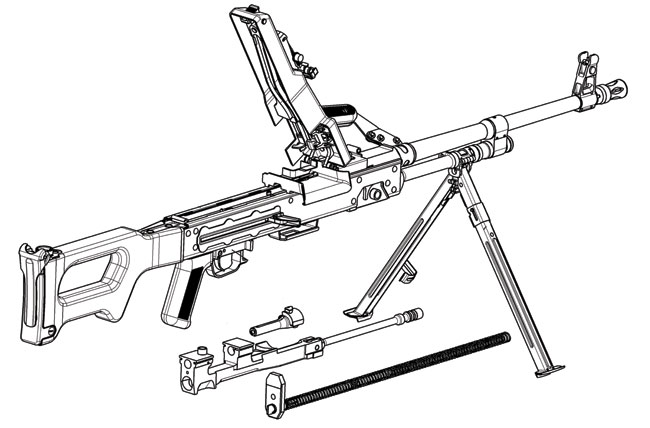 Polish PK/PKS
That’s why Poland initially got only the PKS variant license with the 6T2 Stepanov mount in May 1966 to replace the ageing SG43s still used in the MMG role by the Polish Army.  The licensee was the Hipolit Cegielski Mechanical Works in Poznan (HCP or No. 6 Mechanical Works), specializing in rifle-caliber machine guns.  Other PK system components were licensed soon, in October, after the COMECON (Council of Mutual Economical Assisstance, the Eastern Bloc’s “common market”) decided that Poland would specialize in tank machine gun production for all of the Warsaw Pact armies.  License for the PKT, (Tankovy, or the tank model), along with PK and PKB (Bronetransportyorny – for APCs, an APC model used also on helicopters as door gun), were introduced as well.  The PKT got the highest priority, as the joined Warsaw Pact project, and was first to be manufactured, as early as May 1968.  The PK manufacturing started in December of the same year, but was terminated as early as 1974.  The PKS, completed with Wifama of Lodz-made 6T2 mounts, only appeared in 1969 – and was also terminated in 1974.  The reason for that was that in 1973 the license was already bought for the modified PKM/PKMS model.  It should be noted here that originally the PK was to be an export-only model.  Polish infantry was to replace the obsolete DP and DPM LMGs with intermediate-caliber RPD (planned to be followed soon by RPK) as per the Soviet model, with the PKS replacing the SG43 in machine gun platoons at a battalion level.  Around 1970 the General Staff decided to part with the Soviet model and retain the rifle-caliber machine gun support at the squad level, introducing PK/PKMs in a truly GPMG fashion, issuing a tripod mount with the PK of the 3rd squad in each platoon, designated as a support platoon.  This move allowed the Polish infantry to retain additional firepower and was later to some extent copied by the new Soviet tactical doctrine in the 1970s after new 5.45mm intermediate round replaced the original AK ammunition – but augmented still by retaining intermediate-caliber automatic rifles (RPK 74s) as well, and not replacing them altogether.  Now that the PK was here to stay, it made more sense to introduce the modernized, improved model as soon as practicable – hence the move to PKM.  The modernized PKM went into mass-production in October 1974, followed by PKMS a year later.  As was the case with PKT, these were retained in the company’s production range right until HCP ceased military production in 1990s.  The new mounts, a flimsy aluminum sheet affair called 6T5 with which the Poznan-built PKMS were completed, were imported though – at first from Hungary, and then from Rumania.

The manufacturing rate was never overwhelming with several thousand units a year at best.  The “S” (or Special) production (read: military equipment) was never a core product of the HCP, which specialized from pre-war times in railway stock and huge maritime engines.  At the threshold of the new era, after Communism fell, the military production was deemed “Stalin’s Vengeance” or ball-and-chain dragging the feet of the factory’s development.

Winds of Change
The events of 1989 turned the geopolitical and economical environments of Europe upside down.  In 1991 both the Soviet Union and Warsaw Pact were dissolved and in March 1992 NATO’s Secretary General Manfred Wörner “opened the door” of the Pact for the former Warsaw Pact countries.  In 1993 the last Russian soldier left Poland and on July 5, 1994 Partnership for Peace linked Poland to NATO and promised full membership by the end of decade.  Faced with these, the General Staff ordered unification of ammunition types between the Polish Army and NATO, triggering a revolutionary changes in logistics system – a move towards Western calibers after 50 years of using and manufacturing of the Soviet ones.  The 7.62x54R, 7.62×39, 9×18 and 12.7×108 became “interim, obsolescent” rounds overnight, the 5.45×39 became “obsolete” and was to be withdrawn just years after it was finally introduced after a decade of preparations, while 9×19, 5.56×45, 7.62×51 and .50BMG became new standard rounds.

Machinegunner of the Polish 16th Air Assault Battalion shooting a standard mix of 4-Ball-to-1-Tracer at the pop-up targets range on Wedrzyn Training Ground in Poland during training preparatory for deployment to Afghanistan, November 9, 2010. Note how far the UKM-2000P throws the empty ejected cartridges – the bolt-carrier shows a lot of surplus energy. With PKM-style under-receiver clip-on belt box for 100 rounds it is mostly wasted; but it is aptly harnessed in an AFV-mounted UKM-2000C where the gun has to drag a 500-round continuous belt from the ammo magazine in the turret. (MSgt Mariusz Bieniek, 16th AABn Combat Camera Team, Polish Army)

PKM-N, or NATO-ized PKM
HCP at first tried to ride the new wave by introducing a PKM modified to fire the 7.62×51 NATO round.  The scope of the modification was very modest: limited to the barrel with a new chamber, new bolt with smaller bolt-face and modified extractor, new feed tray and modified ejector.

In September 1996 this “economy” modification was type-certified and offered to the military as PKM-N (not to be mixed with older PKMN, meaning PKM with tritium night sights).  “Dash N” added to the designation meant “NATO-caliber” variant, just like, for example, the Pallad-N, the underbarrel 40mm grenade launcher re-chambered for NATO-standard LV ammuniton, such as 40×46 NGO-N, replacing the older 40×47 NGO round.  The limited scope of the modification was chosen precisely in order to please the conservative military decision-makers who wanted to limit the fuss to the minimum and modify the time-proven PKMs by just swapping parts.  It is not known today, why then the military decided that it wanted an entirely new machine gun instead.  This was highly unusual, but nowadays we can’t help but think it was a very fortunate thing, as the UKM-2000 would never see the light otherwise, and the Army would end up with the same problem it has with the WKM-B – but already at squad level.  The WKM-B is a result of the same idea as with PKM-N: it is a Polish-built NSV heavy machine gun, re-chambered for the NATO-standard .50 BMG, but still fed from the old NSV-style belt, which means that in Afghanistan, when these HMGs are deployed with the Polish Army as vehicular weapon, the ISAF logistic chain supplies .50 BMG ammunition in M9 links (ironically, Polish-manufactured and linked as per NATO standard), which has to be de-linked and re-loaded in NSV belts prior to use.  The problem is that the NSV is a direct feed weapon, unlike the M2HB, and it can’t be suited to fire ammo in the closed M9 links.  Perhaps it could be made to function with the M15E2 link for the M85 tank machine gun – but these are long obsolete.  If the PKM-N was introduced, the hapless machine gun crews would also have to re-belt the 7.62×51 supplied in factory-loaded M13 links.

UKM-2000
After the PKM-N was rejected by the army, in late 1998 the Military Technology University (WAT) in Warsaw started the design of the far more modernized version of the PKM, already dubbed UKM-2000 (UKM is abbreviation from Polish “uniwersalny karabin maszynowy” and means GPMG, 2000 was a projected year of completion), along with Polish versions of the 7.62×51 NATO ammunition and M13 links.  The machine gun was designed in co-operation with the HCP, the ammunition was co-designed with the Mesko of Skarzysko-Kamienna, Poland’s sole small arms manufacturer, and the M13 links were prepared in close cooperation the Pressta Metal Pressings of Bolechow, an ex-HCP subsidiary specializing in artillery casings and sheet-metal packaging.  The WAT machine gun team consisted of (then) Maj. Ryszard Wozniak, Cpt. Miroslaw Zahor and 1st Lt. Robert Kaminski, with Mr. Jerzy Stefaniak, Krzysztof Robak and Marek Morawski of the HCP.  The prototype machine gun was fitted by a long-time HCP fitter, Mr. Marek Kmieciak, and test-fired under supervision of Mr. Ireneusz Ignasiak, factory test-shooter for over a quarter of a century.  The Tactical & Technical Requirements were created by WAT and coordinated in a somewhat lengthy process with the Armaments Policy Department of the Ministry of National Defense, the Planning and Development Directorates of the General Staff, as well as the P-4 Material and Technical Directorate of the Logistics Office, Land Forces Technical Command, Land Forces Armored and Mechanized Infantry Command and the Military Ordnance Materiel Institute.