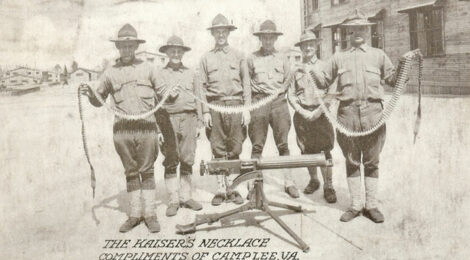 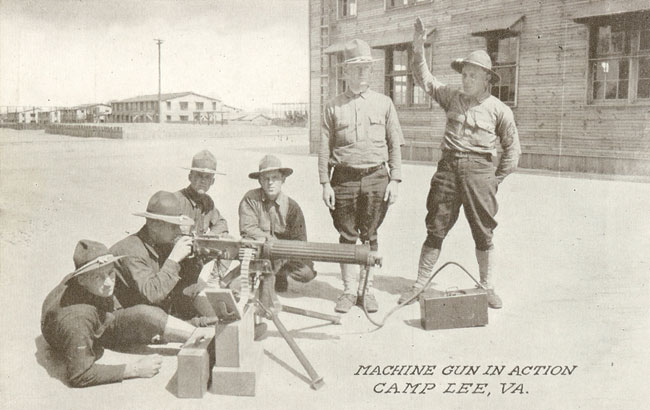 U.S. soldiers train at Camp Lee, Virginia in August 1918 with the Colt Vickers.

By the end of World War II, Great Britain had not been invaded and war production of British Vickers was at an all time high.  British Vickers production guns that had been retired from active service replaced the Colt Vickers in use by the Home Guard.  After the war, Great Britain offered to return the guns to the U.S., but since the gun was declared obsolete, the U.S. didn’t want them.  With no need in the U.S. or Great Britain, the guns were unceremoniously destroyed and dumped into the North Sea.

In 1916, the Colt factory accepted an order through the British Government for the manufacture of a Russian Maxim Machine Gun, otherwise known as the Russian Vickers.  The Colt company made up quite a number of the guns in the 7.62x54R Russian caliber and found them to function perfectly.  In the meantime, before delivery could be made, the revolution in Russia terminated further work on these guns, which then lay in storage in the U.S.  Early in 1918, a demand came from the Ordnance experts in France for an 11mm gun especially designed for balloon work.  The Colt factory found that the Russian Vickers, then on hand, could be altered to take the larger caliber cartridge.  So it was that these Vickers were altered into 11mm caliber to augment the production of Model 1918 aircraft guns.

The 11mm cartridge was known as the French Desvignes cartridge, a development of the French Ordnance Department.  The heavy 11mm bullet could carry a much larger charge of incendiary material than the smaller caliber rifle bullet used by the warring nations and so was more effective against the envelope of a gas balloon or dirigible.  In the smaller bullet the burning core did not last long enough after leaving the gun to set fire to the hydrogen gas of the balloon bag.  Instead the result was simply a small round hole instead of a burning balloon.  About 1,200 of these Model of 1918 11mm Vickers were delivered before the Armistice. 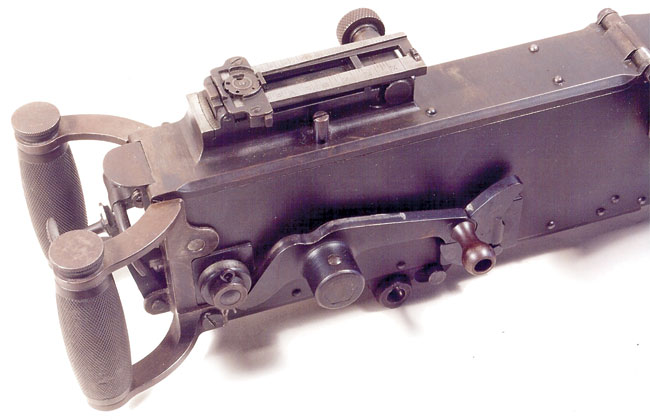 The U.S. Colt Vickers was a licensed copy of the British Vickers Mk I. While the Colt Vickers appears at first glance to be identical to its British cousin, there are some subtle differences. The Colt Vickers had plastic spade grips and a rear sight that was the same as the sight used on the Browning Model of 1917. The sight pictured here is the early version which was graduated to 2,600 yards. Later versions were graduated to 2,800 meters.

Since most of the U.S. stock of Colt Vickers Model 1915 were sent to Great Britain, who ultimately destroyed them, it makes unmodified or unaltered original infantry model Colt Vickers Model of 1915 machine guns extremely rare today with maybe two dozen or so examples in private collections.  I say unmodified or unaltered because after World War I the Colt Vickers Model of 1918 aircraft guns the government had left disposed them on the open market and could be bought for as little as $7.75 each.  Since these guns were of the same basic construction and design as the ground infantry gun, and spare parts were available, a number of dealers modified these M1918 aircraft guns into the M1915 ground infantry configuration.

Some of the conversions are obvious and others will need a well-trained eye to detect.  Things to look for include seeing if the air-cooling louvers on the jacket of the aircraft gun have been closed up and welded.  (A flashlight and a mirror may be needed to check on the inside of the water jacket to see if this was done.)  If the entire end cap and jacket have been replaced with an infantry end cap and water jacket then check the serial number located at the bottom of the end cap and see if it matches the serial number located on the inside of each side plate and on the bottom of the trunnion block.  (The number on the top of the end cap is not the gun serial number but an army control number.)  Other things to look for include having the correct top cover with the same sight as is found on the Browning Model of 1917 and the spade grips should be made of plastic, not wood.  And, among the finer points, look to see if the gun had ever been deactivated by having the side plates deformed or cut and welded back together and look at the rivet heads on the side plates to see if they have been removed, replaced or reseated. 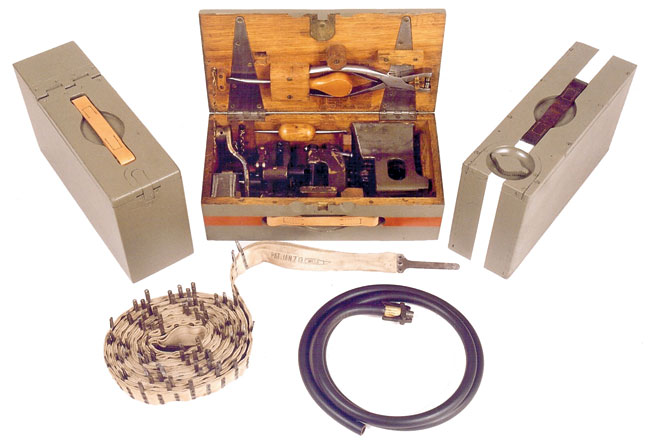 Accessories for the Colt Vickers Model of 1915. At the left rear is the top opening wood ammunition box with leather handle. This was the same box that was used for the Colt Maxim Model of 1904 except those boxes initially had metal wire handles. The capacity of the box was one belt of 250 rounds. In the center is the belt loading machine identifiable by a red stripe around the box and on the right is the tin lined water box identified by the white stripe. Both the belt loading machine box and the water box are of the same external dimensions as the ammunition box. On the bottom left is the 250 round canvass and brass belt made by Mills as used by the Colt Vickers. The markings on the belt have a patent date of Jan. 7, 1913. These were the same belts as used by the Colt Maxim Model of 1904. On the bottom right is the steam condensing hose.

The U.S. Colt Vickers is essentially a licensed copy of the British Vickers Mk. I.  Obvious differences are the barrel, lock and feedblock to accommodate the U.S. cartridge.  The muzzle booster does not have the armored cone attachment that became standard on the British model.  As mentioned above, the rear sight and spade grips are different.  The condensing hose is also the same as is used on the Model of 1917 Browning water-cooled, which is different than the British version.  But the main “first glance” visual clue as to whether U.S. or British made is the “Browning” type of rear sight.  The tripod is a copy of the British Mk IV tripod except the U.S. rear leg has a flattened “shovel” foot.

The Vickers design, an improvement of the Maxim design, has endured active military usage in the British armed forces for over 60 years and can still be found in use today in some third world countries.  That the United States actually made a good decision in 1915 to use this type of weapon as a stop-gap measure until the Browning was able to be fielded showed that while always late, it was better than never. 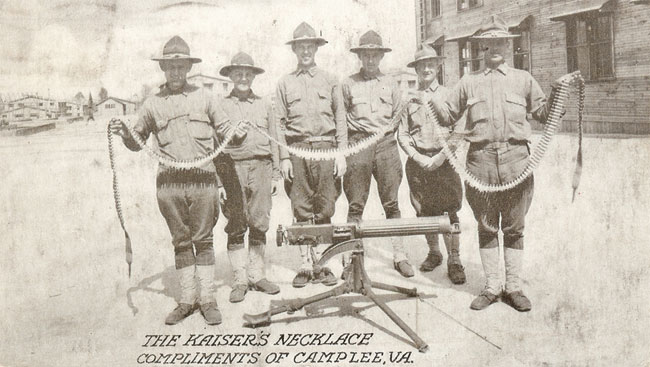 “The Kaiser’s Necklace” conveys the sentiment of the times. This postcard photograph from August 1918, from Camp Lee, Virginia shows six U.S. soldiers displaying a 250 round belt along with their Colt Vickers Model of 1915 machine gun.

*Note – The earlier guns were equipped with sights graduated in 2,600 yards.

Tags: 2011, Robert G. Segel, V3N1, Volume 3
← Modern Day Marine 2010
MSPO 2010 →
Distributed at trade shows worldwide, Small Arms Defense Journal is a bimonthly publication that focuses on small arms, accessories, gear for the soldier, new products, industry news, and defense trade shows. The first issue of SADJ was Spring 2009, which launched at the LAAD show in Rio de Janeiro, Brazil. SADJ (pronounced “sage”) is targeted toward military, law enforcement, and defense industry professionals. Our job is to reach these groups and tailor content to their interests while producing a publication that is applicable to an international audience.