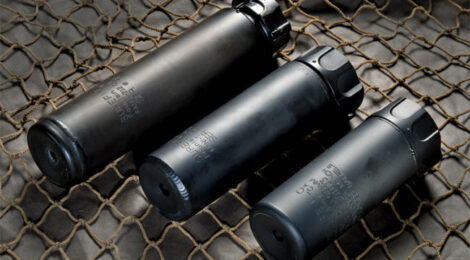 All SureFire suppressors attach over the muzzle of an AR-15/M16 (shown here on an M4) via a muzzle brake/flash hider that replaces the factory bird cage flash hider. The amount of muzzle over-hang varies with the overall length of the suppressor. The Micro was designed specifically for 2.0 inches or less muzzle over-hang and that’s what it has: exactly 2.0 inches.

Please don’t call SureFire’s latest “muzzle devices” a sound suppressor.  Cans they are not, even though they do reduce the decibels of a gunshot.  Elementary suppressor science— that pertaining to a cartridge’s gas volume and a suppressor’s internal volume— is violated by the California-based manufacturer of high-performance tactical illumination tools with their new Mini and Micro models, but the designs are an intentional compromise of sound reduction in exchange for size and weight.

SureFire has always manufactured products based on operator input, and the Mini and Micro models are classic examples of this philosophy.  An elite unit within the Special Operations community approached SureFire’s Barry Dueck, director of the Suppressor Division, and requested a muzzle device that would cut muzzle flash on a 10.5-inch Mk 18 while maintaining about the same noise reduction of SureFire’s trademark K-can (part number FA556-212).

Of course these operators aren’t running 14.5-inch M4s.  They employ either 10.5 inch Mk 18 SBRs or something even shorter.  Black ops being what they are, you never know for sure what the intended application of a short-length suppressor might be— but the Micro would definitely not ride on an M4.

What we do know is that the weapon’s overall length was the main driver in the development of the Mini and Micro models, coupled with flash elimination for night operations.  Reduced weight would be a very much foreseen consequence, resulting in faster target-to-target tracking and improved handling in an MRAP. 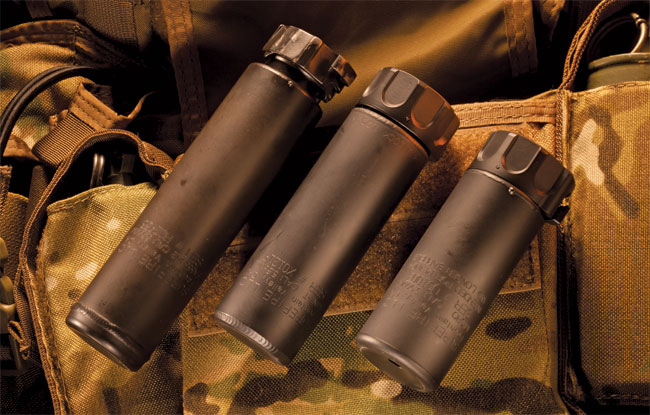 SureFire’s latest Mini and Micro models join the company’s previous lightweight champ, the model FA556SA, cutting substantial weight and overall length: (L to R) FA556SA tips the scales at 10 ozs. while the Mini comes in at 14 ozs. made of Inconel and 8.0 ozs. in titanium, lighter than even the Micro model, 12 ozs. and made of Inconel.

Does it matter?  Not really.  At least not to the guys who specified they want to barter noise for size.  An unsuppressed round of M855 measures about 170 of Mr. Bell’s eponymous units.  If a fully suppressed M4 clips the sound down to the low 130s, a gunshot from an SBR with a Mini or a Micro in the low to high 140s is not much worse than the cymbal clap at the end of the Star Spangled Banner.

The Mini comes in two materials, Inconel alloy or titanium alloy.  Inconel is a highly durable steel that’s popular with many suppressor manufacturers.  Inconel is a brand name of Special Metals Corp. and comes in a variety of formulations, all of which are oxidation and corrosion resistant in extreme environments.  The best attribute of Inconel is that when it’s heated, it forms a thick, stable, passivating oxide layer that protects the material.  Inconel maintains its integrity at extremely high temperatures – and suppressors get sizzling hot in a hurry.

Titanium is an element (atomic number 22) that is known for its strength-to-weight ratio.  It comes in more than two dozen commercial alloys and is a prime component in the aerospace industry.  The best thing is that it’s light as a feather yet strong as an anvil, so the SureFire Mini made of Inconel weighs 14 ounces while the same exact model made of titanium barely tips the scales at 8 ounces.

The tradeoff?  Titanium is expensive, it’s hard to machine and it’s not as long-lasting as Inconel.  The payoff?  A muzzle-heavy rifle is hard to swing dynamically from target to target but a Mini or Micro equipped AR swings like a dream.

The Mini and Micro feature the latest SureFire improvement to its lock-ring system of attachment to a mated muzzle brake adapter.  One could call this the Gen 3 lock ring as it’s the third distinctive method used since SureFire first manufactured a suppressor in 2002.

The first lock ring utilized a system similar to a Walker liner lock on a folding knife.  A metal tab “snapped” into place to prevent the locking ring from unloosening from the threads on the rear of the suppressor.  Gen 2 eliminated the spring tab and replaced it with a press-to-unlock tab.  The latest version that I call Gen 3 features an improved release latch with a lower profile.  This lower profile also decreases the chances of the latch accidentally releasing, should it be bumped hard, dropped or knocked around.  The new lock rings also feature user-replaceable parts so, should a repair ever be necessary, it can be made directly by the operator or armorer rather than requiring the entire unit to be sent back to SureFire. 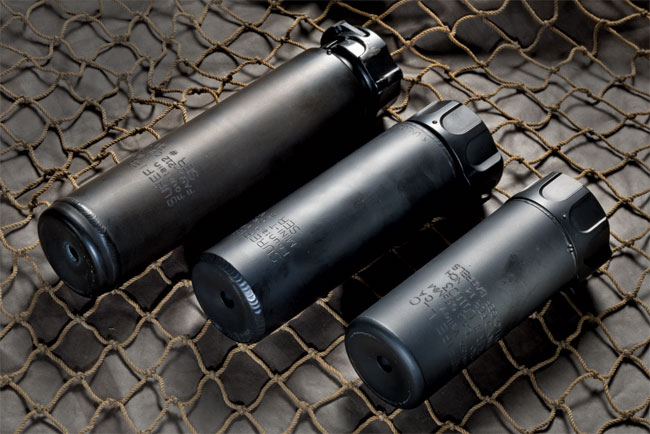 “These (lock rings) are also all backwards-compatible,” says Dueck.  “So you can have an old adapter and a new suppressor, same model, and it still fits.”

This is particularly good news for armorers in military and law enforcement where SureFire suppressors have been making impressive inroads.  One example: every Marine Corps M40A5 sniper rifle now comes standard with a SureFire MB762SF adapter and a SureFire FA762SF suppressor.  Not that SureFire makes a .308 caliber Mini or Micro, but the point is that their cans are gaining kudos wide and far in the U.S. military.

In fact, sources within the industry tell this author that SureFire product will soon be replacing AAC product as the issue-suppressor for FN’s SCAR system.  The competition has led to some contentions that will be played out in the end-user community and final contracts.  When the smoke clears, SADJ will bring you the report.

SureFire has been issued patents for its repeatable barrel attachment method of a muzzle brake/adapter interfacing with the suppressor via an eccentric locking ring that sucks the two together with in-line tension.  Threaded-on attachment methods are useless for securing two parts; threads serve only to align, not fasten.

The primary benefit of the SureFire attachment method is that a repeatable point-of-aim/point-of-impact is achieved.  Most suppressor brands cannot hold a repeatable zero from suppressed to unsuppressed, or even from attachment to removal to attachment again.  Not SureFire.  The engineers that developed high-intensity WeaponLights have also worked out how to make a rifle hold its zero – with or without a can.

SureFire suppressors are not inexpensive;  a SureFire can’s street price is around $1,300, not including a muzzle brake/adapter.

Surefire Blank Safety Device
How many times have tragedies occurred that seemingly “can’t” happen? The U.S. military adheres to strict safety protocols when training with real weapons and blank ammunition, yet someone is killed when a live round sneaks into a blue-on-red training exercise.

SureFire has addressed the problem of live ammunition in a blank-firing environment with a “safety suppressor” that looks just like the company’s real sound suppressors, but comes with a special “bullet capture” chamber to prevent a live round from launching a bullet in training environments.

Dubbed the BSD or Blank Safety Device, the bright yellow tube is made of solid aluminum with a steel “blow-out valve” to vent high pressure gases as the unit captures up to three projectiles. If you fire three live rounds into the BSD and still haven’t figured out that something is very wrong, the next one will damage your rifle and render it inoperable.

It works like this: the bottom of the BSD features an exhaust port sealed with a membrane. Should a live round enter the BSD, the gas pressure blows out the membrane and the shot is substantially louder than a normal blank. This provides an audio clue to the shooter that something is very wrong, coupled with a jet of flame from the bottom of the BSD to alert others that a live round has been triggered.

The BSD fits on any SureFire muzzle brake/adapter and can be fitted with a replaceable orifice to fit a standard GI birdcage.